To identify volatile constituents in Typhonium giganteum Engl., and clarify their effects on proliferation of breast cancer T47D cell lines. Volatile constituents in Typhonium giganteum Engl. are extracted by steam distillation, and determined by GC-MS. 24, 48 and 72 h after treatment of T47D cells with different concentrations of Typhonium giganteum Engl. volatile (DJL-V) constituents, methyl thiazolyl tetrazolium (MTT) colorimetric assay, inverted optical microscopic observation, flow cytometry (FCM) and agarose gel electrophoresis are used to detect cell proliferation and apoptosis. 15 major chemical constituents are isolated and identified from DJL-V, with a detection rate of 76.41%. DJL-V can significantly inhibit T47D cell proliferation in a time- and concentration-dependent manner within a certain concentration range, and can induce its apoptosis. T47D cell apoptosis rates are 7.51%, 13.45% and 13.79%, respectively, 24, 48 and 72 h after treatment with 100 g/L DJL-V. The degree of apoptosis is positively correlated with the time. 72 h after treatment, distribution of S phase (DNA synthesis phase) cells increases significantly. DJL-V has proliferation inhibitory and apoptosis inducing effects on T47D cells; and its anti-tumor mechanism is associated with the induction of apoptosis.

Typhonium giganteum Engl. is a plant in the genus Typhonium of the family Araceae, whose main medicinal part is dried tuber. In the 2010 edition of the "Pharmacopoeia of the People's Republic of China", its name is recorded as Bai Fu Zi, which is a common traditional Chinese medicine. The plant is distributed in most parts of China, mainly in places such as Henan, Gansu and Hubei. Typhonium giganteum Engl. is acrid, sweet and warm, which enters the stomach and liver meridians, and has detoxifying and mass-dissipating actions. It is used for stroke, phlegm obstruction, facial paralysis, unilateral or bilateral headache, rheumatism, pyretic arthralgia, tetanus, tumors and immune regulation[1-3]. Modern studies have found that Typhonium giganteum Engl. has curative effects on snakebites, scrofula and traumatic injuries[4-5]. In this paper, volatile oil is extracted from dried tubers of Typhonium giganteum Engl. by steam distillation, and analyzed by GC-MS technique. 15 chemical constituents are analyzed and identified.

Global incidence of breast cancer is rather high, which has shown a growing trend in recent years[6-8]. Use of chemotherapy drugs is one of the primary treatments of breast cancer, but existing chemotherapy drugs all have their respective shortcomings. So the search for effective novel anticancer drugs with small toxic side effects is of important practical significance. In TCM clinical practice, Typhonium giganteum Engl. has been widely used in the treatment of various malignant diseases[9-10], and has exhibited good curative effects. Treatment of breast cancer with Typhonium giganteum Engl. volatile oil (DJL-V) has never been reported at home and abroad. In this study, a variety of detection methods are used to observe the effects of DJL-V on proliferation, apoptosis and cell cycle of breast cancer T47D cells, and explore the basis for treatment of breast cancer by DJL-V.

Dried superfine Typhonium giganteum Engl. tuber powder was passed through a 200-mesh sieve. Then, 50 g was taken, added with 2000 mL of distilled water and 10 mL of n-hexane, shaken well, and steam distilled to give 2.1 mL of volatile oil, which was subsequently dried over anhydrous sodium sulfate to serve as the test sample.

Qualitative and quantitative analysis of DJL-V

After growing to logarithmic phase, T47D cells were seeded in a 96-well culture plate at 1×105 cells/mL at 190 μL per well, and cultured in a 5% CO2 incubator at 37oC for 4 h. After precipitation, the cells were treated with 10 μL of three different concentrations (50, 100 and 150 g/L) of DJL-V, respectively. Control group was added with 10 μL of sterile double distilled water; in addition, a nonapoptosis group was also set up. Each group had four wells. After culturing in a 37oC, 5% CO2 incubator for 24, 48 and 72 h, respectively, 20 μL of 5 g/L MTT was added, and the incubation was continued for another 4 h. Then, the supernatant was discarded, and the remaining was dissolved by addition of 150 μL of DMSO per well, then shaken at room temperature for 10 min, followed by measurement of OD value at 490 nm using a microplate reader. Growth inhibitory rate (IR) was calculated. IR = 1 - [(OD value of treatment group - OD value of apoptosis group) / (OD value of control group - OD value of apoptosis group)] × 100%. The above experiment was done in three replications.

Changes in growth morphology of T47D cells in the treatment and control groups after treatment with 50 g/L DJL-V for 24, 48 and 72 h were observed using an inverted microscope.

Observation of apoptotic characteristics by agarose gel electrophoresis in DNA ladder band test, cells treated with 50 g/L DJL-V for 24, 48 and 72 h, as well as control cells were taken at 1×106 cells/mL, and washed with phosphate buffered saline (PBS). After separately adding 250 μL of Tris EDTA buffer (TE, pH value 7.6), 250 μL of cell lysis buffer, 10 μL of proteinase K and 8 μL of ribonuclease A (RNaseA), the solutions were mixed well and left in a 37°C water bath overnight. After extracting once with phenol: chloroform: isoamyl alcohol (v/v/v = 25:24:1), the supernatant was added with 1/10 volume of 3 mol/L sodium acetate and 2.5~3.0 fold volume of cold anhydrous ethanol to precipitate DNA. After supernatant was removed by centrifugation at 12000 r/min, the remaining was washed once with 1 mL of 75% ethanol, and dried, followed by dissolution of DNA in 50 μL of TE. 10 μL of sample buffer was electrophoresed on 1.5% agarose gel for 1~2 h, then, DNA ladder band was observed under UV light.

After slowly adding 3 mL of -20oC precooled 95% ethanol to make the final concentration 75%, the solutions were the ice bathed for 30 min, and then stored at 4°C. FCM detection and analysis were completed with the help of the Central Laboratory of Sichuan First People's Hospital.

Data were analyzed and processed using SPSS 11.5 software, and statistically tested by ANOVA 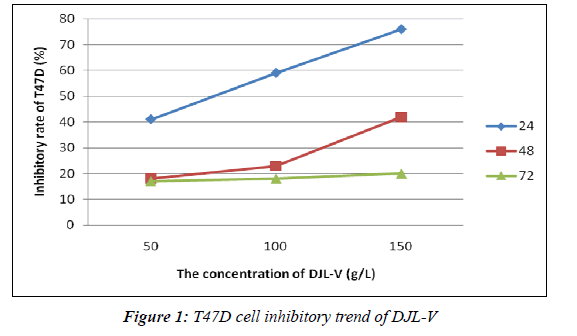 After treating with 100 g/L DJL-V for 24, 48 and 72 h, T47D cells underwent a series of changes. Control cell were dense, morphologically intact, round and transparent. DJL-V treated cells were evidently inhibited, and cell growth was slowed. With the increase of treatment time, number of cells per unit area decreased gradually, and cell-cell junction disappeared. T47D cells had reduced transparency and brightness, smaller size, became round, and were irregularly shaped. Foreign granules appeared within the cells, nuclei were pyknotic, and cell membranes were intact but foamy.

Results of FCM detection of cell cycle and apoptosis

In this study, GC-MS method is used for extraction and analysis of volatile oil in dried Typhonium giganteum Engl. tubers, which finds 15 major chemical constituents, accounting for 76.41% of total essential oil quantity. Among them, 8 constituents have relative percentage contents higher than 3%, and 3 constituents have relative percentage contents higher than 10%, they are hexanal (20.23%), 2-heptanol (14. 36%) and 1-octen-3-ol (11.21%). It can be seen from the analysis results that aliphatic compounds make up the largest part, while aromatic compounds only account for 10%, and terpenoids occupy a higher proportion than aromatic compounds, which is about 17%. Terpenoids contained are mainly sesquiterpenes and monoterpenes. Almost all of these terpenoids have important medicinal values or are widely used in perfumes and other chemical synthetic materials; for example, the application of camphor and menthol are very common; and β-caryophyllene has a good antiinflammatory effect[11-12]. Borneol has antispasmodic, deworming and expectorant pharmacological effects[13- 14]. In addition, azulenoids generally have antibacterial, antitumor and insecticidal bioactivities[15]. This paper provides the scientific basis for profound utilization of Typhonium giganteum Engl. plant resources by extraction, analysis, identification and relative content determination of volatile constituents in Typhonium giganteum Engl.. However, the rich medicinal values of its volatile oil constituents, particularly terpenes, remain to be further studied.

Test results show that DJL-V can significantly inhibit T47D cell proliferation in a time- and concentration-dependent manner within a certain concentration range, and can induce apoptosis. Apoptosis rates of T47D cells are 7.51%, 13.45% and 13.79%, respectively, after treatment with 100 g/L DJLV for 24, 48 and 72 h; the degree of T47D apoptosis is positively correlated with the time. There is a significant increase in the distribution of S phase cells after treatment for 72 h. It can thus be seen that DJL-V has proliferation inhibitory and apoptosis inducing effects on T47D cells, and its anti-tumor mechanism is associated with the induction of apoptosis. This is consistent with the apoptosis inducing effect of Typhonium giganteum Engl. on a variety of tumor cell lines and its time- and dose-dependence reported in the literature [16]. There have also been studies suggesting that the dosedependence of apoptosis is limited to a certain range; large doses cause acute necrosis, thus weakening the apoptosis inducing effect; whereas too low doses may only cause tiny, reversible damages[3,17]. Therefore, the research of optimal dose of apoptosis inducing drugs is of important significance in clinical work.

Detection of drug sensitivity by MTT assay allows indirect understanding of subcellular states and mitochondrial changes [18], which is conducive to highly targeted individual therapy, and can improve the curative efficacy and the quality of life. This study also indirectly confirms that DJL-V has T47D mitochondrial respiration inhibitory, oxidative phosphorylation blocking and electron transfer disturbing effects, thereby leading to apoptosis. Induction of tumor cell apoptosis is the main goal and means in the research of cancer treatment[19]. Inverted microscopic observation results show that after T47D cell treatment with 100 g/L DJL-V, the number of viable cells decreased markedly whereas the number of apoptotic cells increased with increasing treatment time as compared with the control group, showing the time dependence of DJL-V's apoptosis inducing effect on T47D cells. Therefore, from the perspective of apoptosis induction, continuous small dose administration on T47D cells can improve the outcome. DJL-V can significantly induce T47D cell apoptosis, suggesting that the apoptosis induction may be one of DJL-V's anti-tumor mechanisms of action. This provides a new therapeutic strategy for future cancer treatment.

After T47D cell treatment with 100 g/L DJL-V, S phase cell distribution markedly increases with increasing time, and G2-M phase cells also somewhat increases. It can thus be seen that DJL-V can change the proliferation cycle dynamics of T47D cell lines when acting on them, which is manifested by increased S phase ratio, slightly increased G2-M phase ratio and decreased G1-S phase ratio, thereby blocking S phase and G2-M phase of tumor cells, weakening tumor cell division capacity, and inhibiting tumor proliferation. DJL-V's cell cycle arrest effect is an important cause of increased apoptotic cells. Enhancement of such an arrest effect can produce cell synchronization effect, enabling tumor cells to be distributed in the S phase, which can play a synergistic anti-tumor role together with the S phase cell cyclespecific drugs, thus providing the theoretical basis for enhancement of chemotherapeutic efficacy by combined application of DJL-V and other drugs in clinical practice. In addition, a previous study has confirmed that cells in mitotic phase are more sensitive to radiotherapy than cells in other phases[20]; so DJL-V combined with radiotherapy promises better therapeutic effect for cancer patients.