Visualization and quantification of SPIO nanoparticles in intracellular spaces of macrophages for nanomedicine applications.

This work focuses on the visualization and quantification of Super-paramagnetic iron oxide nanoparticles (SPIO-NPs) inside macrophages using transmission electron microscope (TEM) images. Macrophages have been extensively used as probes for cell and subcellular structure labeling, as well as for drug and gene delivery. In order to track the macrophages movement inside the body, SPIO-NPs are introduced to help in the visualization of macrophages by MRI imaging and then to control process of the drug and gene delivery. The mechanism of interaction between macrophages and SPIO-NPs is still not fully understood by scientists. Estimating the quantity of NPs inside microphages will certainly improve the understanding of this mechanism. In this work a 3D reconstruction and visualization, using transmission electron microscopy (TEM), of macrophages filled with SPIO-NPs is being developed. An estimation of the quantities of the NPs inside macrophages has been achieved. The visual interaction between macrophages and SPIO-NPs had been discovered.

The rapid advances in nanotechnology and the ever-decreasing size of features in the biological sciences result in the need for advanced characterization with high spatial resolution in two and three dimensions. Electron microscopy, using tomography to reconstruct a three-dimensional nature of an object from a tilt series of two-dimensional projections (images), allows more pertinent quantitative analysis. Electron tomography offers an intermediate resolution (of about 1 nm) with a field of view of hundreds of nanometer, making it ideal for the characterization of many nano-scale objects. It is the most widely applicable method for obtaining three-dimensional information by electron microscopy.

Once administered in the body, nanoparticles will be essentially taken up by the reticulo-endothelial system (RES) consisting mainly of macrophages [1], which are involved in the coordination of immune responses, the elimination of pathogens, and the control of tissue homeostasis.

Certain studies focus on the understanding of the undesirable, unintended or toxic effects of NPs once administrated to the human body. In order to understand side effects that may occur in vivo during transport of NPs to the area of interest, a recent study [2] tried to understand and exploit NPs interaction with the blood vessel and blood. Another study [3] investigated the physico-chemical properties of NPs in order to understand the toxic effect of nanomaterials on the cell biology. Also, the phenomena of agglomeration of NPs in cells may affect the potential of drug delivery, diagnostic imaging or increase the toxic potential. A rapid screening method to evaluate agglomeration of NPs in the blood is proposed in [4]. Epithelial cell sheet showed slower migration after exposure to TiO2 and SiQ2 NPs and significantly impaired wound healing capability [5].

With their fascinating size-dependent magnetic properties and their relative biocompatibility, magnetic Superparamagnetic iron oxide (SPIO) nanoparticles have been extensively used as probes for cell and subcellular structure labeling, as well as for drug and gene delivery. They were commonly applied for different biomedical applications, such as magnetic resonance imaging (MRI) and drug delivery to living cells [6,7].

Non-invasive imaging of macrophage activity using SPIO nanoparticles as contrast agent has raised increasing interest in the diagnosis of diseases involving inflammation, infections and tissue degeneration, making them attractive vehicles to deliver contrast agents for diagnostic or drugs for therapeutic purposes [8]. Inside the body, different environmental conditions will orient macrophages to have different actions or polarization states [9,10]. Classically activated or M1 macrophages have a pro-inflammatory action. In contrast, alternatively activated or M2 macrophages, have an immunomodulating activity and promote wound healing and angiogenesis [11].

Therefore, a better understanding of the mechanisms of interaction between nanoparticles and macrophages would significantly advance our control of dynamic processes in nanomedicine.

In this paper, a 3D reconstruction and visualization of macrophages with SPIO-NPs at a sub-cellular scale is seen. Moreover, a method of quantification of NPs uptake by macrophages is proposed. This will help investigators to better estimate the amount of NPs absorbed by macrophages. This visualization and quantification serves the purpose of screening the agglomeration of NPs, the control of drug and gene delivery process as well as improve the diagnosis and treatment of different diseases by MRI imaging [12,13].

Dextran coated iron oxide nanoparticles functionalized by the addition of Polyethylene Glycol (PEG) were preferred for efficient macrophages labeling [15,16]. It was previously reported that these nanoparticles showed an enhanced labeling efficiency of macrophages with a better biocompatibility [17]. These nanoparticles have a dextran coating of 40,000 g/mol and a PEG length of 300 g/mol for a total diameter of 100 nm with an iron oxide crystallite diameter of 10-13 nm according to the supplier specifications.

M1- and M2-polarized macrophages were incubated with either carboxyl or amine modified PEGylated SPIO nanoparticles (SPIO-PEG-COOH or SPIO-PEG-NH2 respectively) in serum-free RPMI medium to avoid proteins interactions with the uptake mechanism [18] as the colloidal stability of particles in protein-rich media can be influenced by interface characteristics [19]. The incubation step was followed by 4-5 hours in SPIO-free culture medium to allow sufficient time for iron oxide internalization before fixation for TEM tomographic analysis.

M1 and M2 Macrophages were cultured and labeled in Permanox dishes to allow direct processing of cells without the need for scraping. They were fixed with 2.5% glutaraldehyde in 0.05 M sodium cacodylate buffer (pH 7.4), post-fixed with 2% osmium tetroxide, subsequently dehydrated in ascending grades of ethanol and finally embedded in Epon resin. Ultrathin sections (70 nm) were imaged with tilt series (-60° with 2° increment step size) at resolution of 9.7Å/pixel using a Hitachi H7500 transmission electron microscope operating at 80 kV (National Center for Macromolecular Imaging, Baylor College of Medicine, TX, USA) with a time of exposure of 1s and a defocus set to 0 μm. Golden particles of size 15 nm were used as fiducial seeds for alignment purpose.

Figure 1 show three samples of tomographic tilt-series of the macrophage with SPIO1-m0.

Figure 1: Three images from the tilt-series obtained from the TEM Hitachi H7500.

Figure 2a shows the original image (projection). Figure 2b shows the SPIO in blue color that exists on this section only determined from 3D model of the SPIO in macrophages. Figure 2c shows a projection of 3D reconstructed model of the SPIOs in macrophages at a direction (90°) perpendicular to the slice plan. SPIOs nanoparticles are shown in blue color in the images at different locations.

Figure 2: Shows the distribution of SPIO1-m0 inside macrophages.

Figure 3a shows the original image (projection). Figure 3b shows a slice from the 3D volume of the SPIO-Coogh macrophages, SPIOs are in green color. The slice is at the same location as the section of figure 3a.

Figure 3: Shows the interaction and distribution of BM-derived macrophages type M0 with SPIO-Coogh.

Figure 4a shows the original image (projection) located at the center of the 3D volume of the SPIO in the macrophage. Figure 4b shows in green the SPIOs in this section only. Figure 4c shows a slice from the volume of macrophages with same location as the section in figure 4b. SPIOs are shown in blue color on the slice of figure 4c.

Figure 4: shows the interaction and distribution of BM-derived macrophages type M1 with SPIO 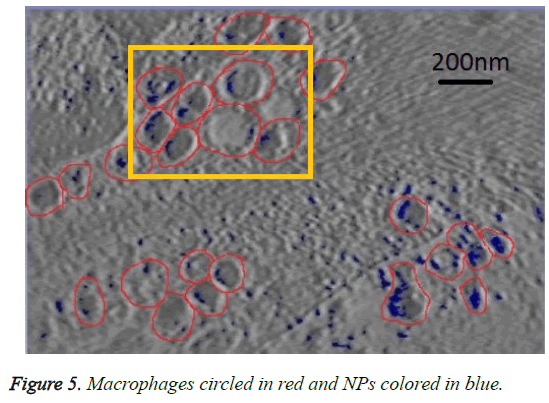 Figure 5: Macrophages circled in red and NPs colored in blue. 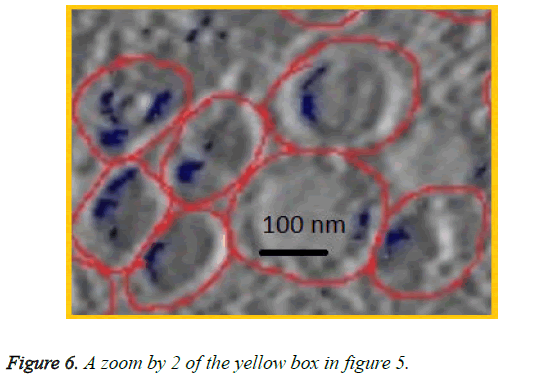 The resolution of the TEM images is about 10 angstrom per pixel (1 nm) and the average diameter of NPs used is about 11 nm. Counting the blue pixels in the encircled macrophage in the slice provides an estimation about the surface covered by NPs inside this macrophage. If the blue surface is divided by the average surface of one NP, this provides an estimation of the total number of NPs inside the encircled macrophage. The surface of one SPIO-NP is estimated by πd2/4, with average diameter of 11 nm.

Visualization of the 3D distribution of NPs will help to locate the macrophages, measure their dimensions and counts them. From the whole set of blue dots we can estimate the average number of NPs absorbed by each macrophage. The NPs helps in seeing the macrophages locations using MRI images. Macrophages are used as vehicle for drug delivery and NPs can helps to detect the macrophage numbers and locations inside the target organ using MRI imaging. This visualization and quantification improves the accuracy of drug delivery by estimating the amount of drug received by the site of interest (inflammation or cancer). It can also help in the diagnosis and therapy procedures of the region of interest in nanomedicine.

Seeing the NPs inside macrophages in 3D and knowing their approximate amount will certainly help in reduction of the undesirable effect of NPs as well as in the control of drug delivery and imaging processes for nanomedicine applications.

This work has shown that macrophage SPIO interaction can be visualized in 3D. It also shows that most of the SPIOs are incorporated into the macrophages. Hence, this study could help in assessing the quantity of SPIOs inside the macrophage in 3D space. This provides researchers a more accurate framework for drug delivery, diagnosis imaging or other nanomedicine applications.

The author extends his appreciation to the College of Applied Medical Sciences Research Centre and the Deanship of Scientific Research at King Saud University for funding this research. I also thank Prof. W. Chiu, Dr. Q. Zhang, and Dr. A. Al-Faraj for sample preparation and TEM imaging.