Use of application of navigation system to odontogenic benign tumors with maxilla.

Oral and maxillofacial region has a complicated anatomy with critical nerves and arteries inside. Therefore, oral surgeons sometimes do not have enough operative fields during surgeries and anatomic changes caused by tumors and fractures make the surgeries more difficult. The application of navigation system in oral surgery has started in such cases that tumors are close to cranial base and have risks to damage important anatomical structures like nerves and vessels. It can make doctors more confident with their operations and decrease operative risks, but the use is still limited because of several obstacles. In this context, we applied navigation system to the operations of removing recurrent ameloblastoma on sphenoid bone and myxoma. The surgeries we performed with navigation system were successful and we have not had any postoperative complications at all. This report presents to use navigation system to remove benign tumor that occurs in deep area of craniofacial bone completely in a minimally invasive way.

For surgeons, it is always a critical issue whether it is possible to resect tumors from patient’s body safely or not. The more deeply tumors invade inside, the more difficult surgeries become due to its complicated anatomy. To solve this problem, navigation system has been introduced in the field of neurosurgery, head and neck surgery, orthopedic surgery and hepato-biliary-pancreatic surgery, and its effectiveness has been recognized widely in these field. Therefore, navigation system and robot-assisted surgery like DaVinci have been developed rapidly [1-3] and become mainstream to minimize surgical stress. In the field of hepato-biliary-pancreatic surgery, navigation system using projection mapping and fluorescently labeled antibody is developed and used [4]. In oral surgery, on the other hand, navigation system has been applied to reconstruction of fractured bones [5,6], osteotomy [7-10], dental implants, removal of foreign bodies [11] and tumor resection [12- 16]. Recently, we applied a navigation system to the resection of relapsed ameloblastomas and myxoma that were close to skull base and orbit. Here we report those cases to confirm the effectiveness of navigation system in oral surgery along with related literature surveys.

The first case was for a 37-year-old male patient who experienced reoccurrences of ameloblastomas twice, in 2002 and 2010. In 2002, he felt swelling with his left cheek, and had medical examination at a dental hospital. The cause of the swelling was diagnosed as a cyst, and the excision of the cyst was conducted. In 2010, he felt swelling again and the reoccurrence of ameloblastoma was pointed out at the same hospital. He was proposed to have an operation with Weber incision. However, since he did not want skin incision in his face, he came to our hospital to ask for the first medical examination. In the same year, an intraoral operation was done; after the surgery, his oral cavity was opened to left sinus and he was requested to use a maxillary prosthetic. In 2016, unfortunately the third reoccurrence was identified. The reoccurrence was recognized at the proximal lateral plate of pterygoid process. Since a tendency of its increase in size was identified, we decided to move on to resection by surgery. The area of the surgery was really narrow and close to the cranial base, as shown in Figure 1A, we also decided to use a navigation system. 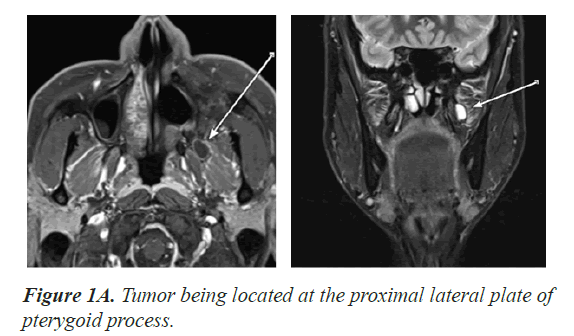 Figure 1A: Tumor being located at the proximal lateral plate of pterygoid process.

We used the magnetic field navigation system (Stealth Station S7, Medtronic). First, we put the emitter next to the patient’s head and patient tracker on the forehead of the patient. Then, we traced the forehead and dorsum of nose to register the positional information with images so that we could simulate the surgery using the images in advance. After this operation, we started the surgery. We cut just above the tumor and exfoliated the mucoperiosteal flap. We removed tumor carefully checking the location and anatomical structures around tumor by navigation system, as shown in Figure 1B. After we removed the tumor, we removed the surface of bones by cutting with round bur. We also checked if there was no remaining of the tumor by comparing the actual anatomical structures with CT images that we draw our plan on for excision. Though there was a risk of postoperative bleeding by damaging pterygoid venous plexus, the patient showed steady progress without any surgical complications. We now check his condition regularly, but have not identified any symptoms of the reoccurrence of ameloblastoma. 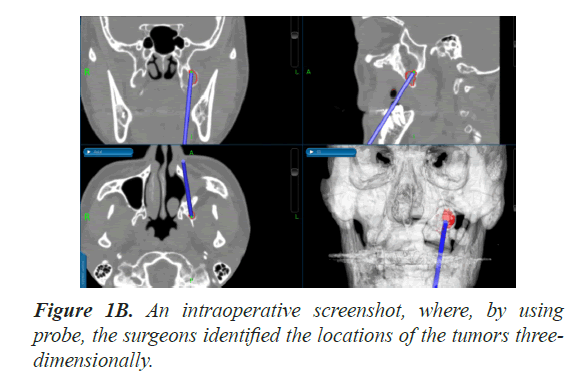 Figure 1B: An intraoperative screenshot, where, by using probe, the surgeons identified the locations of the tumors three-dimensionally.

The second case was for a 35-year-old male patient suffering from odontogenic myxoma. He had an experience of the treatment and osteotomy to cure jaw deformity. In 2014, the existence of cystic lesion was found in his right maxillary sinus by panoramic radiographs of his dental treatment. Three years later, he noticed nasal congestion with his right side. He had a fine-needle aspiration biopsy with the right maxillary sinus and a computed tomographic sonography. Then, odontogenic myxoma was suspected and he came to see us finally. We also took MRI and contrast-enhanced CT and decided to use navigation system as the tumor occupied his right maxillary sinus and it eroded the maxillary bone in front of the sinus. What is worse is that it reached ethmoid horizontally and orbital floor vertically, as shown in Figure 2A. 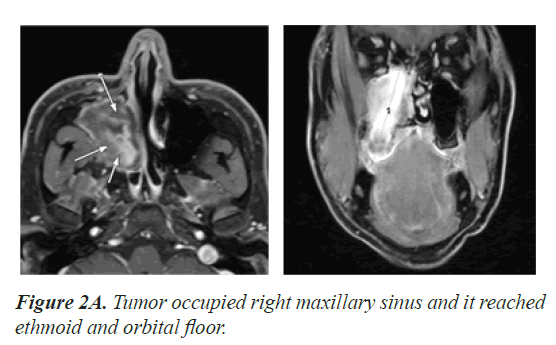 In the operation, we set up the navigation system similarly to the first case and registered the patient’s positional information with images. We cut into with Matis incision and extracted the right first premolar. Then, we removed the thinned alveolar bone of the right first and second molars and the former and side bones of maxillary sinus to have an enough field of operation. We peeled off the tumor from the maxillary sinus and removed it by using navigation system in order not to hurt the surrounding tissues, as shown in Figure 2B. After removing the tumor, we also used endoscope with some otolaryngologists to check if tumor was not left and if there was no abnormal bleeding. The patient showed steady progress without any surgical complications after the surgery. We have not identified any symptoms of the reoccurrence of myxoma so far. 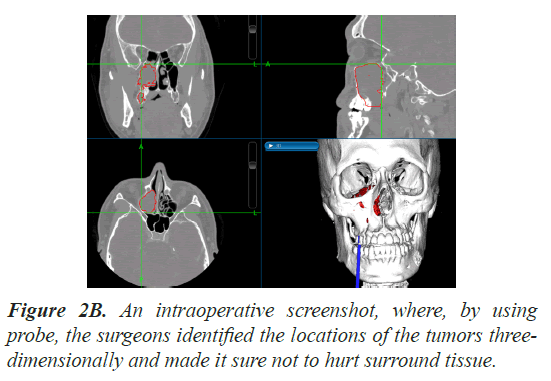 Figure 2B: An intraoperative screenshot, where, by using probe, the surgeons identified the locations of the tumors three-dimensionally and made it sure not to hurt surround tissue.

For example, ameloblastoma is a benign but aggressive tumor found in mandible (80%) and maxilla (20%) [17]. Especially, ameloblastoma in maxilla is often difficult to be detected in early stages and can invade into soft tissue and the vicinity. In the worst case, ameloblastoma can turn into carcinoma with lung metastases after suffering several relapses [18,19]. The treatment of ameloblastoma is usually performed by either radical resection or conservative resection [18,20]. Several studies have reported that its recurrence rate depends on the way of surgeries [18,21,22]. A wide range of the recurrence rate has been reported [23], but generally in those studies, conservative treatment showed a higher recurrence rate than radical treatment. In other studies, the recurrence rate of maxillary ameloblastoma was thought to depend on the site character (anterior/posterior of upper jaw), root resorption and presence of maxillary sinus invasion irrespective of the surgical methods [24]. In terms of resection margins, by taking into consideration the character of tumor, it is recommended to resect tumor with sufficient margin. Carlson et al. recommended 1 to 1.5 cm resection margins with radical resection [25]. According to De Silva et al., tumor cells are often found to extend by 2 to 8 mm beyond the clinical margin given by microscopic examination [26]. However, it is sometimes difficult to have enough margins depending on tumors’ anatomical position. This discussion is shared with our second case of myxoma. Myxoma is also a benign tumor that is classified as an odontogenic and maxillofacial bone tumor but locally aggressive and invasive tumor [27]. Therefore, some study recommended surgical resection with a minimum bone margin of 1 cm [28]. However, such operations may be difficult if conducted only by oral surgeons, and if the tumors are odontogenic, it would be all the more complicated. Since surgical procedures always accompany the risks of recurrence and the loss of function and aesthetics, more minimally invasive and effective options are always wanted.

There are several reasons why navigation system can help surgeons perform better surgery. First, by simulating and setting the area of tumor before surgery, surgeons can check whether the tumor can be completely resected or not. Also, simulation using navigation system allows surgeons to think about the most minimally invasive way in the surgery of interest [29]. Second, it can visualize the area of the tumor of interest and the relationship between the location of the tumor and adjacent anatomical structures three-dimensionally with help of CT and MRI images in real-time during the surgery. It is reported that the accuracy is less than 1-2 mm [11]. This reliability helps the surgeons resect not only benign tumors but also malignant ones without hurting untargeted anatomical structures. Moreover, if the surgeons put a mark and draw a line on CT or MRI data before the surgery, it is possible to show them during surgeries [16,30]. Also, Ivashchenko suggests that the combination with Cone-beam CT helps surgeons to make an adequate intraoperative assessment of planned surgical margins of maxillary tumors [31].

On the other hand, there are some disadvantages for the use of the system. First, navigation system requests the registration of exact location in advance, and if doctors fail this operation, the location pointed by the system could be wrong and the use of navigation system is meaningless. Some studies suggest that dorsal and dorsal cranial tumors that extend behind Ohngren’s line have a higher risk of incomplete resection due to difficulties of proper evaluation of preoperative imaging [32]. Also, when we have to perform surgery in emergency, the setting of the system is time-consuming. Second, the system is still expensive, which may make medical disparity between hospitals and between doctors. Third, at the moment, the application of the system is limited to neurosurgery, head and neck surgery and orthopedic surgery. Therefore, if odontogenic tumors invade around orbit or cranial base, oral surgeons have to collaborate with other departments. Moreover, when mandible is the target of the operation, oral surgeons have to deal with the operation using mirrorimage of unaffected side of mandible [14], mounting a dynamic reference frame directly on the mandible or using occlusion splint to fix the mandible with a defined position against maxilla. These strategies using direct tracking system via sensor or splint are sensitive to the relative movement of the mandible and are likely to lose accuracy during the surgery [11].

To solve these problems, new techniques and systems have been developed. Wang et al presented an augmented reality navigation system with automatic maker-free image registration using 3-D image overlay [2] . The technique for accurate registration has also been examined by others [14,33-35]. In near future, these technologies could make surgeries using navigation system easier and more reliable

The author would like to thank Dr. K.Kondo, Dr. H.Nishijima, the Department of Otolaryngology, Head and Neck Surgery, University of Tokyo Hospital, for his technical contribution to this study.

The authors declare that they have no known competing financial interests or personal relationships that could have appeared to influence the work reported in this paper.