Binge Eating Disorder (BED) is one of the most frequent eating disorders in industrialized societies. Reduced serotonin activity has been suggested to trigger some of the cognitive and mood disturbances associated with BN. Therefore, pharmacological treatment of BED is mainly based on the use of selective serotonin reuptake inhibitors, that have proved effective. The biological basis of this disorder has not been completely established yet. The aim of this randomized, controlled trial was to verify the efficacy of sertraline, a selective serotonin reuptake inhibitor, in a group of patients with BED. Twenty female outpatients, with an age range of 24-36 years having BED-binge purging, as defined by the DSM IV, were assigned randomly into two treatment groups; the first group received sertraline 100 mg/day for 12 weeks, the second group received placebo. The study was conducted for 12 weeks with weekly clinical assessments. At the end of the treatment period, the treated patients with sertraline showed a significant reduction in the number of binge eating crisis and purging with respect to the group who received only placebo . Treatment was never interrupted for any emergency reasons. This study confirms that sertraline is well tolerated and effective in reducing binge-eating crisis and purging in patients with bulimia nervosa.

The term binge eating disorder (BED) refers to an eating behav-iour characterised by episodes of convulsive greedy uncontrolled ingestion of high caloric and easy-taking food in great quantities [1-4]. Compensatory behaviours to control the weight often follow these episodic crises, such as self-induced vomit-ing, laxatives or diuretics misuse. Even if the bulimic patient has nearly normal weight or slightly excess weight, the body weight stability is very fragile because the idea of putting on weight on becomes dominant [1-4].

In 1994 the DSM-IV defined the peculiarities of the bulimic crisis (binge-eating) on the quantities of food taken and the patient’s lack of control of the eating impulse [2]. Moreover, the DSM-IV identifies two subtypes; with eat ing behaviours (self-induced vomiting, misuse of laxatives or diuretics, etc.) and without purging behaviours, when the patient uses fasting or excessive physical exercise and no medicine or vomiting [2]. The first type is obviously the most serious one.

The clinical complications of BED are mainly linked to the chaos in eating, but especially to the compensatory episodes which can provoke side effects, such as the erosion of dental eamel or the inflammation of the esophageal mucosa, up to hydro-electrolytic imbalances which can cause arrhythmia, cardiac de-compensation and renal insufficiency [5]. The bulimic patients often show mood disorders (depression), abnormal behaviours such as alcohol or drugs misuse, self-damaging behaviours, panic crises, obsessive-compulsive symptoms, etc [1-5].

Recent theories refer to BED as a serotoninergic system disfunction [6]. Neurochemistry, endocrinology and comorbidity studies have brought to speak of a reduction of the serotoninergic transmission in the etiopathogenesis of BED [6].

The BED behaviour can be considered as a mechanism aiming at compensating a disorder of the central serotoninergic system; serotonin (5HT) is indeed closely implied in originating the signal of repletion [6].

The bulimic crisis in theory is compatible with the hypothesis of a reduction of the serotoninergic tone, since the bulimic patients show a reduced sensation of repletion and a stronger sensation of being hungry [6]. In the active phases of bulimia nervosa the concentration of cerebrospinal fluid, plasma, urine and the global turnover of 5HT and 5-idrossindolacetic acid (5-HIA) are reduced or normal, while in the disease subsidence phase there are high serotonin levels [7-11]. However, the sensitivity of the serotoninergic receptors monitored at a post-synaptic level has shown to be reduced [7-11].

Moreover, psychoendocrinological tests studying the functionality of the 5HT at the pre- and post-synaptic receptors have pro-duced reduced responses or no response at all, which suggest both that the reduced secretion of serotonin and a reduced response of the post-synaptic serotoninergic receptors to the serotoninergic stimulus are possible [7-11].Therefore, the specific alterations in the serotoninergic transmission cannot be considered as secondary to nutritional qualitative-quantitative deficits, but can represent a possible biochemical substratum with possible therapeutic implications in generating the bulimia nervosa [12-14]. The serotoninergic theory would also explain other psycho-pathologic aspects that are often linked to the eating behaviour disorders. Based on this hypothesis the use of antidepression psychotropic drugs and the serotonin reuptake selective inhibitors (SSRI) as the symptomatologic therapy of BED, have become popular. Our study aims at testing the efficacy of the most selective SSRI (ser-traline) in the symptomatologic treatment of BED [15-21].

The study included 20 female patients, aged between 24 and 36, who suffered from BED with purging behaviours (BED-binge purging). The patients with their consent, were randomly divided into two groups of 10 in each. The patients in the first group were given sertraline of 100 mg/day. The patients in the second group had placebo. The treatment was continued for twelve weeks. Patients were monitored twice a week for twelve weeks to observe the clinical development and the possible side effects if any. The patients maintained the diary recording their food choices, bulimic seizures, weight and the possible compensatory behaviours.

At the end of the of the treatment period, the group given sertraline showed 75% decrease in the bulimic seizures and 55% reduction in the purging behaviour (Fig.1). The patients also lost about 9% of their weight (Fig. 2). The second group which had placebo conversely showed 10% reduction in of the bulimic seizures and 8% decrease in purging behaviours (Fig. 3). However, their body weight did not show any significant changes (4%). During the treatment, the patients showed certain side effects. The group given sertraline had 55% sleepiness, 30% mouth dryness and 8% light asthenia. The group given placebo had 20% headache, 12% asthenia and 6% insomnia.

Figure 1: The effect of sertraline versus placebo on the number of purging behaviors.

Figure 2: The effect of sertraline versus placebo on the reduction of Body Weight 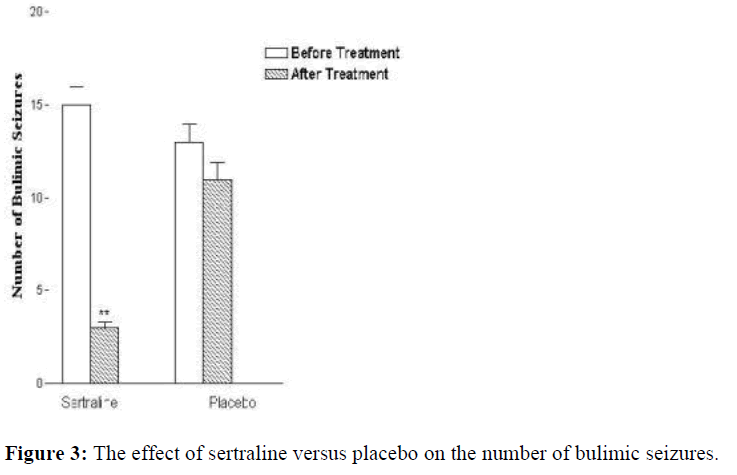 Figure 3: The effect of sertraline versus placebo on the number of bulimic seizures.

None of the patient went out of the trial because of any side effects.

Our results allow us to emphasize that the use of sertraline in symptomatological treatment of BED has an impressive clinical value. The bulimic patients who have been treated with ser-traline, indeed, showed a statistically significant decrease both in bingeeating crisis and purging episodes. The reduced crav-ing for carbohydrates with a modest average caloric intake, however caused a slight loss of body weight. Moreover, sertraline has been shown to be well tolerated. These encouraging results therefore suggest that sertraline could be used as an alternative to tricyclic or other SSRI in the treatment of BED.