Metabolism of thyroid hormones and iron is quite inter-dependent. Deficiency of iron can produce hypothyroidism and vice versa. This fact is important, especially during administration of treatment of hypothyroidism. Therefore, in this study, 50 newly diagnosed hypothyroid patients were investigated for levels of iron; ferritin and total iron binding capacity (TIBC) and compared with 50 age and sex matched healthy controls. The levels of iron and ferritin were found to be significantly decreased while the levels of TIBC were observed to be significantly increased in patients as compared to controls. Thyroid hormone insufficiency may lead to deficiency of iron and vice versa. Other factors like oxidative stress may also play a role. Thus, estimation of iron and related parameters may be quite useful during the diagnosis and treatment of hypothyroid patients.

Iron metabolism is very intricately connected to thyroid hormone metabolism. Estimation of serum ferritin (storage form), iron and total iron binding capacity (TIBC), which measures percent saturation of transport form transferrin with iron, may be of great significance in hypothyroidism. Normal thyroid status is dependent on the presence of many trace elements e.g., iron, iodine, selenium, and zinc for both the synthesis and metabolism of thyroid hormones [1]. Iron is a component of many enzymes including thyroid peroxidase (TPO) which takes part in the initial two steps in thyroid hormone biosynthesis [2]. Low ferritin levels have also been observed in hypothyroid patients [3]. Several studies in animals and humans have shown that nutritional iron deficiency may significantly lower the circulating levels of both thyroxine and triiodothyronine and may also reduce conversion of T4 to T3 [4,5]. Iron deficiency has also been reported to decrease plasma concentrations of T3 and T4 and increase in vitro hepatic rT3 deiodination, suggesting the thyroid hormone metabolism via a deactivating pathway in iron deficiency. It is possible that a small fraction of T4 gets converted to T3 and a larger proportion is metabolized to a physiologically inactive metabolite, rT3. It is not yet clear how iron deficiency exerts its effects on deiodinase activity [6].

Hypothyroidism, itself, may lead to low iron levels due to poor gut absorption as a result of decreased levels of digestive acids/ enzymes or due to associated autoimmune conditions like celiac disease [7]. It may also be as a result of heavy mensuration seen in some female patients [8]. Thus, hypothyroidism and iron deficiency states are strongly interrelated. Estimation of iron profile may be of help in patients diagnosed with hypothyroidism as the underlying cause may be the associated iron deficiency. Sympathetic system symptoms like anxiety, palpitations, irregular heartbeats etc. may worsen on treatment with thyroxine if patient is iron deficient [9]. Not many reports are available in literature to report on iron profile in hypothyroid patients. Being a third world country, iron deficiency is very common in general population and prevalence of hypothyroidism has also increased tremendously over the past few years in this area. Therefore, this study was planned to estimate levels of iron, ferritin and TIBC in newly diagnosed patients of hypothyroidism.

This study was conducted on fifty newly diagnosed patients (age group 20-40 years) of hypothyroidism and fifty apparently healthy age and sex matched euthyroid controls. The diagnosis was based on detailed history and thyroid profile analysis. All the patients and controls were subjected to routine biochemical investigations. Pregnant or lactating females and those with any associated chronic medical condition or on drugs/ supplements which may affect iron metabolism were excluded from the study. Six mL of venous sample was collected in plain vacutainer aseptically after obtaining informed consent and taking care of ethical issues. Serum was separated and stored at -20°C for estimation of iron, ferritin and TIBC in batches. Total T3 (TT3) and T4 (TT4) were analysed using standard radioimmunoassay, thyroid stimulating hormone (TSH) using immunoradiometric assay, free T3 (FT3), free T4 (FT4) and ferritin by chemiluminiscence immunoassay (Advia Centaur CP, Siemens, Switzerland, USA) [10] while iron and TIBC were estimated by autoanalyser (Konelab 30i) using kits by Giesse Diagnostics, Italy [11]. The results were compared in two groups by applying appropriate statistical analyses and coefficient of correlation was calculated by applying Pearson’s formula. 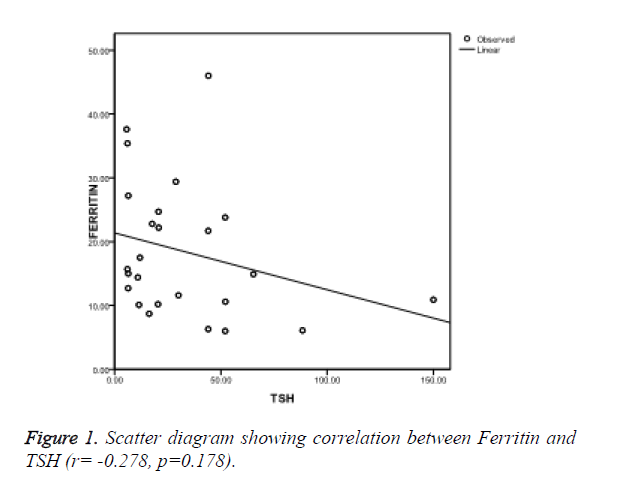 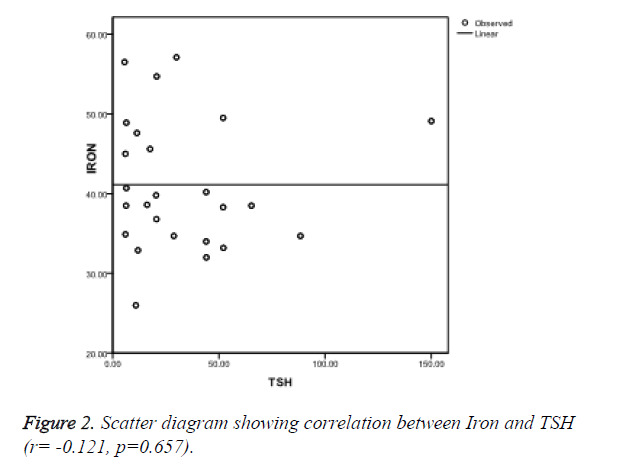 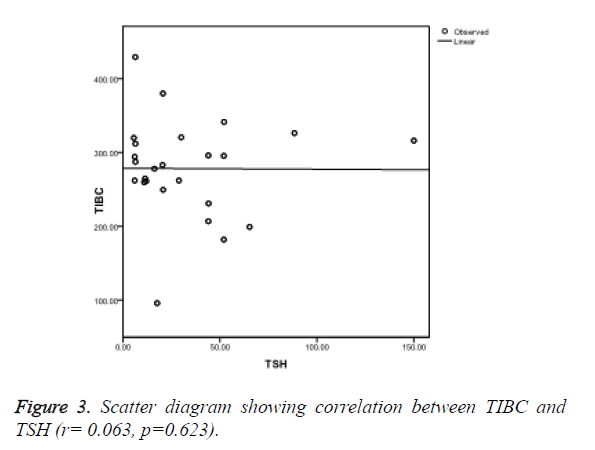 In this study, the levels of ferritin, iron were found to decrease while that of TIBC to increase in patients suffering from hypothyroidism as compared to healthy controls. These results are in accordance with other studies which reported that iron deficiency may be associated with low levels of thyroid hormones [5,6,8]. Though not many studies are available in literature to comment on status of iron profile in patients of hypothyroidism. Sixty percent of total hypothyroid patients were females. Hypothyroidism is more prevalent in female population as estrogen has an anti-thyroid action. Thus, in reproductive age group, female propensity is seen in hypothyroid patients. Redox cycling of catecholestrogen metabolites between quinone and catechol forms is a mechanism of generating potentially active oxygen radicals [12]. Metal ions, specifically iron, are necessary for the production of extremely reactive hydroxy radicals shifting the balance of body towards increased oxidative stress [13]. Increased oxidative stress has been reported in hypothyroidism and iron is a prominent player in this mechanism [14-16]. Metal ions, especially iron, are required for generation of reactive oxygen species. Ferritin is an iron storage protein found in all living organisms involved in iron sequestration with some antioxidant properties. High TSH, as observed in clinical hypothyroidism, is known to induce inflammatory cytokines and to decrease the concentration of antioxidants in the body [17]. This may be an additional reason for decrease in ferritin levels, which exhibits antioxidant properties, in these patients. The expression of gene for ferritin has also been reported to be induced by T3 hormone [18].

Thyroperoxidase, the key enzyme in thyroid hormone biosynthesis, is iron-dependent. Thus, iron deficiency may be the underlying cause in the development of hypothyroidism. This fact is of great significance while treating these patients. The symptoms of sympathetic overstimulation due to iron deficiency may worsen on administration of thyroxine. Thyroxine administration has been reported to increase erythropoietin levels and improve erythropoiesis. This leads to increased requirement of iron and may culminate in manifestations of iron deficiency [19]. Already existing iron deficiency in these subjects may make the clinical picture poorer. Lack of stimulation of erythroid colony development by thyroid hormones in hypothyroidism, reduction in oxygen distribution to tissues and diminution of erythropoietin level in deficiency of thyroid hormones leads to anemia and the constituent effect on iron metabolism [20]. Thus, the condition becomes a vicious cycle as iron deficiency may both be a cause and an effect of hypothyroidism. Iron forms an important part of the mechanism that transports thyroid hormone into the cells and lack of it can lead to pooling of thyroid hormone leading to metabolically hypothyroid picture even in presence of normal FT3 levels, producing a thyroxine resistance like situation [21]. The correlation of TSH was found to be positive with TIBC while negative with iron and ferritin showing an obvious association between thyroid hormones and iron metabolism but it cannot be commented upon conclusively as our results were statistically not significant though a significant positive correlation of TSH with ferritin has been reported by some authors [22]. This discrepancy may be due to small sample size in our study. The shortcomings of our study include small sample size and lack of follow-up of these patients with treatment. We tried to exclude the subjects on any kind of antioxidant supplements but many patients are in habit of taking different herbs as a routine in our country which, may be missed even by a careful history. Thus, it can be concluded that estimation of iron profile may be of significance in patients with hypothyroidism as it may affect the treatment protocol and also aid in monitoring the disease.