The neuro-protective effects of water extract of Faces Trogopterori on transient MCAO rats.

Objective: To get the water extracts of Faeces Trogopterori (WEFTs), and study its effect on Neurological function, inflammatory reaction and oxidative damage caused by ischemia-reperfusion injury of transient MCAO SD rats.\

Method: Neurological evaluation was conducted by modified Longa score, infarction volume percentage was calculated by TTC staining method and a normal method which has exclude the error of edema; SOD activity was tested by xanthine oxidase method, MDA content was determinate by TBA (Thiobarbituric acid) method, IL1-β level in brain tissue and serum in the ischemia-reperfusion rats was got by Elisa.

Result: There was no statistical difference between the score Faeces Trogopterori Groups and control group, but significant statistical difference there was between the two groups, infarction volume ratio of extracts groups was 35%, while the control group at 50%; Faeces Trogopterori group could significantly reduce the MDA content (p<0.01, vs model group), increased SOD activity (p<0.01, vs. model group).

Faeces Trogopterori is a kind of traditional Chinese medicine, it has many active compounds like nitrogen, triterpene, phenolic acids, microelement, volatile components. Its pharmacological activities are included cytotoxic effect, antiinflammatory, anti-ulcer, the effect on the blood system and other pharmacological activities. For triterpene composition of Faeces Trogopterori., 7 kinds of terpene has cytotoxic effect, especially for the effect on the P-388 which is a kind of granulocyte leukemia [1] found that water decoction of Faeces Trogopterori can obviously improve the function of T cells lymphocyte leansformstoin; higher Ts caused by ALS (immune lymphocytes in mice serum) return to normal, improve immune function of mice injected with ALS [2]. Wang et al. make the study of ethyl acetate extract from Faeces Trogopterori, found that this extracts could significantly reduce the content of prostaglandin E (PGE) among the inflammation tissue, but had no significant effect on serum corticosterone level, shows that its anti-inflammatory effects may be associated with inhibition of the synthesis and release of PGE [2,3].

We know that many traditional Chinese medicines (TCMs) could activate blood circulation and improve hemorheology, anti-platelet aggregation and so on anticoagulant effect. Faeces Trogopterori is the one we mentioned medicine above, has fibrinolytic function, can produce the fibrinolysis against urokinase [4]. WEFTs can obviously inhibit the rabbit platelet aggregation induced by ADP, collagen, its inhibitory effect is related with the dose, and intraperitoneal injection into the SD rats could also get the similar results as the above. Intravenous injection in rat had obvious inhibitory effect on perimental thrombosis in carotid artery-venous bypass [5]. WEFTs can significantly prolong the survival of incomplete cerebral ischemia mice, and can reduce ischemic tissue MDA content, improve the activity of superoxide dismutase (SOD), shows that Faeces Trogopterori has certain protective effect in the MCAO model of mice [6,7]. Chen et al. reported that ethyl acetate extract of Faeces Trogopterori has similar contents as the Luoxintong L2 (rutin), thus may have similar effects as the latter [8]. Therefore, according to all these foundation, Faeces Trogopterori has great potential on the treatment of ischemic diseases of the brain. Up to now, no one has studied the effect of WEFTs on the influence of neurofunction in the ischemic brain damage SD rats.

The protocol we used modified Zea Longa method, and specific operation was as followed: weight the rat, induction anesthesia with 5% isoflurane, 1.5% ~ 2% isoflurane anaesthesia. Take the neck midline incision, CCA and ICA were clipped temporarily, insert the suture line from the snip in ECA, slowly pushed into the ICA in cranial artery branch, loosen the ICA artery clamp, ligation suture. The depth from the top and ECA bifurcation about 20 mm, the suture was ligated at the CCA bifurcate, skin sutured. Ischemia after 2 h, pull out the suture, after ECA was electric coagulated, suture the incision.

Neurological evaluation was performed when the animals were allowed 24 hours later from the MCAO model was finished. Scored on a 6-point scale as described previously (0=no neurological deficit, 1=failure to extend right for paw fully, 2=circling to the right, 3=falling to the right, 4=no spontaneous walking with depressed level of consciousness and 5=death). In the suture model, animals were excluded for the following criteria: score lower than 1 point, subarachnoid hemorrhage, and death.

To analyze the infarct volume, the rats were euthanized with pentobarbital sodium at the end of the drug infusion, and their intact brains were quickly removed and sectioned into 2 mm thick slices starting at the frontal pole. The slices were then immersed in the vital dye (2%) 2,3,5- triphenyltetrazoliumchloride (TTC; Sigma Aldrich Corp., USA) in a painting box for 5 min, and the slices were turned over again to obtain consistent dyeing of the anterior and posterior faces, then put it into a 4% formaldehyde solution, fixation at 4. We got the colour pictures by scanning these slices and in this process put a ruler on the scanner, in order to calculate infarct size.

SOD vitality was tested by xanthine oxidase method. Following kit instructions, absorbance was measured at 550 nm with spectrophotometer, myocardial tissue SOD activity was calculated according to the following formula:

Lipid peroxide degradation products MDA content was detected by glucosinolates barbituric acid (TAB) condensation method determination. According to the kit instructions, absorbance was determined at 532 nm. Brain tissue MDA content in the according to the following formula:

IL-1β determination in brain and serum [15]

IL-1β content was tested by ELISA. Antibody of detection phase was polyclonal antibody biotin labeled. Samples and biotin labeled antibody were added into plate hole in sequence, PBS washed. Peroxidase labeled avidin was added, PBS was washed thoroughly, the substrate color was observed by TMB color, then changed into blue, eventually translate into yellow. According to the kit instructions, draw standard curve and calculate the sample concentration, added diluted standard sample and sample liquids into the corresponding enzyme label plate hole, incubated at 37 for 90 min, then washed the plate added into each hole with 1:200 second antibody 0.1 mL, incubated for 60 min at 37; then washed and 0.1 ml 1:600 enzyme-linked was added, 37 for 30 min; After washed and 0.1 mL substrate was added, in dark for 15 min, then 0.05 mL termination liquid was added, absorbance at 450 mm was measured, the calculation of IL-1β in brain tissue and serum (pg/ml).

Twenty-four hours after the onset of MCAO, neurological deficit scores in MCAO rats were significantly higher (p<0.01) than control ones (Table 1), indicating that the MCAO model had effectively established cerebral ischemia. As compared to the model control group, after the treatments with 20 mg/kg and 60 mg/kg WEFTs, the neurological deficit scores significantly decreased.

Table 1. The Effects of WEFTs on neurological scores of rats after reperfusion for 24 h (n=10). 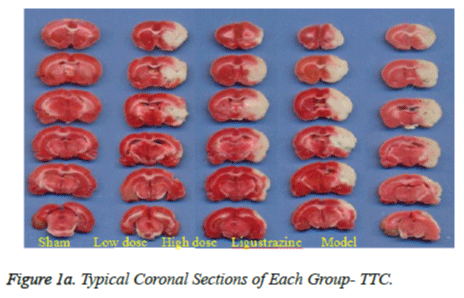 Figure 1a. Typical Coronal Sections of Each Group- TTC. 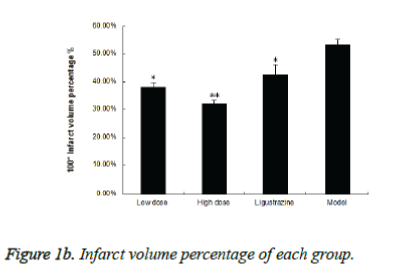 Figure 1b. Infarct volume percentage of each group.

The effects on the SOD and MDA in brain tissue

With the acute cerebral ischemia-reperfusion injury, the SOD activity in the model group was greatly decreased when compared with the Sham group (p<0.01), and the MDA content was increased significantly (p<0.01). When WEFTst group was compared with model, all the three groups exhibited increased SOD activity obviously (p<0.01 or p<0.05), extract group were better; While the MDA content decreased significantly in all the three groups (p<0.01), and no significant difference between the two WEFTs (p>0.05), (Table 2).

To set up an ideal animal model of cerebral ischemia is one of the important tools to study the pathophysiological changes of cerebral ischemia and to evaluate means of effective intervention measures. Because the cerebral vascular anatomy and the function of the rat are similar as human, therefore it is generally believed that the rat is the most suitable animal. We chose the male SD rats as the cerebral ischemia model animal, and conduct the MCAO model. At present, the preparations of the focal cerebral ischemia model are various. However, each of them has their own advantage and disadvantage [16]. For Monofilament nylon suture made MCAO model, the process of preparation is simple, do not need to expose MCA craniotomy, light damage to animals, small impact on the whole body, the success rate is relatively high, not cause big changes of blood pressure, blood gas and the temperature changes after occlusion of MCA. Cause not craniotomy and small trauma, not affect the pathological changes of brain edema and intracranial pressure after ischemic, it is better than that of ligation MCA method with craniotomy; At the same time avoid the embolus randomness brought by internal carotid artery injection occluded MCA, it is especially suitable for focal cerebral ischemia-reperfusion injury of research; Monofilament nylon suture method could block artery of cerebral hemorrhage and the branch vessel of cortical from the MCA that could make relatively occlusion effect [17].

Prone position of ischemic stroke is in the brain arteries, the arteries occlusion lead to the formation of focal cerebral ischemia, its residual cerebral blood flow was rare due to central ischemia, generally the development of irreversible brain damage and hasten death no more than 1 hour. But there are still a small amount of blood in the surrounding brain tissue ischemia central area, could form reversible ischemic injury, still make a balance of ion and cellular structure integrity, this kind of tissue could be known as the ischemic penumbra [18]. If blood flow is restored and drug intervention is given as soon as possible, that would greatly restore the function of ischemic brain tissue, relieve cerebral edema, improve neurologic deficits, and decrease infarct volume.

Our results show that compared with sham group, model group showed significant neuron-function defect, has obvious infarcts, these indicators show that model is successful. The above features and morphological index were all improved by the WEFTs groups, and its effect was similar to the positive medicine ligustrazine, thus the Faeces. Trogopterori. We mentioned above could protect neurons, delay the death of nerve cells, and maintain the structure and permeability of blood brain barrier, reduce ischemia - reperfusion injury.