The monitoring and clinical significance of SAR1B, apoB and MTTP in patients with intracranial atherosclerotic stenosis

Objective: SAR1B, apoB and MTTP were involved in lipid metabolism, which is important for the development of ICAS. This study aimed to investigate the expression of SAR1B, apoB and MTTP in patients with intracranial atherosclerotic stenosis (ICAS) and the clinical significance.

Methods: Eighty patients with acute ischemic stroke were selected in our hospital from Jan 2016-Jun 2016. According to the results of imaging examinations and other clinical data, patients were divided into ICAS group (n=32), Extracranial Atherosclerotic Stenosis (ECAS) group (n=20) and No Atherosclerotic Stenosis (NCAS) group (n=28). LDL-C and HDL-C levels were detected by selective inhibition method and immunization inhibits method respectively, level of ApoB was determined by immunofluorescence, levels of SAR1B and MTTP were detected by Enzyme-Linked Immunosorbent Assay (ELISA).

Atherosclerosis, which is also known as arteriosclerotic vascular disease, is a specific type of arteriosclerosis. Atherosclerosis is characterized by the thickened artery wall caused by the white blood cells invasion and accumulation, in addition, atheromatous (fibrofatty) plaque created by the proliferation of intimal-smooth-muscle cells is also a main cause of atherosclerosis [1]. It has been shown that, among atherosclerosis, Intracranial Atherosclerotic Stenosis (ICAS) is more prevalent in Asians, while Extracranial Atherosclerotic Stenosis (ECAS) is more common in Caucasians [2]. ICAS, as one of the most common causes of the onset, development, and recurrence of ischemic stroke, is proved to be positively correlated the risk for recurrent stroke and progressive dementia [3,4]. It has been reported that ICAS is responsible for about 10% of strokes in North America and 30%-50% of strokes in Asia [5]. Up to now, the mechanism of ICAS induced stroke is still not well understood due to the difficulties in collecting ICAS specimens from living patients [5]. Therefore, the early diagnosis and treatment of ICAS is the key in preventing stroke caused by ICAS. A variety of biomarkers, including PAI-1 and hsCRP, have been widely used in detecting ICAS [6]. However, the clinical applications of those biomarkers are still challenged by the varied individual response. Therefore, it would be of great clinical value to identify new biomarkers to improve the early diagnosis and treatment of ICAS.

In addition, high-density lipoprotein [HDL], which is a protective factor against coronary heart disease, was also found to be correlated with the progression of ICAS [9], and the level of HDL is usually reduced in patients with ICAS [10]. Apolipoprotein B (apoB), as a major component of Low Density Lipoprotein (LDL), can regulate LDL level by affecting lipid metabolism [11]. It has shown that increased apoB level is closely related to the occurrence of ICAS [12].

Microsomal Triglyceride Transfer Protein (MTTP) is essential for the assembling and secretion of LDL and reduced MTTP level can usually lead to reduced level of LDL [13,14]. SAR1 gene homolog B (SAR1B), which is responsible for protein translocation from endoplasmic reticulum to Golgi apparatus, play pivotal roles in the formation and secretion of chylomicrons, and metabolic residue chylomicrons is closely related to the occurrence and development of atherosclerosis [15]. In view of the functionality of apoB, MTTP and SAR1B, it will be reasonable to hypothesize that they may have important functions in the progression of ICAS.

In this study, expression patterns of SAR1B, apoB and MTTP in patients with ICAS were investigated and the correlations with low-density lipoprotein cholesterol LDL-C level were analysed. In addition, the possibility of SAR1B and apoB as biomarkers for the diagnosis of ICAS was also discussed.

Eighty patients with acute ischemic stroke were selected in our hospital from Jan 2016 to Jun 2016.

Exclusion criteria: (1) Patients with cardiogenic stroke or stroke caused by other causes or unexplained causes; (2) Patients with a history of systemic disease, including cancer, collagenosis, metabolic diseases (diabetes was not included); (3) Patients with incomplete clinical data.

Patients were divided into three groups according to the results of imaging examination and other clinical data:

This study was approved by the ethics committee of our hospital. All the patients signed informed consent. All the operations were performed in strict accordance with ‘Declaration of Helsinki’.

Fasting elbow venous blood (3 ml) was extracted from each participant. Blood samples were subjected to centrifugation (3000r) at 4°C to separate serum. Serum samples were stored at -70°C before use.

All data were processed by SPSS19.0 software. Measurement data were expressed as mean ± standard deviation, and the comparisons between groups were performed by independent two-sample t-test. Linear correlation was analysed by Pearson correlation coefficient analysis. p<0.05 was considered to be statistically significant. 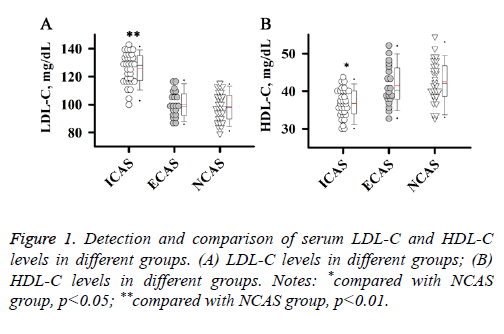 Detection and comparison of serum SAR1B, apoB and MTTP levels in different groups

ApoB, MTTP and SAR1B, which are involved in the formation or secretion of chylomicrons, can affect the level of LDL-C. Therefore, we further detected levels of serum SAR1B, apoB and MTTP in different groups of patients.

Results showed that apoB and SAR1B levels were increased significantly in ICAS group compared with NCAS group (p<0.01), while no significant differences were found between ECAS and NCAS groups.

There were no significant differences in MTTP level among ICAS, ECAS and NCAS groups. Those results suggest that increased apoB and SAR1B levels were specific to patients with ICAS (Figure 2). 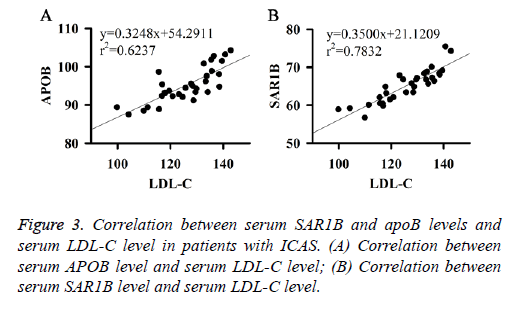 The results in this study indicate that SAR1B and apoB can be used as biomarkers for the diagnosis of ICAS. Therefore, the correlations between SAR1B and apoB levels and diagnostic results of ICAS by MRA were analysed. MRA diagnostic score of patients with ICAS was estimated according to a previous study [16].

ROC curve analysis (Figure 5) showed that, independent expression levels of SAR1B and apoB, which are consistent diagnostic results of MRA, can be used as biomarkers of ICAS. 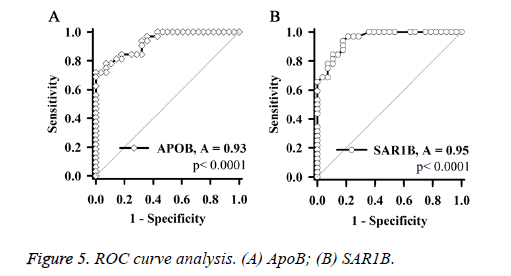 Lipid disorder is a classic risk factor for atherosclerosis [17]. It has been reported that changes in lipid profiles were closely related to the progression of ICAS [18]. Lipoproteins, which are made up of fats and a single layer of phospholipid molecules, are responsible for the transportation of most lipids except free fatty acids. Based on density, lipoproteins can be divided into five groups including chylomicrons, low-density lipoprotein (LDL), VLDL and HDL. Previous studies have shown that HDL can mediate the reverse transportation of cholesterol from arterial wall cells to steroid genic organs and liver, indicating the anti-atherogenic function of HDL [19]. By contrast, other types of lipoproteins, such as LDL, are generally believed to be able to promote the development of atherosclerosis [8]. A recent large scale clinical study carried out in Chinese population have shown that, non-HDLC, which is the composite marker of LDL, is closely related to the progression of ICAS, and elevated level of non-HDLC can significantly increase the risk of the occurrence and development of ICAS [20]. In our study, level of LDL-C was found to be significantly higher in patients with ICAS than in patients with NCAS, while HDL-C level was lower in ICAS patients than in NCAS patients, indicating that LDL-C and HDL-C are involved in the development of ICAS. In addition, no significant differences were found in levels of LDL-C and HDL-C between ECAS group and NCAS group, suggesting that the changes of LDL-C and HDL-C levels are specific for patients with ICAS.

ApoB, SAR1B and MTTP play essential roles in lipid transportation and metabolism [11-15]. Therefore, those three factors may also have important roles in the progression of ICAS. Previous studies have shown that the expression of apoB was usually up-regulated in patients with ICAS and the increase in apoB/apoAI can be used to predict ICAS [12,21]. Sar1B, which is a member of SAR1-ADP ribosylation factor family, was also found to be involved in the pathogenesis of atherosclerosis [22]. However, based on our knowledge, the correlation between Sar1B and ICAS has not been reported. MTTP, which is essential for the assembling and secretion of LDL, was found to be able to promote the development of atherosclerosis, and inhibition of MTTP by implitapide can significantly slow down the development of atherosclerosis in apolipoprotein E knockout mice [23]. However, the specific role of MTTP in the pathogenesis of ICAS is still unknown. In our study, apoB and SAR1B levels were increased significantly in ICAS patients but not in NCAS patients, indicating that the levels of apoB and SAR1B were specifically positively correlated with the occurrence of ICAS. After detecting the levels of MTTP, no significant differences were found between groups, suggesting that MTTP may not be essential for the development of ICAS. ApoB is a major component of LDL and SAR1B is important for the formation and secretion of chylomicrons [11,15]. In our study, apoB and SAR1B levels were found to be positively correlated with the level of serum LDL-C, indicating that apoB and SAR1B can reflect the level of LDL-C in serum, which can be used to evaluate the status of ICAS.

The prevention and treatment of ICAS and ICAS induced stroke is hindered by the unclear pathogenesis [5]. So, the early diagnosis of ICAS is the key for the treatment. Previous studies have shown that biomarkers of inflammation including PAI-1 and hsCRP were correlated with the stroke caused by ICAS. In addition, reduced number of circulating progenitor cells is also found to be associated with the increased risk of recurrent stroke in patients with ICAS [6]. However, individual differences hindered the popularization of those biomarkers in clinical practice. In our study, apoB and SAR1B levels were found to be specifically increased in ICAS patients but not in other patients, indicating the potential role of ApoB and SAR1B in predicting ICAS. Were further test the accuracy of apoB and SAR1B as biomarkers for the diagnosis, the results showed that expression levels of SAR1B and APOB were consistent diagnostic results of MRA, indicating that ApoB and SAR1B levels can be used to accurately predict ICAS. We also compared the distribution of age, gender, blood pressure, and blood glucose, and a variety of physiological and biochemical index, but no significant differences were found in-between groups, indicating that those factors cannot be used as specific biomarkers from ICAS.