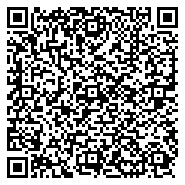 Cardiac arrest is a major cause of morbidity and mortality worldwide [1], and patients who survive cardiac arrest often develop severe neurological dysfunction due to hypoxic brain injury and reperfusion-induced cell death [2]. Cardiopulmonary resuscitation (CPR) remains the most commonly used resuscitation method for cardiac arrest (CA) [3], and it has been one of the most important determinants of patient survival. However, the quality of CPR, which is related to the depth and frequency of chest compressions [4], always determines the prognosis of CA [5]. On the other hand, standard CPR (S-CPR) can cause many complications including thoracic rib fractures and gastric rupture [6-12]. In addition, although open chest cardiac compression is thought to achieve better outcomes [13], it can also cause major damage and serious postoperative complications.

Additionally, when CA happens during special situations such as open operation, S-CPR disable to act as a thorax pump and fails to ensure the blood supply to major organs because the abdominal cavity is open. Furthermore, the clinical success rate of resuscitation is low (about 10%) and the survival status of patients after resuscitation is not satisfying [14,15]. Therefore, although researchers worldwide have investigated several methods to improve clinical outcomes, they have seen little success [16,17]. Thus, our study aimed to provide theoretical evidence for the clinical applications of diaphragmatic muscle CPR (D-CPR) by comparing the effects of D-CPR and S-CPR on the circulatory function of rabbits before and after resuscitation.

Twenty New Zealand rabbits weighing between 2.0 kg and 3.5 kg (irrespective of the sex) were provided by the animal experimental center of the General Hospital of the People's Liberation Army. The rabbits were randomly assigned into the D-CPR group (n=10) or the S-CPR group (n=10). Ketamine and sumianxin were used to induce anesthesia, the neck trachea was intubated, and the rabbits were connected to a ventilator. A multifunctional physiological monitor was connected to the left carotid artery and the right jugular vein to monitor ascending aortic pressure and right atrial pressure. The electrocardiogram (ECG) results and transcutaneous oxygen saturation (SpO2) levels were monitored during the operation. The ear vein was intubated for transfusion and drug administration. The trachea was clipped at the end of an exhalation to initiate asphyxia. CA was considered successful if the ECG displayed obvious ventricular fibrillation waveforms or a flatline accompanied by a mean arterial pressure (MAP) less than 15 mmHg (1 mmHg=0.133 kPa) and the disappearance of arterial pressure differences or if the monitor displayed an arterial line waveform. We conducted D-CPR or S-CPR exactly 8 min after asphyxia with a massage frequency of 180-200 per min. We simultaneously used a ventilator to assist respiration (frequency: 40 per min, tidal volume: 20 ml/kg, concentration of inspired oxygen: 100%). After 2 min of massage, resuscitation drugs (adrenaline: 0.1 mg/kg, atropine: 0.05 mg/kg) were administered. After 5 min of massage, electric defibrillation was used if there was a ventricular fibrillation waveform on the monitor.

The ventilation mode, respiratory parameters, abdominal incision procedures, and salvage drugs were the same for both cardiac compression methods. For the S-CPR group, the compression depth is that resulting in the thoracic sagged to 1/3-1/2 of its thickness. For the D-CPR group, three or four fingers were inserted into the diaphragm below the heart (the finger pulp was used to place sterile gauze to prevent the fingertips from tearing the diaphragm because of uneven force), and the heart was crimped to the chest wall with a range of 2-3 cm. ROSC was successful when the ECG monitor indicated that the superventricular rhythm was recovered and the MAP was greater than 25 mmHg for more than 1 min.

The statistical software used in this study was SPSS 15.0. The results are displayed using the mean ± standard deviation (x̄ ± s). A t-test was adopted for comparisons among groups, a repeated-measures ANOVA was used for comparing data that changed over time, and a chi-square test (exact probability method) was adopted for categorical data. A P<0.05 was considered statistically significant.

Comparison of the baselines values between the two groups

Comparison of ROSC between the two groups

Table 2: The distribution of survival time of animals from D-CPR group and S-CPR group.

Change in hemodynamics 15 min after resuscitation 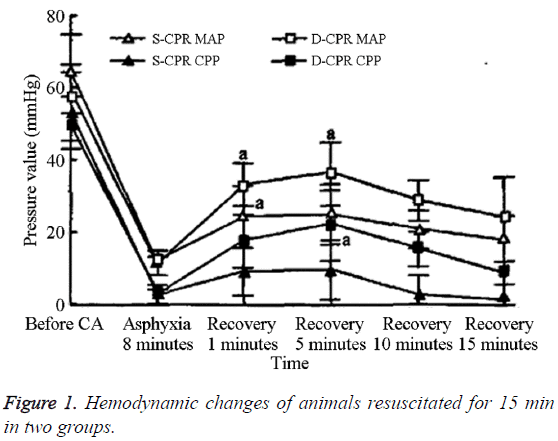 Table 3: Comparison of the change of hemodynamic in 15 min after resuscitation between two groups (xs).

Table 4: The ratio of measures and their basic values at different times. 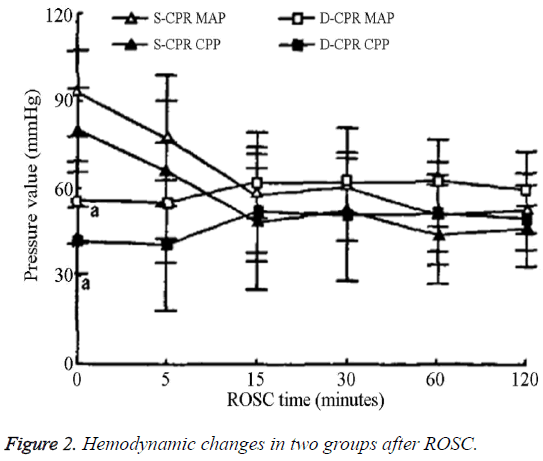 Autopsy reports showed that one rabbit in the S-CPR group had pulmonary edema and two had multiple fractured ribs, one of which also had hepatic rupture. One rabbit in the D-CPR group had a diaphragmatic tear at the point of diaphragmatic compression because of the pressure applied directly to the diaphragm by the fingers; however, this situation did not occur after applying gauze at the compression point on the diaphragm.

Analysis of the change in hemodynamics

S-CPR is always used for CPR after clinical CA both domestically and abroad. However, experimental studies and clinical practice reveal that hemoperfusion for important organs is not very good for some patients and the success rate of resuscitation is below 30% [18], which might be related to the low perfusion pressure and low blood flow during the period of resuscitation [19-21].

Furthermore, in this study, the rates of ROSC were not significantly different between the D-CPR group and the SCPR group; however, this might be related to the small sample size. Our study also revealed that both the MAP and CPP values decreased after more than 5 min of resuscitation, which might be related to decreasing myocardial compliance due to a long cardiac ischemia and hypoxia duration.

Our study revealed that the AOS, AOD, MAP, and CPP values of the D-CPR group were significantly higher than those in the S-CPR group during resuscitation. This verifies that cardiac compression through the diaphragm could partially construct effective artificial circulatory support to maintain blood circulation and ensure hemoperfusion for important organs. The D-CPR can generate artificial circulation and ventilation via the thoracic, abdominal and heart pump mechanisms. DCPR results in upward and downward motion of diaphragm and pressure changes in the abdominal cavity, which actives the “abdominal pump”. The piston effect of the diaphragm in the thoracic and abdominal cavities then transmits pressure changes in the abdominal cavity to the thoracic cavity, inducing thoracic pressure changes which indirectly activate the “thoracic pump”. The anatomical relationship of the heart and the diaphragm then activates the “heart pump, which results in blood flow. In addition, adequate coronary perfusion pressure (CPP) is important for successful CPR, and abdominal compression can significantly increase CPP. An advantage of abdominal pumping on the chest is that it would promote some ventilation. So rhythmic diaphragm compression CPR provides effective blood circulation and some oxygen supplement. It may be the reason why D-CPR has better hemodynamic effects when compared to S-CPR.

In conclusion, the evidence provided in this study indicates that D-CPR results in better outcomes when compared to S-CPR. These results provide additional experimental supporting the popularization of D-CPR in clinical practice. However, the situation in clinical practice is complicated and variable, and animal models cannot completely mimic a real clinical situation. Therefore, additional, large-scale experiments are needed to verify the results of our experiment.