The determination of the protective role of sildenafil administration in rats with sepsis-in duced liver injury.

Sepsis is a complex syndrome which comes out after infection, characterized by activation of inflammation and infection and has a high morbidity and mortality. Sildenafil (SLD) is a selective Phosphodiesterase Type 5 (PDE-5) enzyme inhibitor and is used in the treatment of erectile dysfunction effectively all over the world. In this study, we investigated whether sildenafil had protective effect or not by studying the effect of sildenafil on reactive oxygen species and antioxidants in Cecal Ligation and Puncture (CLP) polymicrobial sepsis model in rat liver histopathologically and biochemically. Rats were divided into four groups: 1) 10 mg/kg SLD given CLP group; 2) 20 mg/kg SLD given CLP group; 3) CLP group; 4) SHAM operated group. CLP polymicrobial sepsis model was applied to the rats. All rats in our study were sacrificed by overdose general anesthetic after 16 hours (thiopental sodium, 50 mg/kg). Specimens of rat liver were analyzed histopathologically and biochemically. In the study, Superoxide Dismutase (SOD) and Glutathione (GSH) parameters were measured to indicate the antioxidant activity in liver during sepsis. To evaluate the oxidant activity, Myeloperoxidase (MPO) and Lipid Peroxidation (LPO) parameters were measured in liver tissue. SOD and MPO activities and GSH and LPO levels were high in CLP polymicrobial sepsis model when compared to SHAM group (P<0.05). In all sildenafil groups, GSH levels were high when compared to CLP group. In 20 mg/kg sildenafil given sepsis group, high GSH levels were observed according to SHAM group. In addition, while all sildenafil dose groups had a significant decrease versus CLP group in LPO levels (P<0.05), they had a significant increase in MPO activities. In 20 mg/kg sildenafil administrated rats, an improvement observed in biochemical parameters. In this study, SOD and MPO activities which were low in SHAM group increased in CLP polymicrobial sepsis model. When SLD administrated, MPO activity increased in both SHAM and CLP groups. In this study, GSH and LPO levels also increase in septic liver tissue. When SLD administrated to SHAM group, it increased protective GSH level and decreased detrimental LPO level. In histopathological examination, it was observed that 10 mg/kg sildenafil administration had a curative effect in liver tissue partly. In conclusion, it was shown that acute sildenafil administration decreased liver damage in septic rats dose-dependently in this study. In addition, it was observed that it corrected the broken oxidant-antioxidant balance. This might mediate the protective effect of sildenafil in liver. But we believe that new experimental and clinical studies should be in future to understand the protective effect of sildenafil in liver.

Sepsis is a complex post-infection syndrome characterized by coactivation of inflammation and coagulation. These events are manifested with systemic inflammatory response syndrome or sepsis symptoms through proinflammatory cytokines, procoagulants, and adhesion molecules released

from immune system or damaged endothelial cells [1]. In the prognosis of sepsis, cytokines, coagulation system activation and consequent organ failures are observed. The role of oxidative stress was also reported in sepsis induced organ damage [2]. Free oxygen radical formation due to sepsis and endotoxemia are very significant in the release of proinflammatory cytokines, which are important in acute inflammatory response associated with sepsis [3-6]. Liver plays a key role in sepsis pathology. Sepsis-induced liver dysfunction may cause multiple organ failure or ameliorate multiple organ failure [7]. Thus, prevention of sepsis-induced liver failure is important in treatment. Sildenafil (SLD) is a selective Phosphodiesterase Type 5 (PDE-5) inhibitor agent in pulmonary hypertension. Its beneficial effects on pulmonary hypertension suggested that this medicine may also contribute to hepatic perfusion, and it was demonstrated that sildenafil had significant positive effects on hepatic hemodynamic parameters in a study [8]. In animal studies, it was also shown that sildenafil protected alveolar growth and angiogenesis and reduced inflammation [9,10]. It was demonstrated in biochemical and histopathological studies that sildenafil had a protective effect on both lung and kidney tissues by reducing oxidative stress and supporting the antioxidant system [11]. However, there is no study in the literature that investigated the effects of sildenafil on sepsis-induced liver damage.

Twenty-four 220-250 gr male Wistar rats were used in the study. The rats were procured from Atatürk University Animal Laboratory and Research Center (ATADEM).

Rats were distributed into 4 groups. Each group included 6 rats.

Cecum Ligation Perforation (CLP) polymicrobial sepsis model was applied to the rats. In the present study, rats in all groups were terminated with general anesthesia overdose after 16 hours (thiopental sodium, 50 mg/kg). The rat liver specimens were incised and placed in iced saline solution. Half of the liver was stored at -80 °C in the biochemistry laboratory and the other half was stored in 10% formalin solution for histopathological tests. At the end of the study, the obtained rat livers were rapidly examined macroscopically and then the tissues were stored at -20°C for biochemical assays. Tissue enzyme activities were analyzed within three days the latest. Superoxide Dismutase (SOD) and Myeloperoxidase (MPO) activities and Glutathione (GSH) and Lipid Peroxidase (LPO) levels were measured in the supernatants obtained from liver tissue homogenates with adequate methods reported in the literature. All measurements were conducted at ambient temperatures. SOD activity was determined based on the method described by Sun et al. Myeloperoxidase activity was determined based on the method described by Bradley et al.

The mean and standard deviation values for the group numerical data were calculated and presented in tables. Statistical analyzes were conducted with SPSS 12.0 for Windows software. The intergroup comparison was conducted with one-way analysis of variance (ANOVA) and Duncan's Multiple Range Test (DMRT). Data with a P value of less than 0.05 were considered significant.

There are no significant differences between the data in the same column based on Duncan (<=0.05) test. N: Number of rats

Sham group findings: Examination of the control group liver sections demonstrated that the contours of the vena central located at the center of hepatic lobules were regular, the hepatocytes emerging therefrom were arranged radially to form the Remark cords, and the sinusoids that were paved with endothelia between the hepatocytes allowed the passage of 1 or erythrocytes (Figure 1a). In the periphery of the hepatic lobule, the portal area included the hepatic arteriole and the branch of the bile duct and inflammatory cells were observed between them. Periportal hepatocytes that emerged from the portal area formed cords with regular contours and surrounded the endothelia-surrounded sinusoids (Figure 1b). 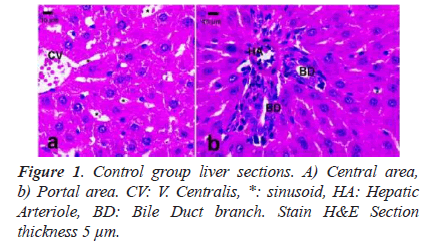 CLP group findings: Examination of CLP group liver sections (Figure 2a) demonstrated that the eosinophilic staining was more visible in hepatocytes cytoplasms when compared to the control, the cell membrane contours became more irregular (Figure 2b), the sinusoids narrowed and inflammatory cells such as neutrophils, lymphocytes were present in the sinusoids, and hyperchromatosis and degeneration were observed in the nuclei of the endothelial cells that paved the sinusoids and in hepatic arterioles and central vein. Furthermore, mild congestion and occasional apoptotic hepatocytes were noted (Figures 2c and 2d). 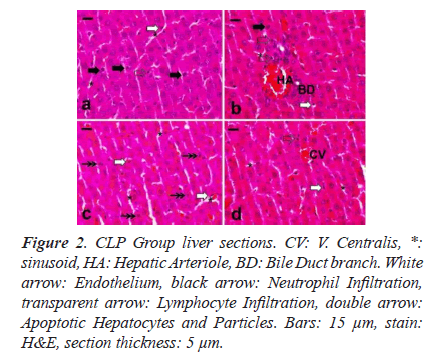 CLP+10 mg/kg sildenafil administered group findings: Examination of the central vein and sinusoids demonstrated mild congestion and intra-sinusoidal lymphocytes in both. However, both congestive and intrasinusoidal inflammation was significantly reduced when compared to the CLP group. Hepatocytes in this region had eosinophilic cytoplasm (Figure 3a). Examination of the portal area also demonstrated mild inflammation with mild congestion (Figure 3b). Thus, it can be argued that the administration of 10 mg sildenafil expressed certain healing effects on the liver. 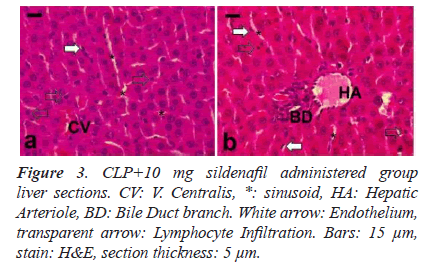 CLP+20 mg/kg sildenafil administered group findings: Examination of the central vein and its vicinity demonstrated higher basophilic staining and although endothelial sinusoids were visible similar to the control group, these did not contain inflammatory cells. Central vein and sinusoids were regular, and the examination of the portal area demonstrated no inflammation. Hepatocytes were more basophilic and closer to control when compared to those in the CLP treated and 10 mg sildenafil administered group (Figures 4a and 4b). 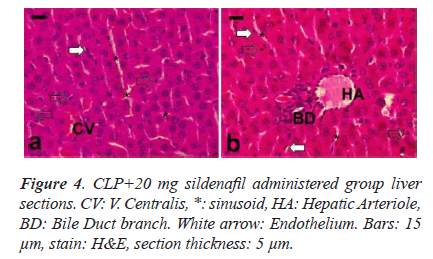 In experimental studies, it was demonstrated that sepsis and endotoxemia led to the production of free oxygen radicals [4,12]. In a study by Blackwel et al. [5], free oxygen radicals were demonstrated to cause the release of proinflammatory cytokines and mediators, which play a significant role in sepsis pathophysiology, and to produce acute inflammatory response in sepsis. It was also suggested that endotoxemia and sepsis reduce the endogenous antioxidant and deteriorate oxidant antioxidant balance [6]. Among the proinflammatory effects of free oxygen radicals are endothelial damage, formation of chemotactic factors, cytokine release, mitochondrial damage, which is due to the increase in free oxygen radicals and the resulting imbalance between free oxygen radicals and oxidantantioxidant capacity [13-15]. In a study that investigated the role of the oxidative system in sepsis, Köksal et al. studied the correlation between plasma and tissue malonaldehyde (MDA) and GSH levels and oxidative stress and antioxidative response in late-stage sepsis. As a result, they found that there was a positive correlation between plasma MDA and GSH concentrations and tissue MDA and GSH levels in the intraabdominal sepsis model. Based on their findings, it was suggested that free oxygen radicals play an important role in sepsis pathophysiology in CML sepsis model [16]. In a study by Sakaguchi et al., cell membrane damage and lipid peroxide formation in liver were examined after salmonella endotoxin administration in rats. In the study, it was demonstrated that liver lipid peroxide levels increased after endotoxin administration when compared to the control group, and liver lipid peroxide levels returned to normal levels 2 days later. In the same study, it was shown that SOD level dropped 18- 48 hours after endotoxin administration and then started to rise. Glutathione reductase and glutathione peroxidase activities were shown to decrease 18 h after endotoxin administration. In the study, lower lipid peroxide formation was observed in the liver of the endotoxin administered group when compared to the control group. As a result, it was shown that lipid peroxide formation that occuured with liver cellular damage induced by endotoxemia was caused by free oxygen radicals [17]. In the present study, it was found that SOD and MPO activities, GSH and LPO levels were higher in the CLP polymicrobial sepsis group when compared to the SHAM group. Furthermore, GSH and LPO levels were also high in septic liver tissues. In a study that investigated the effect of sildenafil on the oxidant-antioxidant system in the liver, it was shown to reduce tissue MDA levels, MPO activities, and serum pro inflammatory cytokines and maintain GSH levels [18]. Decrease in the tissue lipid peroxidation levels can be interpreted as a beneficial effect of sildenafil via the oxidant antioxidant balance [18]. In a study by Karakoyun et al., the impact of sildenafil on tissue integrity, oxidant antioxidant balance and cellular apoptosis was demonstrated through experimental colitis in rats. The beneficial effects of sildenafil were demonstrated on oxidant-antioxidant balance, superoxide production to cell apoptosis and cytokine release through a nitric oxide dependent mechanism [19]. In a study conducted by Çadirci et al. [11], different doses of sildenafil were administered to different groups. Study results demonstrated that sildenafil administration decreased oxidant-antioxidant balance and lowered TNF- ± level. This was reported be related to its preventive effect against tissue damage in lung and kidney tissues. In this study, similar to the present study, the protective effect of sildenafil against septic liver by correcting the impaired oxidant-antioxidant balance was reported.

In conclusion, the present study demonstrated that sildenafil treatment decreased the hepatic damage based on the dose and regulated the impaired oxidant-antioxidant balance in septic rats. This might be through the mediating protective effect of sildenafil on the liver. This study is one of the rare studies that investigated the effects of sildenafil on sepsis-induced liver damage, thus exhibiting the significance of the present study. However, we believe that future experimental studies and clinical trials should be conducted to better understand the protective effects of sildenafil on liver.