Breast cancer is the type of cancer that kills more women in the world and the conventional cancer treatment has high costs and many side effects. The bioactive compounds from diet alone or in combination with others substances may be a potential source for the prevention and treatment of breast cancer. The aim was to investigate the effect of curcumin, piperine and resveratrol alone and associated in MCF-7 and MDA-MB-231 breast cancer cells culture. Curcumin, piperine and resveratrol showed cytotoxicity for MCF-7 and MDA-MB-231 cells with IC50 values of 24.50 μM, 94.50 μM and 131.00 μM, and 23.30 μM, 276.00 μM and 306.00 μM, respectively. The combination of curcumin+piperine, curcumin+resveratrol, piperine+resveratrol showed synergy in MCF-7 cells, and piperine+resveratrol in MDA-MB-231 cells. We conclude that the combination of bioactive compounds presents in diet as curcumin, piperine and resveratrol is better than used in isolated forms, and these results may be useful in future clinical trials with breast cancer.

Cancer is one of the leading causes of death worldwide. According to WHO in 2015, there were 8.8 million deaths and breast cancer contributed 571.000 deaths. Breast cancer is the type of cancer that kills more women in the world, particularly in low- and middle-income countries [1]. Current treatments for cancer include cytotoxic chemotherapy. However, some limitations are observed as high toxicity, in which it implies many adverse effects, but contributes to the survival of the patient [2].

Previous studies have demonstrated that bioactive compounds are a promising source to search for novel drugs for the treatment of various diseases. Curcumin (1,7-bis(4-hydroxy-3- methoxyphenyl)-1,6-hepta-diene-3,5-dione) is a lipophilic phenolic compound extracted from the rhizome of turmeric and possess various biological effects such antioxidant, antiinflammatory, antimicrobial and anticancer [3-5]. Piperine {1- [5-(1,3-benzodioxol-5-yl)-1-oxo-2,4-pentadienyl]piperidine} is an alkaloid found in the fruits of Piper nigrum L. and possess various biological effects such as antioxidant, antiinflammatory and anticancer [6-9]. Resveratrol (3,4 ’ ,5- trihydroxy-trans-stilbene) is a naturally occurring polyphenol found in several edible natural products, including grapes, berries, peanuts and in a number of herbal medicines [10]. Besides has been shown to possess antioxidant effect, anti-inflammatory, anti-Leishmaniaamazonensis and as well chemoprevention of cancer [11-14]. The structures of these molecules are shown in the Figure 1. 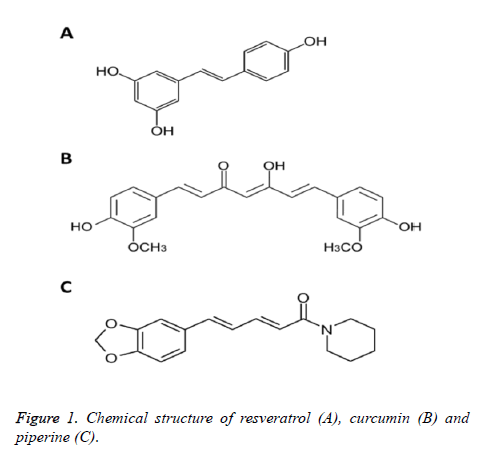 Figure 1: Chemical structure of resveratrol (A), curcumin (B) and piperine (C).

Unless otherwise stated, all reagents were of analytical grade from Sigma-Aldrich (St. Louis, MO, EUA).

Monolayer cultures of human breast carcinoma MCF-7 and MDA-MB-231 cells were obtained from American Type Culture Collection (ATCC) and were grown in DMEM supplemented with 10% FBS, 100 units/mL of penicillin, 100 μg/mL of streptomycin and 5 μg/mL of insulin; the cells were kept at 37°C in a humidified atmosphere of % CO2 in air. When the cultures reached 70%-80% confluence, the cells were treated with various concentrations of resveratrol, piperine and curcumin or both compounds in associations for 24 hours.

The cell viability assay was performed using MTT assay [13]. After treatment, the cells were washed with phosphate buffered saline (PBS) and then incubated for 3 h in 0.5 mL of MTT solution (0.5 mg/mL of PBS) at 37°C in 5% CO2 in an incubator, and then 500 μL isopropanol was added to each well to dissolve the resulting formazan crystals. The absorbance was measured at a wavelength of 570 nm. The results are expressed in percentage of viable cells compared to untreated control.

IC50 were calculated according to a nonlinear regression using a second-order polynomial equation, with 95% confidence intervals, using Graph Pad Prism 5.0 software. The results were expressed as the IC50 standard error of the mean (SEM). The data were analysed by Student’s t test when comparing two groups or by one-way analysis of variance (ANOVA) for more than two groups. p values of 0.05 were considered significant.

Curcumin, piperine or resveratrol treatments on cellular viability of MCF-7 and MDA-MB-231 cells

In the present study, we investigated the cytotoxicity in the presence of different concentrations of compounds (curcumin, piperine or resveratrol) on MCF-7 cells evaluated by MTT method. As shown in Figure 2A, resveratrol, curcumin and piperine presented a dose-dependent cytotoxic effect on MCF-7 cells. In order to evaluate the effect of the compounds on other breast cancer cell line, we performed the MTT viability assay on MDA-MB-231 cells. As shown in Figure 2B, resveratrol, curcumin and piperine also presented a dosedependent cytotoxic effect on MDA-MB-231 cells; however curcumin showed greater inhibition (56.1%) from the concentration of 25 μM than resveratrol and piperine.Our results showed that curcumin, piperine or resveratrol reduced MCF-7 and MDA-MB-231 cells viability after 24 hours of treatment, with IC50 values of 24.50 μM, 94.50 μM and 131.00 μM; and 23.30 μM, 276.00 μM and 306.00 μM, respectively (Table 1). 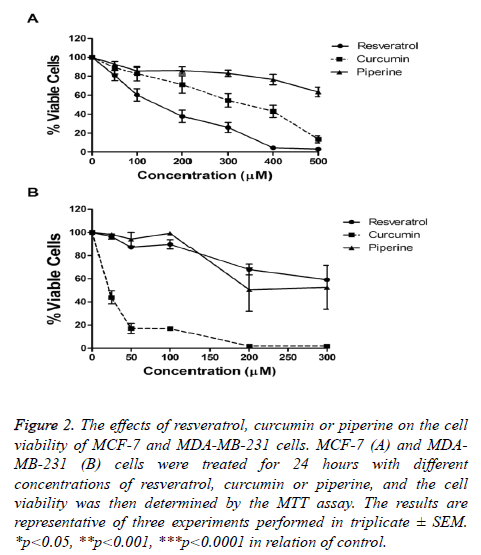 Figure 2: The effects of resveratrol, curcumin or piperine on the cell viability of MCF-7 and MDA-MB-231 cells. MCF-7 (A) and MDAMB- 231 (B) cells were treated for 24 hours with different concentrations of resveratrol, curcumin or piperine, and the cell viability was then determined by the MTT assay. The results are representative of three experiments performed in triplicate ± SEM. *p<0.05, **p<0.001, ***p<0.0001 in relation of control.

Table 1: Analysis of IC50 values obtained after treatment with various concentrations of curcumin, piperine or resveratrol for 24 hours.

Effect of curcumin, piperine and resveratrol in association on cellular viability of MCF-7 and MDAMB- 231 cells 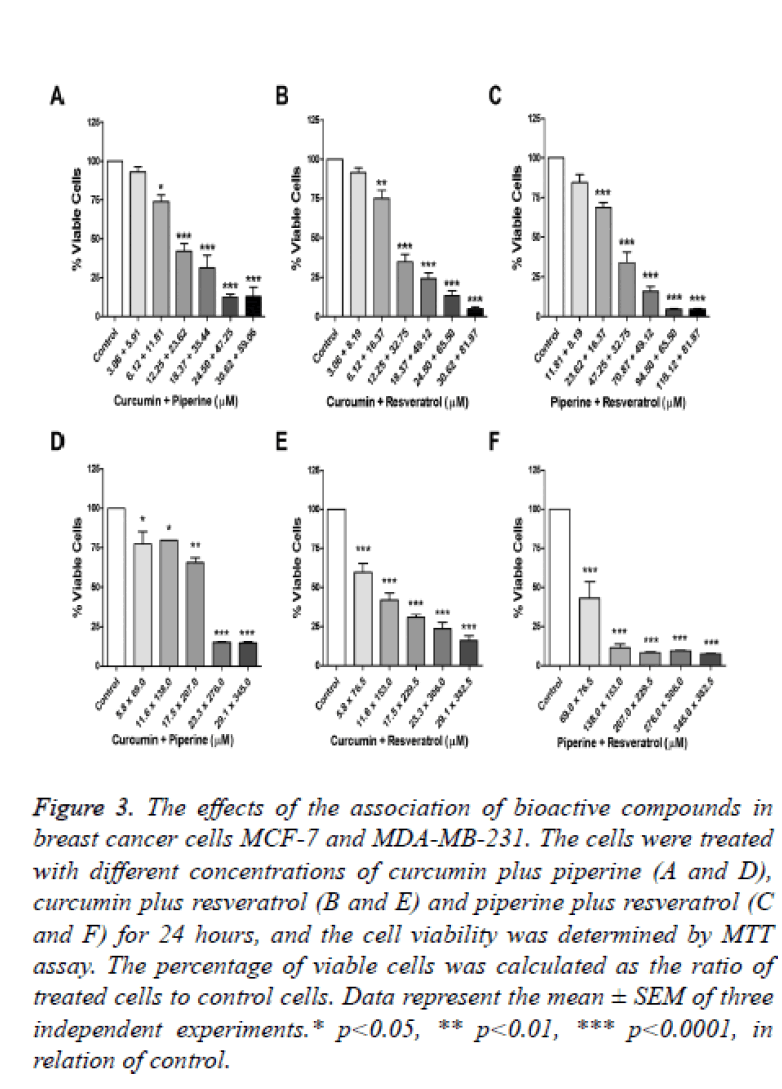 Figure 3: The effects of the association of bioactive compounds in breast cancer cells MCF-7 and MDA-MB-231. The cells were treated with different concentrations of curcumin plus piperine (A and D), curcumin plus resveratrol (B and E) and piperine plus resveratrol (C and F) for 24 hours, and the cell viability was determined by MTT assay. The percentage of viable cells was calculated as the ratio of treated cells to control cells. Data represent the mean ± SEM of three independent experiments.* p<0.05, ** p<0.01, *** p<0.0001, in relation of control.

Table 2: Combination index analysis of the associations of curcumin, piperine and resveratrol in MCF-7 and MDA-MB-231 cells.

Natural products play an important role in the treatment of several pathologies, among them cancer [18]. The use of combination of natural products and chemotherapeutic agents, in reduced concentrations, is associated with a decrease in toxic effects and an improvement in treatment efficacy [19,20]. The inhibitory effect of curcumin, piperine or resveratrol treatments has been described on several types of tumour cells. Previously, we have reported that resveratrol in association with melphalan enhanced the cytotoxic effects on MCF-7 and MDA-MB-231 cells in vitro, with 1.67-time more pronounced effect on MCF-7 cells [13]. Patel and colleagues [21] demonstrated that the combination of curcumin and citral, a lemon essential oil, induced death by apoptosis with activation of the p53 protein in MCF-7 and MDA-MB-231 cells. Bayet- Robert and colleagues [22] performed a clinical phase I dose escalation trial of combination docetaxel chemotherapy with curcumin in advanced and metastatic breast cancer patients, and showed that combination of curcumin plus docetaxel has antitumor activity and a superior response rate in comparison to monotherapy with docetaxel. The combination of piperine and paclitaxel produces synergistic effects in ovarian adenocarcinomas SKOV-3 cells, through loss of membrane integrity of mitochondria leading the cells to apoptosis [23].

Drug association therapy has several important advantages as reduced dosages and treatment duration, lower treatment costs and decrease drug resistance development, besides the associations of natural products in cancer are fundamental, because they act in inhibition of cell growth, viability, invasion, migration and autophagy, among others [19]. Our data showed for the first time that the combination of curcumin +piperine, curcumin resveratrol and piperine+resveratrol has a synergistic effect against MCF-7 cells, and piperine +resveratrol has a synergistic effect against MDA-MB-231 breast cancer cells. Shoba and colleagues [28], described that piperine increases the serum concentration and the oral bioavailability of curcumin in rats and humans. The curcumin has also been shown to act synergistically with piperine in the suppression of hepatocellular carcinoma in rats, and this effect might be owing to increased bioavailability of curcumin in the presence of piperine [29]. Recently, the combination of resveratrol and curcumin has been shown to induce apoptosis in MCF-10A-Tr cells (cigarette smoke condensate-transformed breast epithelial cell line) through p21Waf1/Cip1 mediated inhibition of the Hedgehog-Gli cascade [30,31].

In conclusion, we can affirm that the combination of bioactive compounds present in diet as curcumin, piperine and resveratrol, may be useful as possible application in future clinical trials with breast cancer.