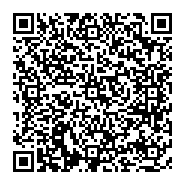 Background: Typhoid fever caused by the Salmonella typhi is a communicable disease and still a major health concern in developing countries. This study was carried to access the disease burden in Gujrat, Pakistan and associated risk factors.

Results: The typhoid incidence seems higher in females 52.62% as compared to males 47.38. 160 patients (42.32%) belong to age group 21-30 years. 82.46% patients were suffered from typhoid infection during summer season (July-September). 64.81% of patients got infectioned are non-vaccinated and 58.37% are drinking non-filtered water. Most of the patients (76.17%) were got typhoid fever infection once. In our study majority of patients 61.24% were diagnosed early. Maximum 101 patients get rid of typhoid fever after two weeks of medication. The main complain observed was fever follow by diarrhoea cases and abdominal pain with 99.7%, 98.95% and 98.42% prevalence respectively.

Conclusion: The age group 21-30 was highly affected by typhoid infection. Water quality, vaccination and season have great impact on burden of typhoid fever in population. Fever, diarrhoea and abdominal pain are the major symptoms associated with typhoid fever.

The epidemiology of typhoid fever was started from the typical study by Austin [7]. Recent data show the annual load of disease to be 21 million cases throughout the world with over 200 000 deaths due to typhoid fever [7]. Before this it was observed to be 16 million with over 600 000 deaths [8,9] and in 2006, The World Health Organization (WHO) measured frequency of 16 to 33 million typhoid fever episodes globally each year, with 500,000 to 600,000 deaths and case fatality rate of between 1.5 and 3.8% [10]. This obviously indicates an increase in morbidity with a decrease in mortality. The death rate of typhoid fever is highest in Asia with 93% of the global infectious episodes. Asia also has the highest regional frequency rate of 274 cases per 100,000 population, which is ﬁve times greater than the second highest, Latin America [7]. Southeast Asia has an incidence of 110 cases/100,000 population, which is the third highest occurrence rate for any region [7]. Pakistan falls into this region. On the Indian subcontinent, Pakistan has the highest incidence (451.7 per 100,000 persons/year) of typhoid fever followed by India (214.2 per 100,000 persons/year) [11].

Contaminated food [12-14] and water [13,15,16] have been recognized as the major associated risk factors for typhoid prevalence. According to study in 2003, water bore infections causes 250,000 deaths every year in Pakistan among which typhoid fever is the foremost cause [17]. A number of other risk factors have been studied in different endemic settings such as poor sanitation [18] close contact with typhoid cases or carriers [19], larger household size, level of education, closer location to water bodies [19,20], flooding [21], personal hygiene [15], poor life style [22], and travelling to endemic areas [23]. In addition, climatic related factors such as, rainfall; vapor pressure and temperature have a major effect on the burden and distribution of typhoid infections in human populations [15,24].

Population-based data from Pakistan are rare; many hospital-based surveillance studies from different areas of the country have constantly shown a very high frequency of typhoid fever, especially in the younger age groups. Seasonal variations also have significant epidemiological interest in typhoid fever [25,26].

Epidemiological surveillance study of S. typhi is vital for population health management to identify factors that are responsible for the outbreaks, transmission method and pattern, and associated risk factors responsible to the persistence and spread of typhoid fever in this high risk area. However improved water quality and sanitation can be the ultimate solutions to this problem, vaccination in high risk areas is a possible control strategy recommended by WHO for the short-to-intermediate term [27].

The objective of this study was to analyse the present situation of typhoid and to classify the factors behind the still common episode of the disease, in district Gujrat, Punjab, Pakistan. This is the first surveillance report on typhoid fever epidemiology and risk factor assessment in this district. Results from this study will provide useful information about the sanitation, health and diagnostic facilities of the district. Findings of this surveillance report are helpful in the management of typhoid fever. These results can also help to shape policy for setting the priority of public health programs to reduce typhoid mortality by launching specific immunization programs or improving health, diagnostic and sanitation facilities of the district.

The survey was carried out from different public and private sector hospitals of District Gujrat, Punjab, Pakistan within time frame of May 2015 to June 2016. About 140 patients were served from Aziz Bhati Teaching Hospital, Bhimber Road Gujrat. Sixty patients were served from Gujrat Hospital, Bhimber road Gujrat. From other hospitals named Doctor’s Hospital, Jail chowk, Gujrat, City Hospital, Jail chowk, Gujrat and Ikram Hospital, Bhimber road, Gujrat patients about 60, 73, 54 and 55 respectively were participated in the study. All information needed related to typhoid fever its prevalence and associated risk factors were documented through a semi structured questionnaire. The questionnaire contained information related to prevalence, epidemiological factors and clinical presentation of the fever. Questions were asked about name, age, sex, place of birth, water quality of drinking water, vaccination record, number of infection episodes, season of infection, stage of diagnosis, recovery duration and major symptoms associated with typhoid fever observed by the physician or patient. 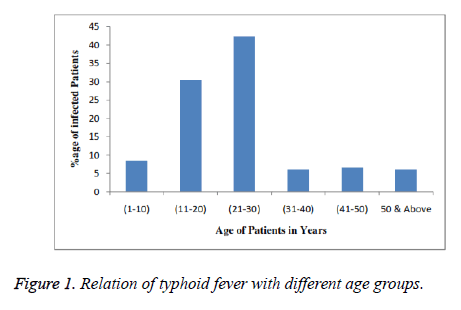 Results show marked variation in number of typhoid cases during different months of year. In summer season (July-September) 82.46% (n=315) patients was suffered from typhoid infection which is maximum number of patients whereas in winter (December-February) and autumn (October-November) 14.92% (n=57) and 1.092% (n=4) patients respectively indicating minimum number in autumn. Only 6 (1.57%) were got typhoid fever in spring season (Figure 2). 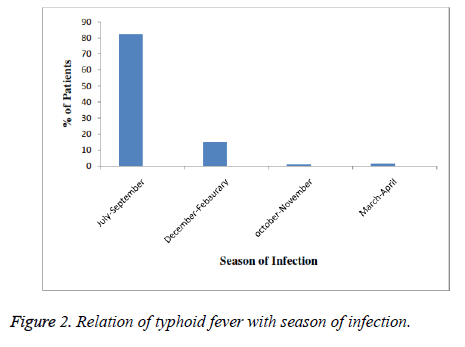 Figure 2: Relation of typhoid fever with season of infection.

Role of water quality and vaccination 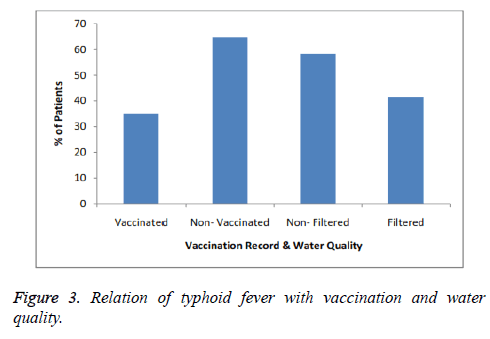 Figure 3: Relation of typhoid fever with vaccination and water quality.

Most of the patients got typhoid fever infection once as observed 76.17% (n=291). Although there is considerable percentage of patients who suffered recurrence of disease twice or thrice among served patients ranged from 16.23% (n=62) and 7.59% (n=29) respectively (Figure 4). 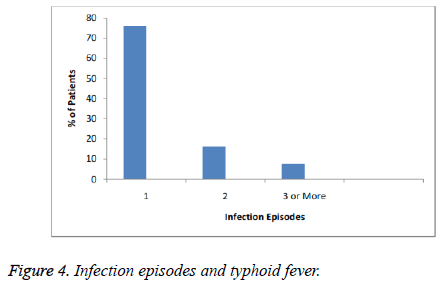 Diagnosed stage of any infection or disease is a good indicator of the health facilities of a particular area. In our surveillance study majority of patients 61.24% (n=234) were diagnosed early (within one or two weeks) whereas 21.95% (n=84) and 16.8% (n=64) were diagnosed middle (third week) and late (fourth and onward weeks) respectively (Figure 5). 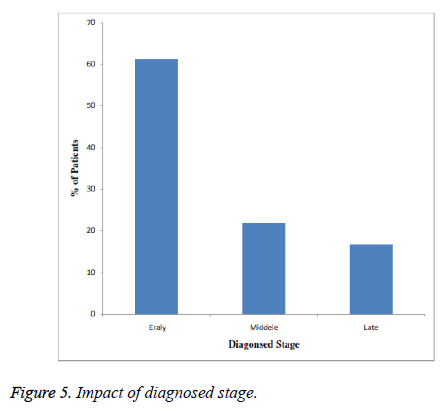 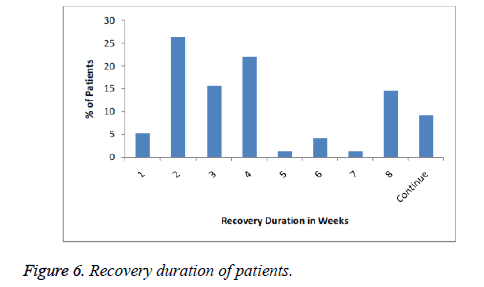 Typhoid fever is a potentially life threatening that is transmitted by the bacteria Salmonella typhi. Polluted water and contaminated food are the major sources of disease transmission. Typhoid is a severe health problem in developing countries [7] including Pakistan. In Pakistan, typhoid fever is endemic, major associated factors for high prevalence could be illiteracy, poverty, overcrowding, poor sanitation and insufficient facilities for safe drinking water supply [28]. In our study overall male (47.38%) to female (52.62%) ratio was 1:1 which suggest that typhoid fever is independent of sex. It affects both males and females of all age groups. Our finding was in accordance with the studies of Khan et al., Malik et al. and Jaafar et al. [29-31]. In this study most commonly observed symptoms (Table 1) of patients was Fever (99.7%) followed by diarrhoea (98.42%) and abdominal pain (96.85%). Our results were agreed with the results of Gamal et al. and Aatekah et al. [32,33]. Typhoid has been shown to be common among infants, young children and adults in Southeast Asia [19,30,34]. In our findings, typhoid was found in all age groups from 1-80 years old, but like other Southeast Asian countries, the age groups upto 30 years including children and young adults were more susceptible (Figure 1). Highest percentage of patients was observed in age group of 20-30 which was about 42.32% (n=160). This was in accordance to the report of Gamal et al. and Jaafar et al. [31,32]. One reason for age group 1-10 is that the undeveloped immune system in growing children makes them vulnerable to this enteric pathogen [31]. But in case of young’s belongs to age group 20-30 the possible reason is their unhygienic life style and junk food along with increased number of social gatherings [13]. Contaminated food was the major source of infection in young adults. The maximum prevalence of typhoid fever was recorded in summer season. Out of total 382 patients 82.46% (n=315) was got infected in summer season (Figure 2). The highest prevalence was reported in summer season in Indonesia and Pakistan (Karachi and Baluchistan) [7,28]. Eating locally prepared ice, ice creams and chilled drinks have been recognized as some of major associated risk factors for typhoid fever in children in Karachi in summer season as reported by Luby et al. [13]. Other associated factor may be flooding that lead to the incorporation of sewage and drinking water [28,35]. These two factors are responsible for the highest prevalence of typhoid fever in summer. The number of patients infected with typhoid fever was higher (58.37%) among those who drink non-filtered or poor quality water as compared to patients (41.63%) with the facility of filtered water (Figure 3). These results are in accordance to findings of Rahman et al. [36]. This was due to the reason that contaminated water is one of the major sources of S. typhi. [37-39]. The significance of reoccurrence of disease among (23.83%) patients was reported (Figure 4). Incomplete antibiotic dosage or treatment or weak immune system of the patient and possible resistant strains development could be the possible reasons of reoccurrence. In present study 61.24% patients were diagnosed early (1st or 2nd week) of typhoid infection in a clinical laboratory or hospital (Figure 5). This shows that the diagnostic facilities were satisfactory and people of that area were probably aware of these infectious diseases like typhoid fever. Recovery duration of patients from any disease was an indication of health and treatment facilities of a particular area. In this survey 101 patients were recovered from typhoid fever infection after 2 weeks of treatment which is an indication of satisfactory medical and health faculties provided to the people of that district. Vaccination plays an important role in the prevention of any disease especially infectious diseases. Risk of getting typhoid fever reduced to half in vaccinated against people (35.18%) as compared to non-vaccinated (64.82%) patients (Figure 3) [40,41].

It is concluded from above results that typhoid fever is affecting mankind irrespective of age and sex. Although the age group 21-30 was highly affected with this infection. Water quality, vaccination and season have great impact on burden of typhoid fever in population. Fever, diarrhoea and abdominal pain are the major symptoms /complications of the typhoid fever. Infection episodes, diagnoses stage and recovery duration plays a major role to study epidemiology and to evaluate the health measures of that particular area.

These observations support the decision to vaccinate population against typhoid fever. A combination of mass vaccination with improvement in water supply systems and sanitation is need of hour to control epidemics of typhoid fever in the high prevalence areas. Awareness should be created in young generation related to polluted water and hygienic food to eradicate this particular infection.