Stability of bovine serum albumin labelled by rhodamine B isothiocyanate

Preparation of the RBITC-BSA complex

A Sephadex G-75 column (Superfine, GE Healthcare, 2.6 cm diameter, 100 cm length) was equilibrated with phosphate buffer (8 g/L NaCl, 0.2 g/L KCl, 0.2 g/L KH2PO4•12H2O, pH 7.4), followed by loading of specimens at 4°C, and dialysis in the dark. The column was washed with PBS at a speed of 10 min/3 ml (constant flow pump BT100-1F, Baoding Lange Constant Flow Pump Co., Ltd) and 3 ml eluates were collected per tube (automatic collector BS-100A, Shanghai Qingpuhuxi instrument factory). The eluate corresponding to the first fluorescent band from the column was observed and recorded. After collecting approximately 500 ml of eluate, each tube was examined by an Ultraviolet (UV) spectrophotometer (Ultrospec 2100 pro, GE) and absorbance values at 280 nm were calculated.

Confirmation of the light absorption characteristics

In the RBITC-BSA complex, the RBITC and BSA were subjected to full wavelength scanning (190-900 nm) by the UV-visible spectrophotometer. The changes in the light absorption characteristics of RBITC-BSA, RBITC, and BSA were compared.

Preparation of specimens in vivo

Three milliliters of the RBITC-BSA complex was injected in healthy male Japanese rabbits weighing 2.5 kg. Thereafter, 2 ml blood from the right ear vein (experimental) of the rabbits was collected at 10 min and 30 min after the injection, respectively. Similar amount of blood was drawn from the left ear vein as a control before the injection. Blood specimens were marked as 0, 10, and 30 that corresponded to 0 min, 10 min, and 30 min samples, respectively. Two milliliters urine was obtained from bladder.

Five microliters specimen (about 30-50 μg protein) was used for SDS-PAGE on a 12% gel at 120 V for 80 min. First, the fluorescent signal on the gel was imaged, followed by staining with Coomassie Brilliant Blue R250 for 1 h. After that, the gel was destained overnight. Finally, the gel was photographed by an electrophoretic image analyzer (Bio-RAD Universal HoodII) 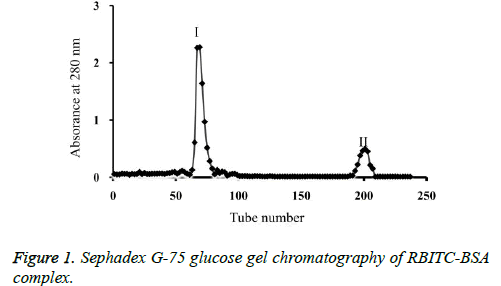 Verification of the light absorption characteristics of RBITC 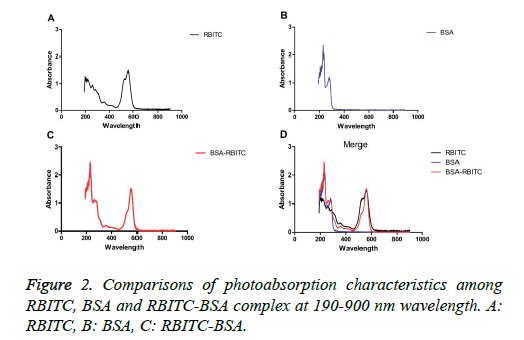 Figure 2: Comparisons of photoabsorption characteristics among RBITC, BSA and RBITC-BSA complex at 190-900 nm wavelength. A: RBITC, B: BSA, C: RBITC-BSA.

Calculation of the marked rate

The F/P value of fractions 60-80 (first eluting peak) of the Sephadex G-75 gel chromatography was 1.80. The F/P value reflects the amount of protein marked by fluorescein. Generally, the value of F/P ranges from 1 to 2. A high value indicates non-specific marking, whereas low value indicates weak fluorescence and low sensitivity.

SDS-PAGE analysis of the serum obtained from rabbits injected with the RBITC-BSA complex showed fluorescent signal in the 10 min and 30 min post-injection samples; the position of fluorescent band was identical to the position of the chromatographically purified RBITC-BSA (Figure 3B). This result suggested that the RBITC-BSA complex was stable before and after the in vivo experiment. Coomassie Brilliant Blue R250 staining showed that the purified RBITC-BSA complex and the fluorescent bands observed in the 10 min and 30 min post-injection serum samples electrophoresed at 66.43 kDa, which is the size of BSA. This indicated that BSA was also stable in the serum; however, the protein was not observed in the urine samples under identical conditions (Figure 3A). 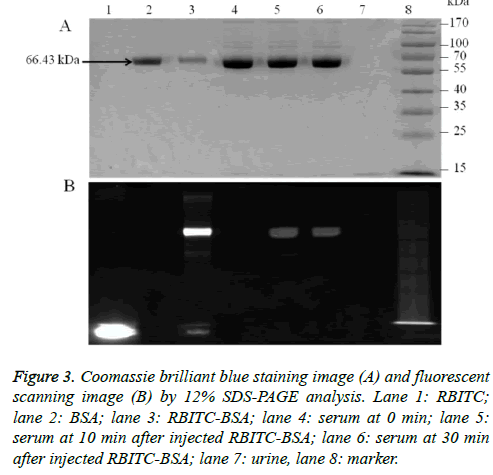 Fluorescent isothiocyanate is a probe with superior fluorescence characteristics. The isothiocyano group of fluorescent isothiocyanate can directly conjugate with the amino group of proteins to form sulfur-hydrocarbon bonds via a phosphoryl reaction to yield a fluorescently labelled protein probe. The isothiocyano group of RBITC can bind to the amino group of proteins (mainly ε-NH of lysine) under alkaline conditions, and yield a fluorescent protein probe via the formation of a carbon-sulfur-amino bond, which involves acylation of carbon [18]. Although the tertiary structure of proteins changed at pH 9.0 during the formation of the RBITCBSA complex, the complex still retained its secondary helical structure [19]. Andersson et al. [20] found three binding sites for fluorescein in BSA, which utilize both stable covalent and unstable non- covalent bonds. BSA could combine with RBITC via stable covalent bonds after the scrambling of its three-dimensional structure in the alkaline pH of the reaction. The non-covalent bonding between RBITC and BSA was disrupted by chloride ions of the buffer solution used in glucose gel chromatography. Full wavelength scanning indicated that the first peak obtained from the Sephadex column contained the BSA-RBITC complex, which was formed via covalent bonding. This complex was injected into rabbits; SDS-PAGE analysis of the post-injection serum samples revealed the presence of fluorescently labelled proteins, which were of the same size as that of BSA. This indicated that the RBITC-BSA complex was stabile in vivo and could be used as a tracer in studies regarding capillary permeability and molecule transfer.

We successfully prepared a RBITC-BSA complex, which is highly specific, sensitive, and stable in vitro, and could be used as a tracer molecule for study of protein transportation and vascular permeability.

Project supported by the National Natural Science Foundation of China (Grant No.81160114) and the Special foundation of Yun Nan province (Grant NO.2011FB196).

All of the authors declare that they have no conflicts of interest regarding this paper.