Colorectal cancer is one of the most common human ma-lignancies, and has been well documented [1]. Carcinoma of the colon and rectum accounts for more than 150,000 deaths annually worldwide. It is considered the second most frequent cause of death in most of the Western Countries after lung cancer in men and breast and lung cancer in women [2]. Microsatellite instability (MSI) is one form of genomic instability that occurs in 10% to 20% of sporadic colon tumors and almost all of the he-reditary non-polyposis colon cancers [3]. However, little is known about how environmental factors (e.g., diet) may influence MSI in sporadic colon cancer. Colon cancer is common in women and rectal cancer is common in men [4,5] Furthermore, some study showed that colorec-tal cancer is the leading type of cancer in Western coun-tries. Over the last decades, the trend of colorectal cancer has been generally more favorable for women than men [6]. New studies in molecular biology and genetics of colorectal cancer have provided clues to its etiology, and clues for the identification of the high risk populations who are most likely to benefit from preventive measures [5].

Amino acids are the building blocks of proteins. They are vital to the construct and integrity of every cell in the body: without them the cells would first fail to hold their morphology, and then fail to perform their unique metabolic functions [7]. Arginine is an essential amino acid for tumour cells. It is helpful to improve the life quality if we take patients’ nutrition into account according to the characteristic amino acid metabolism before treating the cancer patients. Hence, it is important to find the amino acid profile in cancer patients.

However, since colorectal cancer is highly influenced by environmental changes including life style factors [3,4,8-11], it is obvious that in the coming years; colorectal cancer will be one of the major types of cancer to be tackled in the Emirates. The aim of this study is to determine the amino acid profile among the colorectal cancer patients.

This study is based on the data of 108 colorectal cancer patients who were referred to Tawam, Al-Ain, and Al-Saif Hospitals in the United Arab Emirates and underwent surgeries for colorectal carcinoma during the period from 1998 to 2003. There were 74 males and 34 females with a male/female ratio of 2.2:1. Their ages ranged from 18 to 65 years with a mean and a standard deviation of 47.2 ± 9.7 (median age 47 years).

The clinicopathologic and histological data

We have used monoclonal antibody (MAb) against p53 protein, Pab1801 (Oncogene Science Inc., Manhasset, NY), we performed the avidin-biotin complex immunoperixidase method to detect bound p53 Mab [8-12]. After deparaffinization and elimination of endogenous peroxid-ase activity, p53 MAb was incubated overnight at room temperature. After being washed in phoshate-buffed sa-line solution, sections were incubated with biotinylated horse antimouse immunoglobulin G antibody and seubse quentlywith avidin-biotin-linked peroxidase. The substrate used for detection of p53 MAb binding was 0.05% 3,3’ -diaminobenzidine with 0.01% hydrogen peroxide. Sections were scored as positive if a distinct nuclear immuno-recation for p53 was found in the identifiable tumor cells.

A standard amount of 0.8 ml of venous blood was collected in a lithium heparinised bottle and was centrifuged immediately for five minutes at 2000 rpm [13]. From this sample, 2000μl of plasma was deproteinised by adding 20μl of 50% sulphosalicylic acid and was then centrifu-ged at 10,000 rpm for 10 minutes at 4°C. The supernatant was stored at -70°C until analysis at which time it was diluted at 1:1 with a Li-s Beckman buffer along with the international standard. An analysis with the Ion Exchange Chromatography was carried out for individual free amino acids according to Spackman et al [14,15] using a Beckman 6300 automatic amino acid analyzer by the Beckman method. A three Li-buffer system was used in a 10cm high (and 0.4 cm diameter) cation-exchange resin column at a pressure of around 1200 psi and at 20ml/h buffer flow. The method is based on the post column derivatisation by ninhydrin colouring reagent at 135°C. The derivatised amino acids were detected at 570 nm, while proline and hydroxyprooline at 440nm.

The test was performed according to the manufacturer’s instructions. IgG antibodies against a low molecular weight fraction of H. pylori antigens were measured in duplicate with a validated in house indirect enzyme-lin-ked immunosorbent assay [ELISA]. The result was considered positive if IgG and IgA anti-H. pylori anti-body titers were > 300 and > 250 respectively. The sensi-tivity values for IgG and IgA H .pylori serology tests were 74% and 51% respectively (p<0.001).

During the last 6 years, a total of 108 patients with colo-rectal cancer were diagnosed in the United Arab Emirates. 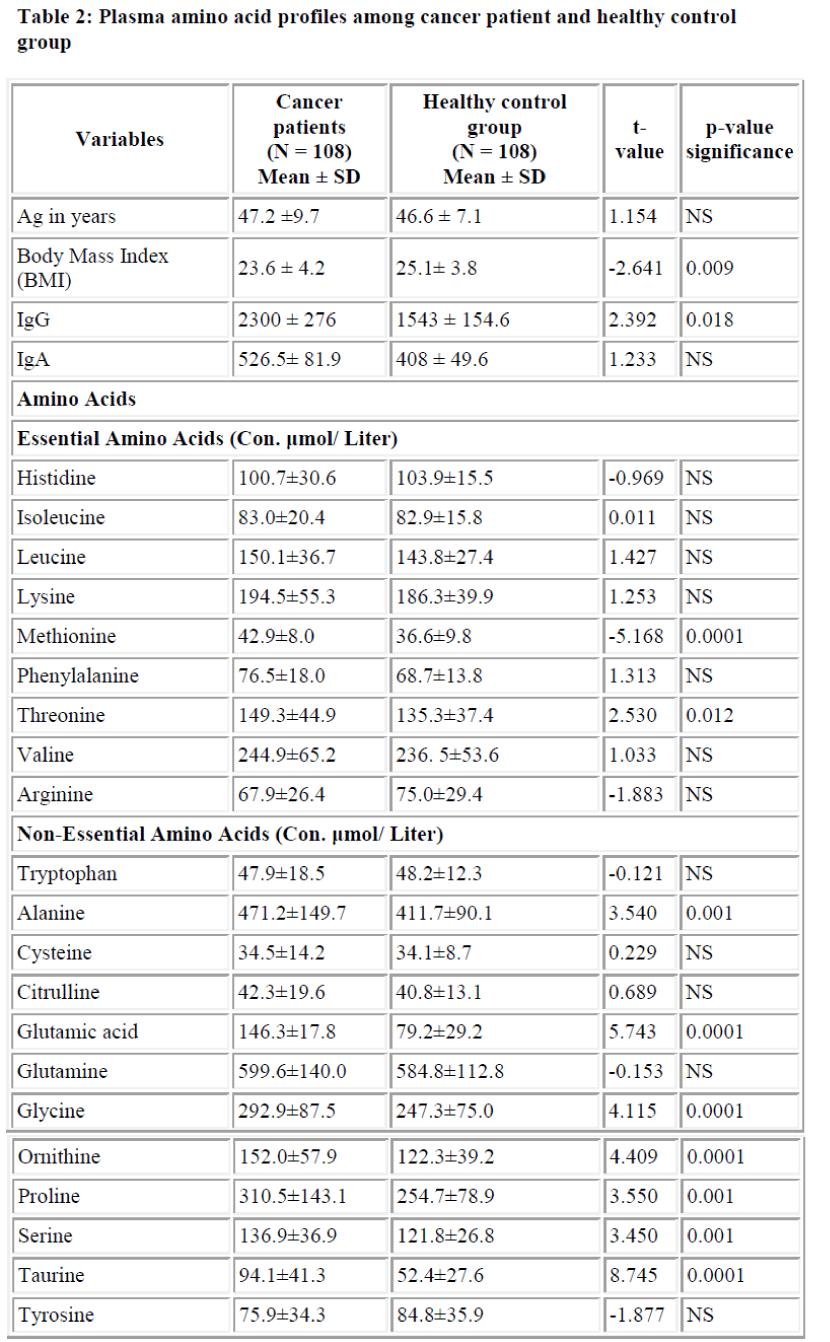 The age standardized incidence rate for colorectal cancer in United Arab Emirates was 3.1/ 100,000 person per year. There must be an important protective factors, pos-sibly dietary, that can contribute to lowering this risk.

Therefore, this would be an important area of research for future studies. Some epidemiological studies demonstrated the importance of genetic and environmental fac-tors which play an important role in the pathogenesis of carcinoma of the colon and rectum [4,11,12]. Worldwide, the incidence of colorectal cancer varies widely, it varies from 1.7 cases per 100,000 person per year in some Western African countries to 51.7 cases per 100,000 per-son per year in North America [1]. The incidence rate of colorectal cancer in the Arabian and the Gulf Countries showed 3.8/100,000 in Jordan [17], 7.5/100,000 in Qatar [18], and 4.5/100,000 in Saudi Arabia [11-20]. These rates are in agreement with our results.

Our results showed that younger patients have an earlier recurrence and have poorer survival when compared to older patients. These data are in agreement with several studies [5,13,14]. The age of highest incidence was above 40 years, which is similar to the findings of other reports of Saudi Arabia [10]. United Arab Emirates [6], Jordan [17], Qatar [18], UK [1], USA [1], Pakistan [19], and Af-rica [1].

Recently, some studies showed that colorectal cancer is the leading cancer in Western countries. During the last decade, its trends have been generally more favorable for women than men [5] and our results are not in consistent with these Western results. However in European countries, its trends took a different pattern during the last decades which was more favorable for men than women [10]. The profile varies greatly in different populations, and the evidence suggests that this variation is mainly a conse-quence of different lifestyle and environmental factors, which should be amendable to preventive interventions [1].

Most of the researchers have found that there is a direct correlation between the fat intake in the diet and the incidence of colon cancer [12]. The low incidence of colorectal carcinoma in most developing countries have been attributed to the fiber-rich diet consumed in these countries [11]. It has been suggested that fiber-rich diet gives protection against colonic carcinogenesis [3].

In general, the incidence rate of colorectal carcinoma in United Arab Emirates is similar to that reported from other neighboring Arabian and Gulf Countries like Jordan [17], Saudi Arabia [11,20], and Qatar [18]. The main reasons of low incidence of colorectal cancer in these coun-tries could be due to the dietary factors which is intake of fruits and vegetables. However, colorectal cancer in these countries tends to affect the middle aged group in a higher percentage than other parts of the world.

In conclusion, the results revealed that the plasma amino acid concentrations were higher among colorectal cancer patients than among the control subjects. There was statistically a significant relationship between patients and controls in respect of IgG. A comprehensive cancer health education and screening program should be well planned and should be implemented for an early detection and prevention of this disease. We hope that future prospective studies will help us to identify the genetics and the environmental factors associated with the changing epidemiological pattern of colorectal cancer in the United Arab Emirates.

We would like to thank Dr. Taleb M. Al-Mansoor for the blood samples and data collection. We are grateful to Ms. Fatima R. M. Al-Neamy for the amino acid analysis and Mr. Asad Usmani for the H. Pylori Serology analysis.