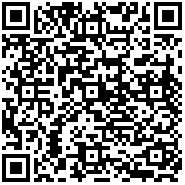 Prolactin is a hormone of the anterior pituitary gland which induces lactation in response to the suckling stimulus of young ones.

Synthesis and secretion of prolactin is not restricted to the anterior pituitary gland, but other organs and tissues in the body have this capability. Prolactin has been found to be secreted by the immune system, the central nervous system, the uterus and the mammary gland itself [1]. Biochemically, prolactin is found in different sizes and in different post- translational forms such as phosphorylated or glycosylated forms. The versatile roles and sources of prolactin had led Bern and Nicoll [2] to suggest renaming it “versatilin and omnipoitin”. Apart from reproduction it has been shown to control a variety of behaviors and even play a role in homeostasis.

The role of prolactin in the immune response was demonstrated for the first time in 1972. It proved that exogenous prolactin enhanced thymic function in prolactin-deficient dwarf mice [3].

Shortly thereafter, Nagy and Berczi [4] found that hypophysectomy or suppression of prolactin secretion with bromocryptine led to decrease of humoral or cell-mediated immunity which was reversed by treatment with prolactin.

We have therefore carried out the following study to estimate serum prolactin levels in patients of rheumatoid arthritis and compare them with the normal healthy controls.

We included 20 female patients with rheumatoid arthritis attending Govt. Medical Hospital and 20 age-matched healthy female controls with age group between 45 to 60 years. All participants voluntarily participated in the study with informed consent approved by the ethical committee of the institution. All the cases were screened for rheumatoid factor, C-reactive proteins, ESR, X-ray of the joint involved. The patients fulfilled the revised ACR (American college of Rheumatology) criteria for rheumatoid arthritis [9].

In patients with rheumatoid arthritis, disease activity was assessed using a disease activity score (DAS) which included the erythrocyte sedimentation rate (ESR) and the number of swollen joints, tender joints and general health. Using this data, the DAS can be calculated using the following formula: DAS (DAS = 0.56٭ sqrt (tender) + 0.28٭ sqrt (swollen) + 0.70٭ ln (ESR) + 0.014٭ GH). The DAS provides a number on a scale from 0 to 10 indicating the current activity of the rheumatoid arthritis of the patient. Cases with DAS above 3.2 were included in the study [10,11]. Patients treated with a Disease Modifying Anti- Rheumatic Drugs (DMARD) or with oral, intramuscular, intra-articular glucocorticoids, or oral contraceptives and NSAIDs at least two week before the study were excluded from the study. Also pregnant and postpartum patients were excluded from the study.

Serum prolactin concentrations were measured under basal conditions and all blood samples were collected in dry tubes. Blood samples were centrifuged at 3000 rpm for 5 minutes and serum was stored in deep freeze at -20 °C until analysis. Serum prolactin concentrations were measured by Sandwich Enzyme immuno-assay system (ELISA) by the standard kit provided by ERBA LISA in which a monoclonal antibody to prolactin is immobilized on the micro-wells. A purified polyclonal prolactin antiserum conjugated with the enzyme Horseraddish peroxidase is used to detect prolactin.

The mean (x) and standard deviation (SD), Standard error of mean (SEM) were calculated. The p-value was calculated using student’s t-test. (which considered significant when p< 0.01 and highly significant at p<0.001) 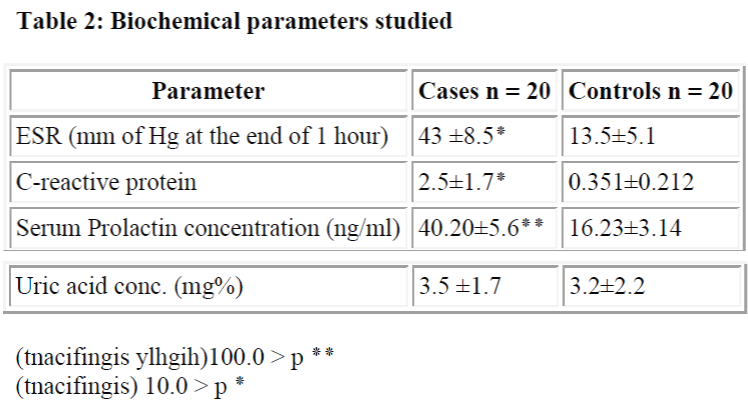 Fuxe K, Hökfelt T, Eneroth P, Gustafsson JA, and Skett.P.[12] first reported the prolactin immuno-reactivity in hypothalamic axon terminals. Prolactin immuno-Prolactin in arthritis reactivity was subsequently found in the telencephalon, hippocampus, amygdala, septum [13], caudate putamen [14,15], brain stem [13,15], cerebellum [1], spinal cord [1,15], choroid plexus and the circumventricular organs [1]. “Lymphocytes can be a source of prolactin as well” [16]. This fact was accepted based on various feasible studies [1,16]. Prolactin mRNA was found in immune-competent cells from thymus and spleen as well as peripheral lymphocytes [1]. This mRNA releases a bioactive prolactin that is similar to pituitary prolactin [1,17,18,19]. Not only is an immunoreactive 22-kDa prolactin found in murine and human immune-competent cells, but size variants of prolactin have been described as well [20,21]. The control of pituitary prolactin secretion differs from that of lymphocytic origin. There is evidence that lymphocytes contain dopamine receptors that may be involved in the regulation of lymphocytic prolactin production and release [22]. There are studies of pharmacological characterization of lymphocytic dopamine receptors. that rather than the classical D2 type receptors found on lactotrophs, both the D4 and D5 predominate on lymphocytes. Moreover, mRNA for the D1, D3, and D5 receptors has been identified in rat lymphocytes [1,23,24].

The question remains of the role for pituitary and lymphocytic prolactin in the immune response. In mice, acute skin allograft rejection was studied in which pituitary prolactin gene expression, bioassayable serum prolactin, immunoassayable serum prolactin and lymphocyte number were found to be elevated elevated Administration of bromocryptine, a D2 receptor agonist, or anti-lymphocytic serum diminishes circulating levels of prolactin in grafted animals and prolongs graft survival [26,27].

Because bromocryptine has little direct effect on lymphocytic prolactin secretion [26]. Such data suggested that pituitary prolactin may modulate the elaboration of lymphocytic prolactin and that suppression of pituitary prolactin is thus a requirement for graft survival [28]. Indeed, such a role for prolactin in transplant rejection warranted further investigation. The data indicate that suppression of prolactin levels decreased the graft rejection reaction i.e. immunity which in turn indicates the role of prolactin in increasing autoimmune response. Deficiency of circulating estrogens is implicated in rheumatoid arthritis [29] with the evidence for the reversal of symptoms with gonodal steroid therapy especially estrogen in artificially induced arthritis in mice [30]. No such study could be found in humans.

It is interesting to note that giving antiprolactin drugs to the patient of rheumatoid arthritis has improved the disease condition. In a study carried out by N.Erb, et al hormonal assay was done in the patient of rheumatoid arthritis. The patient had active synovitis with tender swollen joints, early morning stiffness and erythrocyte sedimentation rate (ESR) of 50 mm in the first hour. Serum prolactin was found to be increased. Prolactin antagonist cabergolin 500 μgm/day for two months was given to the patient which resulted in decrease in the disease activity within two months. In humans, rheumatoid synovial T- cells produce prolactin. Also prolactin receptors are found on T, B and fibroblast like synovial cells [31]. Addition of prolactin to rheumatoid synovial cells in rats causes increased production of proteolytic enzymes causing cartilage destruction and increased production cytokines which indicates that prolactin injected in joints caused inflammation [31,32,33].