In this present investigation the ethanolic extract of Madhuca longifolia bark (EEMLB) was screened for hepatoprotective activity against D-galactosamine (d-GalN) induced hepatiotoxicity in rats. Wistar rats were divided into five groups (n=6). Hepatotoxicity in rats was achieved by intraperitoneal injection of 400mg/kg of d-GalN for five days. Silymarin (100mg/kg) was given as reference standard. The degree of protection against liver toxicity was determined by measuring the serum biochemical parameters viz. SGPT (serum alkaline phosphatase), SGOT (serum glutamine oxaloacetate transaminase), ALP (alkaline phosphatase), total cholesterol and bilirubin (Total and Direct). The result shows that d-GalN has enhanced the levels of SGPT, SGOT, ALP, total cholesterol and bilirubin. Pretreatment with EEMLB (200mg/kg B. wt. and 400 mg/kg B. wt.) brought back the altered levels of biochemical markers to the near normal levels. Histopathological studies also confirmed the hepatoprotective activity of these extracts when compared with d-GalN treated groups. It can be concluded from the result that the extract of Madhuca longifolia bark possesses hepatoprotective activity against D-GalN induced hepatotoxicity in rats.

Hepatitis induced by D-galactosamine shows many metabolic and morphological aberrations in the livers of experimental animals similar to those observed in human viral hepatitis [1]. GalN hepatitis is induced by a multiple step mechanism [2]. In particular, the peroxidation of endogenous lipids has been shown to be a major factor in the cytotoxic action of GalN [3]. GalN-induced oxidative damage is generally attributed to the formation of the highly reactive hydroxyl radical (OHº), stimulator of lipid peroxidation and source for destruction and damage to the cell membrane [4].

In the absence of reliable modern hepatoprotective drugs, there are a number of traditional medicines recommended for treatment of liver diseases. Many herbs reportedly possess hepatoprotective activity such as Silybum marianum [5], Tridax procumbens [6], Strychnos potatorum [7], Andrographis paniculata [8], Picrorhiza kurroa [9], and Aquilegia vulgaris [10].

Madhuca longifolia belonging to the family Sapotaceae is an indigenous plant found largely in the central and north Indian plains and forests [11]. Commonly known as Mahua, it is used in the treatment of epilepsy, and inflammations. Presence of a genuine sapogenol protobasic acid and prospagenol in the seed kernels of Madhuca longifolia was reported by Yosioka [12]. Analgesic activity of the alcoholic extract was reported [13] while antihperglycemic activity [14] and anti-inflammatory activity [15] of the extract of Madhuca longifolia bark was also studied. The plant possesses remarkable antioxidant and hepatoprotective potential against carbon tetra chloride and dgalactosamine induce hepatic injury [16,17].

This study aimed to conduct a scientific experiment using the ethanolic extract of Madhuca longifolia bark at different doses from previous report to investigate its hepatoprotective activity and possible mechanism in Dgalactosamine induced rat hepatic injury.

Leaf samples of the plant Polyalthia longifolia were collected from Bardoli, Surat, Gujarat, during January 2013 and was authenticated by Dr. Bimal Shah. The leaves of the plant were shade dried at room temperature and were then pulverized. The coarse powder obtained was successively extracted with various organic solvents in the increasing order of their polarity (petroleum ether, chloroform, ethanol & water) in a soxhlet extractor for a period of 24 – 28 hours. The extracts were then concentrated to dryness in a rotavapor under reduced pressure and controlled temperature. The ethanol extract yielded a brown semi-solid (16g).

Both sex Wistar rats (150 – 200g) were selected for the study. They were housed in polypropylene cages in an air-conditioned area at 22°C ± 3°C and 59 to relative humidity with 12-hour light & dark cycle. All the animals had free access to standard diet and clean water ad libitium. The experiments were conducted according to the Institutional Animal Ethics Committee (IAEC) regulations approved by the Committee for the purpose of Control and Supervision of Experiments on Animals (CPCSEA).

On the fifth day of the treatment, animals of all groups except group I received a single dose of d-GalN in distilled water at 400 mg/kg body weight intraperitoneally after two hours of their respective treatment. After 24 hours of d-GalN administration blood was collected retroorbitally under light ether anesthesia. Immediately, after blood withdrawal all groups were sacrificed. Liver samples were also collected for histological and biochemical estimations. The blood samples were allowed to clot for 30 – 40 minutes. Serum was separated by centrifugation at 37°C and was used for estimation of various biochemical parameters like SGOT, SGPT, ALP, total cholesterol, total & direct bilirubin [19-22].

Small pieces of liver fixed in 10% buffered neutral formalin were processed for embedding in paraffin. Sections of 5–6 μm thickness were stained with hematoxylin and eosin and examined for histopathological changes (200×) under a compound microscope [23].

Administration of d-GalN resulted in a significant rise in the levels of SGPT, SGOT, ALP, Total Cholesterol and Bilirubin (Total and Direct) when compared to the vehicle treated group (Group-I). The extract of EEMLB treatments significantly (P<0.001) reversed the levels of elevated biochemical parameters in dose dependent manner (Group IV & V). The results indicated that the effect of test extract on biochemical markers was found to be almost comparable than the reference standard, Silymarin (Group III). The results are shown in (Table-1). 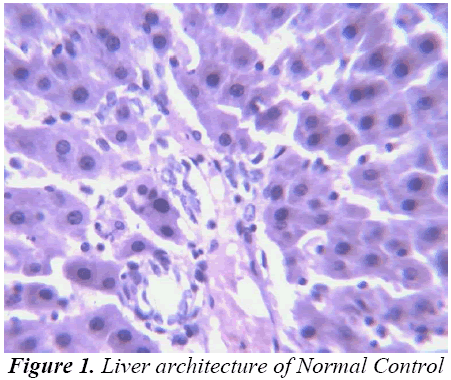 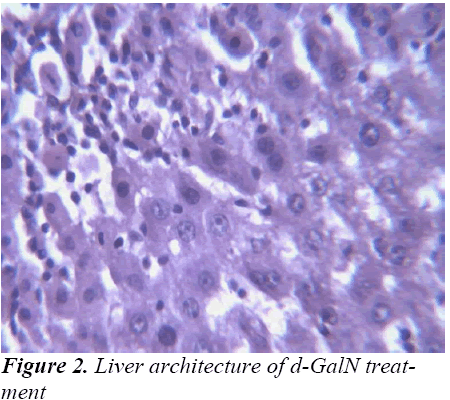 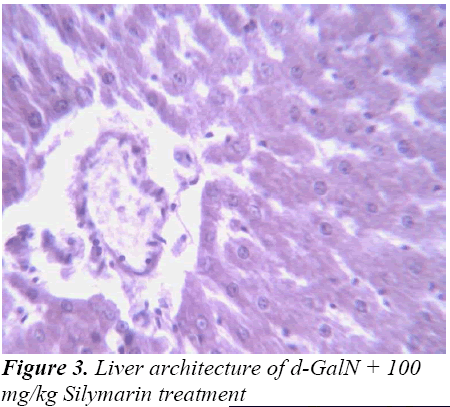 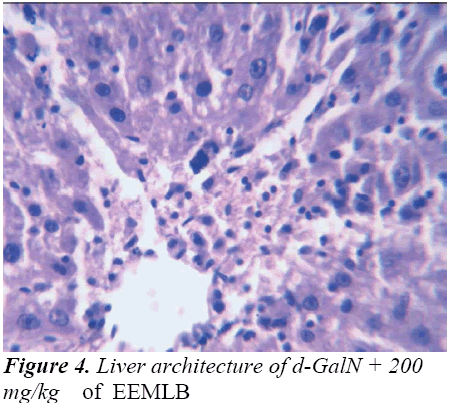 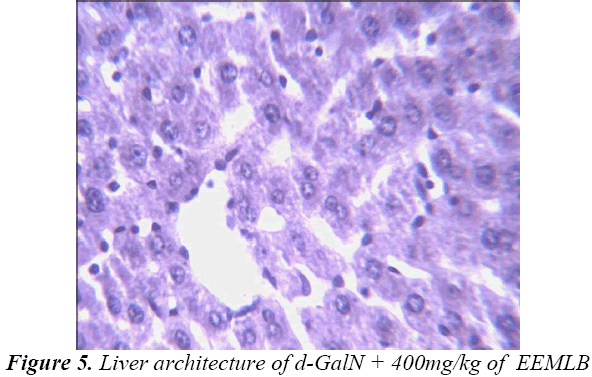 Thus released free radicals react with the membrane polyunsaturated fatty acid (PUFA) and oxidise them to lipid peroxides. This lipid peroxidation damages membrane protein as well as the lipids. Thereby, the integrity of the membrane is lost. Therefore it is considered that the extent of lipid peroxidation is directly proportional to cell damage. In addition, the free radicals may also attack DNA and causes tissue damage. Galactosamine administration in rats disrupts the membrane permeability of the plasma membrane causing leakage of the enzymes from the cell, which leads to elevation in levels of serum enzymes (Mitra et al., 2000). It is apparent that the levels of SGPT, SGOT, ALP, total cholesterol, and total and direct Bilirubin increased significantly in group treated with d- GalN comparing to normal control and it is an obvious indication of hepatic insult [24-26].

Study of any herbal medicine becomes more significant when it ameliorates some diseases conditions. In the present investigation, hepatoprotective effects of the ethanolic extract of Madhuca longifolia bark was studied based on d-GalN induced liver hepatitis. The hepatoprotective effect of Madhuca longifolia has been shown in earlier studies. In our study the rise in SGOT, SGPT, ALP, and bilirubin levels induced by D-galactosamine administration was significantly reduced by EEMLB pre-treatment suggesting that its hepatoprotective activity might be due its effect against cellular leakage and loss of functional integrity of the cell membrane in hepatocytes.

Based on the present study, it can be concluded that ethanolic extract of Madhuca longifolia bark have potent hepatoprotective activity in a dose dependent manner. Further isolation of active principles will be advantageous to produce novel bioactive constituents from these extracts, which may possess more significance in the treatment of liver diseases, and to elucidate its exact mechanism of action. Attempts are being made to isolate and characterize the active principle to which the hepatoprotective activity can be attributed.