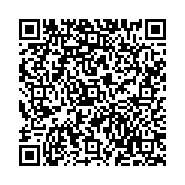 Aims: This study is to investigate the role of GATA-3 and miR-135a in immunosuppression induced by exercise.

Methods: Rats received load exercise to induce immunosuppression. ELISA was used to detect the change of testosterone, cortisol, IFN-γ and IL-4. The spleen index and thymus index was calculated. The qRT-PCR and Western Blot were used to detect the mRNA and protein change of GATA-3 in spleen tissue. The upstream microRNA for GATA-3 was predicted using bioinformatics. The miRNA-135a expression change was detected in spleen tissue using qRT-PCR. The dual luciferase assay was used to identify whether GATA-3 was the target gene for miRNA-135a.

Conclusions: The significantly increased mRNA and protein of GATA-3 may be related to the down regulation of miRNA-135a. GATA-3 and mir-135a may play a role in the progression of exercise-induced immunosuppression.

The fatigue induced by high-intensity exercise may lead to immunosuppression [1]. The exercise induced immunosuppression and increased susceptibility to infectious diseases often result in a decline or stagnation of athlete’s performances [2]. Currently, the most important indicators of exercise induced fatigue are blood testosterone and corticosterone levels [3]. The imbalance of T-lymphocyte differentiation, especially the helper T cells (Th cells), is an important factor in exercise induced immunosuppression [4]. Th1 and Th2 are the two subtypes of Th cells. Excessive exercise leads to increased Th2 and decreased Th1/Th2 ratio [5,6]. GATA binding protein 3 (GTA3) is a Th2-type specific transcription factor that is only expressed in Th2 cells and is essential in the Th2 differentiation [7,8]. Cytokine IL-4 is produced by Th2 cells. GATA-3 is also the main factor to induce the differentiation of Th0 to Th2 cells. GATA-3 has strong antagonizing effect for IFN-γ produced by Th1. It is shown that IL-4 mRNA changed significantly after exercise [9,10]. Therefore, GATA-3 is of great importance in the Th2 regulation.

The miRNA is a class of small non-coding RNA with length of 18-22 nt that is ubiquitous in eukaryotes and can regulate the protein expression at mRNA level [11-13]. In the exercise induced immunosuppression, the expression levels of many miRNAs and proteins are changed [14]. The miR-135a is involved in the regulation of many diseases. For example, serum mir-135a can be used as a supplementary diagnostic biomarker for colorectal cancer [15]. mir-135a can be used as biomarker to detect blood lipids and inflammatory changes [16]. mir-135a can inhibit the calcification of senescent vascular endothelial cell by regulation of KLF4/STAT3 signalling pathway [17]. mir-135a may also influence the epithelial-mesenchymal transition process of lung cancer cells [18]. However, the relationship between miR-135a and GATA-3 is unclear.

In this study, qRT-PCR, Western blot, ELISA and dual luciferase assay were used to detect the cytokines, spleen index, and gene and protein expression in spleen in the exercise induced immunosuppression rat model.

The rats were randomly divided into control group and model group, with 20 rats in each group. The control group was in normal living conditions without load exercise. In model group, all rats had one-week adaptive exercise (speed of 15 m/ min; gradient of 0°C; time of 10 min/d) before formal training.

After 9 weeks training, rats were anesthetized by the 1% sodium pentobarbital (1 ml/100 g). The 5 ml of abdominal aortic blood was collected. Then serum was isolated and stored at -80°C. The spleen and thymus tissues were collected and kept at -80°C.

The serum levels of testosterone, cortisol, IFN-γ and IL-4 were detected with ELISA kits, respectively, according to the instructions provided by the kits. Briefly, 50 μl standard samples of different concentrations were added to each standard well. The 10 μl serum along with 40 μl sample dilution solution was added to each test well. Except for the blank control, a 100 μl of Horseradish Peroxidase (HRP) labelled detection antibody was added to each well, and incubated for 1 h. After 5 times washing, a 50 μl substrate A and B were added in each well and were incubated for 15 min at 37°C. The OD value was measured at 450 nm wavelength within 15 min after adding the 50 μl stop solution.

All rats were weighed and sacrificed. Spleens were removed and weighed. The spleen and thymus index were defined as organ weight per 10 g body weight, calculated as thymus weight (mg)/body weight (g) × 103.

Total RNAs were extracted from spleen tissues by Trizol using phenol-chloroform extraction method. The RNA integrity was examined by gel electrophoresis, and RNA purity was assessed by 260/280 ratio by spectrophotometry. RNA was reverse transcribed into cDNA. The primer sequences of GATA-3, GAPDH, miR-135a and U6 for qRT-PCR were shown in Table 2. GAPDH and U6 were used as internal control for GATA-3 and miR-135a, respectively. The PCR procedure for GATA-3 was as follows: pre-denaturation for 10 min at 95°C, followed by 40 cycles of denaturation for 30 s at 95°C, annealing for 20 s at 55°C, and extending for 30 s at 72°C. The reaction conditions for miR-135a were pre-denaturation at 95°C for 5 min and 40 cycles of denaturation at 95°C for 20 s and annealing at 60°C for 30 s. The relative levels of GATA-3 and miR-135a were calculated using 2-ΔΔCt method.

Total protein was extracted by protein lysate and its concentration was measured using BCA protein assay kit. Then, proteins were separated by 10% SDS-polyacrylamide electrophoresis and transferred to PVDF membrane. The membrane was blocked by 5% skim milk for 1 h. After blocking, the primary antibodies of GATA-3 and β-actin were added and incubated overnight at 4°C. Then, the secondary antibody was added and incubated at room temperature for 1 h. The membrane was developed in ECL luminescent liquid and the developed film was scanned in gel imaging system using image lab software. The relative expression level of GATA-3 was calculated based on the grey value of β-actin.

The bioinformatics prediction of the regulatory upstream miRNA for GATA-3

Bioinformatics prediction was used to identify the upstream miRNA for GATA-3. The following gene prediction software’s were used for bioinformatics prediction: miRanda (http://www.microma.org/rnicroma/home.do), TargetSean (www.targetscan.org), PiTa (http://genie.weizmann.ac.il/pubs/mir07/mir07_data.html), RNAhybrid (http://bibiserv.techfak.uni-bielefeld.de/rnahybrid/) and PICTA (http://pictar.mdc-berlin.de/). The miR-135a was found to be the potential upstream gene of GATA-3.

The wild type and mutant type of miR-135a binding sequence in the 3'-UTR region of GATA-3 gene was constructed by in vitro chemical synthesis. The cleavage sites of Spe-1 and Hind III were respectively added on both ends. The two DNA fragments were cloned into pMIR-REPORT luciferase plasmids. Using liposome method, the plasmids with wild type 3'-UTR and mutant type 3'-UTR sequences were transfected into 293 T cells, respectively. Then, agomiR-135a (100 nM) was transfected and incubated for 24 h. The fluorescence values were measured using GloMax 20/20 luminometer. The Renilla fluorescent activity was used as internal control, and all procedures were strictly in accordance with the dual luciferase assay kit instructions.

Effect of exercise on the immune organ index

To determine the effect of exercise on the immune organ index, spleen and thymus index were assessed. Thymus and spleen are two important immune organs that can represent the overall immune activity. Results showed that excessive exercise reduced spleen index (Figure 2A). Thymus index was also reduced (Figure 2B). This data indicates the immunosuppression of exercise in rat model.

To detect the GATA-3 mRNA and protein expression level after exercise, qRT-PCR and Western Blot was performed, respectively.

As shown in Figure 3, mRNA (Figure 3A) and protein (Figure 3B) of GATA-3 in spleen samples of model group significantly increased compared with that of control group (p<0.05).

The above results suggest that GATA-3 expression level is increased after exercise.

To detect the changes of miRNA-135a expression after exercise, qRT-PCR was conducted. The mRNA-135a expression level in spleen samples of model group significantly decreased compared with that of control group (p<0.05) (Figure 4). 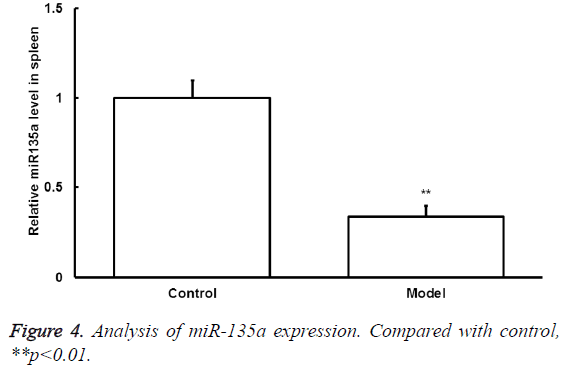 To find the upstream regulatory miRNA of GATA-3, bioinformatics prediction was performed. The miR-135a was found to be the potential upstream gene of GATA-3. The wild type and mutant type of binding sequence were shown in Figure 5A.

To determine whether miR-135 could directly target GATA-3, dual luciferase assay was performed. It showed that the fluorescence values significantly decreased after the cotransfection of agomiR-135a and pmiR-report (P<0.05) (Figure 5B).

While there were no statistically significant differences in fluorescence values compared with the mutant group (P>0.05). It indicates that miR-135a can directly bind with GATA-3 at the 3'-UTR region to regulate its expression. Together, these results indicate that miRNA-135a may play a regulatory role in the pathological process of exercise-induced immunosuppression through GATA-3.

In this study, we investigated the changes of serum cytokines, the spleen index, the thymus index, GATA-3 expression and miRNA-135a expression after load exercise. The potential mechanism was discussed.

Th1 and Th2 are the two subtypes of helper T cells. Th1 cells secrete IL-2 and IFN-γ while Th2 cells secrete IL-4 and IL-5. Th1/Th2 is in a balance in human body [21]. Th1/Th2 balance can be used to evaluate the dynamic changes of cellular immunity and humoral immunity during exercise, and the impact of exercise on Th1/Th2 immune imbalance has been reported [22-25]. Th1/Th2 imbalance can be reflected by serum cytokines. Th1 specifically produces IFN-γ but not IL-4; while on the other hand, Th2 specifically produces IL-4 but not IFN-γ. Therefore, IFN-γ and IL-4 are often used to evaluate the Th1/Th2 balance [26]. In our study, testosterone decreased and cortisol increased after exercise, indicating that there is the excessive exercise induced fatigue. The spleen and thymus index both decreased after exercise, indicating the immunosuppression. The IFN-γ significantly decreased and IL-4 increased, indicating the imbalanced Th1/Th2 and Th2 drift. Therefore, these results suggest that the exercise may induce immunosuppression through imbalanced Th1/Th2.

The transcription factor of IL-4 is GATA-3, which promotes IL-4 gene transcription, inhibits IFN-γ expression, regulates Th2 cell differentiation and cytokine expressions, as well as promotes Th1 transfer to Th2 [27]. The expression level of GATA-3 is low in naive CD4+ T cells [28]. However, the expression level of GATA-3 increases when naive T cells differentiate into Th2 and decreases when naive T cells differentiate into Th1 [29]. GATA-3 cannot be detected in mature Th1 cells, therefore, GATA-3 is specifically expressed in Th2 cells [29]. It is generally believed that GATA directly activate IL-4 gene through two GATA-3 binding sites [30]. In our study, it indicates that mRNA and protein level of GATA-3 significantly increased in rat model group compared with that of control group, which may lead to IL-4 protein up-regulation. This also suggests that the Th1/Th2 imbalance drifts toward Th2 increase.

In addition, microRNA, the upstream regulator of GATA-3, was investigated. The microRNA is a class of endogenous, small, non-coding RNA miRNA [31,32]. The miRNAs are vital regulatory factors in the disease development, physiology and pathogenesis [33,34]. The upstream regulatory gene for GATA-3 was predicted by bioinformatics and miR-135a was found to be one of the potential upstream genes that might regulate GATA-3 expression. The dual luciferase assay further confirmed that miR-135a could directly bind with the 3’UTR region of GATA-3, suggesting that miR-135a could directly regulate GATA-3 expression.

This work was supported by grants from the Natural Scientific Foundation of Shandong Province, China (ZR2014CM046, ZR2010CQ031 and ZR2015CL019) and Collaborative Innovation Center of Chinese medicine antivirus in Shandong University of Traditional Chinese Medicine (XTCX2014B01-07).

The authors declare no conflict of interests.