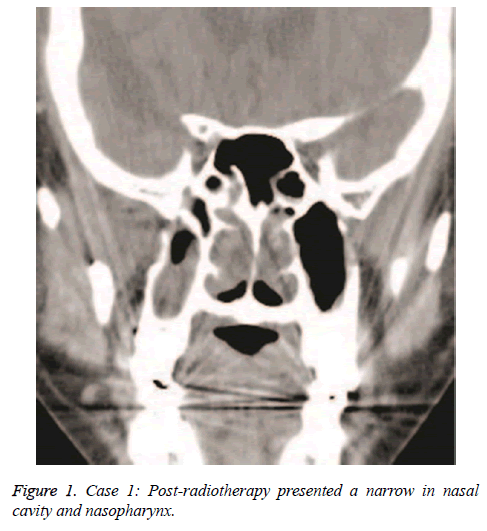 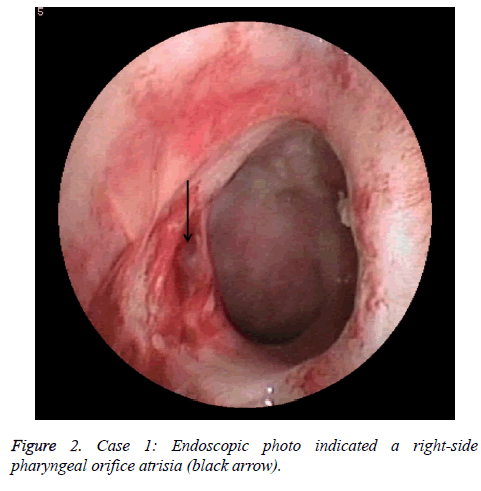 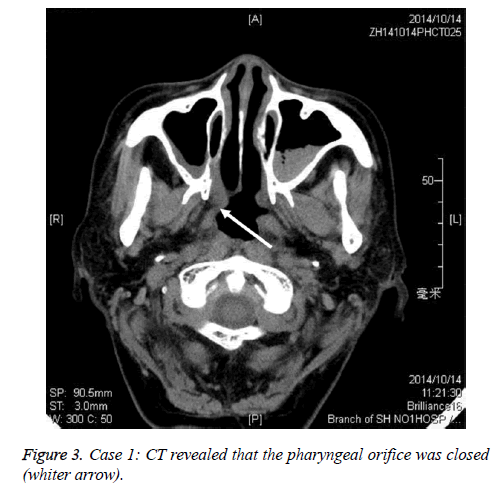 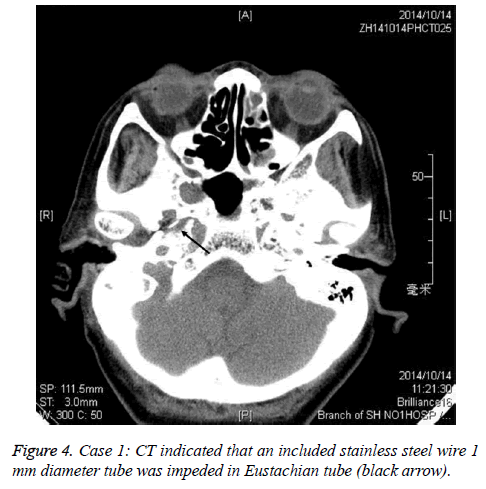 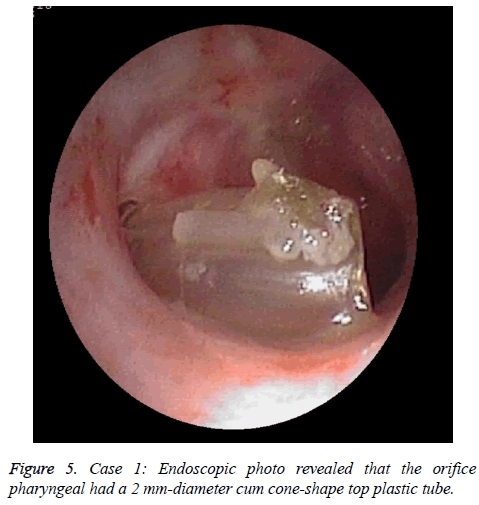 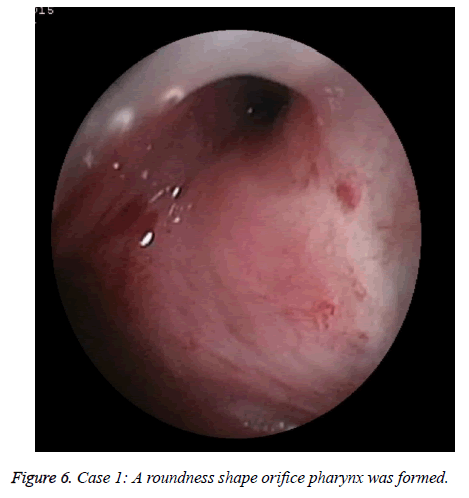 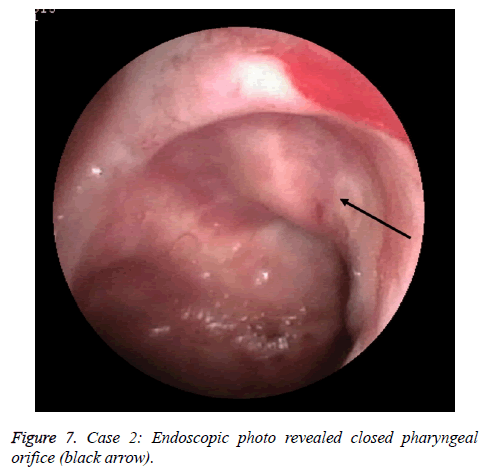 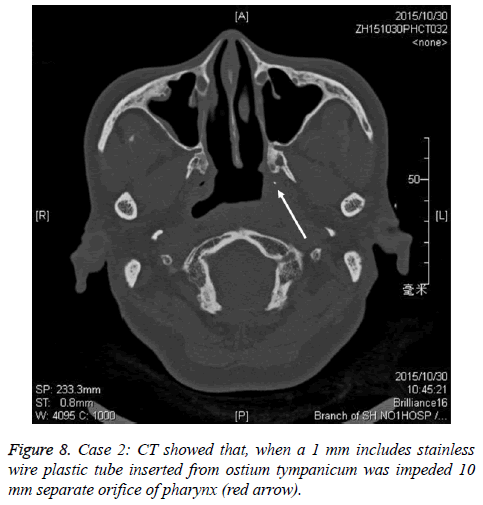 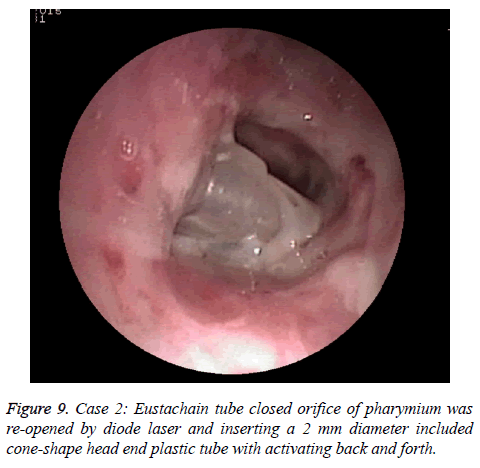 Figure 9: Case 2: Eustachain tube closed orifice of pharymium was re-opened by diode laser and inserting a 2 mm diameter included cone-shape head end plastic tube with activating back and forth. 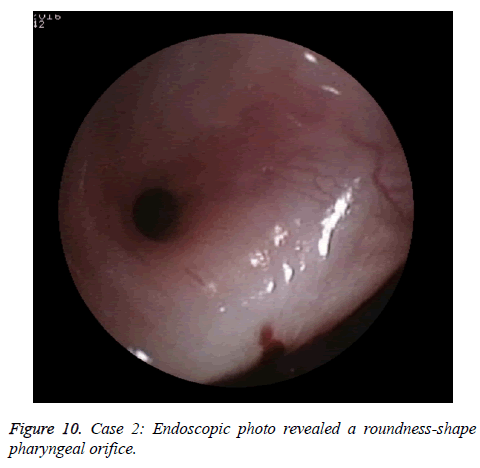 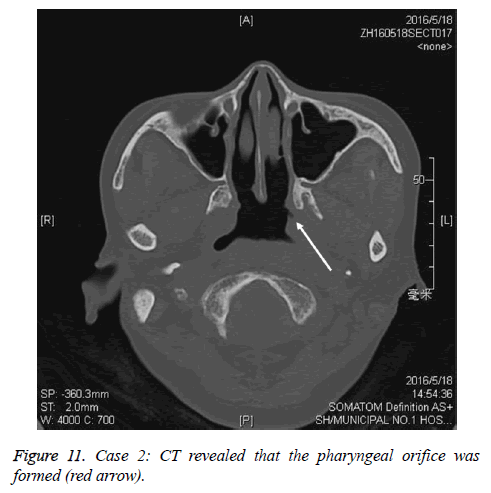 The orifice pharynx atrisia after radiotherapy for nasopharyngeal cancer is a common condition. However, it has not treatment experience for past very long time because of lacking valid methods.

This study may be first report for re-opening of pharyngeal orifice atrisia after radiotherapy in whole world as we are aware.

We had reported a case of pharyngeal orifice seal off since 8 y before [4]. In that case, the orifice pharynx atrisia was after operation of nasal endoscopy.

The closed orifice was re-opened by a diode laser, and 1 mm plastic tube and a titanic stent were inserted. The orifice presented a small hole after 6 months.

The secret could discharge from tympani to pharynx when airball compress in ear canal, but Valsava’s air-blowing could not. Apparently, this result was not satisfactory.

Now we used a cum cone-shape top plastic tube pulling and pushing repeatedly for dilating the pharyngeal orifice. It made the mucous member and submucous together, and overturn into tube. The orifice was formed with a roundness hole and had not narrowed again. The two cases could perform the Valsava’s air-blowing, which was a gold index for Eustachian tube unblocked. Recently, Kivekas et al. [5] report the histopathology of balloon-dilation Eustachian tube, which can make mucus member inflammatory reaction and swelling altered. Therefore, the dysfunction Eustachian tube was improved. Our cases are based on the same mechanism for gaining re-opened pharyngeal orifice.

In this study, both two cases had no “patulous” or abnormal patency Eustachian tube. Recently, Aper et al. [6] report quantitative description of Eustachian tube movement during swallowing as visualized by transnasal videoendoscopy. This perhaps had some revelation. When Eustachian tube is opened, the torus happen medial rotation and soft palate elevation close the pharynx airway. Similarly, in respiration, the Eustachian tube is closed. As long as ruling Eusthian tube and several muscles coordinate, the tube open or respiration cannot happen at the same time. This physiologic mechanism can ensure no occurrence of “patulous”. Dennis et al. [7] have reported balloon dilation of the cartilaginous Eustachian tube. No “patulous” happens in their cases. Of course, the “patulous” perhaps has more complicated cause, so more studies are needed.