The cut-off criterion of serum levels of glycated hemoglobin (HbA1c) >6.5% as an alternative to fasting blood sugar (FBS) >7.0 mmol/L for diagnosis of diabetes mellitus still requires rigorous studies on diverse populations before its safe implementation. We conducted a regression analysis on 75 diabetic patients (40 males and 35 females) for testing the association between FBS and HbA1c and postulation of regression equations for inter-conversion of their levels. The average ± standard deviation values of FBS and HbA1c were 8.101 ± 3.917 mmol/l and 7.989 ± 2.112 %, respectively. Patients with HbA1c >6.5% had significantly higher levels of FBS. We observed a significant correlation between FBS and HbA1c (R= 0.717, P<0.001). The regression equations, HbA1c = 0.387 (FBS) + 4.855 and FBS = 1.33 (HbA1c) – 2.528, could be utilized for inter-conversions between the levels of FBS and HbA1c for predicting their expected values in diabetic patients. Further studies are warranted to examine the deviations from the regression equations in diabetic patients from different ethnicity and demography.

Fasting plasma sugar (FBS) and glycosylated hemoglobin (HbA1c) are important diagnostic markers for diabetes mellitus. The former biomarker indicates the current status of glycaemia whereas the latter is used for measuring the long-term glycemic control. The American Diabetes Association has recommended HbA1c ≥ 6.5% as a possible substitute to FBS ≥ 7.0 mmol/L for diagnosis of diabetes [1]. HbA1c not only provides a reliable measure of chronic hyperglycemia it also correlates well with the risk of long-term diabetes complications. The measurement of HbA1c levels was found to be advantageous over blood glucose levels in predicting the risk of developing diabetes or cardiovascular disease [2]. However, FBS alone was not sufficient for diagnosing approximately half of the patients with dysglycemia whereas the combined use of FBS and HbA1c was found to be useful for preoperative identification of coronary patients with unknown diabetes [3]. A moderate to severe dyslipidaemia has been reported in diabetic patients with HbA1c >6%–9% and >9%, respectively [4]. The dual biomarker ability of HbA1c for predicting glycemic control as well as lipid profile indicator may be utilized for screening of high-risk diabetic patients for timely intervention with lipid lowering drugs [5]. Recently, Khan et al [6] examined the validity of HbA1c cut-point of 6.5% for diagnosis of diabetes using a series of 12785 male diabetic patients with an observation of 3.78% false negative predictions using the set diagnostic threshold of HbA1c.They suggested that Saudi individuals with HbA1c between 6.0-6.5% may be considered as probable diabetics and their status should be verified by combined FBS and HbA1c criteria [6]. In this study, we conducted a regression analysis to determine the relationship between the FBS and HbA1c levels in diabetic patients with the aim to find the regression equations for inter-conversions between their values.

We recruited 75 diabetic patients (45 males, 30 females) who visited the clinics of Prince Sultan Military Medical City, Riyadh, Saudi Arabia. The protocol of this study was approved by our Institutional Ethics Committee. All the subjects signed informed consent forms before samples collection.

The mean ages of male and female patients were 50.31 y (24-87 y) and 49.80 y (16-83 y), respectively. Venous blood samples were collected in vacutainer tubes from all the subjects after at least 8 h fasting. The plasma and serum samples were analyzed for FBS and HbA1c respectively using an autoanalyser (Roche Modular P- 800, Germany).

The data were analyzed by SPSS statistical package (version 10). We conducted regression analysis and Pearson’s correlation test to examine correlation between FBS and HbA1c. Independent samples Student’s t-test (2- tailed) was used to compare means between the two groups. P values <0.05 were considered as statistically significant.

Table 1: Levels of FBS and HbA1c in diabetic patients. 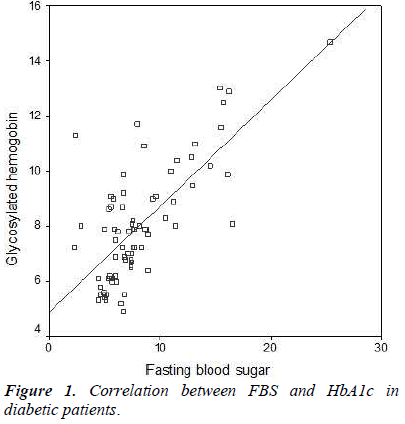 Figure 1: Correlation between FBS and HbA1c in diabetic patients. 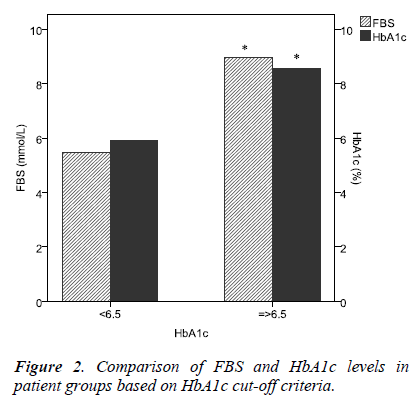 Figure 2: Comparison of FBS and HbA1c levels in patient groups based on HbA1c cut-off criteria.

The results of this study showed that the levels of FBS and HbA1c are not affected by patients’ gender as these parameters did not show any significant difference between male and female diabetic patients (Table1). There was a significant correlation between FBS and HbA1c levels which is in agreement with earlier reports on diabetic patients from the same region [4,5].

Furthermore, using the regression equation generated in this study, the cut-point of HbA1c (6.5%) corresponds to FBS being 6.1 mmol/l, which is less than the diagnostic cut-point of FBS (7.0 mmol/l). Colagiuri et al [11] have demonstrated narrow glycemic threshold ranges for the presence of diabetes-specific retinopathy and suggested that the current diabetes diagnostic level for FBS should be lowered to 6.5 mmol/l while HbA1c of 6.5% is a suitable alternative diagnostic criterion. However, a cutpoint of HbA1c ≥6.5% has been reported to miss several patients with diabetes, including patients with fasting hyperglycemia as well as with impaired glucose tolerance [12]. Whereas the combined use of HbA1c and FBS for the diagnosis of diabetes offers the benefits of each test and reduces the risk of systematic bias inherent in the individual biomarker testing [12].

In conclusion, the diagnostic potential of FBS and HbA1c is enhanced when these markers are used in combination because their respective cut-points somehow compromise with diagnostic sensitivity and selectivity. The regression equations resulted from our data can be used for interconversions between these two markers. Further studies on large sample sizes and different ethnic groups are warranted to test the possible deviations in the regression equations reported in this study.

The authors extend their appreciation to the Deanship of Scientific Research at King Saud University, Riyadh, Saudi Arabia for funding the work through the Research Group Project No. RGP-009.