Bezoars of the gastrointestinal tract are a relatively rare disorder that affects the gastrointestinal system. The currently available treatment methods for a gastric phytobezoar include dissolution of the bezoar by Coca-Cola®, removal by endoscopic devices, laparotomy and laparoscopic surgery. We report here the case of a 52-year-old woman, suffering from upper epigastric pain due to gastric bezoar and pyloric obstruction that required surgery. 3D laparoscopic surgery was performed. Two months after the surgery, she was asymptomatic and recovered. The pathological examination suggested that it was fibrous bezoar. 3D laparoscopy was suggested to be an effective method in treating gastric bezoar.

Bezoars of the gastrointestinal tract are a relatively rare disorder that affects the gastrointestinal system. Bezoars are typically grouped into 4 types according to their composition: phytobezoars, trichobezoars, lactobezoars, or pharmacobezoars [1]. Phytobezoars are composed of indigestible food particles that are found in vegetable or fruit fibers. It is the most common type of bezoars, accounting for approximately 40% of all reported bezoars [1]. Once the diagnosis of bezoar is made, the bezoar is generally dissolved or removed because it can cause gastric outlet obstruction, ileus, ulcerations due to pressure necrosis, and subsequent gastrointestinal bleeding. Therefore, appropriate and prompt diagnosis is important in order to prevent the development of potentially severe complications [2,3]. We report here the case of a 52-year-old woman, suffering from upper epigastric pain due to gastric bezoar and pyloric obstruction that required surgery.

A 52-year-old woman admitted to the hospital with more-thanone- month history of intermittent epigastric pain. Associated symptoms included epigastric swelling pain, nausea and vomiting. The pain was relieved after vomiting. The patient treated it as stomach disorders, which proved to be ineffective. The symptoms got worse nine days prior to admission. The patient went to a local hospital. But she was not cured and then was admitted to our hospital on December 19th 2013. Physical examination showed flat and soft abdomen without varicose veins or muscular tension, tenderness in upper abdomen xiphoid process, no fluid thrill, and no succussion splash or bump. The gastroscopy showed a 4 × 3 × 2 cm fibrous mass in gastric antrum-gastric angle and duodenal bulb, which resulted in pyloric obstruction. Upper gastrointestinal radiography showed several filling defects of different sizes in gastric antrum and duodenal bulb, which can shift with the body position (Figure 1A). The patient was diagnosed as gastric and duodenal bulb bezoar. Stomach CT (Figure 1B) showed a mass of mixed density shadow in gastric antrum-gastric angle and duodenal bulb. The large bezoar incarcerated in duodenal bulb, resulting in pyloric obstruction. 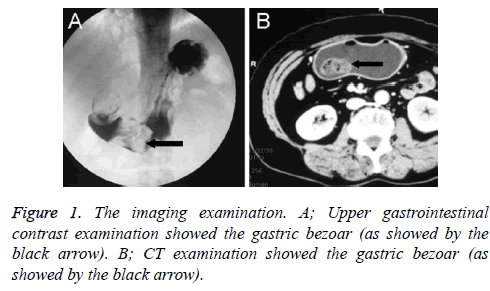 After written informed consent was obtained, 3D laparoscopic surgery was performed. Preoperative examination and preparation were performed. General anesthesia was conducted in a horizontal position. An arc incision was made below the umbilicus and pneumoperitoneum (pressure of 13-15 mm Hg) was established. A trocar of 10 mm was inserted. The laparoscope (30º) was inserted. A trocar of 5 mm was inserted below the costal margin of the left anterior axillary line. A 12 mm trocar was inserted below the middle point of the above two holes. Another 12 mm trocar and 5 mm trocar were inserted on the right side symmetrically. A longitudinal incision was made in stomach antetheca. 3 large bezoars were observed in gastric body and pyloric tube. The bezoars were removed using grasp pliers (Johnson, China) and gallbladder pliers (Figure 2). A drainage tube was inserted to the pylorus and high pressure injection of saline was performed to determine whether there was obstruction or not. The incision of the stomach was closed using Endo-GIA (Tri-Staple, Covidien ltd., USA). Active bleeding was examined and the incisions were closed. The surgery time was 120 min with 50 ml blood lose. Postoperatively, the patient was prohibited from eating and drinking for 3 days. Five days postoperatively, gastric tube was removed and the patient was allowed to have a small amount of liquid diet. Six days postoperatively, the incisions healed well. The peritoneal drainage tube was removed and the patient was discharged in well general condition. Two months after the surgery, she was asymptomatic and recovered. The pathological examination suggested that it was fibrous bezoar. 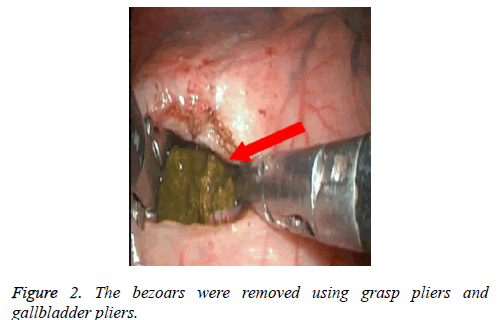 Since gastroscope was used clinically, the gastroscope was gradually used to remove gastric bezoar [1]. However, gastroscope treatment is time consuming [4]. In the present study, the bezoar was large and resulted in pyloric obstruction. The patient presented with serious clinical manifestations. Therefore, to remove gastric bezoar promptly, surgical treatment was suggested. 3D laparoscopic was suggested for the following advantages. It offers more clear view filed which can help precisely positioning the bezoars and reducing the operation difficulty and patient pain [5].

Secondly, the bezoar was large and went across the pylorus ring, which was difficult to be removed one-time. Therefore,grasp pliers and gallbladder grasp pliers were used to decompose the bezoar. The small masses of bezoar were then removed one by one. Thirdly, when removing the bezoar in the deep position, it required good coordination among the surgeons, the first assistant and the assistant who holding the endoscope. Thus, the bezoar was exposed completely. To avoid the view filed being blocked by the tender stomach wall, the “double pneumoperitoneum” was performed. Fourthly, after removal of the bezoar, duodenum was examined to ensure it was unobstructed without residual bezoar. Lastly, the longitudinal incision and transverse closure was conducted to decrease the risk of stenosis.

In the present study, the surgery was successful and the patient recovered well. 3D laparoscopy was suggested to be an effective method in gastric bezoar treatment.