Background: Dimethylnitrosamine (DMN) is a potent member of nitrosamine family, which has toxic and carcinogenic potential. Several beneficial effects of statins have been described in patients with chronic kidney disease and in experimental models. The aim of this study is to investigate the protective effects of Simvastatin (SMN), Nigella Sativa Oil (NSO) and Thymoquinone (TQ) on DMN-induced nephrotoxicity in rats.

Conclusions: SMN prevented the kidney damage via its antioxidant effect whereas NSO had partial effect. But TQ did not have a remarkable protective effect.

While several reasons play role in kidney damage, radiocontrast agents, nephrotoxins (toxic agents and drugs) and ischemia are also blamed. Dimethylnitrosamine (DMN) is a potent member of nitrosamine family [1]. While the liver is the primary target for DMN metabolism, kidney, lung and esophagus are also targets [2]. The damage with DMN in tissues is not only via direct effect of reactive metabolites but also via production of proinflammatory agents such as cytolytic and reactive oxygen species or membrane lipid peroxidants. It has hepatotoxic and carcinogenic potential [1,2].

Nigella sativa (NS), also known as black seed or black cumin, has been used in folk medicine for a long time. NS contains more than 30% of a fixed oil and 0.40-0.45 w/w of a volatile oil. The volatile oil has been shown to contain 18-24% thymoquinone (TQ) and 46% monoterpenes such as p-cymene and a-pinene [3]. In recent clinical and experimental studies it has been reported that NS has immunomodulative, antiinflammatory, antitumour, antidiabetic and antiulcerogenic effects.

In addition, modern toxicological studies have shown that NS and some of its active components (volatile oil and TQ) may play a protective role on the disease or chemical induced nephrotoxicity and hepatotoxicity [4]. Statins are competitive inhibitors of 3-hydroxy-3-methyl- glutaryl-coenzyme A (HMG-CoA) reductase, the key enzyme that regulates synthesis of cholesterol from mevalonic acid by suppressing the conversion of HMG-CoA. Simvastatin is one of the antioxidative drugs, which has anti-inflammatory, antioxidant, antiapoptotic and anabolic effects [5].

In addition, several beneficial effects of statins have been described in experimental models of renal disease, including streptozotocin-induced diabetic nephropathy, puromycininduced nephrosis, and cyclosporin A (CsA)-induced nephropathy and in patients with chronic kidney disease [6-14]. This study aimed to investigate the protective effects of Nigella Sativa Oil (NSO), Thymoquinone (TQ) and Simvastatin (SMN) on DMN-induced oxidative stress in rat kidneys.

This experimental study was performed subsequent to the approval of the Institutional Animal Care and Use Committee of Kahramanmaras Sutcu ımam University, Medical Faculty (05.05.2015/03-04).

In this study, we used 30 male Wistar-Albino rats whose weights ranged from 200-250 grams. These animals were kept at constant temperature (20-220C) and humidity (50-60%) with a diurnal cycle of 12-hour light and 12-hour darkness periods. Animals were obtained from the facilities of the experimental research laboratory of our institution and access to food and water was allowed ad libitum. Procedures were carried out in accordance with the guidelines of the National Institute of Health guide for the care and use of laboratory animals (NIH Publication No. 8023, revised 1978). Maximum effort was spent for minimization of the suffering of animals as well as the reduction of the number of animals used. Before the beginning of the study, rats with unsuitable health conditions were removed from the main population.

Preparation of the gavage solution

Renal toxicity was induced in Wistar-Albino rats using a single intraperitoneal injection of 40 mg/kg DMN obtained from Sigma made up in normal saline.

The animals were divided into the following groups:

Control Group: The rats received standard food and water (no DMN, no NSO, no TQ and no SMN).

After 12 days from beginning of the study animals were sacrificed and kidneys were dissected from all groups at 4°C and quickly frozen in liquid nitrogen. Tissues were homogenized with suitable buffer, centrifuged at 3000 g and the supernatant were used for biochemical estimations on the same day of sacrifice.

Tissue extracts were stored at -70°C until further analysis.

100 mg tissue was rinsed with 1X phosphate buffered solution (PBS) homogenized in 1 mL of 1X PBS and stored overnight at -20 degrees. After two freeze-thaw cycles were performed to break the cell membranes, the homogenates were centrifuged for 5 minutes at 5000xg, 2-8 degrees. The supinate was assayed and removed immediately. Alternatively, aliquots were stored at -80 degrees. 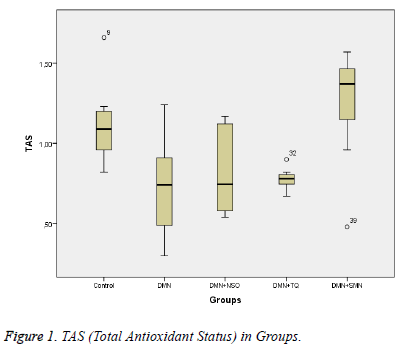 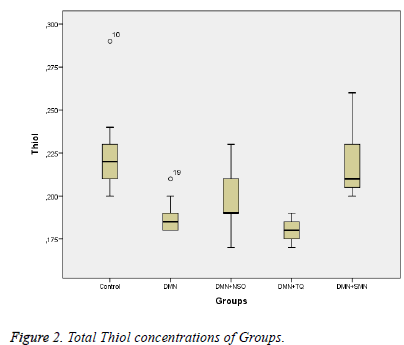 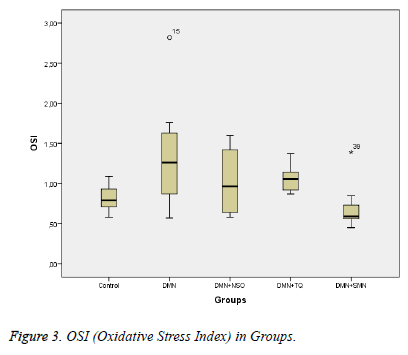 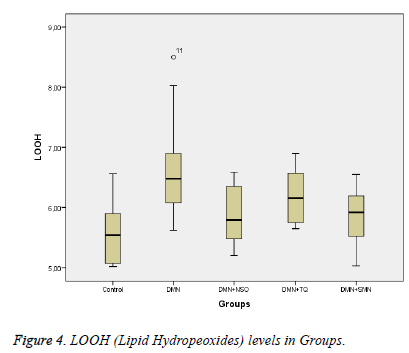 The Total Thiol concentrations were measured by the methods originally described by Ellman and modified by Hu [18,19]. After measurement of total protein concentrations with Lowry method in renal tissues, the resulting unit of TAS was converted to μmol/g protein [20].

Analysis of data was made via IBM Statistical Package for Social Sciences version 20 (SPSS Inc., Chicago, IL, USA) and normality of distribution for the quantitative data was controlled using Kolmogorov-Smirnov test. Parametric tests were applied to data of normal distribution, while nonparametric tests were administered for data devoid of normal distribution. One-way ANOVA test was used for comparison of groups with independent continuous variables and Duncan test was used for comparison tests. Continuous data were expressed as mean ±standard deviation and differences associated with a p value <0.05 was considered as statistically significant.

Data collected in this study was found to have a normal distribution (p values >0,05 for all parameters). Five homogeneous groups were constituted with respect to results of Duncan test (Table 1). Analysis of variance yielded that there was a remarkable difference between groups in terms of TAS, OSI, Total Thiol and LOOH (p values were <0,001; 0,014; <0,001and 0,003 respectively) and was no remarkable difference between groups in terms of TOS (p=0,575) (Table 1 and Figures 1-3).

When DMN Group was compared to other groups;;

Between DMN Group and DMN+NSO Group: LOOH was significantly lower in DMN+NSO group (p=0,046). A remarkable difference was not found in other parameters (p>0.05 for all parameters) (Figure 4).

Between DMN Group and DMN+TQ Group: None of the parameters was found significantly different (p>0.05 for all parameters).

In this study, TAS and Total Thiol were lower and OSI and LOOH were higher in DMN group than in control group. Furthermore, TAS and Total Thiol were lower and OSI was higher in DMN group compared to DMN+SMN Group. To our results, we can say that DMN makes an injury in the kidney tissue and SMN reduces this damage. The balance between the oxidant and antioxidant defenses in the body has important health implications. Aerobic cells have developed their own defense system, the antioxidant system, which includes enzymatic (SOD, GPx) and nonenzymatic components, including albumin, Ceruloplasmin, Total Thiol groups and vitamin E to detoxify the endogenous and exogenous oxidative challenges during aerobic metabolism or when they encounter stress-inducing agents such as LOOH and MDA [21-23].

The components of oxidative and antioxidative system were not evaluated separately in our study. However, there are some studies that these components were evaluated separately. Satish et al. have reported that SOD, CAT and GPx activities were significantly lower in rats with hepatocellular damage was inducted with DMN [1]. It has reported that peroxide radicals are formed and thiol groups react with peroxide radicals in the first step of oxidative reactions and then the level of thiol groups decrease [24]. Boroushaki et al. have reported the lower levels of thiol groups in nephrotoxicity [25]. There was not a significant increase in TOS in the animals administered DMN alone. This can be explained with consumption of antioxidants to prevent an increase in TOS as well as in LOOH, which is a component of TOS. The decrease in the TAS and Total Thiol concentrations supports the results. In addition, OSI, which is calculated with TAS/TOS ratio was significantly increased. Like TAS, TOS includes many components such as hydroxyl (OH), hydrogen peroxide (H2O2), singlet oxygen (O2 ↑↓), lipid hydroperoxide (LOOH), and superoxide (O2- ) [15-18].

In the study of Sathish et al., it was reported that DMN raised the levels of LOOH. Beside TAS levels, TOS levels may increase with higher doses of DMN administration than our study. Koc et al. investigated the effects of statins on the rats in which the noise-induced oxidative stress and reported that the statins increased the activities of antioxidant enzymes (SOD and GPx) and decreased the levels of oxidative stress parameters but it was not significant. However, they pointed out that this result could be related to the statin dose and a significant decrease could occur with higher statin doses [26]. In a study that investigated the effects of simvastatin on the lipid peroxidation and antioxidant parameters in patients with peripheral arterial disease, it was reported that statins show synergistic action with antioxidants to decrease the oxidative stress by increasing antioxidant levels and decreasing LOOH and MDA levels significantly [24].

There are several studies about the protective effects of statins on nephrotoxicity. Maheshwari et al. reported that simvastatin has protective effect on the cisplatin-induced nephrotoxicity. They supported these results by the recovery of the decayed renal function tests and lipid peroxidation and the recovery of decreased antioxidant SOD and CAT activities related to toxicity, and by histopathological findings [9]. In a metaanalysis study, it was reported that high-dose statin decreased the incidence of contrast-induced acute kidney injury [27]. Similar results were reported in another study in which the protective effect of statins was found to have a relation with anti-inflammatory and anti-apoptotic properties [17]. In their study, Santos et al. have confirmed the renoprotection with antioxidant principle of the simvastatin in acute kidney injury induced by sepsis in an experimental model [28,29].

In our study, renal function tests and hystopathological findings were not evaluated. Therefore, severity of the nephrotoxicity was not determined. However, decreasing of TAS levels and increasing of OSI levels in DMN group, and increasing of TAS and decreasing of OSI levels with injection of SMN support the protective effect of SMN on renal damage. Our results are in correlation with Maheshwari et al. findings [9]. To our results, administration of DMN with NSO only prevented from an increase in LOOH, but did not prevent from the decrease of TAS and Thiol concentrations and the increase of TOS and OSI. Many studies showed that phenolic compounds have antioxidant and free radical scavenging properties. Nigella sativa is a plant that includes phenolic compounds as well [1]. It includes fixed oil and volatile oil. Nigella sativa oil has a complex structure that is composed of fatty acids, vitamins, pigments, and volatile components. Also Nigella sativa includes major active constituents such as thymoquinone, thymol and dithymoquinone that has antioxidant effects and free oxygen scavenging properties [30]. In the study of Abdel Daim et al. in which the effects of NSO on the oxytetracycline (from the group of tetracycline) induced hepatonephrotoxicity in rabbits was investigated, they reported an increase in the antioxidant enzymes such as GSH, SOD and CAT, and a decrease in lipid peroxidation markers such as lipid hydroperoxide and MDA. Furthermore, these results were explained by the antioxidant effects of NOS by inhibition of lipid peroxidation or by scavenging of free oxygen radicals or by increasing SOD and CAT enzyme activities indirectly [30].

Havakhah et al. showed in their study that investigated the effect of NOS on ischemia-reperfusion injury (IRI) in rats that MDA and DNA damage were decreased and the reduced thiol levels were increased [31]. Administrating DMN with TQ did not prevent from an increase in oxidative stress, also did not improve the antioxidant parameters. Thymoquinone (TQ; 2- isopropyl-5-methyl-1,4-benzoquinone), the active compound of nigella sativa, is shown by many studies to have antibacterial, antihypertensive, antidiabetic, neuroprotective, anti-inflammatory ve antiapoptotic properties [3]. In the study of Elsherbiny et al., it was shown that Doxorubucin (DOX), a chemotherapeutic agent, protected the renal tissue against DOX by capturing free radical with its quinone structure, by increasing the molecules which control the antioxidant molecules such as nuclear factor erythroid 2-related factor and by decreasing lipid peroxidation in renal tissue and increasing antioxidant enzyme activity in the rats with DOX-induced nephrotoxicity [32].

In conclusion, SMN has prevented the kidney damage via its antioxidant effect. Similar studies may been designed with different doses of DMN, NSO, TQ and SMN on this subject.

The authors declared no potential conflicts of interest with respect to the research, authorship, and/or publication of this article.