Objective: To determine the frequency of progression to spontaneous bacterial peritonitis in cirrhotic patients with non-neutrocytic bacterascites.

Methodology: This was a descriptive cross-sectional study. A non-probability consecutive sampling technique was used, and sample size of 127 was calculated using WHO calculator, with a margin of error of 0.07 (7%), and a level of significance of 0.05 with a 95% confidence interval. Our study comprised of 127 inpatients aged between 18-75 years, who were admitted between August 2015 to February 2016, in the gastroenterology ward of the Aga Khan University Hospital, Karachi. Those who fulfilled the inclusion criterion were included in the study.

Results: Among 127 patients, 63 (49.6%) were diagnosed to have spontaneous bacterial peritonitis (SBP) or its variants. Among them, classical spontaneous bacterial peritonitis was present in 18 (28.57%) patients, 34 (53.96%) patients were found to have culture negative neutrocytic ascites, and 11 patients (17.46%) were reported to have non-neutrocytic bacterascites. Our data showed that among 63 (49.6%) cases of spontaneous bacterial peritonitis, 29 (46.03%) of the samples of ascitic fluid had positive culture reports. E. coli was identified as the most frequently isolated organism that was cultured among 17 (58.62%) out of the 29 cases of SBP; Staphylococcus aureus was confirmed among 4 (13.79%) case; Streptococcus pneumoniae was noted among 3 (10.34%) patients; our data demonstrated that there were 3 (10.34%) cases of Proteus and Klebsiella was confirmed among 2 (6.89%) cases. Out of 11 patients who initially had non-neutrocytic bacterascites, E. coli was the most frequently isolated organism 6 (54.54%), followed by Klebsiella which was seen in 2 18.18%) patients, Staphylococcus aureus was noted in 2 (18.18%) cases, and there was 1 case of Proteus (9.09%).

Conclusion: The results of this study show that the frequency of progression from non-neutrocytic bacterascites to classical SBP is higher than previously reported among Pakistani population. Consequently, patients who have non-neutrocytic bacterascites need to be closely followed and a repeat diagnostic paracentesis should be performed in all such patients, so that progression to classical SBP is detected early and treated accordingly, hence preventing mortality.

Liver cirrhosis is a chronic illness which has many serious complications, one of which is ascites [1]. Patients who are suffering from ascites and cirrhosis tend to have an increased susceptibility to bacterial infections. Literature shows that Spontaneous Bacterial Peritonitis (SBP) could result in mortality and it is most the commonly noted bacterial infection [2]. SBP is an ascitic fluid infection,which lacks a distinct surgically curable intra-abdominal source [3]. Literature shows that the prevalence of SBP ranges between 7% to 30% among liver cirrhosis patients who present with ascites [4,5]. In Pakistan the reported prevalence of SBP is between 28% to 31% among subjects who have cirrhosis and ascites [6,7].

The three variants of SBP are Culture Negative Neutrocytic Ascites (CNNA), classical SBP, and Non-neutrocytic Bacterascites (NB) [8]. In asymptomatic patients with cirrhotic ascites, the prevalence of CNNA is highest (2.1%) as reported in literature, followed by NB (1.9%) and classical SBP (1.4%) [8].

It has been noted that non-neutrocytic bacterascites typically is characterized by colonization stage of ascitic fluid infection, and this phase is often asymptomatic. However, evidence suggests that patients with Nonneutrocytic Bacterascites presenting with symptoms (e.g fever) can progress to classical SBP very rapidly. One research indicated a 50 to about 170 fold increase in the Polymorphonuclear (PMN) content of the ascitic fluid within a matter of 40 to 70 minutes [9]. Additionally, recent data suggests that non-neutrocytic bacterascites is independently associated with adverse clinical outcomes of patients with end-stage liver disease [10].

It is estimated that about half of the untreated patients succumb to death due to SBP, hence underlying the significance of prompt detection and treatment for such subjects [11]. There is literature regarding the frequency of SBP and its variants among subjects with decompensated liver cirrhosis [6]. Nevertheless, data pertaining to the development from non-neutrocytic bacterascites to the stage of classical SBP is rather limited, more so from a third world country like Pakistan where burden of liver cirrhosis is huge [12]. Additionally, studies indicate the conversion of non-neutrocytic bacterascites to classical SBP, is associated with a significantly increased death rate [6]. This was the rationale for conducting this study. Our objective was to determine the frequency of progression to spontaneous bacterial peritonitis in cirrhotic patients with non-neutrocytic bacterascites. This would enable physicians to promptly detect such cases and appropriately intervene, thus reducing the burden of morbidity and mortality among such patients with end stage liver disease.

This was a descriptive cross-sectional study. A nonprobability consecutive sampling technique was used, and sample size was calculated using WHO calculator, taking prevalence of advancement from Non-neutrocytic Bacterascites (NB) to classical SBP as 39.28% [13], with a margin of error of 0.07 (7%), and a level of significance of 0.05 with a 95% confidence interval. We calculated a sample size of 127 patients. All patients aged between 18- 75 years, who had previously documented decompensated liver cirrhosis based on clinical (presence of ascites, splenomegaly, spider nevi, palmar erythema, clubbing or gynaecomastia) and ultrasonographic (coarse liver echotexture, irregular margins, ascites and splenomegaly) features, and who were admitted between August 2015 to February 2016 in the gastroenterology ward of the Aga Khan University Hospital, were included if they met the inclusion criteria. The following patients were excluded from this study: Patients who were receiving antibiotics or who had received antibiotics during last 30 days; patients who had recurrent SBP, with a time interval between two episodes ≤ 6 months; patients with secondary causes of peritonitis for instance gut perforation; those with ascites secondary to tuberculosis, malignancy, or unknown etiology; and those patients who had abdominal pain, fever, or hepatic encephalopathy.

This research was conducted after obtaining exemption from the ethical review committee (2406-Med-ERC-12) and as per ICH-GCP guidelines. Written informed consent was obtained from the patients included in the study. Patient information was kept confidentially, and a unique identifier was assigned to each patient’s record, to maintain anonymity. The included subjects had undergone diagnostic paracentesis within a period of 24 hours of hospital admission, which is a usual practice in our hospital. Ascitic fluid analysis was carried out: Culture, cytology, and biochemical analysis. Demographic data of the patients was obtained through a pre-designed questionnaire. The data was collected regarding age, gender, co-morbidities, and laboratory data including ascitic fluid culture along with organism isolated in the ascitic fluid. 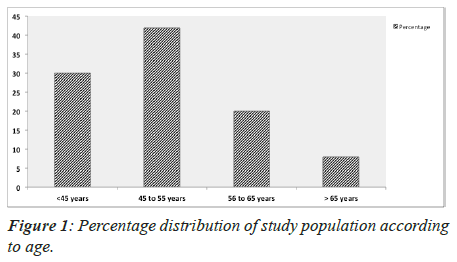 Figure 1: Percentage distribution of study population according to age.

Table 1. Distribution of baseline characteristics of the patients.

Table 2. Distribution of the Pattern of SBP among the patients.

Our data showed that among 63 (49.6%) cases of spontaneous bacterial peritonitis, 29 (46.03%) of the samples of ascitic fluid had positive culture reports. E. coli was identified as the most frequently isolated organism that was cultured among 17 (58.62%) out of the 29 cases of SBP; Staphylococcus aureus was confirmed among 4 (13.79%) case; Streptococcus pneumoniae was noted among 3 (10.34%) patients; our data demonstrated that there were 3 (10.34%) cases of Proteus and Klebsiella was confirmed among 2 (6.89%) cases (Table 3).

Table 3. Distribution of culture patterns among patients with SBP.

Table 4. Distribution of the culture patterns among patients with Non-neutrocytic bacterascites.

When we compared progression to classical SBP with different parameters of study variables such as age group, gender distribution and co-morbid conditions, the results we found to be statistically insignificant and p-values were found to be >0.05. Stratifying data by age showed that was no statistically significant different in the number of classical SBP cases across age groups (P-value=0.460); across gender (P-value<0.0001); status of diabetes (P-value=0.552); status of hypertension (P-value=0.501); and status of ischemic heart disease (P-value=0.51).

Spontaneous bacterial peritonitis is a common and possibly terminal complication among patients with liver cirrhosis who have ascites. The frequency of spontaneous bacterial peritonitis in hospitalized patients with liver cirrhosis varies from 7% to 23% in the developed world [5]. However, its prevalence is noted to be much higher at about 33% in Pakistan [14,15]. Our data showed that the frequency was 49.6%, analogous to a study by Iqbal S et al. [15]. It indicates that this serious complication of liver cirrhosis may be on the rise in this part of the world. Other factors, which may be responsible, include undernourishment, poverty and advanced liver disease.

In this study, E. coli was the most frequently cultured organism (58.62%), followed by Staphylococcus aureus (13.79%), Streptococcus pneumonia (10.34%), Proteus (10.34%) and Klebsiella (6.89%). This microbial pattern corroborates the results from other studies done locally and internationally [13,16]. We found non-neutrocytic bacterascites to be a common variant of SBP in our study (approximately 18%).

The mortality rate among patients with non-neutrocytic bacterascites is rather low as compared to those with classical SBP, among whom it approaches 50% [15]. It is because of this low mortality rate that treatment of such patients with antibiotics is not recommended. This said, the lack of polymorphonuclear cells in one of the ascitic fluid specimens does not necessarily omit the likelihood of polymorphonuclear cells entering the ascitic fluid in sizable amount in a relatively short time. Therefore, empiric antibiotic therapy in this setting could potentially help prevent death from spontaneous bacteremia or other extra-peritoneal bacterial infection. Hence, if patients with non-neutrocytic bacterascites develop symptoms of abdominal pain, fever, tenderness or hypotension, then a repeat paracentesis for ascitic fluid D/R, a culture and sensitivity need to be carried out. If the results suggest that there is classical SBP, then the patient should be treated correspondingly. Most physicians treating patients with decompensated liver cirrhosis usually adopt this particular approach.

There are, however, international guidelines which distinctly state that since the diagnosis of non-neutrocytic bacterascites is made 48-72 hours after initial paracentesis (the time required for a positive culture growth), a repeat diagnostic paracentesis is recommended, regardless of symptoms. If the second sample has a polymorphonuclear count >250/mm3, then treatment for SBP needs to be commenced. On the other hand, if the polymorphonuclear count is < or >250/mm3 and a second set of cultures come out to be positive, treat as for SBP. If it is <250/mm3 and the second set of cultures is also negative, no additional intervention is recommended [7,19].

There is enough evidence to support the notion that host defences play an important part in defining the outcome of bacterial colonization of ascitic fluid. However, the virulence of the organisms is also important. Abe and colleagues reported results of a retrospective study that show a significantly higher incidence of Gram-negative bacteremia in critically ill cirrhotic patients admitted in intensive care unit patients with septic shock as opposed to those with sepsis or severe sepsis [20]. Although the number of patients in our study was not enough to achieve statistical significance with regards to the organisms likely to evolve from colonization to classical SBP, our work clearly shows that gram negative organisms are more notorious in doing so, as compared to the gram positive ones. In our, three out of four patients who progressed to classical SBP had gram negative organisms in their ascitic fluid culture.

This study is unique as it is taking into account both the prevalence of progression to classical spontaneous bacterial peritonitis in decompensated cirrhotic patients with non-neutrocytic bacterascites as well as the specific organisms isolated from the ascitic fluid culture of such patients. However, its biggest limitation is that it is a single center study; hence the results cannot be generalized to the cirrhotic population at large.

Non-neutrocytic bacterascites is a recognized variant of spontaneous bacterial peritonitis. However, different schools of thought exist as to whether to actively treat such individuals or to keep them on conservative management and follow-up. Our study results show that the frequency of progression from non-neutrocytic bacterascites to classical SBP is greater than previously reported among Pakistani population. Therefore, we propose that cirrhotic patients who have NB need to be closely followed and a repeat diagnostic paracentesis should be performed in all such patients. We believe that by doing so, early detection and prompt treatment can be initiated in those cirrhotic individuals who have progressed to classical SBP. This timely intervention can be instrumental in curtailing the mortality in these immuno compromised group of patients.

Authors have declared that they have no conflict of interest.