The objective of the present study is to study the prevalence of subclinical hypothyroidism and its association with dyslipidemia. Thyroid hormone maintains the development and metabolism of the body. Thyroid dysfunction has been associated with complications like infertility, diastolic hypertension, ischemic heart disease, psychiatric disorders. 1157 sub-jects attending the NRI Hospital, Guntur for routine check up were taken into study. The patients were not under any medication. TSH and lipid profile was determined for all the subjects. The thyroid screening was done on Centaur CP and lipid profile on Dade Behring autoanalyzer. FT4 was estimated in subjects with TSH level 5.5 to 10μIU/ml to confirm SCH. Result: The prevalence of Subclinical Hypothyroidism (SCH) was 8.29% and the SCH was associated with increased dyslipidemia. Total cholesterol, triglyceride, LDL were raised up to 317 mg/dl, 575mg/dl and 201mg/dl respectively. TSH level significantly correlated with total cholesterol and LDL cholesterol.

Thyroid disorders are the most common endocrine disorders. Thyroid disorder may occur at any stage of life. They are more commonly encountered in the mid age and adulthood. Thyroid hormones influence nearly all major metabolic pathways. Their most obvious and well known action is the increase in basal energy expenditure obtained by acting on protein, carbohydrate and lipid metabolism. The lipid metabolism is more influenced by the thyroid hormone [1]. Hypothyroidism is defined as a deficiency of both T3 and T4 resulting in decreased thyroid activity. Biochemically decrease in T3 and T4 concentration leads to hyper secretion of pituitary TSH and an amplified increase in serum TSH levels [2]. Hypothyroidism is a progressive disorder presenting with different degrees of thyroid failure and metabolic consequence [3]. Hypothyroidism is a well known cause of hyperlipidemia. In hypothyroid patients the most frequent lipid abnormality is hypercholesterolemia, mainly due to an increased concentration of low density lipoproteins (LDL). Elevation of very low density lipoproteins (VLDL) and high density lipoproteins (HDL Cholesterol) have also been reported. Plasma triglycerides are increased because of an enhanced esterification of fatty acids at hepatic level [1].

This is a cross sectional study including subjects reporting to NRI General Hospital, Guntur from June 2009 to May 2010 for routine check up. The subjects in the study group had no history of medication for any thyroid disorder, thyroidectomy or any exposure to radioiodine. None of the subjects were diagnosed for any renal, hepatic or pancreatic disorder, diabetes mellitus or familial hypercholesterolemia. Secondary data of the subjects was collected from the outpatient card and report form. The subjects with elevated TSH levels (5.5μIU/ml to 10μIU/ml) but normal FT4 were considered as SCH (Sub-clinical Hypothyroidism).

5 ml venous blood sample was collected from each patient after an overnight fast. The blood was allowed to clot at room temperature and then centrifuged at 3000 rpm for 5 minutes. Serum was separated and was used for analysis. The serum levels of TSH and FT4 was estimated by Siemens Centaur CP kit on Centaur CP. Lipid profile (Total Cholesterol, Triglyceride and AHDL cholesterol) was analyzed using Siemens Dimension Clinical Chemistry (Flex reagent cartridge) kits on Dade Behring instrument. LDL cholesterol was calculated by Friedewald’s formula. BioRad Controls were used as Quality Control material. The samples were analyzed only when the control values were within one standard deviation. 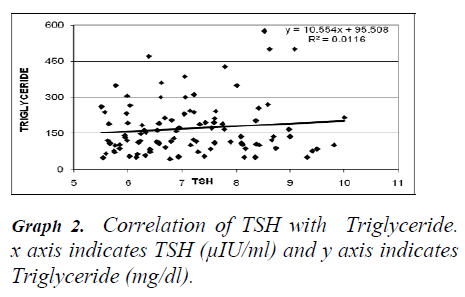 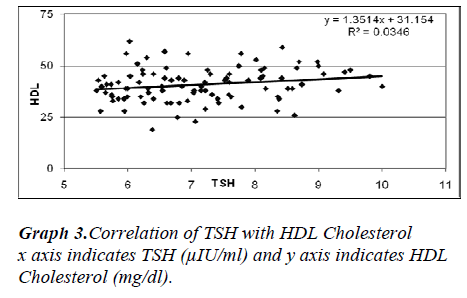 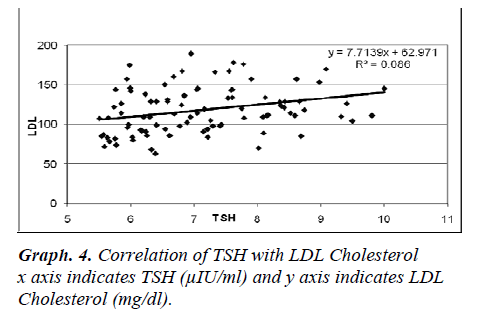 Cardiovascular system is very sensitive to minimal defects of circulating thyroid hormone and cardiovascular diseases are associated with overt hypothyroidism. The abnormalities in myocardial contractility and the changes of lipoprotein profile are frequently documented in hypothyroid patients. Therefore SCH may be considered a true risk factor for the development of coronary heart disease [7]. At a younger age, SCH has more severe pathophysiolgical effects resulting in accelerated vascular disease through dyslipidemia, endothelial dysfunction or a direct effect on myocardium. With advancing age subjects that are relatively resistant to the adverse vascular effect of SCH may survive, leading to an attenuation of this effect in old age [8].

Whickham survey defined that younger women with a mildly TSH level (6-9mU/L) had a lower risk for progression. The risk of progression was not evenly distributed throughout the follow up period. In patients with SCH and elevated total cholesterol level, L-thyroxine treatment may reduce serum cholesterol and thereby decrease the incidence of coronary artery disease, stroke, and peripheral vascular disease [9].

Studies reported disturbance in the lipid metabolism in patients with SCH [4,10,11,12] but, Rotterdam study report that total cholesterol was not elevated in SCH [13]. SCH was reported to be a strong indicator for the risk of atherosclerosis, CAD and MI [14,15]. SCH group in the present study had higher levels of serum total cholesterol and LDL cholesterol which was found to be in positive correlation with TSH level. Similar report was demonstrated in the study done by Serpil Turhan et al. [16] SCH is relatively common among hypercholesterolemic patients, thus the serum TSH levels should be screened [5,9,17]. The severity of lipid abnormality does not parallel with the degree of hypothyroidism. The triglyceride and HDL cholesterol did not correlate with the TSH levels in the study. Triglyceride levels were not raised in the present study contrary to few studies [12,15]. In this study the elderly men and women were more commonly affected with SCH similar to other studies [13,17,18,19].

SCH impairs ventricular function. LV diastolic dysfunction was found in SCH many studies, and this abnormalities may be reversed by a short term substitutive L-thyroxine therapy [7,14,15,20]. Mirjam et al reported that after 48 weeks of L-thyroxine treatment, total cholesterol and LDL cholesterol were significantly reduced whereas HDL-cholesterol and triglycerides remained un-changed. Thyroid hormone replacement in hypothyroidism has been observed to result in increased LDL clearance due to increased LDL receptor activity in the liver [21]. Thyroid hormones enhance intravascular catabolism of VLDL, triglycerides and lower plasma total cholesterol and LDL cholesterol. It is clear that thyroid hormone replacement therapy has beneficial effects on the serum lipid profile and on the risk of CAD in overt hypothyroid cases [7,8,15,17].

The community should be screened for SCH in high risk group to identify the patients and treat them. Treatment of SCH in pregnant women is mandatory to decrease the risk for pregnancy complication and impaired cognitive development in offspring. Children with SCH should be treated to prevent growth retardation [7,22,23]. Studies have reported psychiatric problems such as panic disorder, anxiety and depression disorders are more common in SCH [24].

1157 subjects were screened, 96 were SCH 45(46.87%) males and 51(53.13%) females. All SCH subjects had dyslipidemia and TSH levels were significantly correlated with total cholesterol and LDL cholesterol.

A longitudinal multicentric study will throw more light on the subject. Metaanalysis may also be taken up for better comprehension of the hypothesis.