Prevalence and association of anemia with CKD: A hospistal based crosssectional study from Nepal.

A hospital based cross-sectional study was conducted in department of biochemistry, Tribhuvan University Teaching Hospital (TUTH), Nepal. We showed the prevalence of anemia in chronic kidney disease (CKD) and association between anemia and CKD. Total of 163 predialysis patients in all stages of CKD and 163 of non-CKD healthy controls were enrolled. CKD was defined and classified as per national kidney foundation guidelines. We analyzed biochemical profile on BT 2000 Plus biotechnica instruments - clinical chemistry analyzer and hematological profile on xs-1000i. Descriptive statistics and testing of hypothesis were used for the analysis using SPSS 16 software. The incidence of anemia in stage I, Stage II, Stage III, stage IV, stage V and all CKD were found to be 17.64%, 27.78%, 48.38%, 74.19%, 80% and 47.85% respectively. Hemoglobin level was significantly lower in CKD cases than non-CKD controls (P-value <0.001). 47.8% of CKD cases and 13.5% of non-CKD controls had anemia (Odds ratio 5.88, P-value <0.001). 41.3% of male CKD cases and 8.7% of male non-CKD controls had anemia (Odds ratio 7.39, P-value <0.001). 56.34% of female CKD cases and 13.5% of female non-CKD controls had anemia (Odds ratio 5.25, P-value <0.001). Anemia was seen in all stages of CKD. Prevalence of anemia increased as kidney function decreased. A strong association was found between an anemia and CKD.

Chronic kidney disease is a worldwide public health problem. Major outcomes of CKD include progression of CKD to end stage renal disease (ESRD), development of different complication due to impair kindney function and increased risk for development of cardiovascular disease (CVD) [1]. One of the common complications of CKD is the anemia which is associated with increased risk for cardiovascular disease (CVD), increased morbidity and mortality especially in high risk group [2]. Anemia is one of the nontraditional risk factor for CVD [3]. Development of anemia in CKD is basically due to complete or relative deficiency of erythropoiten. Besides erythropoietin deficiency, different factors including blood loss, decreased half life of red blood cells, iron deficiency, inflammation etc may contribute to develop anemia in CKD [4]. Some studies reported that Hb-level start to decrease even early renal deficiency around 70 ml/min in male and 50 ml/min in female [5]. Furthermore, anemia in CKD aggravates the adverse outcomes in CKD and worsens the comorbidities of diabetes and hypertension [3].Early identification of anemia in CKD retards the development of end stage renal disease and consequently improves from CVD morbidity and mortality [6]. CVD is the leading cause of mortality in patients having CKD and accounts of 58% patients dies from CVD in CKD [7]. Even mild form of renal insufficiency has been reported to be linked with increased incidence of CVD. Incidence of mortality due to CVD in CKD patients has 10 to 20 times higher when compared with general population [8]. To the best of our knowledge, anemia in different stages of CKD has not been reported from Nepal. Thus we had undertaken this study to find out the incidence of anemia in patients with different stages of CKD as well as association of anemia and CKD in hospital based setting.

Study design and the participants

This hospital based cross-sectional study was conducted in the Department of Clinical Biochemistry in collaboration with Department of Internal Medicine (nephrology unit), Tribhuvan University Teaching Hospital, Institute of Medicine (TUTH,IOM).

This study was carried out from 2008 February to 2010 August. The study population included patients visiting medical out patients door (OPD) and nephrology unit of TUTH from different parts of Nepal. A medical history was taken and a physical examination was performed by a physician. After having the written consent from the participants, 163 participants over the age of 16 years and below 65 years having CKD were eligible for the assessment of anemia. Furthermore, age and sex matched non- CKD healthy controls were also enrolled. Demographic and anthropometric data including age, sex, weight, height, BMI and blood pressure were collected from the participants. Five mL of blood was drawn by venous puncture and spot urine sample were also collected. Collected blood sample was divided into two vials i.e. in EDTA vial for hematological tests and in plain vial for biochemical test. After clotting of blood in the plain vial, serum was separated, within an hour; by centrifugation at 3000 - 5000 g for 5 min. Serum was used serum creatinine level. The Urine sample was also processed on the same day and estimated for urinary albumin and creatinine. Laboratory standard operation procedures were maintained for all laboratory analysis. Internal quality control sera, both normal and pathological, were also run for each lot of the test, for the validation of the results.

Subjects having age less than sixteen years and more than sixty five years, hemolytic disorders, known case of anemia due to other than CKD, Pregnancy, liver disease, endocrine disorder especially thyroid dysfunction, under medication for anemia were excluded from study.

Anemia was defined as hemoglobin level less than 13.0 g/dL for men and less than 12.0 g/dL for women as per World Health Organization (WHO) guidelines. CKD was defined as either (a) the presence of microalbuminuria (> 3.4 mg albumin/mmol creatinine) as a marker of kidney damage or (b) reduced excretory function with an eGFR < 60 mL/min/1.73 m2 as a marker of kidney dysfunction or both for more than two months. Furthermore, CKD was defined and classified into five stages of CKD as per National Kidney Foundation guidelines.

\The formula of Cockcroft and Gault equation was used to calculate eGFR [9]. Calculation of eGFR in males:

Ethical approval was taken from the ethical board of Institute of Medicine, Kathmandu.

The data was analyzed using Excel 2003, R 2.8.0 Statistical Package for the Social Sciences (SPSS) for Windows Version 16.0 (SPSS Inc; Chicago, IL, USA). Association between anemia and chronic kidney disease was tested by Chi-square test. Odds Ratio was also calculated. Comparison of mean value of continuous data was tested by ttest and ANOVA test. A p-value of < 0.05 (two-tailed) was used to establish statistical significance.

One hundred and sixty-three CKD patients (92 males and 71 females) and 163 (92 males and 71 females) non-CKD control subjects had enrolled for the study. There was no significant age difference between the mean ages of the patients and the control subjects (P=0.09). The mean comparison of different characteristics of the study population are shown in Table 1 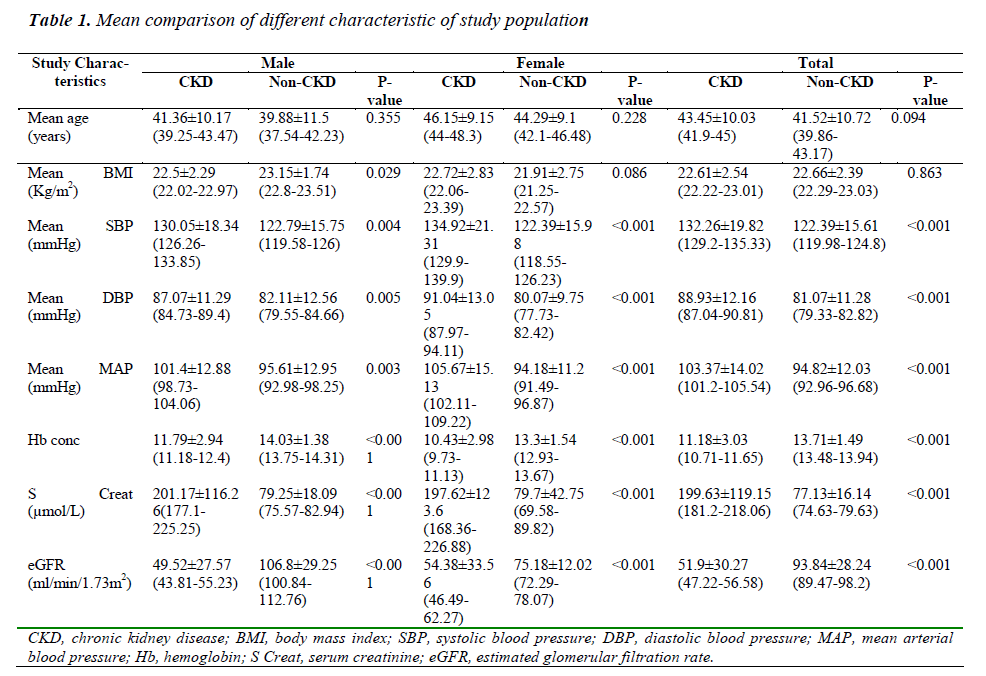 Out of total 533 bacterial isolates, 53.7% were MDR. The highest number of MDR among gram-negative bacteria was seen in K. pneumoniae and Pseudomonads (figure 1). Non-fermentative bacteria were more MDR (77.8%) than Enterobacteriaceae (68.9%) isolates. Multiresistance was more common in isolates of K. pneumoniae and Acb complex from inpatients (Table 2). 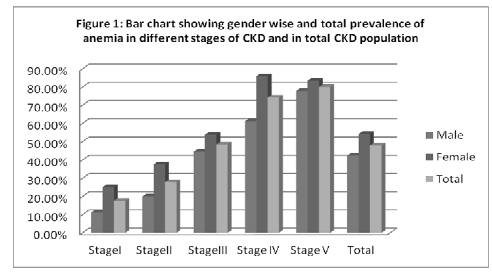 Figure 1: Bar chart showing gender wise and total prevelence of anemia in different stages of CKD and in CKD population

Table 2: Comparison of Hb-level and RBC indices with different stages of CKD stage

Table 3 shows the categorical association between anemia and CKD. To define anemia, we had taken cutoff point for hemoglobin level was 200 mg/dL (2.26 mmol/L). Anemia was defined by using the World Health Organization (WHO) guidelines for hemoglobin level of < 13 g/dL for men and < 12 g/dL for women. Anemia was found in male CKD cases, female CKD cases and total CKD cases were found to be 41.3%%, 56.34%% and 47.8%% respectively. Similarly, anemia found in male non-CKD healthy controls, female non-CKD healthy controls and total non- CKD healthy controls were found to be 8.7%, 19.7% and 13.5% respectively.

Table 3: Distribution of Study Population according to anemia in male and Female (Anemia defined by using the World Health Organization (WHO) definition of hemoglobin of < 13 g/dL for men and < 12 g/dL for women).

Our study reported a high prevalence of anemia in nondialysis CKD cases of our study setting in TU Teaching Hospital, Nepal with overall incidence of 47.85%. The high incidence of anemia in overall CKD patients in our study may be reported due to significant number of anemia in late stage CKD in whom the mean value of hemoglobin concentration were found to be 9.41±2.9 gm/dl and 8.39±2.75 gm/dl respectively, for stage IV CKD and stage V CKD. Afsar et al [10] and Suiga et al [11] reported that 75% and 73.1% respectively had anemia in CKD patients. Both of their findings were higher than our findings. In our study, 38.04% of patients had advance stages of CKD i.e. stage IV CKD and stage V CKD. Disproportionately distribution of advance renal disease in whom very high number of anemia may be accounted for different high prevalence of anemia in CKD in different studies. We found that 17.64% of stage I CKD, 27.78% of stage II CKD, 43.38% of stage III CKD, 74.19% of stage IV CKD, 80% of stage V CKD and 47.85% of all CKD had anemia. Mc Clellan et al conducted a study in a large number patients i.e. 5222 patients in a US multicentre survey by using cut off point of hemoglobin concentration 12 gm/dl to define anemia had documented overall incidence of anemia in CKD was 47.75% which is very much similar to our study [12] . However, Mc Clellan et al reported 26.7% had anemia in stage III CKD had progression to 75.5% had anemia in stage V CKD. Similarly, valderrabano et al documented the much higher incidence of anemia in CKD patients was 68% though they used cut off point for hemoglobin concentration 11 gm/dl to define anemia [13]. Different factors are associated with CKD such as absolute and/or relative erythropoietin hormone deficiency, inflammation and oxidative stress may advocate the development of anemia in CKD. High degree of anemia may be related to the peculiarity to the environment including parasitic infestation e.g. hookworm infestation, malnutrition, deficiencies of iron, folate, vitamin B12 etc. Iron profile, folic acid and vitamin B12 were not assessed in this study which is our limitation. Regardless of this limitation, our study advocates the high prevalence and strong association of anemia with CKD. Some other factors including platelet dysfunction causes an increased risk for gastrointestinal bleeding, shortening of half life of RBC and hemolysis due to uremic toxin accumulation. The extant of anemia increases progressively with the declining glomerular filtration rate [14]. In our study the incidence of anemia was found 80% in stage V CKD. Our result corroborate with the study of McClellan W et al [12]. Furthermore, significant decreased of hemoglobin level, PCV, RBC counts, MCV, MCHC and MCH with the stages of CKD accounts for anemia of CKD is also as a part of anemia due to chronic disease besides erythropoietin hormone deficiency.

This cross-sectional study was undertaken in a single tertiary care hospital of Nepal. The enrolled patients were from the different parts of Nepal from different community. Our results may be representative of the entire country. Yet this study provides the much needed data regarding degree of anemia in CKD population in Nepal which has not been done before so far. Comprehension study is required in large population for the estimation of prevalence of anemia in CKD in Nepalese population. Study on different tertiary level hospital of different parts of Nepal involving a large population size will be more representative of entire country.

In conclusion, we documented a high prevalence of anemia in all stages of CKD. We found as much as 17.64% in patients with stage I CKD and reaching 80% in patients with stage V CKD. A strong association between anemia and CKD was found. Anemia in CKD is the established risk factor for the development of cardiovascular disease. Therefore, it is necessary to identify anemia in CKD as soon as possible and manage them properly before development of cardiovascular disease.