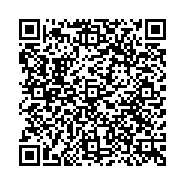 Diabetes is one of the most lethal silently killing diseases because of its massive prevalence and wide numbers of secondary effects. Insulin proves it as a game changer in the treatment of diabetes. Oral route would be most favourite for the administration of such medications as it is the most conventional and comfortable route, however, due to bioavailability consideration, insulin is administered through parenteral route. Oral absorption of insulin is restricted by various absorption, chemical and enzymatic barriers and provides a critical scientific challenge. In recent years polymer based nanoparticles are showing promising results for oral insulin delivery, though such formulations are not marketed yet, they are still under development. In this review we shall discuss about recent developments in nanoparticle based oral insulin drug delivery using various polymers like poly (lactide-co-glycolic acid), Polyurethane-Alginate, cashew gum etc.

Diabetes is one of the most wide spread pandemic for complete human population at present decades. Due to its massive prevalence and wide numbers of secondary effects, diabetes is one of the most dangerous silent killer and it cause almost three million deaths per year throughout the world, as mentioned by the World Health Organization [1]. The International Diabetic Federation indicated that almost 366 million people were affected by different types of diabetes in 2011 and estimated that the sufferer may raise up to 552 million by 2030 [2]. In an average, the life expectancy of people with type 1 diabetes is reduced to about 20 years and for type 2 diabetes the number is about 10 years [3].

In 1922, the revelation of insulin from canine pancreas was a milestone in the history of diabetes therapy with a Nobel Prize victoriously triumphing, which had a great paramountcy in biomedical research [4]. Insulin proves it as a game changer in the treatment of diabetes. From the time of this revelation, peptides and proteins have been used as biopharmaceuticals because of high activity, specificity and effectiveness compared to conventional system [5]. Oral route would be most favourite for the administration of such medications as it is the most conventional and comfortable route [6,7] but suitable oral formulations for oral insulin delivery are still under development [5]. Hence, insulin is administered through parenteral route [8].

The utilization of biocompatible and biodegradable nanoparticles is showing promising advantages toward oral administration of proteins and peptides [3]. For the enhancement of the oral bioavailability of insulin, and to provide a stable and biocompatible environment to the encapsulated drug, polymeric nanoparticles have been claimed to be the impeccable candidates for oral insulin delivery [9].

Insulin delivery through oral route is a big challenge because of several obstacles which limit its effect. When we administer insulin orally, it gets exposed to the chemical and enzymatic barriers of the GI tract. Apart from it, the intestinal transport of insulin is restricted because of the presence of absorption barrier in the intestinal epithelium [10].

The environment of GIT for proteins and peptides are very stern because our digestive system is designed to breakdown them without doing any difference [11]. Protein and peptide drugs are degraded in stomach by pepsin after that in small intestine by trypsin, chymotrypsin, elastase and carboxypeptidases [12]. They are again digested by aminopeptidases in the brush-border membrane when passing across the intestinal enterocytes. Among all, insulin is mostly degraded by hymotrypsin, trypsin and carboxypeptidases in the intestinal lumen as well as in the mucus layer [13]. Insulin also can be degraded by insulin- degrading enzyme, present in cytosol [14]. After all, if some amount of insulin can successfully transported across the intestinal epithelium, it will further metabolised by liver first pass metabolism [15,16].

In oral insulin delivery the insulin must transport along the GIT, successfully transport across the intestinal epithelium and reach the systemic circulation. GIT has variation in pH environment which can destroy protein drugs like insulin. The GI pH is highly acidic in stomach (pH 1.2-3.0) and slightly basic in intestine (pH 6.5-8.0) [17]. This pH difference may cause pH-induced oxidatan, deamidation or hydrolysis of protein drugs; as a result the effect of such drugs gets deactivated [7].

The first barrier is mucus membrane, which act as enzymatic and diffusional barrier [18]. In every 4-5 hours mucus is continuously secreted and detached from epithelial surface [19]. Apart from all, the electrostatic repulsion between protein drugs and the mucus layer (negatively charged) obstruct the intimate contact between such drugs and the epithelial cells [18].

Intestinal epithelium is the next barrier. The main problem in the absorption of hydrophilic insulin is that it cannot easily cross through lipid bi-layered epithelial cell membrane to systemic circulation [10].

Protein drugs are susceptible to physical and chemical degradation during its manufacturing, transport and storage [20].

An insulin carrier should:

(i) Have the ability to survive against Gastrointestinal (GI) enzymes and pH gradients and increase insulin permeability through GIT.

(ii) Provide a stable and biocompatible environment to make sure that the activity of insulin should remain unaffected during particle processing and insulin release [21,22].

(iii) Enhance its intestinal residence time, so that the permeability of the mucosal epithelium increased, as a result the absorption of drug increase and make available the intact drug to the systemic circulation.

(iv) Deliver required amount of insulin at specific rate to control the concentration of glucose in blood.

To increase the oral bioavailability of insulin several strategies are introduced like use of polymeric delivery systems, protease inhibitors, chemical modification of proteins or permeation enhancers [23] but the bioavailability is still below the standard [24]. A combination of such strategies can solve the problem [25].

For physiological insulin, liver is most important target to control blood glucose level [27] but only about 20% of subcutaneously administered insulin can reach the leaver [28] but if we administer it through oral route, it will mimic the physiological condition as after passing the epithelial membrane of GIT, it first comes to the liver [8,5]. As the oral route can mimic the physiological condition, the side effects like risk of hypoglycemia episodes, immune responses, insulin resistance in type 2 diabetic patients will reduce [27]. Moreover irritation, redness, inflammation, infection at the site of injection will also be avoided in oral administration [3]. In other hand oral insulin will less costly, require less specialized person to prepare and easy to transport and store [29].

However still no oral insulin formulation is marketed, they are still under development. In GIT there are several barriers which highly reduce the bioavailability of orally administered insulin [3,8,30].

Transport mechanism of nano Particles across the intestinal epithelium

Figure 1 shows the schematic diagrams demonstrating various procedures of the uptake of nanoparticles in the epithelium of intestine.

By using FT-IR comparative spectrum, proper blending of polyurethane and alginate is observed. It also determines the insulin encapsulation efficiency with polymer blend.

After doing XRD we can determine that after the addition of alginate the blended film becomes more amorphous than PU. It also confirms superior miscibility of blended film and due to intermolecular interaction, the deterioration of regularity of PU. 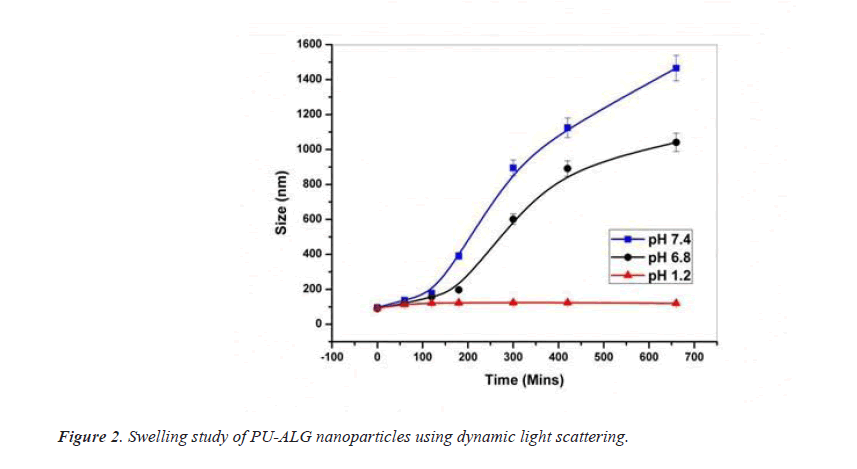 In animal testing it shows that the NPs are considerably wedged to the mouse intestinal limen, subsequent to washing with pH 7.4 buffers for half hour. This shows the good mucoadhesive property of PU-ALG NPs (Figure 3).

Figure 3: Ex-vivo mucoadhesion study of PU-ALG nanoparticles (A. before and B. after washing with pH 7.4 buffer).

After doing liver function test it is confirm that there is no liver toxicity associated with oral insulin delivery using PU-ALG NPs. After doing nephron toxicity test it is confirm that PU-ALG NPs are safe polymeric carrier for oral delivery of insulin as it indicate no renal dysfunction. At animal model (mice), histopathological reports indicate no alteration in treated liver and kidney tissue [31] (Figure 5). 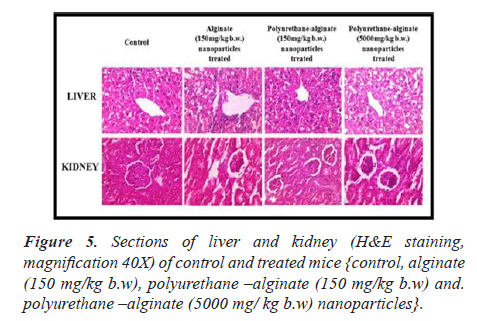 The exudate of the plant Anacardium occidentale is the source of cashew gum which is a polysaccharide biopolymer composed of simple sugar and glucuronic acid. It is used to prepare nanoparticle having the ability to incorporate active ingredient. Ionotropic gelation technique is used to prepare this type of nanoparticles where cashew gum is integrated with dextran sulfate and poloxamer containing insulin stabilized with chitosan, poly (Ethyleneglycol) and which is coated with albumin.

Before coating the particle size was 156 nm and after coating it is increased to 5387 nm. The coated finished particles has poly dispersive index 0.2 which indicate good distribution of particle size.

Before coating i.e. the uncoated NPs have zeta potential -27 mv; after giving the coating of chitosan on NPs, they have zeta potential -6.8 mv; the finished NPs after coating with albumin, it show a zeta potential of -51 mv; this indicate a stable system. Due to high repulsive force between the particles, suspension stability allows less formation of aggregate.

To protect the encapsulated insulin from harsh gastric environment and to improve NPs stability, albumin coating is given on NPs. These NPs have insulin encapsulation efficiency of 92% [32].

In insulin loaded L-Valin combined PLGA (Poly Lactic co Glycolic Acid) nanoparticle, the L- Valin is used for carrier mediated transport of insulin. The use of PLGA is very common in preparation of nanoparticle for oral delivery. It is biocompatible, nontoxic, biodegradable and environment friendly. In the presence of water, PLGA undergo degradation by hydrolysis and form two monomers, lactic acid and glycolic acid, which are the by-product of many metabolisms in normal physiological condition of our body.

The drug entrapment efficiency of ligand non-conjugated NPs are 50.37 ± 5.9% which is increased to 52.02 ± 1.5% after ligand conjugation. In vitro release study shows parent cumulative drug release of 48.58 ± 7.3% after 24 h for ligand non-conjugated NPs where after ligand conjugation it is decreased to 45.81 ± 8.7% which imply that coupling of valine to PLGA give a sustained release property to the NPs.

When insulin loaded PLGA nanoparticles was given orally, at initial two hours the blood glucose level is not decrease from 265.4 ± 8.5 mg/dL, which after 4 hours further decreased to 246.6 ± 2.4 mg/dL, which further reduced to 198.7 ± 7.1 mg/dL value at 8th h, delimitate the hypoglycaemic effect extend for 4 hours. But when the L-Valin conjugated formulation are administered orally, it produced hypoglycaemic effect within 4 h, i.e, at initial two hours blood glucose level is reduced from 277.7 ± 5.3 mg/dL which is further decreased to 216.9 ± 1.9 mg/dL., the hypoglycaemic effect extend for 12 hours. So L-Valine conjugation produces a sustained release activity to PLGA NPs [33].

The nanocomposite is made of food and drug administration approved layer of Montmorillonite (Mt) and biodegradable PLGA which is used for oral insulin delivery. The particles are reduced to their submicron size to maintain insulin’s bioactivity.

The insulin is protected from harsh acidic environment of GIT by montmorillonite, which is stable at acidic environment. During passing through the intestine the Mt-PLGA nanocomposites are retained in intestinal villi because of the submicron size of Mt-PLGA nanoparticles [34]. Mt provides mucoadhesive capabilities with increased intestinal/cellular absorption e?ciency in GIT [35,36]. Intestinal residence time and permeability of insulin is increased by their mucoadhesive property. This nanocomposites has encapsulation efficiency is up to 97% and can survive for up to 48 hours and the overall viability is above 65% for all concentration range (Figure 6).

The nanoparticles are biocompatible and don’t show any toxic effect on experimented cell line, so it is safe to use for insulin delivery [34].

The discovery of insulin in 1922 was truly a game changing strategy in the field of diabetes treatment as still now it is the most superior strategy of diabetes treatment. Though oral route is the most preferable route but there has no oral insulin formulation in market and still now parenteral route is used to deliver insulin, which associated with several disadvantages and side effects.

Though oral route of insulin delivery is associated with several advantages like patient compliance or can mimic physiological effect of insulin but the major problem is very poor bioavailability and polymeric toxicity. To overcome these problems; various natural, synthetic or semi synthetic polymers are used to prepare insulin. Encapsulated polymer based nanoparticles having advantages like non-toxicity, mucoadhesion, insulin stability etc.