Cardiovascular complications are the major cause of morbidity and mortality in diabetic patients. Oxidative stress is an independent risk factor by inducing production of oxygen free radicals in cardiovascular diseases. Because a relationship may be hypothesized between Paraoxonase [PON] and Malondialdehyde [MDA], the aim of this study was to investigate the relationship between PON and oxidative stress in patients with non insulin dependent diabetes mellitus [NIDDM] by evaluating MDA concentrations as indexes of oxidative stress. In the present case control study, the levels of total cholesterol, triglycerides and low density lipoprotein were high and the levels of high density lipoprotein were low in the NIDDM patients compared to healthy controls. MDA level was significantly high (p<0.05) and antioxidant activity of PON was significantly low (p<0.05) in patients with NIDDM as compared to controls. Our findings suggest the importance of assessing these markers of oxidative stress and antioxidant capacity of PON along with the other routine investigations in NIDDM patients for initiating the consequences of diabetes leading to coronary artery disease.

Diabetes mellitus is a chronic disorder resulting from a number of factors in which an absolute or relative deficiency of insulin or its function occurs. It is projected that by the year 2025, India alone would have 57 million diabetics mainly of the type 2 diabetes or non insulin dependent diabetes mellitus (NIDDM) constituting 90% of the diabetic population [1,2]. Irrespective of the ethnic background, the risk for coronary artery disease (CAD) among diabetic subjects is greater by a factor of 2 to 4 compared to nondiabetic subjects [3].

Hyperglycemia, a hallmark of diabetic condition depletes natural antioxidants and facilitates the production of reactive oxygen species (ROS) which has the ability to react with all biological molecules like lipids, proteins, carbohydrates, DNA etc and exert cytotoxic effects on cellular components [4]. Thus, an increased ROS and impaired antioxidant defense contribute for the initiation and progression of micro and macro vascular complications in diabetics [5].

Serum Paraoxonase (PON) synthesized in the liver is a HDL associated enzyme that prevents oxidative modification of low-density lipoprotein (LDL). Serum PON is responsible for the antioxidant activity of high density lipoprotein (HDL) [6]. Hence, a systemic approach has been made in the present study to focus on the cardiovascular risk factors in cases with NIDDM patients.

Malondialdehyde (MDA), which is widely used as an index of oxidative damage, has received particular attention in pharmacological studies for its ability to interact with lipoproteins. These modified lipoproteins are taken up by macrophages, which are transformed into foam cells that contribute to atherosclerotic plaque development and progression of atherogenesis [7].

The study was casecontrolled in design. We have selected the patients as they are presented. Consecutive 100 NIDDM patients who either admitted to the medicine unit or attending the outpatient department of medicine of M.Y. Hospital recruited from March 2005 to Feb 2006 were included in the study.

In our study, diabetes mellitus was diagnosed on the basis of fasting blood glucose concentrations of =126 mg/dl or a patient already on antidiabetic medications. Smoking was defined as regular smoking of cigarettes/beedies (a local type of tobacco). Systemic hypertension was considered to be present if the patient was taking antihypertensive treatment at the time of hospital admission or if blood pressure was recorded = 140 mm Hg systolic and/or = 90 mm Hg diastolic, at least twice on examination during admission. Those patients whose body mass index [BMI] =25 kg/m2 were considered as obesities. A positive family history of diabetes was defined as first degree relatives that had documented diabetes.

100 healthy subjects, who either attended a routine health check at a general medicine including medical and paramedical staff with no family history of NIDDM were selected for the study. The name, age, sex, occupation and clinical history were noted. All the subjects, after obtaining their consent and the information pertaining to age, sex, habits and health status was recorded. The study was carried out in M.Y.Hospital attached to M.G.M. Medical College, Indore, India. Fasting blood samples were collected from both controls and patients for a series of laboratory investigations using standard protocols. The study has the approval of the institutional ethical committee, for biomedical research.

Estimation of plasma MDA levels was carried out by the method of Gavino et al [9]. MDA is formed as an end product of lipid peroxidation, which reacts with Thiobarbuturic acid (TBA) to form a faint pink colored product. 0.5 ml of plasma was made up to 1 ml with saline and an equal volume of trichloroacetic acid (TCA) was added and incubated at 370°C for 20 min, and centrifuged at 500 g. to 1 ml of TCA extract 0.25 ml of TBA was added and heated in a water bath at 95ºC for 1 hour till a faint pick color appeared. After cooling the color was extracted in 1 ml butanol and the intensity was read at 532 nm using ELICO spectrophotometer. 1,1,3,3 tetra ethoxypropane (1-100 n mol/ml) was used as the standard.

PON activity was measured by using 5.5 mM/L pnitrophenyl acetate (Sigma Chemicals, US) as a substrate; the increase in the absorbance of pnitrophenol formed at 412 nm was measured by using ELICO spectrophotometer [10]. The activity of PON was measured in 20 mM/L Tris buffer at pH 8.0 and which contains 1mM CaCl2 (11mg of CaCl2 dissolved in 100ml of buffer). The generated product p-nitrophenol was calculated by using molar extinction coefficient of 17000 per mole per cm at pH 8.0. Results are expressed as units per milliliter (1U, 1 nmol p-nitrophenol formed per minute).

The data was analyzed by SPSS statistical software (version 12, USA). To test the significance’s between the study group and the control group groups were analyzed by a ’χ2’ test and student ‘t’ test. For multivariate logistic regression analysis, all risk factors are used for differentiating the presence or absence of the disease.

In our study, NIDDM patients belonged to the age group of 30-60 years. Among 100 diabetics, 70 patients were males and 30 were females as shown in Table 1. Out of 70 NIDDM males, 75% were smokers (p=<0.001) and 19% were alcoholics (p=0.11) and all the females both in patients and controls were non smokers and non alcoholics. Among 100 controls, 64 were males and 36 were females. There are 52 patients are obesities and only 19 subjects among controls were obesities and they are statistically (p=<0.001) significant. The mean±SD of duration of NIDDM among patients was found to be 8.5±3.2 yrs. Among 100 diabetic patients, 58% had the history of hypertension and 26% in control group which was statistically (p=<0.001) significant with the diabetes. Positive family history of diabetes was found to be 48% in patients and 12% in controls and which was statistically (p=<0.001) significant. 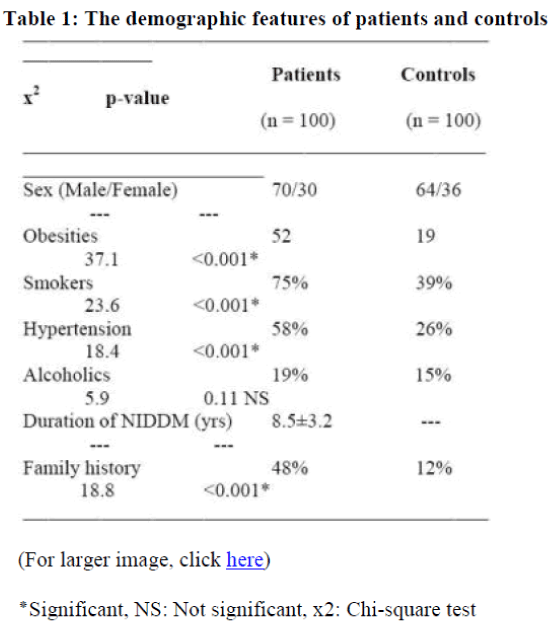 Table 1: The demographic features of patients and controls.

Table 2 shows the serum lipid profile, MDA and PON activity status in patients as well as controls. Mean age of the control subjects and diabetic patients was found to be 41.8±7.2 years and 40.9±9.4 years respectively. However, age was statistically not significant (t=4.5, p=0.21). The mean ±SD levels of the cholesterol in NIDDM patients 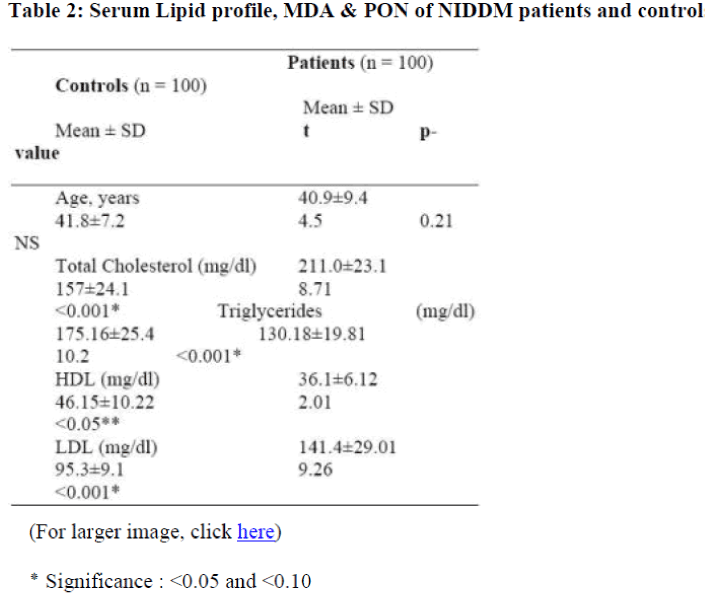 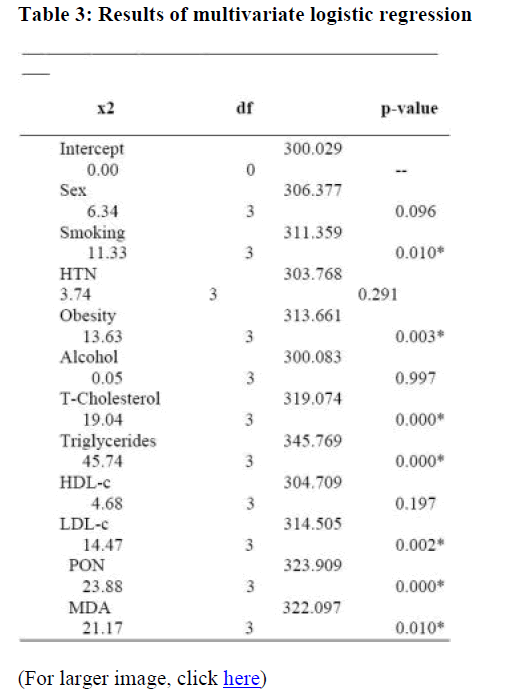 Indians being more susceptible to the occurrence of CAD. The diabetic condition contributes for initiation and progression of micro and macro vascular complications [5]. Amongst, cardiovascular complications are the leading cause of mortality and morbidity in diabetics. Very recently, Alejandro et al. reported a low PON activity may contribute to the increased atherosclerosis found in NIDDM patients by reducing the ability of HDL to retard LDL oxidation [11]. We previously showed that the PON activity is lower in NIDDM patients who suffering from CAD [12]. Similarly, in this study, NIDDM patients had low PON activity compared to control group. Framingham study demonstrated a direct association between diabetes and heart failure [13]. CAD occurs due to a number of factors in diabetics; both insulin resistance and elevated lipid levels, common in diabetes primarily triggers atherogenic injury. It is also suggested that endothelium in diabetic arteries is more prone to atherogenic injury due to decreased production of endothelial nitric oxide, known to be antiatherogenic, and increased production of plasminogen activator inhibitor [12].

Tobacco smoking is one of the most powerful modifiable risk factor for the development of CAD in NIDDM patients. Our data showed that prevalence of smoking was significantly higher in NIDDM patients as compared to controls. Pias et al [14], shown it to be important risk factor with a dose related risk in Indian patients. Smoking cessation may thus prove to be one of the most cost effective approaches in both primary and secondary prevention. Like other studies [15-17], in our study, family history, hypertension and obesity was found to be significantly high in the diabetic patients.

MDA is a natural product of lipid peroxidation and reflects the oxidant status of the biological systems. It has been demonstrated that high MDA levels are associated with high oxidative stress in diabetes mellitus and CAD [18]. CAD is associated with an imbalance between oxidant levels and cellular antioxidant defense mechanism. Enhanced oxidative stress may facilitate the development of CAD. MDA has been suggested to be used as a marker of extent and severity of CAD [19]. The involvement of lipid peroxidation in CAD was confirmed by the significantly higher concentrations of MDA observed in our diabetic patients compared with the controls. Therefore, oxidative stress may impair insulin action. Reduced serum PON activity may contribute to insulin resistance. This hypothesis is supported by the finding of reduced serum PON activity in insulin resistant disorders such as NIDDM and CAD [6]. Significantly lower PON activities have been reported after myocardial infarction when compared with age and gender matched controls. Decreased serum activity has been reported with other states associated with increased atherosclerosis, including diabetes, hypercholesterolemia and renal diseases [20]. Therefore, PON activity may reflect the antioxidant and antiatherogenic capacity [21].