The present work reports the synthesis of some enaminone derivatives bearing the biologically active 3,4-dimethoxyphenyl (3) or 3,4,5-trimethoxyphenyl moieties (5 and 7), respectively. The trimethoxybenzene moiety has been previously reported to confer cytotoxic activity. However, we found that, at high micromolar concentrations, the new compounds have the ability to weak-ly induce the cytoprotective enzyme NQO1. This is most likely due to their electrophilic cyclo-hexenone functionality, a well-established structural feature of NQO1 inducers. The structure of the newly synthesized compounds was confirmed on the basis of elemental analyses, IR, 1H-NMR, 13C-NMR spectra.

Enaminones are a group of organic compounds carrying the conjugated system N- C= C- C= O. The literature has reported information about the chemistry of enaminones, their physicochemical properties and biological activities [1-4]. In addition, cyclohex-2-enone has a wide range of biological activities such as anticancer [5] and antimicrobi-al activities [6]. On the other hand, enaminones have been extensively used as key intermediates in organic synthesis [7-12] and the chemistry of these compounds has been re-viewed [13]. In particular they have been employed as synthons of a wide variety of biologically active heterocy-clic compounds [14], as pharmaceutical agents with anti-cancer [15], antibacterial [16], anti-inflammatory [17] and other therapeutic activities [18-20]. During the past decade we have been involved in a program aimed at exploring the potential of enaminone as building blocks for heteroaro-matics [21], and have successfully synthesized quinoline derivatives7-12 utilizing enaminones as starting materials. Based on the above information and as a continuation of previous work on anticancer agents [22-27], we report the synthesis of some new enaminone derivatives. 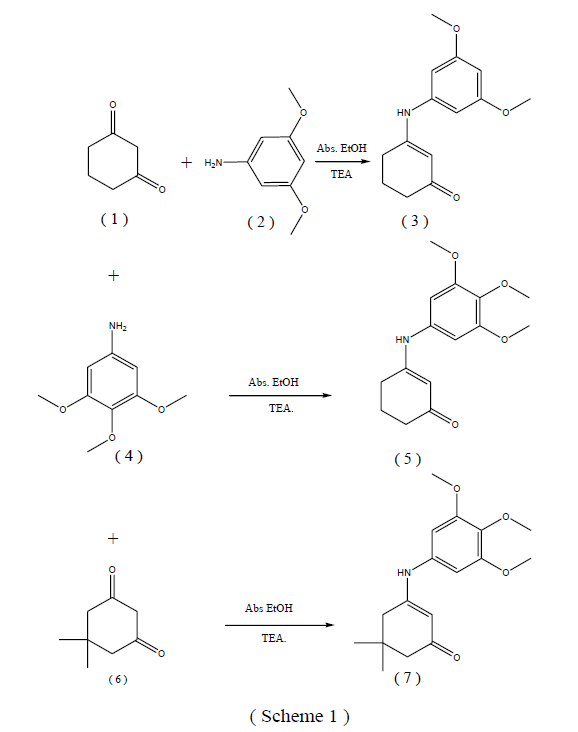 Hepa1c1c7 cells (104 per well) were grown in 96-well plates for 24 h. After that, the cell culture medium was replaced with fresh medium containing serial dilutions of enaminones. Cells were grown for a further 48h, and lysed with digitonin. The specific activity of NQO1 was determined in cell lysates using menadione as a substrate. Mean values for 8 replicate wells are shown for each data point. The standard deviation in each case was <5% of the value.

The NQO1 inducer activity was determined using a quantitative microtiter plate assay [28]. Hepa1c1c7 cells were grown in αMEM supplemented with 10% (v/v) fetal bovine serum that had been heat- and charcoal-inactivated. Cells were routinely maintained in a humidified atmosphere at 37 °C, 5% CO2. For each experiment, cells (104 per well) were plated in 96-well plates. After 24 h, the cell culture medium was replaced with fresh medium containing enaminones, and the cells were grown for a further 48 h. Eight replicates of 8 serial dilutions of each compound were used. Compounds were prepared as stock solutions in DMSO, and then diluted in the cell culture medium 1:1000. The final concentration of DMSO in the medium was maintained at 0.1% (v/v). At the end of the 48 h exposure period, cells were lysed for 30 min at 25 °C in digitonin (0.8 g/L, pH 7.8). The specific activity of NQO1 was evaluated in cell lysates using menadione as a substrate. Protein concentrations were determined in each well by the BCA protein assay (Thermo Scientific). Sulforaphane, a classical NQO1 inducer, served as a positive control.

Based on the electrophilicity of the cyclohexenone func-tionality, we tested the possibility that enaminones may be able to induce the cytoprotective enzyme NAD(P)H:quinone oxidoreductase 1 (NQO1). Indeed, the cyclopentenone prostaglandins are well-known endoge-nous activators of nuclear factor-erythroid 2 p45-related factor 2 (Nrf2), the main transcription factor which regu-lates the basal and inducible expression of NQO1 [29-32]. Using a quantitative bioassay in murine Hepa1c1c7 cells [28,33], we found that all three enaminones are weak in-ducers of NQO1 (Table 1 and Figure 1). Exposure of the cells to the enaminones for 48 h led to a dose-dependent upregulation of the specific activity of NQO1. The magni-tude of induction among the three compounds was simi-lar, with compound 3 being the most potent, and com-pound 5 being the least potent inducer. No cytotoxicity was observed at any of the tested concentrations of the enaminones. 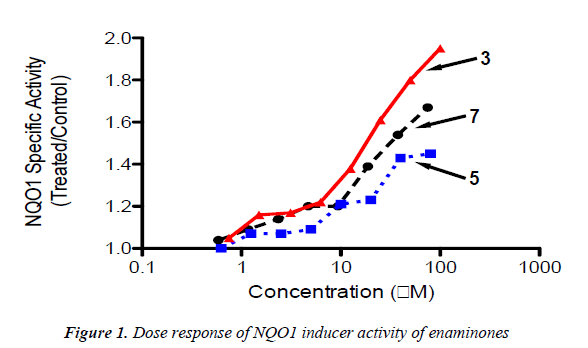 The 3,4,5-trimethoxyphenyl moiety is an important struc-tural feature for binding to tubulin and inhibition of mi-crotubule polymerization, and is also present in the struc-ture of colchicine [34]. In contrast, the similarity in in-ducer potency among the three enaminones indicates that the 3,4,5-trimethoxy substitution does not play a signifi-cant role for NQO1 induction as compound 3 lacks one of the methoxyl groups. This result points out to the im-portance of the cyclohexenone functionality, a feature shared by all three compounds. The electrophilic enone functionality was early recognized as a critical feature within a structurally diverse array of inducers of NQO1, due to the ability of enones to form Michael adducts with sulfhydryl groups [35]. By analogy with other NQO1 in-ducers bearing enone groups, such as phenylpropenoids, chalcones, curcuminoids and coumarins [36-38], we pro-pose that the enaminones activate transcription factor Nrf2 by reacting with cysteine sensors of its major nega-tive regulator, the ubiquitin ligase substrate adaptor Kelch-like ECH-associated protein 1 (Keap1). Under ho-meostatic conditions, Keap1 continuously targets Nrf2 for ubiquitination and proteasomal degradation [39-42]. Cys-teine modification of Keap1 leads to a loss of its repressor function, ultimately resulting in Nrf2 stabilization, nucle-ar translocation, and activation of its target genes, such as NQO1.

The authors would like to extend their sincere apprecia-tion to the Deanship of Scientific Research at King Saud University for funding of this research through the Re-search Group Project no. RGP-VPP-262. We are also grateful to Cancer Research UK (C20953/A10270) for financial support.