Marginatoxin, an aryltetraline lactone lignan isolated from Bupleurum marginatum Wall. ex DC (Apiaceae), showed cytotoxic activity against human hepatocellular carcinoma. However, the cytotoxic mechanisms of marginatoxin against cancer cells remained unclear. This study was designed to investigate the detailed mechanism of its cytotoxic effect on human hepatoma BEL-7402 cells by CCK-8, flow cytometry, western blot and xenograft assays. Marginatoxin caused a dose-dependent growth inhibition of BEL-7402 cells with an IC50 of 15.20 μg/ml. Marginatoxin induced BEL-7402 cells apoptosis identified by annexing V/propidium iodide staining kits with the aid of flow cytometry. Marginatoxin-induced apoptosis was characterized by increasing Fas, FasL and Fas associated protein with death domain expression, and cleavage of caspase-8, caspase-10, caspase-3. Furthermore, the results of xenograft assay suggested that marginatoxin inhibited the BEL-7402 cells-induced tumor growth without effect on body weight of nude mice in vivo by regulating the expression levels of above apoptotic proteins. These results demonstrated that marginatoxin could induce apoptosis of human hepatoma BEL-7402 cells in vitro and in vivo through activation of Fas/FasL-mediated apoptotic pathway. All these findings demonstrated that marginatoxin may be a promising chemopreventive agent for treating hepatocellular carcinoma. Moreover, there is a need to further investigate marginatoxin in this regard.

Liver cancer is the second biggest cause of mortality in the globe [1]. Hepatocellular carcinoma (HCC) occupies up to 90% of all primary liver cancers worldwide [2], and is also one of the four most prevalent malignant diseases in China, Korea, and sub-Africa [3,4]. Surgical treatments, such as liver resection and liver transplantation, are the first-line therapeutic protocols for HCC patients [5]. Reports say that such curative treatment can extend median survival times around 60 months, and patients are prone to show disease recurrence after surgical treatments, and therefore, the postoperative survival rate is not quite promising [6]. Unfortunately, most HCC patient are often diagnosed at a late stage when surgical treatments are least effective, and however chemotherapy has an unique advantage in the treatment of patients with late-stage HCC [7,8]. Due to the development of drug resistance in the treatment of HCC, it is necessary to develop novel chemotherapy drugs for the treatment of HCC. In the past decades, traditional Chinese medicine and their active ingredients have attracted much attention as candidates for the treatment of HCC [9].

B. marginatum were purchased from Chengdu Hehuachi Chinese Herbal Medicine Market (Chengdu, China) in 2014 and identified by Yi Gao. A voucher specimen (no. ZJHSMU2014058) was stored in Zhujiang Hospital, Southern Medical University for future reference.

Marginatoxin (Figure 1) was obtained from the air dried aerial parts of B. marginatum through extraction with methanol, chromatography on a silica gel column and recrystallization in n-hexane: ethyl acetate mixture. Marginatoxin was identified by Nuclear Magnetic Resonance (NMR) and Mass Spectrum (MS), and the NMR and MS data corresponded with those in the literatures [12,13]. 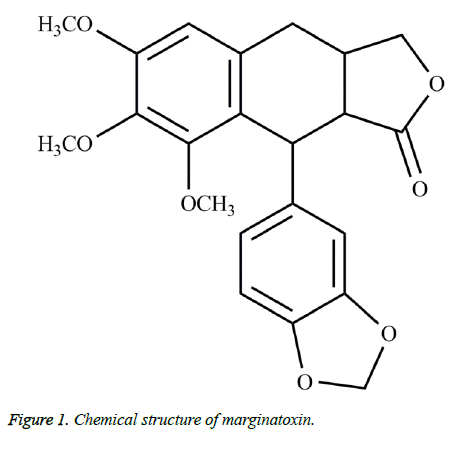 The HCC cell line BEL-7402 was purchased from American Type Culture Collection (ATCC, Manassas, VA, USA). BEL-7402 cells were cultured in DMEM supplemented with 10% FBS, 100 U/ml of penicillin and 100 μg/ml of streptomycin in a humidified atmosphere containing 5% CO2 in air at 37ºC.

CCK-8 assay was conducted to evaluate the effect of marginatoxin on the proliferation of BEL-7402 cells. In brief, cells were seeded on 96-well plates. After incubation for 4 h, BEL-7402 cells were treated with marginatoxin at the doses of 0, 2, 5, 10, 15, 20, 25 and 30 μg/ml for 48 h, and the group treated with 0 μg/ml marginatoxin was regarded as the control group. Then CCK-8 solution was added into every well, followed by incubation for 4 h. The optical densities (OD) were determined at 450 nm using Bio-Rad Model 680 microplate reader (Hercules, CA, USA). The cytotoxic effect of marginatoxin on BEL-7402 cells was evaluated by the inhibition rate, calculated as in Equation 1.

According to the manufacturer’s instructions, cells undergoing apoptosis were identified by an annexin V-FITC and PI staining kits. During the induction of apoptosis, phosphatidylserine, which is normally located in the inner leaflet of cell membranes [14], is exposed on the cell surface. Then annexin V binds to phosphatidylserine and can be used to distinguish the earliest stages of apoptosis. PI, which cannot enter cells with intact membranes, is used to tell late apoptotic cells from early apoptotic cells [15]. After treatment with marginatoxin (0, 5, 10 and 20 μg/ml) for 48 h, BEL-7402 cells were harvested, washed with Phosphate-Buffered Saline (PBS) solution, and then resuspended in ice-cold binding buffer. Annexin V-FITC and PI solutions were added and then incubated for 30 min in the dark. Stained cells were analyzed by flow cytometry.

After treated with marginatoxin (0, 5, 10 and 20 μg/ml) for 48 h, cells were washed thrice with cold PBS and lysed in lysis buffer. The above lysates were centrifuged at 12000 rpm for 5 min at 4ºC to obtain total protein, and then the total protein concentrations were determined by the enhanced BCA protein assay kit. About 40 μg of total proteins were resolved by 12% SDS-PAGE, followed by transferring to the PVDF membrane. After the membrane was blocked in Tris-buffered saline plus Tween 20 (TBS-T) containing 5% fat-free milk, the membrane was incubated with a selected primary antibody and then with HRP-conjugated goat anti-rabbit antibody. Immunoreactive proteins were detected by chemiluminescence.

Sixteen nude mice (5-6 weeks old, 20 ± 2 g) were obtained from SLRC Laboratory Animal Company (Shanghai, China) and were used for in vivo studies. The mice were housed and well maintained. All animal treatments were strictly consistent with international ethical guidelines and national institutes of health guide concerning the care and use of laboratory animals [16]. Mice received food and water ad libitum.

Nude mice were randomly assigned into either control or marginatoxin group. BEL-7402 cells suspension (2 × 106 cells/ nude mouse) was subcutaneously injected in the right flank of each mouse. When the BEL-7402 cells-induced tumor grew to appropriate diameter (2-3 mm), the nude mice in the control and marginatoxin group were orally administrated with 0.5% DMSO and 40 mg/kg marginatoxin once a day for 20 days, respectively. Tumor dimensions (width and length) and body weights of nude mice were measured on days 5, 10, 15 and 20 using vernier caliper and electronic balance. Then, the mice of 40 mg/kg marginatoxin group were euthanized, and their tumor tissues were collected for western blot. The tumor volume was calculated as in Equation 2.

All experiments were done in triplicate and the data are expressed as mean ± standard deviation. Differences among different groups were analyzed by one-way analysis of variance (ANOVA) with the aid of SPSS 21.0 software. Difference was considered as statistically significant at P<0.05. 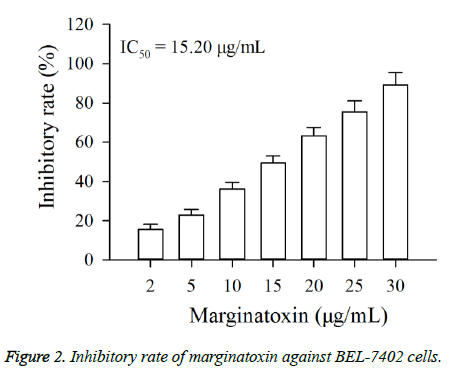 Induction of apoptosis by marginatoxin on BEL-7402 cells 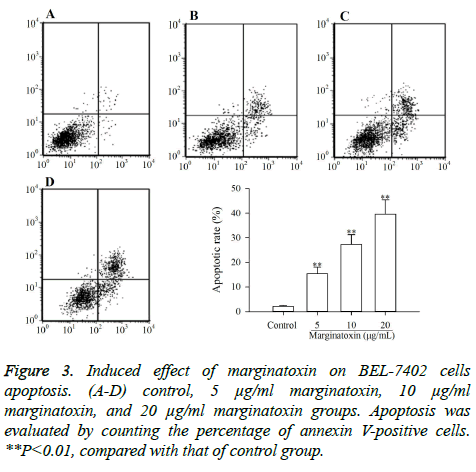 Marginatoxin induces activation of caspase-8, -10, and -3, and up-regulation of Fas, FasL and FADD 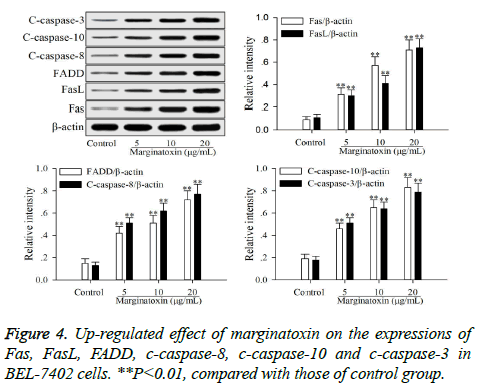 Xenograft assays was established to study the anti-tumor activity of marginatoxin on BEL-7402 cells-induced tumor in vivo. As shown in Figure 5, after administration of marginatoxin at 40 mg/kg for 20 days, the tumor volumes were significantly (P<0.01) decreased, compared with that of control group, and the body weight of nude mice was not affected by the administration of marginatoxin. As depicted in Figure 6, the western blot was conducted to investigate the mechanism of apoptotic pathway. The pro-apoptotic proteins (Fas, FasL, FADD, c-caspase-8 and c-caspase-10) and the executioner caspase (c-caspase-3) in the 40 mg/kg of marginatoxin group were significantly (P<0.01) increased, compared with those of control group. 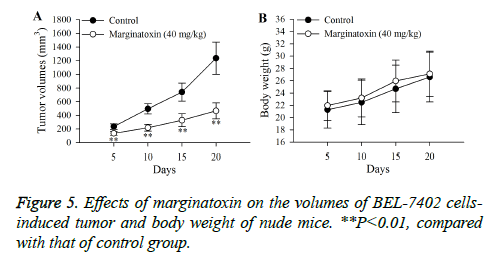 Figure 5. Effects of marginatoxin on the volumes of BEL-7402 cellsinduced tumor and body weight of nude mice. **P<0.01, compared with that of control group. 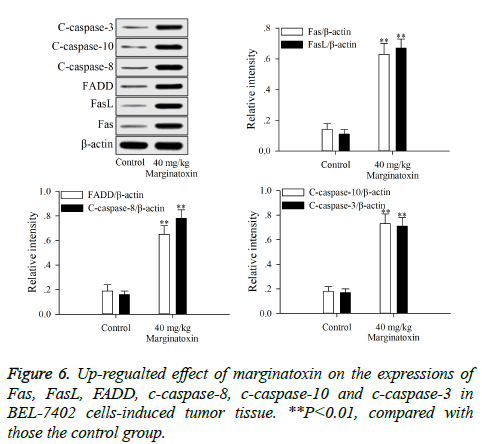 The present study demonstrates that marginatoxin, can not only induce the apoptosis of human hepatoma BEL-7402 cells in vitro, but also inhibit the BEL-7402 cells-induced tumor growth of nude mice in vivo. The mechanism of this action was related to the activation of the Fas/FasL-mediated pathway. The CCK-8 assay is used to verify the anti-proliferation effect of anticancer agents, and the flow cytometery is used to investigate whether the anti-proliferation effect is related to apoptosis and can also tell the percentage of apoptotic cells [17,18]. In this study, the results of CCK-8 assay indicated that marginatoxin showed significantly cytotoxic activity against BEL-7402 cells (Figure 2). Further, the results of flow cytometery showed that the cytotoxic activity was related to apoptosis and the percentage of apoptotic cells was increased with the increase of the marginatoxin dose (Figure 3).

Stimulation of Fas has been exhibited highly effective in the inhibition of tumor cells [19]. At the cell surface, Fas receptor binding to its ligand FasL induces receptor oligomerization and the formation of the death signaling complex, which contains the adaptor protein FADD [20]. The N terminal of FADD forms the death effector domain (DED), and the DED-DED inter-action leads to the auto-cleavage and activation of caspase-8 and -10 [21,22]. A large amount of active caspase-8 and -10 in turn activates downstream caspase-3, causing apoptosis [23]. The present study showed that the protein expressions of Fas, FasL and FADD were up-regulated, and caspase-8 and -10, -3 were activated with marginatoxin treatment (Figure 4). These results suggest that a Fas/FasLmediated apoptotic pathway might play a critical role in marginatoxin-induced apoptosis in BEL -7402 cells.

Xenograft, an accepted model, is used to study the effects of anticancer agents on the cancer cells-induced tumor and possible mechanisms in vivo [24,25]. The results of xenograft assay (Figures 5 and 6) indicated that maginatoxin significantly inhibited the growth of BEL-7402 cells-induced tumor without effect on the body weight of nude mouse. The mechanism of this inhibitory effect was investigated by western blot. The results of western blot showed that the mechanism of this action was related to the activation of the Fas/FasL-mediated apoptotic pathway. The protein expressions of Fas, FasL and FADD were up-regulated, and the caspase-8 and -10, -3 were activated with maginatoxin treatment. These results suggest that a Fas/FasL-mediated apoptotic pathway might play a critical role in marginatoxin-induced apoptosis in BEL-7402 cells-induced tumor in vivo.

In the study, we concluded that the molecular mechanism during marginatoxin-mediated growth inhibition of human hepatoma BEL-7402 cells was related to induction of apoptosis and initiation of Fas/FasL-mediated apoptotic pathway. Furthermore, the in vivo assay suggested that maginatoxin could significantly inhibit the growth of BEL-7402 cellsinduced tumor without effect on the body weight of nude mouse by activating Fas/FasL-mediated apoptotic pathway. All these findings demonstrated that marginatoxin may be a promising chemopreventive agent for treating HCC. Moreover, there is a need to further investigate marginatoxin in this regard.