Knowledge and attitudes towards digital radiography and CBCT among orthodontists.

The aim of this study was to evaluate knowledge of and attitudes towards digital radiography and Cone Beam Computed Tomography (CBCT) among orthodontists. A questionnaire with 24 questions was emailed to orthodontists practising in Turkey. The questionnaire comprised sections pertaining to demographic characteristics and clinical specialties, attitudes towards digital imaging, and knowledge of CBCT. Data from 366 questionnaires were analysed. The mean age of responders was 35 years (range: 24-68 years); 294 orthodontists (87.5%) preferred digital radiography for all procedures, with 49.4% reporting that they had learned about CBCT from seminars. A total of 206 respondents (56.3%) used CBCT during orthodontic diagnosis. The most frequently cited indication for CBCT was determination of impacted teeth and other oral abnormalities (80.9%), followed by cleft lip and palate (57.4%); 196 orthodontists (53.6%) believed that CBCT lectures should be included in the clinical phase of dental education, with 282 (77%) indicating a willingness to learn more about CBCT. Our data indicate that digital radiography is widely used by orthodontists; the preference for CBCT for evaluation of oral and craniofacial anomalies will likely increase commensurate with greater technical competence.

Extra-oral radiographs are invaluable diagnostic tools in orthodontic treatment [1,2]; lateral cephalometric radiographs can provide information on the structural relationships between bones, teeth, and airways [1]. Most practitioners favour the use of digital radiographic techniques [3], which are being timeeffective, use low doses of radiation, eliminate the requirement for chemicals and development processes, and facilitate straightforward data storage and ease of communication with colleagues (given their widespread use).

Disadvantages include the high equipment costs and provision of a two-, rather than three-, dimensional (3D) view [4,5]. 3D views can be obtained using computed tomography (CT). In the field of dentistry, CT scanners have typically not been used because of concerns regarding radiation dose and cost [6]. By the early 2000s, commercially available cone beam CT (CBCT) had become popular for the visualization of oral and maxillofacial regions [7,8]. CBCT has several advantages over conventional CT, including reduced cost and space requirements, a more rapid scan time, and reduced beam application time to the head and neck [1,9-13].

A questionnaire with 24 questions was emailed to a total of 705 orthodontists and dental students undertaking postgraduate orthodontic programs who were members of the Turkish Orthodontics Society (TOD). Each email was provided with a letter of presentation of the aim of the study. Over a 3-month period, two e-mail reminders were sent. 366 questionnaires were returned which means an overall response rate 51.9%. The questionnaire was divided into the following three sections (Figure 1) 1) demographic characteristics and clinical specialities (questions 1-4); 2) attitudes towards digital imaging (questions 5-10); and 3) knowledge of CBCT (questions 11-24). 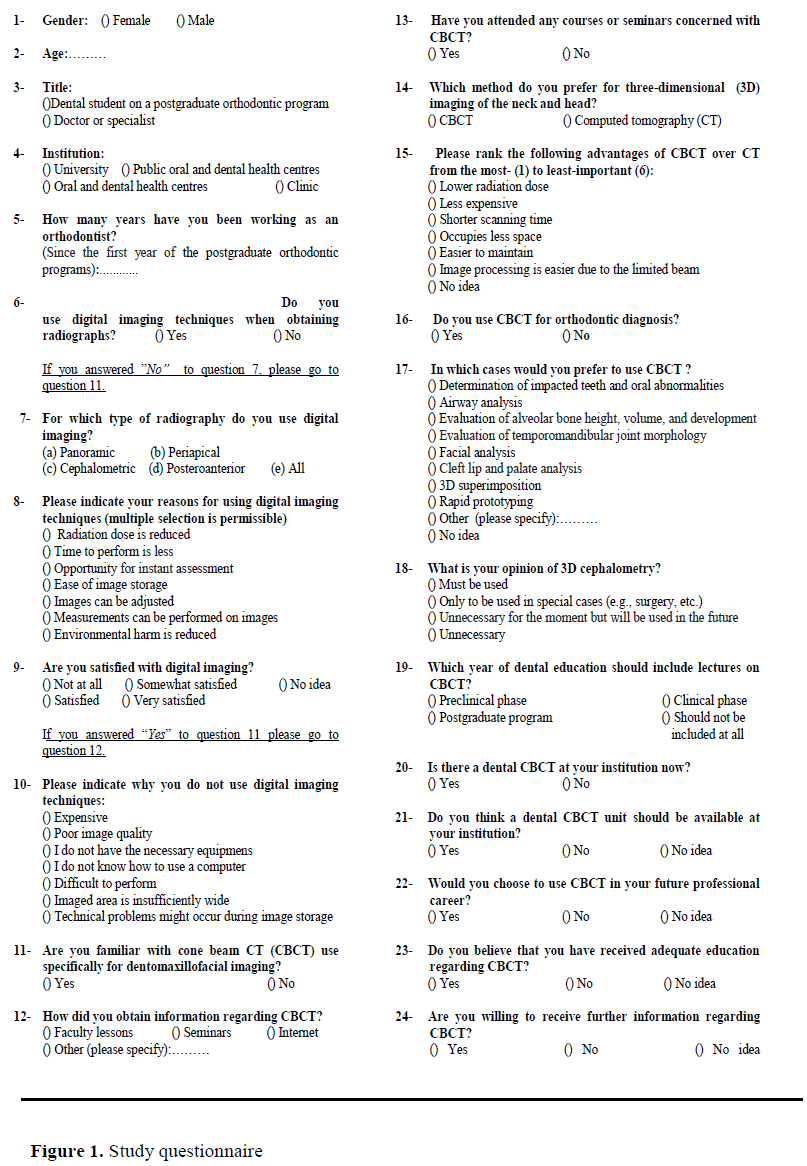 A high proportion (66.7%, n=224) of respondents were satisfied with currently available digital imaging techniques;A total of 49.4% of respondents indicated that they had learnt of CBCT from attending seminars; 310 respondents (85.6%) preferred CBCT to CT when 3D-imaging of the neck and head was required, and 206 (56.3%) used CBCT for orthodontic diagnosis. The most frequently cited advantage of CBCT over CT was lower radiation dose (83%), followed by shorter scanning time (48.4%; Table 2); 110 orthodontists (30.05%) reported that they were unaware of the advantages conferred by CBCT vs. CT. The most frequently cited indication for CBCT was to explore impacted teeth and other oral abnormalities (80.9%), followed by cleft lip and palate (57.4%; Table 3).

Table 2: Advantages of CBCT vs. CT cited by respondents.

Table 3: Specific clinical cases for which CBCT is used.

Table 6: Digital radiography preference and attitudes towards CBCT according to institution. Clinics

A significant association was observed between willingness to acquire further knowledge on CBCT and job title (p=0.027; Table 7). The median tenure of orthodontists who attended CBCT-related courses was 6 years (interquartile range [IQR]=8 years) compared with 10 years (IQR=11) for those not attending CBCT-related courses. There were significant associations between CBCT course attendance history, years of dental education, and attitudes towards CBCT (p<0.05 and p<0.001, respectively; Table 8).

Table 7: Respondents attitudes towards CBCT according to job title.

Table 8: CBCT course attendance history and respondents? attitudes towards CBCT according to length of tenure.

In the present study, a significant difference (p<0.05) was observed between the prevalence of digital and non-digital radiography use according to type of institute; a similar result was reported by Dolekoglu et al. [4]. The highest rate of digital radiography use occurred in universities (among academics and postgraduate students). A high proportion (87.5%) of our sample preferred digital radiography for all types of analysis (panoramic, periapical, cephalometric, and posteroanterior). A higher proportion of respondents situated within academic institutions (90%) reported using all types of digital radiographic techniques compared with oral dental health centres (82.8%) and clinicians (75%). In previous studies on dentist populations, periapical radiography was the mostpreferred technique [5,6]; this was not the case in the present study, but our sample was comprised of orthodontists.

The major disadvantages of digital radiography include reduced spatial resolution, and limited sensor size and flexibility [19,20], although 66.7% of our sample indicated satisfaction with the currently available techniques, a similar proportion to that reported by Reddy et al. [6]. Non-availability and cost of equipment were the major reasons cited for non-use of digital techniques, in accord with previous studies [4-6,18]. In our study, respondents with knowledge of CBCT preferred CBCT to conventional CT when 3D imaging of the head and neck region was required, primarily because of the lower associated radiation dose. The most frequently cited indication for CBCT was detection of oral and craniofacial anomalies such as impacted teeth (80.9%) and cleft lip and palate (57.4%). No respondent indicated routine usage of CBCT, suggesting that orthodontists tend to adhere to the ‘as low as reasonably achievable’ principle. Because we sampled orthodontists and not dentists, the main reasons cited for CBCT referrals differed from previous studies (i.e., dental implant planning, pathology, and TMJ analysis) [4,6,13,21]. CBCT is recommended as a low-cost dose-sparing technique compared with CT, though CBCT has slightly more radiation exposure than routine panoramic radiography for dentomaxillofacial imaging. All potential benefits of CBCT imaging must be weighed against potential risks [22,23].

Approximately half (49.4%) of our sample indicated that they had learnt of CBCT from seminars; several respondents graduated before CBCT came into existence approximately 15 years ago (which may explain this result), which also accords with previous studies of dentists and dental students [6,21]. The majority of our respondents (53.6%) indicated that CBCT lectures should be included during the clinical phase of dental education; if the radiation dose associated with CBCT continues to decrease, it is likely that CBCT use will commensurately increase [4,6,21]. Respondents suggested that their knowledge of CBCT was defective because familiarity with the technique is not considered a necessity for orthodontists, in contrast to oral and maxillofacial radiologists; collaboration between orthodontists and oral radiologists during formulation of treatment plans may therefore be advantageous. The majority of our university-based respondents (90.4%) indicated that a CBCT unit is necessary in their institution, compared with 40% of clinicians and only 18.4% of oral and dental health centre orthodontists. This may be because communication with oral radiologists is easier in a university setting, and universities are typically centers of ‘leading-edge’ technology.

Post-graduate student demand for CBCT was higher compared to that of active practitioners working for>10 years, with the requirement for 3D information and attendance at more CBCT seminars representing the reasons cited. Technical incompetence was among the reasons cited for non-use of CBCT [4,6]. One limitation of our investigation was response rate. The response rate of the present report was not so high (51.9%). In fact, similar studies presented the same problem. However, a random sample should be representative of the community surveyed. Our data indicate that digital radiography use is prevalent among orthodontists. Also, knowledge of CBCT and awareness of radiation safety have reached higher levels. The main reason cited for use of CBCT was the reduced radiation dose compared with conventional CT. CBCT use is higher at universities because of their status as ‘leading edge’ technological institutions. This high-quality imaging technology should be adopted by orthodontists with appropriate CBCT education courses, meetings and seminars.