Purpose: The relationship between EMG and elbow angle was investigated to identify the signal characteristics of upper-limb muscles during isometric contraction. The study would improve the current understanding of electrophysiological activities of the human upper limbs, which would aid the development of prosthetic arms for rehabilitation research.

Subjects and Methods: Ten subjects aged 22.4(±1.5) years participated in this study. The electromyography signals from the biceps brachii muscle were recorded during isometric contraction. The root mean square and mean absolute value of the EMG signals were calculated and evaluated to assess the relationship between the signals and elbow angles. In addition, the force exerted by the upper limb was recorded using a dynamometer to identify more features of the relationship.

The movement of the upper limb is essential for basic human activities, such as lifting an object, typing, writing and throwing. These activities essentially involve motion and muscle action. Using electromyography (EMG) signals, muscle actions can be assessed through an analysis of the electrical signals generated by the muscles. The electrical signal generated by upper-limb muscles can be influenced by various external issues, such as muscle contraction, relaxation, elbow joint angle and muscle force. During isometric contractions, the elbow angle is considered one of the factors of the maximum force generated by muscles in the upper limb. A study of the EMG-angle relationship may provide insights into the activity of muscles at different elbow joint angles, which may be particularly helpful for rehabilitation studies.

Several studies have investigated the relationships of upper limb muscles with EMG signals. For example, Doheny et al. investigated the EMG-force relationship of the triceps and biceps muscles during elbow extension and flexion [1]. These authors claim that the EMG-force relationship does not vary markedly between a few selected muscles of the upper limb. The EMG-moment and EMG-pennation angle of the tibialis anterior and triceps muscles of healthy subjects were studied by Roberts and Buchanan [2], and their results indicate a moderate relationship for both the EMG-moment and the EMG-pennation angle. The EMG-torque relationship was investigated by Bouchard et al. [3]: the elbow angle was not specified, and four muscles in the biceps and four muscles in the triceps were investigated. A relationship between SEMG and elbow joint angle was proposed by Wu et al. [4]. Ahamed et al. examined the EMG-time relationship of the biceps brachii muscles during isometric and isotonic contractions [5]. Four different upper-limb motion angles were investigated by Goupura et al., who discovered a relationship between the muscle activities related to daily upper-limb motions [6].

Roman and Tokarski investigated the variation in the force at different locations of the forearm muscles during isometric contraction [7]. In addition to the above-mentioned studies, several investigations studied the EMG-angle relationship in the hamstring muscles and knee joint [8–10] and found significant relationships among the EMG signal, muscle activity and knee angle. However, the lower-limb muscles are different from those in the upper limb in terms of both structure and activity.

Most previous studies [1–3,5,6] investigated the biceps and triceps muscles. In addition to these two muscles, one study investigated the anconeus and brachioradialis muscles [4], and two studies considered the regular activity performed by subjects in either the sitting or standing position [6,7]. Additionally, one study measured the force of elbow flexion and extension while keeping the forearm in a neutral position [1]. Another method involving elbow bending and subsequent stretching of the arm was used by Wu et al. [4]. Earp et al. investigated the EMG signal activity generated with different knee angles to quantify the signal during a wide range of motion [8]. Based on the previous relevant studies, the EMG-elbow angle relationship in upper-limb muscles during isometric contraction has not been widely studied. However, it is important to determine the electrical signal characteristics at different angles to improve prosthetic devices for the elbow joint. In addition, the minimum and maximum angles used in previous studies were 0° and 140°, respectively. However, it is equally important to investigate the EMG-angle relationship at other angles, such as 30°, 60°, 90° and 120°, for the development of prosthetic arms for rehabilitation programmes. Moreover, the age of both the healthy and unhealthy subjects investigated in previous studies ranged from 26 to 30 years. In this study, we investigated subjects less than 25 years of age in healthy physical condition. In addition to the above, it has been found that the Root Mean Square (RMS) feature of EMG together with the Mean Absolute Value (MAV) and Coefficient of Variation (CV) feature has not been given much attention in this type of research yet. In this paper we investigate the RMS feature of the EMG during isometric contraction.

Ten participants aged 22.4 (±1.5) years voluntarily participated in this study and provided written consent prior to the experiment. The participants did not have any history of musculoskeletal pain or injury in their upper limb or muscles. All of the experimental procedures conformed to the principles outlined in the Declaration of Helsinki and were approved by the local Human Research Ethics Committee of the University. In this study, Shimmer’s ExG Module was used to measure the physiological signals for two-channel EMG, and a goniometer was used to measure the elbow joint angle. A dynamometer was used to measure the force generated at each angle. Two silver-chloride (AgCl) surface electrodes were used: one for input, and the other one for reference or ground.

Each subject was requested to sit in a comfortable position with back upright as shown in Figure 1. The EMG electrodes were then placed on the subject’s biceps brachii muscle. Afterward, the subject was asked to carry a dynamometer with the hand where the electrodes were placed. A goniometer was used to measure five different elbow joint angles: 0°, 30°, 60°, 90° and 120°. The subject was asked to hold the dynamometer at the indicated angle and hold it at that position for 50 s. For each subject, EMG signals were recorded from three trials and averaged. A rest time of 3 min was included between each set of two trials. The placement locations of the electrodes on the bicep brachii muscle of the upper limb were selected such that it was possible to determine the EMG variability. An interelectrode distance of approximately 1.5 cm was used to avoid crosstalk signals from neighbouring muscles. 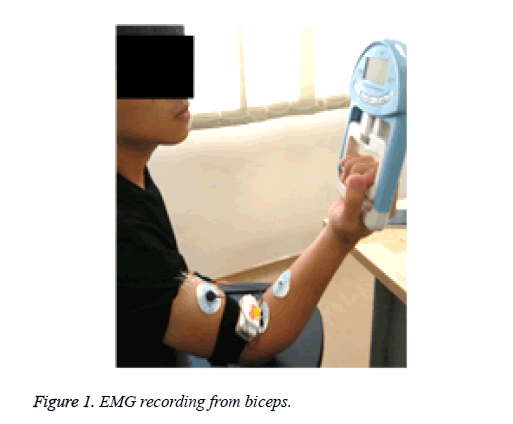 The raw EMG signal (in mV) was recorded at a sampling rate of 2 KHz. A band-pass filter with a bandwidth of 20-500 Hz was used to remove the noise due to skin movement as well as high-frequency noises. The experimental EMG data were processed offline by windowing, filtering, and extracting the signal. Signal processing was performed using MATLAB® software. The normalized EMG signal amplitude was calculated for further analysis of the RMS, standard deviation (SD), linear regression and mean values. In addition, the MAV of the EMG signal was recorded and used to extract features of the EMG signal in the time domain. Specifically, RMS and MAV values for each subject were obtained for three trials with different angles. The force (N) was obtained using a dynamometer at different angles of the elbow joint. The mean, SD, CV of the EMG RMS and MAV values were calculated according to the subject, angle and trial.

Figure 3: Coefficient of variance versus angle (a) RMS (b) MAV.

The relationship between the EMG signal and elbow angle during isometric contraction was investigated. The results revealed no significant relationship between the EMG signal and the elbow angle. On the contrary, a strong relationship was found between the force and the elbow angle. These results indicate that the force decreases with an increase in the elbow angle. A similar result was obtained in a previous study [1], which found a weak relationship between the elbow angle and the EMG signal generated by upper-limb muscles. These findings may imply that EMG activity is dominated by the force more than the angle of the upper limb. This study has a few limitations. The subjects reported that it was difficult to maintain their elbow at particular angle during the EMG recording. The alignment of the angle was adjusted by physical inspection using a goniometer. This procedure might result in angle error at the micro level. A hardware system can be developed to avoid this displacement in the elbow angle. In conclusion, the outcomes of the present research study indicate that the electrical signal generated by a motor unit may not depend on the absolute amount of force at a given elbow angle. The findings of the study can be applied to obtain a more precise understanding of the physiological activity of the upper limb during rehabilitation programmes as well as other studies in the field of biomechanics.

The authors extend their appreciation to the College of Applied Medical Sciences Research Center and the Deanship of Scientific Research at King Saud University for funding this research.