Introducing confusion technique as a novel method of effective teaching of chemistry of lipids to first year dental students.

Confusion technique is a game like teaching tool, which is used to achieve departmental as well as specific learning objectives. The technique helps to solve all the queries with an enjoyment. The purpose of this project was to introduce confusion technique as a novel method of teaching to improve learning experience of the students during lectures. The topic phospholipids were selected for first BDS students. Actual execution of the confusion technique was carried out in the classroom. The data was analyzed by using appropriate statistical test and value <0.05 was considered as statistically significant. In conclusion it is clear that, students greatly benefit from this new technique of teaching. Confusion technique stimulates students to think and write upon various aspects of a single topic taught. Students develop interest in study-matters with the use of such tools. Comfortable student-teacher rapport is developed and stress-free atmosphere is maintained in the class.

Medical or any other educational institute conducting professional courses deals with theory lectures and practical sessions to achieve the curricular goals. A medical college develops a noble professional attitude amongst the students, which finally affects social environment. Thus these lectures and practical sessions are of immense importance in the academics of these institutes.

To make the learning more easy and fruitful, the teaching and learning methods used, play a major role. Teaching should be full of ideas instead of stuffed with the facts. If students are taught in a way that they will remember then in the future they will be able to put this knowledge to use in different situations. Lecturing or large group teaching is one of the oldest forms of teaching. Lecture as an instruction or verbal discourse by a speaker. The main advantages of lecture are coverage of topics, simplification of difficult concept [1-3]. Several studies found that lecture is the most widely used and accepted economical method of education [4-7]. Lecturing is a useful way of imparting a great deal of information quickly, but it is a passive for students. Students criticize lectures because they may be boring, or even useless when given passively. It has been suggested that only one tenth of what the lecturer is teaching is assimilated by the students [8]. Lecturing is not a good method for all teaching purposes. The best use of lecturing is in combination with other methods; this helps students retain their interest and attention and allows for more student participation. Probably an equally popular teaching method is clearing out the doubts when students are asking the doubts on confused topics, which they have not understood well during lectures in the classroom.

Biochemistry is a science having numerous applications in medicine. Presently the teaching in biochemistry is done in a traditional way, which is composed of lectures, small group teaching and demonstration. Over the period of years by taking only passive lectures, it has been observed that, first year dental students often find it difficult to understand and remember various volatile complex reactions and structures involved in lipid chemistry.

Considering some advantages of traditional lectures and to make it more effective the present research project was undertaken. Confusion technique is one such tool, which is used to achieve departmental as well as specific learning objectives. In confusion technique participants anonymously ask questions about confusing and difficult aspects of your presentation. Answer these questions and use a simple strategy to help participants recall and summarize key concepts [9]. With this background in our mind, this project was planned with the objective to try and introduce confusion technique as an effective way of teaching to the first year dental students.

Selection and designing of lecture

This study was carried out at the Department of Biochemistry, Sinhgad dental college and hospital, Pune. The topic Phospholipids from the chapter Chemistry of lipids was selected with prior discussion in the peer group and consideration of its importance as must to know core- group in the first BDS in the subject Biochemistry. The lectures were designed on the selected topics for time distribution of 45 minutes class.

Preparation of the confusion technique

Preparation of the blank chits was done. In context to subject and technique a concise feedback form was designed and discussed with the peer group. A pre and post-test question paper was prepared including both open and close-ended questions. The feedback forms also contained questions regarding the teacher, about the new teaching technique and students experience during lectures.

Execution of the confusion technique

The confusion technique was carried out for first BDS batch on the topic phospholipids. First of all the lecture covering the concerned points was conducted for 45 minutes. The students were briefly introduced to the new study game and chits were distributed. With the help of assistance use of confusion technique was done with efficient confidence in the class. Then the students were asked to write questions or doubts without revealing their identity on chits and passing of chits was done in a joyful way for about 30 seconds. All chits were collected from the students and kept on table. Then Pre-test in terms of multiple type questions and short answer questions were conducted for all the students. The chits, which were collected, again redistributed among the students and they were asked to play the game again. Then the students were asked to read out the questions, which they have received. Almost all questions were answered promptly. Due to lack of time very few chits were kept pending which were answered in the next due lectures. Then Post-test in terms of multiple type questions and short answer questions was conducted and written feedback was also obtained from the students. The session was declared as over with expression of thanks towards the students for participating actively in the project work. Then by evaluating papers the performance of the students was assessed. Marks obtained in both Pre and Post-test and feedback given was compared for analysis.

The data was explored for normalcy using Kolmogorov- Smirnov test. Since the data deviated significantly from normal distribution (P<0.001) we decided to use non- parametric test for comparison. The significance of differences between the marks scored before and after the “confusion technique” were compared using Wilcoxon test for paired comparison (non-parametric analogue of paired-t-test). Significance level was set at 5% and any value <0.05 was considered as statistically significant.

Feedback forms filled by the students were studied and frequency of positive answers for each question was considered for analysis. All these observations were noted in the tabular form (Table 1) (Figures 1-5). 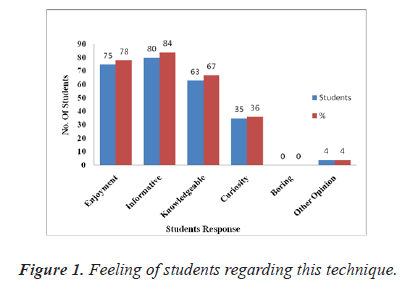 Figure 1. Feeling of students regarding this technique. 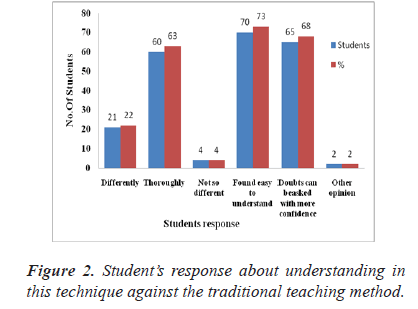 Figure 2. Student’s response about understanding in this technique against the traditional teaching method. 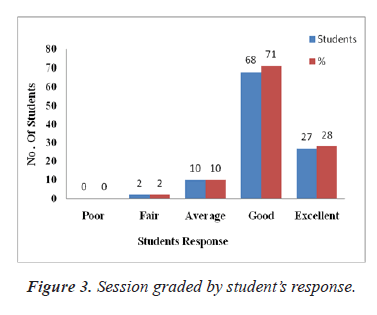 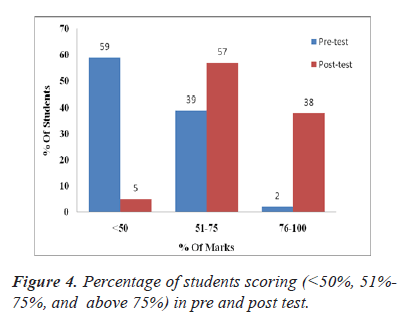 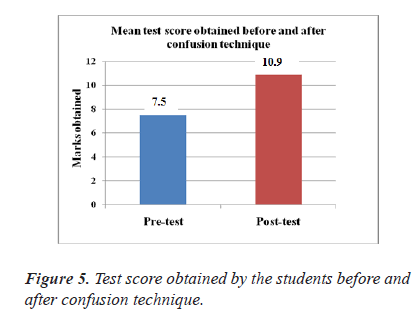 Figure 5. Test score obtained by the students before and after confusion technique.

A meaningful teaching and learning process therefore depends on abilities and effort of both teachers and the students. There is a fundamental shift in the role of teacher in student-centered education [10]. If students are to learn desired outcomes in a reasonably effective manner, then the teacher’s task should be to get students to engage in learning activities that are likely to result in their achieving those outcomes [11]. The confusion technique is a game like teaching tool in which written queries are handed over like passing the parcel and identity of person asking the question remains hidden. The tool is used at the end of the lecture with a little extra time. The technique helps to solve all the queries with an enjoyment. The confusion activity has been most advantageous when the participants have some amount of previous knowledge. Asking the doubts to the teacher instead of just looking and listening increases students understanding in learning. Active involvement motivates people to learn more effectively [12]. Technique by asking the questions to the teacher, students get an opportunity to understand the confused topics in front of their peers. They can observe how other students ask difficult aspects of topics and can benefit from information given by teacher. The purpose of this project was to introduce confusion technique as a novel method of teaching to improve learning experience of the students during lectures.

From the results it is clear that confusion technique as a teaching tool can be practiced in medical education within regular lecture schedule. From the students feedback form it shows that almost all have reported that they were told specific learning objectives at the beginning of the class. All objectives were covered in the session. All (100%) students agreed that audio-visual aid (OHP) was used. 96% students were satisfied with the new technique of teaching. About 97% of students were understood the concept of the topic by this new teaching tool. About the personal feeling of the students regarding this technique, the observations indicate that the lecture session was informative, knowledgeable, full of study matter and joyful atmosphere with curious attitude was created. Initially the students were reluctant and shy to come out with asking questions openly, but there was gradual acceptance of this technique by the students. By the end of lecture, they were quite comfortable and developed confidence and started to ask questions or doubts boldly. A few students had to be occasionally reminded to write only about relevant questions and not chitchat on anything else.

Response of students for this method vs. traditional teaching methods was that the topic was understood differently, thoroughly and students were stimulated to think and write. They were reading their difficulties without any apprehension. They were answering with confidence and participated actively. The other opinion suggested that the technique is a good tool and can be practiced for different subjects of first BDS like Human Anatomy. It is feasible and with a regular practice, a command can be acquired in teaching methodology. Institutional awareness can be developed for such tools but regular routine work and other allotted work regress the priority position of such projects. A few blank/irrelevant chits indicate that few students might have neglected the instructions given during the explanation of confusion technique in the classroom.

During the course of the project, healthy and joyful atmosphere was created in the classroom. The students were more attentive in class and asked more questions to clear out their doubts. The students appreciated this new technique of teaching and this was evident from the feedback forms. They wished that more lectures should be taken in a similar fashion.

In conclusion, it is clear that confusion technique as a teaching tool can be practiced in medical education with regular lecture schedule. Students greatly benefit from this new technique of teaching. Even the introduction of confusion technique in a short module within a course can be of significant benefit to the students. Confusion technique stimulates students to think and write upon various aspects of a single topic taught. Students develop interest in study-matters with the use of such tools. Comfortable student- teacher rapport is developed and stress-free atmosphere is maintained in the class. This supports the argument that wherever possible, confusion technique should be introduced.

In the current modern teaching technology, confusion technique teaching tool is very useful. Keeping in mind a little extra time is required in this technique.