Lymphatic filariasis is a global problem, with about 120 million people infected worldwide in 80 endemic countries. Filarial infections have been associated with the development of strongly polarized Type 2 host immune response and a severe impairment of type 1 cytokine production in humans. The aim of this study was to assess the immune responsiveness of patients with lymphatic filariasis, by studying their cytokine secretion profile. Samples were collected from 45 patients of different clinical manifestations such as chronic with lymphatic pathology (n=15), microfilaraemics (n=15) and endemic controls (n=15). Fifteen samples from non-endemic healthy controls were also included in the study. The levels of interleukin-2 (IL-2) and interferon-γ (IFNγ) for type 1 and interleukin-4, interleukin-5 and interleukin-10 (IL-4, IL-5 and IL-10) for type 2 responses were estimated by ELISA in peripheral blood mononuclear cell (PBMC) culture supernatants. The cells were cultured and sensitised with purified W. bancrofti extracted micro filarial antigens. The results showed the induction of type 2 immune responses with down regulation of type 1 responses. Levels of IL-4, IL-5 and IL-10 were increased in all chronic, microfilaraemic and endemic control cases. The analysis of data showed significant decrease in IL-2 (p<0.01) and IFNγ (p<0.02) levels in microfilaraemic patients as compared to chronic and endemic control cases. Our findings suggested an attenuated T-helper 1 response in patients with filariasis. The data presented here suggest a complex relationship between the host immune response and parasite establishment and survival that cannot be simply ascribed to the Th1/Th2 paradigm. There is an up regulation of IL-4, IL-5 and IL-10 expression in patients with lymphatic filariasis and a simultaneous decrease in levels of the interferon-gamma and IL-2. The profile of different cytokines in this study may prove useful in further stage-specific diagnosis of filarial patients of different clinical manifestations.

Lymphatic filariasis is caused by the nematode parasite Wuchereria bancrofti in tropical regions of the world including India. It is a global problem, with about 120 million people infected worldwide in 80 endemic countries. It is thought to be the second leading cause of permanent and long-term disability. In India, the population at risk of developing filariasis was 454 million in the year 2001 [1]. All the filarial parasites are vector borne, transmitted by mosquitoes, biting midges, tabands and black flies. These parasites elicit a broad spectrum of clinical manifestations like asymptomatic microfilaraemia, amicrofilaraemic chronic infection with lymphatic pathology, endemic controls resisting infection, etc [2].

Parasite antigens stimulate CD4+ cells preferentially to produce elevated levels of IL-4 and IL-5, whereas antigens from intracellular organisms (mycobacteria or viruses) are more likely to induce increased production of cytokines such as IL-2 and IFNγ [3-7]. In filariasis, antigen specific cellular hyporesponsiveness has been observed among microfilaraemic (Mf) persons. Recent studies have suggested that this hyporesponsiveness is restricted to the Th-1 subset of CD4+ helper cells as Th-2 type responses to parasite antigens, specifically IL-4 and IL-5 production, appear not to differ between W. bancrofti-infected persons with Mf and chronic patients [6-11]. Clonal deletion has been suggested as one possible mechanism by which parasite-reactive lymphocytes, that may be capable of mediating resistance and/or immunopathology, are silenced in the microfilaraemic subjects [12]. Helminth infections are usually associated with a strong Th-2 response, as shown by up regulation of IL-4, IL-5 and IL-10 levels in animal models especially during chronic stages of infection [10,13-15].

A total of 45 sera samples were collected from patients with different clinical manifestations. Fifteen samples of clinically infected patients with signs of chronic filariasis such as elephantiasis, hydrocoele with lymphatic pathology, 15 samples of microfilaraemic patients showing microfilariae on blood examination and 15 endemic control samples (asymptomatic and amicrofilaraemic but who can resist infection) were collected from NICD, filarial Clinic and Institute of Medical Sciences, Varanasi, India. Fifteen non-endemic healthy controls (individuals who have never travelled to filariasis endemic areas) were also included in this study.

Antigen was extracted from W. bancrofti microfilariae, which were isolated from patients with high counts of Mfs (>500-1000 Mfs/ml) living in the outskirts of Varanasi. Blood was collected in heparin and diluted with PBS (1:10), layered on a percoll gradient (25-35%) and centrifuged at 400 g for 30 min. The layer containing Mfs was collected, diluted with PBS and pelleted at 10,000 g for 10 min. The pelleted material was suspended in 2 ml of PBS and then passed through 0.5 μm nucleopore membrane. The membrane filter was placed in a petridish containing PBS and Mfs were collected then homogenized and TRIS-EDTA extraction (10 mM Tris and 20 mM EDTA, pH 5.0) was done as described earlier [16]. Protein concentration was estimated by Lowry’s method [17].

The extracted antigen was purified by affinity purification on CNBr activated CL sepharose 4B beads. Chronic filarial antibodies (gamma globulins) were precipitated by ammonium sulphate and used as immunosorbent to purify filarial antigen as described earlier [18].

The PBMC culture supernatant was collected at 48 hour for IL-2, IL-5 and IL-10 and at 96 hours for IL-4 and IFNγ estimations. The levels of different cytokines were estimated by ELISA (Diaclone Research, France) using biotinylated antibody with the streptavidin peroxidase enzyme system.

The comparison of cytokine levels in all the groups (chronic microfilaraemic and endemic) with non-endemic controls was made by non-parametric Mann-Whitney ‘U’ test. Significance was calculated using Kruskal Wallis test.

In patients with lymphatic filariasis, cytokine profiles were studied, with respect to non-endemic controls.

Figure 2: IFNγ levels are shown as individual dots in different groups of patients. The bold horizontal line represents the mean value and the broken horizontal line indicates the threshold value of the IFNγ. 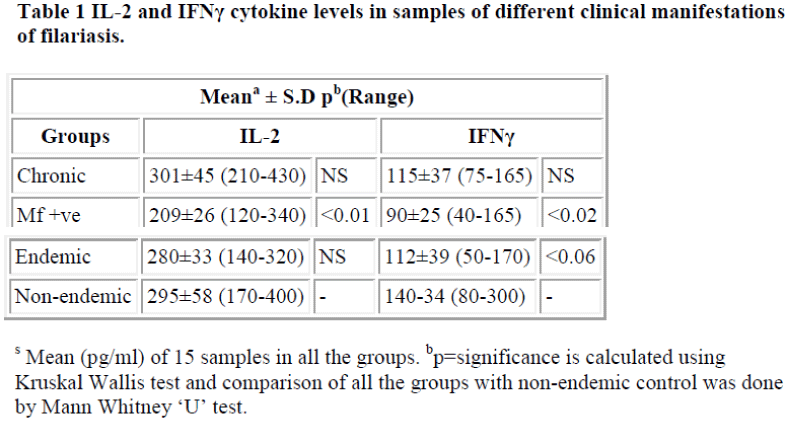 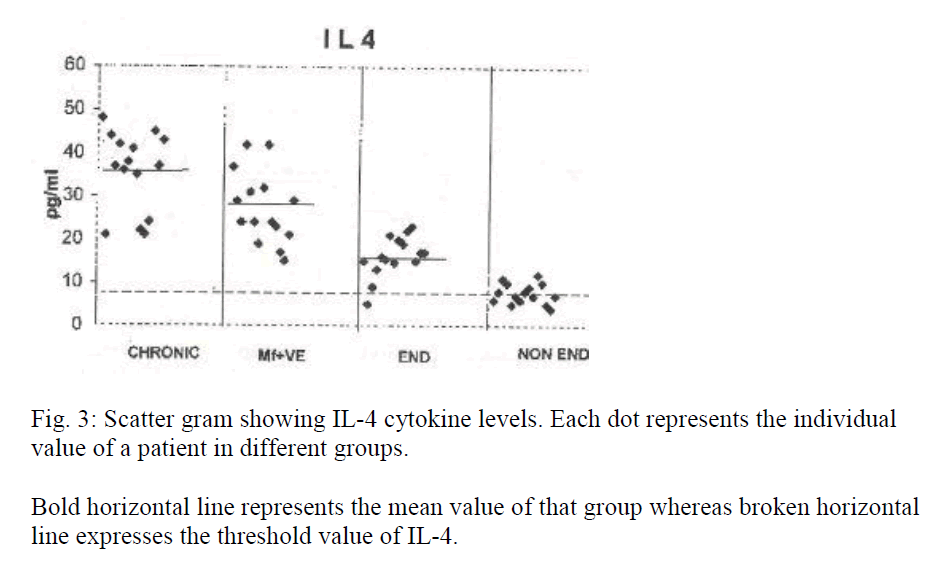 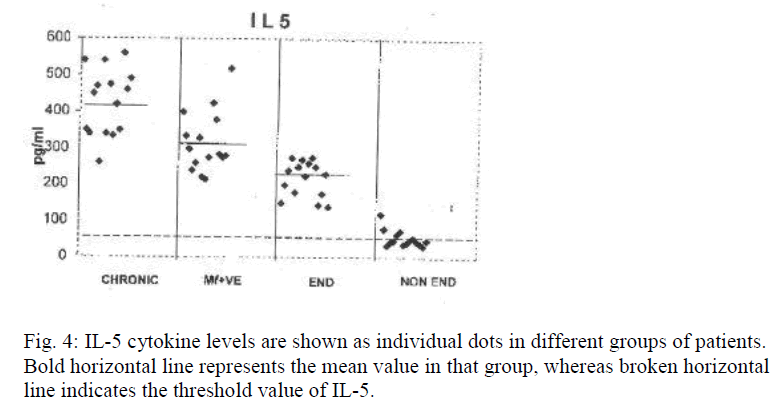 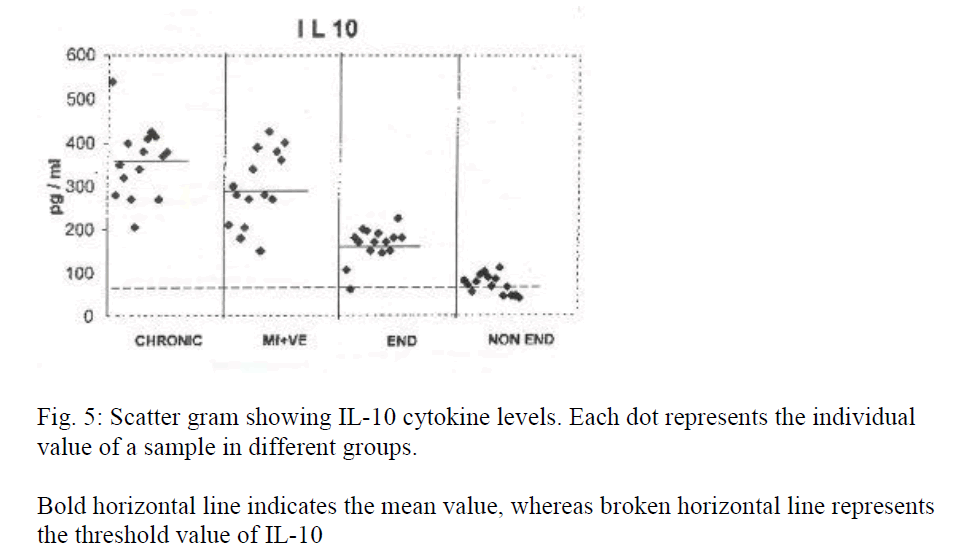 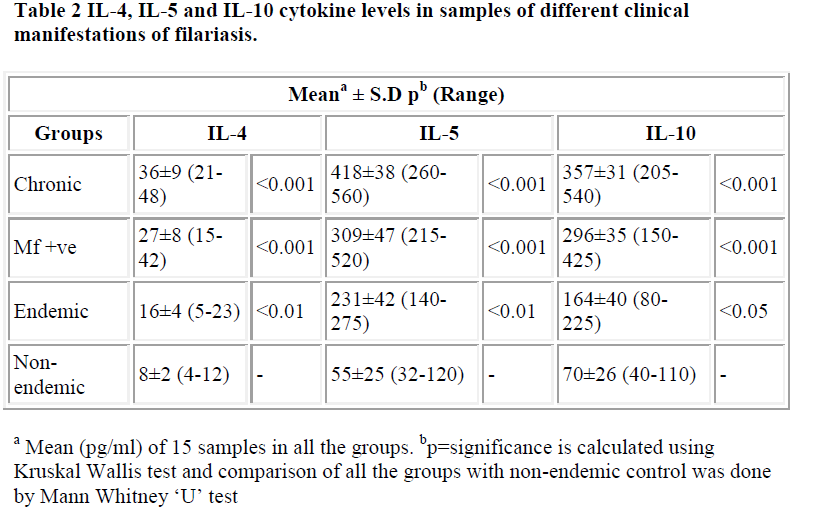 Under normal in-vivo conditions Th-1 and Th-2 patterns co-exist in a balance so that a protective immune response develops, while under pathologic conditions this balance may be shifted in either direction (13). It has been reported that Th-1 and Th-2 responses are conditioned by the antigen presenting cells [13]. Macrophages are better presenting cells for Th-1 responses, whereas B cells preferentially induce Th-2 activation [19]. Th-1 responses appear to mediate functions related to cytotoxicity and macrophage activation and therefore play an important role in combating intracellular micro organisms [19-22]. On the other hand, Th-2 responses are effective in helping B cells to produce antibodies and are important in combating extracellular bacteria or parasites in the induction of humoral immunity [22-27].

In parasitic helminth infections including filariasis more or less similar Th-1/Th-2 response pattern has been shown. Earlier reports have demonstrated an increased Th-2 response producing IL-4 in human lymphatic filariasis [8]. The high antibody titre in chronic cases could be associated with a strong Th-2 response. Although the mechanism involved in the shift in responses towards Th-2 predominance in helminth infection is not very clear, the parasite antigen load can cause maximum up regulation of Th-2 responses [5,28]. Yazdanbaksh et al [29] have compared the plasma levels of soluble CD25 and CD27 (sCD25 and sCD27) and IL-4 and IFNγ release by peripheral blood mononuclear cells of filarial patients. They observed that both chronic and microfilaraemic patients had significantly higher levels of sCD27 and IL-4 as compared to endemic and non-endemic controls. Moreover, plasma from chronic patients contained higher sCD27 levels than plasma from microfilaraemics. Similar findings were reported by Nielsen et al [7], who found an elevation in levels of IL-4 and IL-10 in chronic and microfilaraemics, as compared to endemic and non-endemic controls.

Our findings suggest an attenuated Th-1 response in patients with filariasis. Although the mechanisms are unclear, others have suggested that clonal deletion [12] or a block of CTLA-function [30] may be important.

In the present study, our results showed up regulation of Th-2, mainly producing IL-4, IL-5 and IL-10 in chronic filariasis cases, to a greater extent than in microfilaraemic and endemic controls. The higher degree of activation of Th-2 in chronic cases is in agreement with the observed hyper immune responsiveness in these patients [19,25,31]. Similarly, earlier reports of parallel regulation of IL-4 and IL-5 in human helminth infections and Th-2 biased lymphatic filarial patients are in good agreement with our results [8,31].

In this study, the down regulation of Th-1, as estimated by IL-2 and IFNγ cytokine levels confirmed the Th-1 type (cellular) hyporesponsiveness in filarial patients [32-34]. The microfilaraemic cases showed remarkable decrease in Th-1 response as compared to other groups of patients. These results are no different than our earlier reports of low levels of macrophage migration inhibition and leukocyte migration inhibition in filariasis [18,35]. The data presented here suggest a complex relationship between the host immune response and parasite establishment and survival that cannot be simply ascribed to the Th1/Th2 paradigm.

In the present study, although 3 cases showed slight discordance in the pattern and did not show a decrease in IL-2 and IFNγ levels, yet this might be due to heterogeneity in antigen preparation [18,35]. The cross-regulated mechanism of action of cytokines may explain the inhibition of IL-2 and IFNγ which could be due to IL-4 and IL-5 secreting T-cell expansion. Once the ratio of Th-1/Th-2 cells has shifted to Th-2 balance, the dominant population is likely to down regulate the induction or expansion of the other subset through a cross-regulating cytokine such as IL-10 [34,36]. The profile of different cytokines in this study may prove useful in further stage-specific diagnosis of filarial patients of different clinical manifestations.