2Department of Periodontics, College of Medicine, The Catholic University of Korea, Seoul, Republic of Korea

Cinnamon has been used for neuralgia on the knees and waist, and it is shown to have a wide antibacterial spectrum in both Gram-positive bacteria and Gram-negative bacteria. In this study, glucosyltransferase adhesive ability, acid-production suppression effect, and antibacterial activity were measured to identify the anti-caries effect of cinnamon extract. It was shown that cinnamon extract effectively suppressed acid production and bacterial adhesion for Streptococcus mutans and Streptococcus sanguinis . Additionally, the measurement result of the minimum inhibitory concentration of the cinnamon extract showed that the bacterial growth and development was inhibited at a 4 mg/ml concentration for anti-caries bacteria. In terms of the minimum bactericidal concentration, 99.99% bactericidal action was also confirmed at 4 mg/ml, and a high bactericidal action was shown with the smallest concentration for cariogenic bacteria. With regard to the adhesion-inhibition of glucosyltransferase, which is an oral pathogen for Streptococcus mutans that typically causes dental, caries among oral pathogens, the inhibitory effect appeared to be based on the concentration of the cinnamon extract, thereby showing that cinnamon extract has the ability to inhibit the fraction’s adhesion. Based on the results, it is concluded that cinnamon extract has the potential to be used as a natural antibacterial agent for oral pathogens, as it possesses acid-production suppression ability, the bactericidal action of the minimum bactericidal concentration, adhesion-inhibition ability, and anticaries effect.

The World Health Organization (WHO) has selected oral diseases, including dental caries, periodontal disease, halitosis, and oral pain, as international health problems that need to be solved in the future [1]. In a worldwide scope, 60% to 90% of school children and almost 100% of adults have dental caries, while 15% to 20% of middle-aged (35 to 44 years old) adults have severe periodontal disease [1]. These oral diseases become risk factors of tooth loss and potential risk factors of systematic diseases, such as diabetes complications, hypertension, pneumonia, osteoporosis, and low birth weight [2,3]. Oral disease is a global health concern that needs to be solved, and it requires more study and the development of an effective and strong oral bactericide without the risk of side effects [4].

The intraoral environment with good humidity and a good temperature may serve as a breeding ground for bacteria [5]. The use of antibiotics, fluorine compounds, and chlorhexidine, among others, can prevent biofilm-related diseases, however, resistance to antibiotics, fluoride compounds, and chlorhexidine causes side effects in the human body [6]. Chlorhexidine, which is well-established active ingredient in mouthwashes, can decrease the amount of bacteria or suppress the formation of oral biofilm [7]. However, the regular use of chlorhexidine may cause side effects, such as a burning sensation, the staining of mucous membranes, and pigmentation on the tongue and teeth [8,9].

The above mentioned issues sparked the conducting of a study on using natural materials for commuting antibiotics and averting the side effects of chemicals [10,11]. Cinnamon bark belongs to the tall evergreen tree and contains 1% volatile oil ingredients, including phellandrene, eugenol, and methyleugenol, and it has a spicy and sweet taste as well as a recessive nature [12]. Cinnamon is widely used for neuralgia on the knees and waist, along with joint pathologies and nasogastric-tube revitalization [13]. Its benefits include food preservation, the antibacterial activity of synthetic food preservatives, and anti-cancer effects [14]. Cinnamon extracts showed a wide antibacterial spectrum in Gram-positive bacteria and in Gram-negative bacteria, particularly showing a strong genesistasis for Streptococcus iniae, Edwardsiella tarda, and Listonella anguillarum [15]. It was shown that cinnamon has a stronger sterilizing action in Gram-negative bacteria than in Gram-positive bacteria. However, limited antibacterial study of cinnamon has been conducted on the oral pathogen. As a result, this study tests the antibacterial effect of bacillus on dental caries by using cinnamon extract to contribute to the development of an effective intervention for the prevention of oral disease. This study evaluated the inhibition of glucosyltransferase adhesive ability, the suppression effect of acid production, and the antibacterial activity of cinnamon.

Cinnamon was obtained from the College of Biomedical Science, Kangwon National University, Chuncheon-si, Republic of Korea, and the material was identified by M.W. Cinnamon was chopped up and powdered in a mechanical grinder. Ethanol extract was obtained via a rotary vacuum evaporator (CCA-1110; Eyela, Tokyo, Japan) after filtration through filter paper (100 mm; Whatman, Maidstone, United Kingdom (UK)) by adding 80% ethanol to the pulverized cinnamon and doubling the weight. The remaining specimens were deposited at the Department of Medical Biotechnology, College of Biomedical Science, Kangwon National University.

First, after the seed culture for Streptococcus mutans KCTC 3065, which is the glucosyltransferase-producing strain, in the Brain-Heart Infusion (BHI) medium at a temperature of 37°C for 24 hours, the main culture was carried out by inoculating 2% (v/v) into a 450 ml BHI medium in the same conditions. For the supernatant, which was obtained via centrifugation at 6,000 rpm for 20 minutes at room temperature (Centrifuge 5427 R. Eppendorf, Germany), a 300 ml cooled ethanol was added to precipitate the protein. After being kept overnight at a temperature of 4°C, the precipitated protein that was obtained via centrifugation at 8,000 rpm for 30 minutes was suspended in 1 ml 0.05 M potassium phosphate buffer (pH 6.8, Sigma- Aldrich Co. LLC, Germany). It was set to be crude glucosyltransferase and kept in a freezer at a temperature of-20°C.

By adding a 0.8 ml substrate solution (12.5 g sucrose and 0.25 g NaN3 are contained in 1 L 0.0625 M potassium phosphate buffer (pH 6.5)), 0.025 ml crude glucosyltransferase, and 0.175 ml cinnamon at a 250 mg/ml concentration to a test tube, the final solution was adjusted to 1 ml. For the control group, 0.175 ml distilled water was added. After making the test tube stand at approximately a 30° angle against the horizontal plane, the solution reacted at a temperature of 37°C for 16 hours. After the reaction, the supernatant was discarded, and after a 5 s ultrasound treatment by adding 3 ml distilled water, the formed glucan was dispersed. Right after dispersion, the absorbance was measured at 550 nm with a spectrophotometer (UV-1601. Shimadzu, Japan) and the degree of the cinnamon extract’s adhesion-inhibition was calculated. The adhesiveinsoluble glucan-synthesis inhibition rate was calculated by using the following equation. The adhesive-insoluble glucansynthesis inhibition rate (%)=A-B/A × 100 (A is the absorbance value of adhesive glucans that are formed in the control group, while B is the absorbance value of adhesiveinsoluble glucans that are formed in cinnamon).

The effect of cinnamon extracts on acid-production ability in Streptococcus mutans, Streptococcus sanguinis KCTC 3284, and Streptococcus sanguinis KACC 11301 was examined. After mixing by adding 0.5 ml fractions prepared by concentration (2 mg/ml and 4 mg/ml), which served as a control group, 1 ml of a 2% glucose solution was added to 2 ml bacterial suspension (OD600=1.2) in each test tube. The pH that changes overtime was measured for 4 hours with a onehour interval, while the solutions were cultured at the optimal incubation temperature to examine the degree of acidproduction suppression.

The glucosyltransferase adhesion-inhibition effect of the cinnamon extract was highest at the 10 mg/ml concentration, which was 70%, followed by 56.6% at 8 mg/ml, 42.1% at 6 mg/ml, 33% at 4 mg/ml, and 20% at 2 mg/ml (Figure 1). It was confirmed that the cinnamon extract had fraction adhesioninhibition ability. 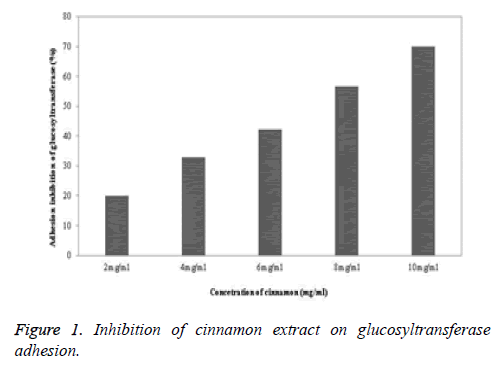 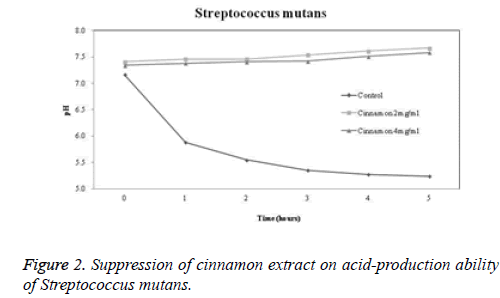 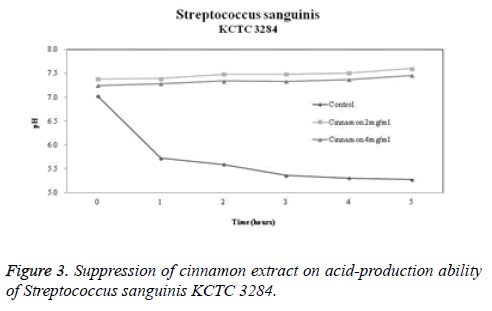 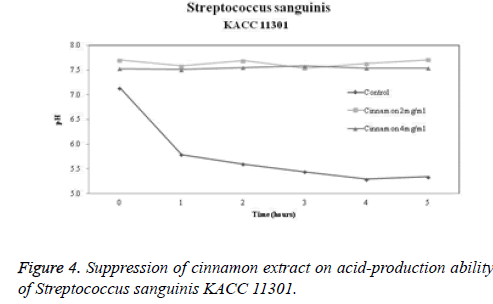 Measurement of antibacterial activity of the cinnamon extract

Many essential oils have been advocated for use in complementary medicine for bacterial and fungal infections [19]. Cinnamon oil was found to be more effective than clove oil, exhibiting a broad spectrum of antibacterial activity [20]. Cinnamon oil produced the maximum inhibition zone of a diameter of 24.0 mm against the major causative bacteria of dental plaque of Streptococcus mutans, which had a maximum inhibition zone of a diameter of 13.0 mm [20]. Cinnamon oil showed the highest activity against Streptococcus mutans, followed by lemongrass oil and cedarwood oil. Wintergreen oil, lime oil, peppermint oil, and spearmint oil showed no antibacterial activity [19].

Moreover, cinnamon extract showed intracanal bacterial reduction against Enterococcus faecalis with 80 to 85% intracanal bacterial reduction [21]. This suggested that cinnamon oil has the potential to be used as an antimicrobial agent in root canal treatment [21]. The use of the cinnamon extract decreased plaque and gingival scores, suggesting the ability to reduce plaque levels and gingivitis [22]. The functionalization of different dental implant material surfaces with cinnamon oil resulted in immediate and on-going antibacterial and antiplaque activities [23]. Toothpastes featuring natural compounds with cinnamon are commercially available, and they showed antimicrobial activity [24]. Additionally, commercially available sugar-sweetened cinnamon chewing gum may benefit halitosis by reducing volatile sulphur compounds producing anaerobes in the oral cavity [25].

The results showed that the acid product inhibition of cinnamon is significantly higher in the control group. Meanwhile, the result of adding 2 mg/ml and 4 mg/ml cinnamon extract after 5 hours for each group showed that the pH had been maintained over 7.4, and there was only a low concentration of the acid product inhibition of the cinnamon extract. The pH result was higher than in the previous study showing that the Lonicera flower can inhibit acid production in its pH with 6.57 and 6.16 in 2 mg/ml and 4 mg/ml [26]. A previous report also showed that the Lonicera flower showed antibacterial effects on Staphylococcus aureus [27]. Camellia japonica extract's antibacterial activity is notable for suppressing as much as 18 mm in concentration of 250 mg/disc with the high inhibition of acid production [26].

A satisfactory level of the safety and tolerability of cinnamon oil was reported [30], and cinnamon oil was reported to be cytocompatible with fibroblast [31]. However, cinnamoninduced contact stomatitis has been reported, and the most commonly affected site was the gingiva, which showed diffuse or generalized erythema and epithelial sloughing [32,33]. The resolution of symptoms occurred after discontinuing the product containing cinnamon [34,35].

Based on the results of this study, cinnamon extract showed high effects on acid-production inhibition and the minimum growth inhibitory concentration. In addition, the inhibition of glucosyltransferase adherence can be effectively used for the prevention of dental disease and contribute to the enhancement of oral health. Further clinical trials seem necessary to establish their safety and efficacy.