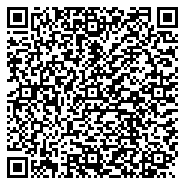 As an important means of information exchange, mobile phones have more and more penetrated into people's lives nowadays. Currently, the most widely used work frequency of mobile phones is GSM 900 MHz (Global System for Mobile Communications), the electromagnetic radiation pollution of which brings harm on human health and even leads to major public health problems, so mobile phone radiation has aroused people's attention [1-3]. Scholars all over the world have carried out a large number of epidemiological investigations and experimental studies toward the impact of mobile phone radiation on biological effects, but the results are not consistent [4-6]. In recent years, the rate of mobile phone usage in children and adolescents shows an increasing trend, while whether electromagnetic interference (EMI) may cause potential harm on the growth and development of children and adolescents is rarely investigated [7]. In 2010, World Health Organization (WHO) organized seminars and emphasized the impact of EMI on children and adolescents as one preferred project [8]. However, relevant studies were conducted among epidemiological surveys, focusing on the happiness, cognition, attention, or behavioural problems [9,10]. Certain study once reported that often using mobile phones can greatly increase the adjusting dominance ratio of headaches, migraines, or pruritus in children [11]. However, the potential harms of mobile phone radiation toward the growth and development of children and adolescents still lack clinical experiments, so it needs further studies.

The brain tissue is the closest part to the working mobile phone, so the impact of mobile phone radiation on the brain tissue has more and more become a hot spot. Choline’s and monoamine neurotransmitters are important neurotransmitters secreted by the brain, and they can transmit various kinds of information so as to achieve the brain’s function of regulating the body’s physiological function. This study used young mice as the subjects, and detected the contents of Acetylcholine (Ach), Dopamine (DA), and 5-Hydroxytryptamine (5-HT) in the brain tissue of young mice exposed to EMI, and explore the mechanism of mobile phone radiation on the growth and development and physiological function of children and adolescents, hoping to investigate the impact of mobile phone radiation on the growth, development, and physiological functions in children and adolescents.

2-week-old C57BI/6J young mice (weighing 6-8 g, male: female=1:1, certificate No.5CXX (Jing) 2007-0003) were provided by Beijing Vital River Laboratory Animal Co. Ltd. This study was carried out in strict accordance with the recommendations in the Guide for the Care and Use of Laboratory Animals of the National Institutes of Health. The animal use protocol has been reviewed and approved by the Institutional Animal Care and Use Committee (IACUC) of Hebei University of Engineering. The distance between mobile phone and base station was not measured. The laboratory electric field intensity range is between 1.3 × 10-4 W/m2~2.2 × 10-2 W/m2 by the German Narda company's NBM-500 type electromagnetic field strength measuring instrument, which has met GB 8702-1988 "electromagnetic radiation protection regulations" requirements (less than 0.4 W/m2, the threshold value for public irradiation).

A total of 30 young mice were randomly divided into group C, group L, and group H, with 10 mice in each group. Each mouse was housed alone in one cylindrical cage with free access to diet and water (environmental temperature 25°C, humidity 40%~45%). During the experiment, we use an external partition board to restrict the activity space of the single mouse in the cylindrical rat cage. After the mobile phone signal is connected, the external suspension type is adopted to ensure that the antenna part of the mobile phone is close to the ear of the rat. The mobile phone (a certain brand of commercial mobile phone with the frequency as GSM 1800 MHz) was used to simulate the status of making phone calls. Meanwhile, the antenna of the mobile phone was ensured to be close to the ear of each mouse for the irradiation. Group L was irradiated 30 min × 3 times a day (8:00, 12:00, and 20:00), while group H was irradiated 60 min × 3 times a day (8:00, 12:00, and 20:00). The three groups were treated in the same way, while the phone used in group C was not connected. After 4 weeks of radiation, all the rats were killed by ether, and the brain tissues were collected to detect the contents of Ach, DA, and 5-HT by LC-MS/MS.

Each brain tissue sample was weighed, and homogenized in 0.1% formic acid solution (v/w=5 mL/g). After 5 min ultrasound on ice and 10 min centrifugation at 14000 r/min and 4°C (LG16-B, Beijing Lab Centrifuge Co., Ltd.), the supernatant was placed into one sample vial, freeze-dried, and stored at -20°C. The lyophilized sample was then added 20 μL of internal standard, 20 μL of 50% acetonitrile (containing 0.1% formic acid), and 50 μL of 50% acetonitrile (containing 0.1% formic acid), and vortexed for 2 min (XW80A, Shanghai Medical Instrument Factory). After 6 min centrifugation (14000 rpm), the supernatant was transferred into an auto sampler vial, and 50 μL of the sample was injected into one LC-MS/MS for the analysis.

SPSS12.0 software was used for the analysis of variance; the data were expressed as x̄ ± s, and the pairwise comparison used the q-test, with P<0.05 considered as statistical significance.

The detection of the contents of Ach, DA, and 5-HT in the brain tissue of the mice exhibited good accuracy and precision under the experimental conditions. The MS peaks of each neurotransmitter were intact without tailing and should-peak (Figure 1). 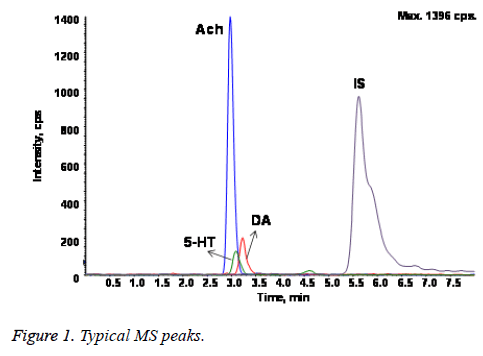 Impact of EMI on brain neurotransmitters

Table 1. Impact of EMI on brain neurotransmitters in mice during growth and development period.

Mobile phones emit electric waves when in communication, so the electromagnetic field generated around increases the electromagnetic pollution, if these waves are propagated in vivo in the right direction, they can be totally reflected and form standing waves, which is the maximum energy absorption in vivo and can cause certain biological effects, thus having impact on human health [12,13]. When persons are making phone calls, the brain is the body tissue nearest to the mobile phone, so the impact of mobile phone radiation on the brain tissue has become the focus of attention [14]. Cells, especially the brain cells, in children and adolescents are in the productive development period, and childhood and adolescent stages are important growth and development periods. Some scholars believe that the brain tissue in children has more adsorbent while thinner skull and relatively smaller proportion, so children may absorb EMI much more easily than adults [15].

In the present study, the contents of Ach, DA, and 5-HT in the brain tissue of mice were measured so as to explore the impact of mobile phone radiation on brain neurotransmitters in the growth and development period. The results indicated that EMI can cause metabolic disorders of DA and 5-HT in the brain tissue. Aboul Ezz et al. reported that the monoamine neurotransmitters in adult mice exposed to EMI can be interfered [16]. Ji et al. reported in 2011 that exposing to highintensity EMI can lead to neurotransmitter metabolic disorders in foetal rats [17]. Eris et al. showed that short-term EMI can increase the content of blood 5-HT, which can lead to learning slowness and spatial memory deficiency [18]. The results of this study suggested that there was no statistical significance in the Ach content among different experimental groups; however, certain studies also reported that 800 MHZ electromagnetic radiation can increase the release of Ach in mice, the different results of which may be caused by different experimental animals or experimental methods [19].

The brain neurotransmitters are the molecular mechanism that can impact the functions of the central nervous system, mainly including choline’s and monoamines. The central cholinergic system is closely related to learning and memory, among which Ach is one important neurotransmitter in the central cholinergic system, mainly functioning in such cognitive activities as learning and memory, spatial working memory, attention maintenance, spontaneous movement, or exploring behaviours. Among the monoamine neurotransmitters, DA is the key neurotransmitter in the hypothalamus and pituitary gland. The DA-energy nervous system plays an important role in pleasure and behaviour motivation. 5-HT is mainly distributed in the pineal gland and hypothalamus, and its functional activity reduction is closely related to depressive mood, anorexia, sex disorder, or endocrine disorders in depression patients [20].

Neurotransmitters are synthetized by neurons and then transported into the synaptic vesicles in the pre-protruding cells, which are then converted by the Ca2+ channel and released at the nerve ends. After diffusing through the synaptic cleft, neurotransmitters act on the postsynaptic neurons or the receptors of effector cells, thus realizing the roles of transferring, amplifying, and regulating information among neurons. Hocking et al. considered that EMI may change the neurotransmitter system, including the neurotransmitter release and the receptor coagulation [21]. Mugunthan et al. reported that long-term exposing to 900-1800WHZ EMI can significantly reduce the density and diameter of the hippocampal neurons in foetal mice [22]. Anderson et al. reported that a small amount of EMI toward the embryonic mouse brain tissue can cause acute morphological changes in the mature brain tissue [23]. The glial cells can support and neutralize the neurons. Lu et al. reported that EMI can lead to inflammation in the microglia and astrocytes [24]. Other similarities also reported that EMI can result in the death of neurons and glial cells [25,26]. In our experiments, the mice received EMI in their growth and development period exhibited the content changes of DA and 5-HT in the brain tissue. The mechanism is not clear yet, maybe due to the disturbances of electromagnetic radiation of mobile phone to the weak and stability electromagnetic field of brain, which cause morphological or functional changes of the brain cells and lead to metabolic change. The content changes of DA and 5-HT in the brain tissue were caused by the injury of neurons and glial cells, or by the synthetic and metabolic imbalance of neurotransmitters still needs further experiments foe the verification.

This study was supported by the Projects of Hebei Health Department.