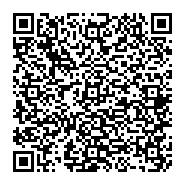 Identifying potential adverse effects in development and maintenance of masticatory system due to tooth loss.

Many investigations have been conducted previously on the association of different factors with low mastication ability. In the similar context, the current study aims to examine the adverse impact in developing and maintaining masticatory system in individuals with tooth loss. Pregnant female mice were included in the study and experiments were conducted on both the tooth extracted mice (experimental) and mice with intact teeth (control) on 30th, 60th, 90th, 120th, 180th, and 360th following their birth. There was no substantial difference in the mean body weights of the mice in both classes, according to the findings. Furthermore, in the test group of mice, there was no substantial difference in the number of named Me5 and TG neurons on the right and left sides. There was a substantial decrease in the number of labelled Me5 and TG neurons in the tooth extracted mice from the 60th to the 360th postnatal day. On the 40th day, there were no degenerative fibres on the intact side of the tooth extracted mouse, but normal degenerative changes were present in the axons and myelin sheaths on the tooth extracted side. The study concluded masticatory system’s development and maintenance involves sensory input from periodontal mechanoreceptive afferents.

Optimum cognition status is essential for quality of life regardless of age factor. Cognitive changes occur as the age increases and are often associated with certain extrinsic and intrinsic risk factors [1,2]. Considering the neurocognitive disorders, the cognitive changes are associated with memory, reasoning, learning, thinking, and judgmental abilities [3]. Severe cognitive impairment in an individual causes a serious negative impact on his professional and social life [4]. It is believed that proper cognitive level can be maintained through social engagements, education and physical exercises [5].

Optimal mastication is known as one of the factors responsible for preserving the cognitive function besides its main role in the intake and swallowing of food [6]. The impaired masticatory function triggered by either functional factors (poor masticatory performance or weak biting force) or structural factor (tooth loss) is termed as masticatory dysfunction [7,8]. This may result in the loss of periodontal support that leads to loss of tooth movement [9]. It has been shown that in older individuals (with less than 20 teeth), the masticatory ability scores and biting force decrease significantly [10]. In this context, Ikebe et al. [7] stated that tooth loss and inappropriate mastication are significantly associated with each other.

It is believed that periodontal disease is caused by the relationship between number of teeth and presence of a serious inflammatory disease. Consequently, periodontal disease may lead to multiple tooth loss. There is a negative impact of inflammatory cytokines and periodontal disease on the blood vessels of the heart and brain. A study has reported prevalence of carotid plaque in individuals who have lost 10 or more teeth [11]. It is obvious that individuals suffer from insufficient nutrient intake due to their low masticatory ability. Hajimohammadi et al. [12] showed that edentulous individuals suffer from the deficiency of plasma vitamin C that has antioxidant activity. This clarifies that it is reasonable to expect that elderly people suffering from low masticatory ability due to multiple tsooth loss are undernourished.

Researchers have conducted systematic reviews that focused on the association of different factors with low mastication ability on the individuals [13,14]. However, these studies failed to focus on the adverse effects of low mastication ability among the individuals. Moreover, none of the recent researches have emphasized on the negative impact of masticatory system development on individuals with lost teeth. Therefore, the current study tries to reduce the heterogeneity by focusing on the adverse effects of developing and maintaining masticatory system on the individuals with lost teeth.

The study included pregnant female mice, which were alternatively kept in darkness and light for 12 hours. On the day 5 after the birth, the litter was reduced to 10 male pups. Consequently, on day 20, lower and upper molars were extracted unilaterally. Afterwards, experiments were conducted on both the tooth extracted mice (experimental) and mice with intact teeth (control) on 30th, 60th, 90th, 120th, 180th, and 360th day following their birth to assess the impact of loss of tooth on the masticatory neurons.

Both laboratory operations, including the treatment and use of animals for experimental procedures, were carried out in compliance with Hiroshima University’s Laboratory Animal and Testing Facilities’ guidelines.

The method of Horseradish Peroxidase-Wheat Germ Agglutinin (HRP-WGA) tracing was used for explaining the role of periodontal afferent in developing and maintaining the masticatory system in mice between 30th and 360th day following their birth. For this purpose, mice of both the control and the experimental groups (each group comprised 6 mice) were selected and HRP-WGA method was applied on the 30th, 60th, 90th, 120th, 180th and 360th postnatal day. Each animal was given anaesthesia through an intra-peritoneal injection of sodium pentobarbital after measuring their body weight (0.06 mg/g). The bilateral Inferior Alveolar Nerves (IAN) were exposed in the anterior side of the mandibular foramen through the surgical procedure.

A solution of 5% HRP-WGA (Toyobo, Osaka, Japan) was injected with the help of glass. The solution, into each nerve bundle, was entrapped in a 1% hypoallergenic polyacrylamide gel. 200 ml of heparinized saline was perfused after 24 hours in deeply anesthetized animals through the ascending aorta. This was followed by immediate perfusion of 300 ml of fixative (1% paraformaldehyde and 1% glutaraldehyde in 0.1 M phosphate buffer) having pH of 7.4. Later, the fixative was flushed out with the help of 200 ml of 10% sucrose in 0.1 M phosphate buffer having pH of 7.4. The trigeminal ganglion was stored in solution of 30% sucrose in phosphate buffer with pH of 7.4 at 4ºC.

50 μm thick transverse frozen sections were cut serially and it was later processed based on the Tetramethylbenzidine (TMB) protocol [15]. Light microscope (AX70; Olympus, Tokyo, Japan) was used for the examination of these sections and count the total number of labelled neurons in Mesencephalic trigeminal nucleus (Me5) and Trigeminal Ganglion (TG). Camera lucida was used for shaping each labelled cell with clear nucleus in order to avoid double counting. The obtained data was analyzed to show the differences through t-test analysis with significance value <0.05

Following the birth of mice, they were being perfused with solution of 0.25% glutaraldehyde and 4% paraformaldehyde in 0.1 M phosphate buffer with pH 7.4 on the 40th day. The inferior alveolar nerves were removed bilaterally as they got exposed to mandibular foramen posteriorly. Later, the nerves were being immersed for 24 hours in the same fixative. 1% of Osmium tetroxide was used for post fixing the blocks of tissues. The staining of these tissues was done using 1% aqueous uranyl acetate that was embedded in Epon 812 and dehydrated with propylene oxide and ethanol. The ultra-thin sections were stained with the help of lead citrate and uranyl acetate, and were being examined under electron microscope (JEM- 1010; JEOL, Japan). 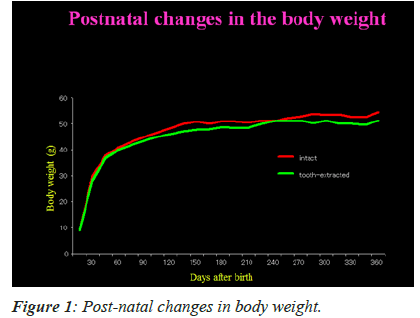 Labeled Me5 and TG Neurons 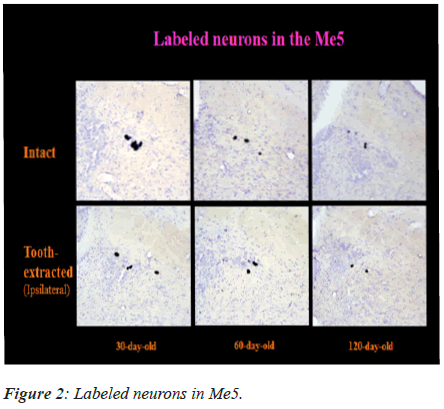 Figure 2: Labeled neurons in Me5. 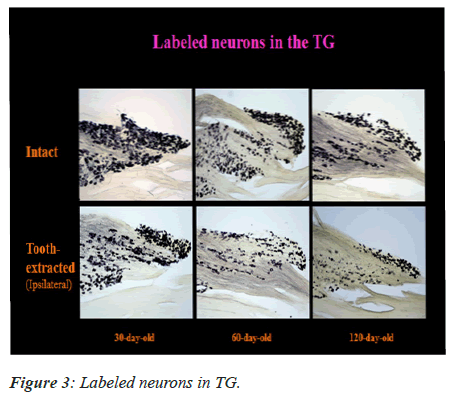 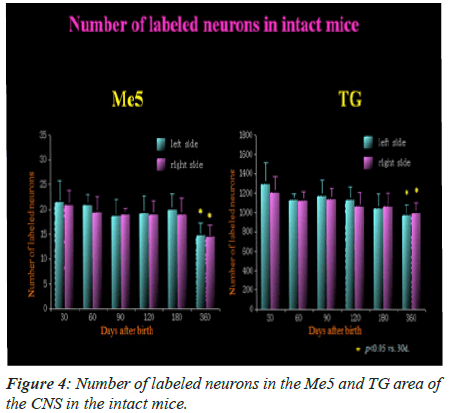 Figure 4: Number of labeled neurons in the Me5 and TG area of the CNS in the intact mice. 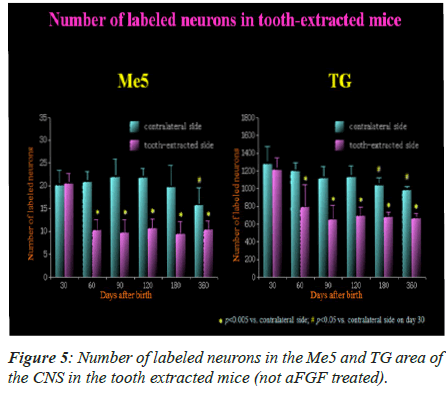 Figure 5: Number of labeled neurons in the Me5 and TG area of the CNS in the tooth extracted mice (not aFGF treated). 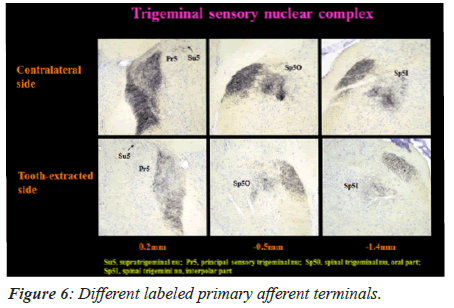 In the experimental mice group, the primary afferent terminals disappeared on the tooth extracted side on the 60th day, unlike the intact side. No significant difference was noted in the labeled terminals between the contralateral side in tooth-extracted mice and both sides (ipsilateral side and contralateral side) in mice with intact tooth. 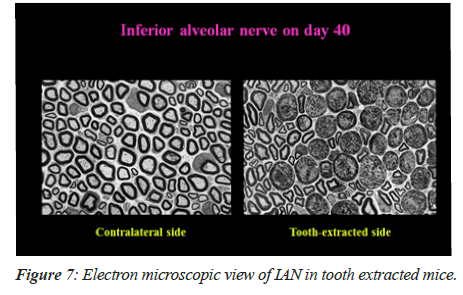 During some stages of animal development, sensory feedback from oro-facial sensory receptors plays a significant role in regulating the formation of the masticatory system. In mice with unilateral molar extraction and Osteopetrotic (op/op) mice with no teeth extraction, periodontal ligaments are likely to be less developed. The sensory feedback from the PMRs also controls the formation and preservation of the jaw closing muscle in animals. Suemune et al. [16] found that the number of jaws closing motoneurons innervating the masseter muscle decreased dramatically, along with a substantial decline in masticatory sensory neurons. As a result, sensory feedback from the PMRs is thought to play a key role in the postnatal growth of the masticatory system and the maintenance of homeostatic conditions for jaw movement control.

The current research shows severe IAN degeneration in tooth-extracted experimental mice before a substantial decrease in the number of neurons in Me5 and TG, as well as primary afferents in the TSNC. However, the number of primary afferents and neurons was significantly reduced in aged mice. A similar study by Byers and Dongs [17] reported that Me5 and TG neurons innervate the mechanoreceptors in periodontal ligaments. Another study conducted by Shigenaga et al. [18] showed that main projection of Me5 neurons’ central axons towards Su5. Su5 holds excitatory neurons and inhibitory neurons, considering the jaw closing motoneurons. This clearly suggests that both tooth extracted and aged mice suffer from disorder of jaw closing activity.s

The terminals to TSNC are formed from the primary afferents originating from TG, which further project to Mo5 through Sp50 [19]. The study further showed that primary afferents of intra-oral structure are received by dorsomedial part of Sp50; while, their neurons have widely spread axons and dendrites that project towards Mo5 [18]. The formation of di-or multi-synaptic segmental reflex pathway relates to Sp50 neurons that receive periodontal Me5 input. The presence of interneurons in rostrodorsomedial part of the Sp50 that corresponds to jaw opening and closing of motor neurons in Mo5 was investigated by Yoshida et al. [20]. The significant decrease in TG neurons was reported by Suemune et al. [16] after injecting HRP into the IAN. According to the findings, the decline in Sp50 terminals in the osteopetrotic mouse arises as a consequence of the normal decrease in sensory feedback to Sp50 through TG from periodontal sensory endings. Similar results have been deduced by the experimental model in the current study for labeled primary afferents in TSNC. These results clearly show that normal individuals may also suffer from severe disorder of mastication induced by tooth loss. Kobayashi et al. [21] stated that formation of masticatory rhythm is not inhibited in osteopetrotic mice, as normal masticatory rhythm can develop in normal animal as early as the weaning period.

The current study has provided a stabilized model to examine the survival and death of sensory neurons with progressing age and injured periodontal mechanoreceptive afferents after tooth loss. The sensory feedback from periodontal mechanoreceptive afferents is specifically suggested in developing and maintaining the masticatory system. Many investigations have been conducted previously on the association of different factors with low mastication ability.

Availability of Data and Materials

The datasets used and analyzed during the current study are available from the corresponding author on reasonable request.

The author declares no competing interest.

This research is not funded by any resource.

The author is very thankful to all the associated personnel in any reference that contributed in/for the purpose of this research.