Circulating tumor cells (CTCs) are shed into the peripheral blood from primary and metastatic tumor mass. Their isolation and subsequent molecular analysis hold promise for the cancer diagnostics, therapeutics, and prognostics. So far, several platforms have been developed for detection and isolation of CTCs. However, none of them have unequivocally shown clinical validity. Recently, high-throughput content screening technology has been used to exam unpurified cell populations. In brief, nucleated cells from peripheral blood are enriched onto substrate surfaces and subjected to examination. This method has great potential towards enabling unbiased analysis of CTCs. In pretreatment, fixed cells can be stained and then attached; in the other scenario, viable cells are attached, fixed and stained. Here, we have compared the two methods on Poly-Llysine and amino silane functionalized surfaces. Our results show that viable cells can achieve approximately 98.7% binding yields on silane-coated surface within 30 min incubation at room temperature. The CTC detection platforms based on high throughput screening would benefit from this conclusion.

Tumor cells which are shed from the primary tumor mass, circulate through peripheral blood, and establish distant metastatic lesions in other organs [1]. The elucidation of this process holds the key to understand cancer metastasis and is expected to play a vital role in future cancer diagnosis, prognosis and therapy [2]. Thus, platforms that can detect CTCs are highly desirable for routine tumor analysis. Several strategies have been used to process blood for analysis of CTCs. The existing methods fall into two categories: biological and physical. Approaches based on bioaffinities yield high specificity [3]. However, their reliability and sensitivity has been questioned. For instance, CTCs may not express epithelial cell adhesion molecules (EpCAM), a membrane marker widely used for CTC isolation and detection, resulting in a false-negative [4]. Since there is currently no universal marker that can be used to isolate and detect all CTCs, biological methods are therefore inherently biased. Moreover, the detachment of isolated CTCs from devices while keeping them viable poses a significant challenge [5]. On the other hand, physical methods mainly exploit differences in size, density, and deformability between CTCs and blood cells [6]. They are label-free and present excellent flexibility in subsequent characterization of CTCs [7]. However, metastatic cancer cells exhibit great changes in transit velocities, suggesting that not only increased deformability but also reduced friction [8]. Hence, physical methods may not be reliable in CTC isolation and detection either. Together, none of them have unequivocally shown clinical validity or utility, and most of these methods remain in the laboratory settings [9]. Recently, CTC detection approaches that combine high-throughput content screening technology with unpurified cell populations have been developed [10-12]. These methods have great potential towards enabling unbiased routine clinical analysis of CTCs. In general, all nucleated cells are attached onto substrates and subjected to scanning by cell imaging system. Enumeration and molecular characterization of CTCs can be achieved by imaging probe-labelled ligands that can interact and bind to the cancer specific protein markers. In pretreatment, cells can be fixed, stained and attached [13]. In the other scenario, cells are attached, fixed and stained, successively [14]. Here, we compare attachment efficiency of viable or fixed cells on poly-Llysine (PLL) and silane functionalized surfaces, respectively. Our results show that 98.7% of viable cells can quickly attach onto 3-aminopropyltriethoxysilane (APTES) coated glass slides in 30 min. It is concluded that attachment of viable cells onto silane modified surface facilitates precise enumeration of CTCs.

The surface chemistry of the samples was characterized using X-ray photoelectron spectroscopy (XPS) using a Kratos AXIS Ultra DLD X-ray photoelectron spectrometer with a monochromatic Al Kα X-ray source and a hemispherical analyser. The pass energy was 20 eV with a resolution of 0.3 eV for high-resolution spectra. Spectra were collected at a photoelectron takeoff angle of 90°. Binding energies were referenced to the C1s hydrocarbon carbon peak at 285.0 eV to compensate for surface charging effects. The zeta potential of each sample dispersed in 1 mM KCl solution (pH 7) was measured with Zetaspin (ZetaMetrix). The rotation of the disk followed a sinusoidal pattern from zero to 4000 rpm. The electric conductivity and the streaming potential were measured for calculation of the Zeta potential.

A549 cell lines were cultured in DMEM supplemented with 10% FBS, penicillin: streptomycin 100 U/mL and plated in T-25 tissue culture flasks. Flasks were placed into an incubator maintained at 5% CO2 at 37°C and 10% humidity. Cells were harvested by incubating with 0.25% trypsin for 5 min at RT, mixed with media to deactivate trypsin, collected using centrifugation, and resuspended in DMEM at desired concentration.

To determine the yield of binding on two samples, 1× 104 viable or fixed A549 cells in 500 μL of 1× PBS were added into the PLL-G or APTES-G and incubated for 15 min, 30 min, 1 h and 2 h at RT. The slides were washed gently to remove unbound cells. The attached viable cells were fixed with 4% paraformaldehyde for 1 h at RT. 20 representative images (×10) were randomly taken for each sample with an optical microscope. Cell numbers per image were analyzed with Image-Pro Plus software, and the resulting cell densities (number of cell per mm2) were calculated. The binding yield was defined as the number of cells bound to the glass slides surface divided by the initial seeded cell number.

XPS elemental analysis showed a significant increase in the N atomic percentage after surface functionalization, from 0.59% of bare glass (Bare-G) (Fig. 1A) to 1.11% of PLL-G (Fig. 1B), and to 2.41% of APTES-G (Fig. 1C), confirming that the expected surface coating took place. Additionally, the nitrogen composition of APTES-G was higher than that of PLL-G, indicating more amine groups were attached onto APTES-G. First of all, the size of PLL residue is larger, resulting less number of residues and less amine gropus per unit area. Moreover, PLL may delaminate when the salt from 1× PBS buffer continuously impairs the electrostatic interactions between PLL and hydroxyl groups containing surface. In contrast, the APTES self-assembled monolayer can be covalently grafted onto glass substrate. The hydroxyl group hydrolysis with methoxy groups present in the alkoxysilane of APTES to get terminal amine groups on the surface.

Thus, such surface immobilization is more stable. The positive potential has resulted from protonation of amino groups. The zeta potential of the PLL-G and APTES- G was analyzed. Piranha treated Bare-G have full silanol groups, and thus the zeta potential was -85.6 mV. It increased to 52.7 mV and 81.2 mV, respectively after PLL and APTES modification. The reverse change of zeta potential was caused by appearance of amine groups on the surface, and their quantity directly determines the zeta potential value. As mentioned before, PLL coated glass had less amine groups, and thus zeta potential was only 52.7 mV. In addition, in PLL residue one amine group made an ionic bond to a glass surface, and the other on the surface of the coat film was available for cell adsorption. Together, surface characterization results revealed that PLL-G may provide relative weak electrostatic force for molecule adsorption.

Viable or fixed A549 cells were incubated on PLL-G and APTES-G, respectively for up to 2 h. Cell binding efficiency at 15 min, 30 min, 1 h and 2 h time points is shown in Figure 2. Since APTES-G surfaces were positively charged and the zeta potential was higher than that of PLL-G, more cells were observed on APTES-G surfaces. After only 30 min incubation, approximately 98.7% of cells bound onto APTES-G surfaces compared to 89.3% cell attachment on PLL-G surface after 2 h incubation. Furthermore, compared to fixed cells (PLLG + F and APTES-G + F), viable cells (PLL-G + V and APTES-G + V) at each time point always achieved higher binding yields. Fixed cell obtained the highest binding yields, approximately 81.5%, on APTES-G after 2 h incubation. Significant number of cells were still suspended in solution and did not show any trend of at tachment. In contrast, about 99.4% viable cells attached onto the APTES-G surface at the same time point. The significant difference can be attributed to cell viability, insufficient surface positive charges, and cell damage. Firstly, fixed cells lost cellular viability and thus were unable to actively attach onto substrate surfaces, but slowly deposited onto the substrate merely via gravity. Contrarily, viable cells not only can form pseudopodia on the surface but also arrange focal adhesion that facilitates cell adhesion.[16] Secondly, although APTES-G surfaces were positively charged, the electrostatic adhesive forces might still fail to resist shear stress during eluting. Lastly, cells were fixed in solution, washed and collected by additional centrifugation. These additional steps could damage cell, cause loss of protein components, and lower cellular density. These damaged cells may stay in suspension due to their small density and levitating forces. In real practice, fixed cells will be subject to penetration, washing, multi-rounds of staining and centrifugation. The whole process may make the situation worse. On the contrary, these adverse factors can be completely eliminated or minimized in viable cell attachments. Therefore, viable cells achieved higher binding yields. 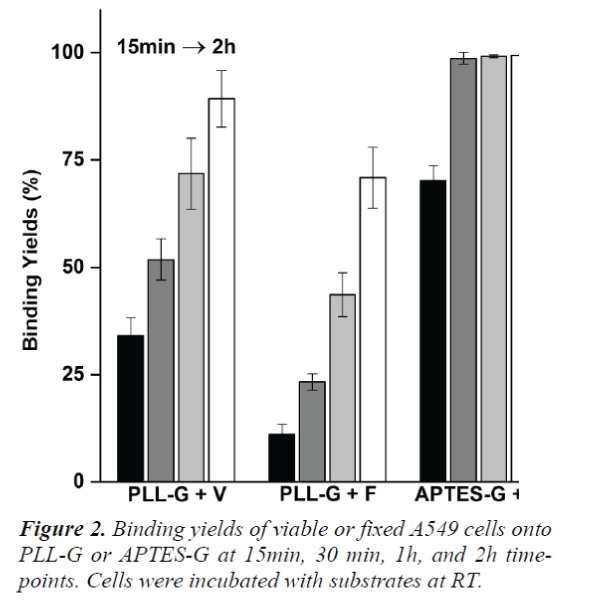 Figure 2: Binding yields of viable or fixed A549 cells onto PLL-G or APTES-G at 15min, 30 min, 1h, and 2h timepoints. Cells were incubated with substrates at RT.

We demonstrate that APTES functionalized surface is better than PLL coated one for nucleated cell attachment. Viable A549 cells can rapidly attach onto silane- grafted surface within 30 min. Moreover, our results proved clear evidence that the routine of cell seeding, fixation and staining is superior to the other routine of cell fixation, staining and seeding. In future work, 5-10 ml of peripheral blood can be treated with red blood cell (RBCs) lysis buffer to completely remove RBCs while the rest of the nucleated cells including CTCs can be enriched onto APTES functionalized surface for following staining and cell imaging analysis.