In the present study 25 patients of Parkinson disease (PD) under treatment, between 40-80 years, of both sexes with the written informed consent were selected and compared with age and sex matched 25 healthy individuals as controls. An attempt was made to study the role of blood reduced glutathione (GSH), Glutathione-S- transferase (GST) and γ-Glutamyl transpeptidase (GGT) in PD. The results showed a decrease in GSH (p<0.01) and GST (p<0.05) with an increase in GGT (p<0.01), according to students unpaired ‘T’ test, which may be a reflection of changes in the substantia nigra associated with PD.

Parkinsons disease is a slowly progressing neurodegenerative disorder which is characterised pathologically by the loss of pigmented neurons from the substantia nigra. The etiology of this degeneration is unknown. However, endogenous radicals generated by hydrogen peroxide [1]. Toxic α,β-unsaturated aldehydes which could react with reduced glutathione (GSH) [2-4] or metabolic compounds of the catecholamine metabolism such as 5-S-cysteinyldopamine [5] and 6-hydroxydopamine could all potentially trigger Parkinson’s disease. Toxic compounds formed in the brain are normally inactivated by various protective mechanisms. These mechanisms, however, may be impaired in PD. The evidence available points to free radical mechanisms involving the altered mitochondrial function, and an impairment in glutathione systems features which may potentially be related to the mechanism of cell death in PD. So, this is an attempt to study the role of blood reduced glutathione (GSH), Glutathione-S-transferase (GST) and γ-Glutamyl transpeptidase (GGT) in PD.

25 patients of PD under treatment, between 40-80 years, of both sexes with the written informed consent were selected and compared with age and sex matched 25 healthy individuals as controls. 5ml of blood was drawn under aseptic conditions and collected in EDTA bottles. 0.2 ml of whole blood was used for reduced glutathione estimation by Earnst Beutler method [6]. Rest of the blood was centrifuged immediately at 3000 rpm for 10 minutes to separate plasma. Plasma GST was measured by spectrophotometric method as described by William et al [7] and GGT by the method of Persijin and Slik [8].

Statistical analysis was done according to students un-paired ‘T’ test. 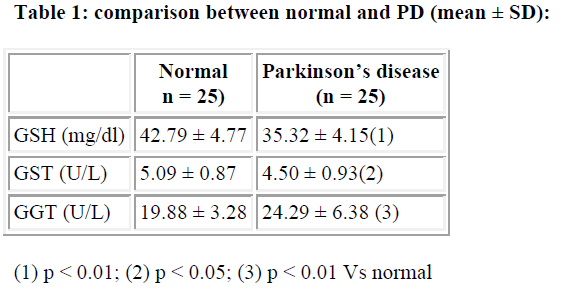 The primary pathology of Parkinson’s Disease (PD) is the degeneration of dopamine containing pigmented neurons in the brain. The chemical and enzymatic metabolism of dopamine itself may give rise to a range of free radical species. The autooxidation of dopamine and subsequent polymerization to produce neuromelanin may form free radicals through the formation of toxic semiquinone derivatives or by the production of other potentially toxic species namely 6-hydroxy dopamine. The evidence available points to free radical mechanisms involving the altered mitochondrial function, and an impairment in glutathione systems features which may potentially be related to the mechanism of cell death in PD.

Accumulating evidence implicates free radical formation and oxidative stress as a part of the pathology of PD. Findings of some workers suggests that the depletion of GSH initiates a chain of events which eventually results in oxidative damage sufficient to cause cell death and glial cells are important targets. Perry and colleagues [9] reported a decrease in the levels of GSH in PD and suggested that this was due to its utilization by some toxin accumulating within the substantia nigra. The observed decrease in the whole blood GSH may reflect enhanced detoxification of H2O2 by the action of glutathione peroxidase. An alternative explanation is that there may be alteration in the metabolism and translocation of GSH [10].

GST prevents the formation of neurotoxic aminochrome and dopachrome by catalyzing the conjugation of dopamine and dopa-o-quinone with reduced glutathione. The conjugates remain resistant to oxidation by free radical and GST catalysed reaction may serve neuroprotective antioxidant function [11]. This may be the underlying cause for the observed decrease in the plasma GST levels.

There was a significant increase in the plasma GGT level. This enzyme is associated with the degradation and cellular translocation of GSH, suggesting that some alteration occurs in its elimination. Precisely why this change occurs in the enzyme activity is not clear, but there may be analogies to the action of methyl phenyl tetra hydropyridine (MPP) on glutathione system in hepatocytes. De Monte and colleagues [12,13] have shown that MPP and other nonselective mitochondrial poisons cause a decrease in the levels of GSH in hepatocytes, in the absence of any increase in the oxidized glutathione. This has been interpreted as being due to a decrease in the pool of GSH caused by the interference with cellular energy metabolism and to increased efflux of reduced glutathione from the cells. These studies would suggest that the fall in the level of GSH in PD may result from some undetected mitochondrial impairment [14].

Upregulation of GGT has been reported in PD substantia nigra has been hypothesized to play a role in subsequent mitochondrial complex I inhibition by increasing cysteine as substrate for cellular uptake and as a consequence of GSH depletion. This suggests that increased GGT activity is likely an adaptive response to the less of GSH to conserve intracellular content and results in compensatory effect on complex-I activity (15). The results of our study showed an increase in serum GGT and a negative correlation of GSH with GGT. These reports are consistent with previous reports.

Our results suggests that there may be an imbalance in GSH system leading to excessive ROS, as indicated by decreased GST and GSH activity. Increased GGT activity may reflect a compensatory mechanism to provide dipeptide precursors to generate more GSH.