Strength of the hand grip is often used as an indicator of overall physical strength [1,2], general health status [3], hand and forearm muscle performances [4] and as an index of nutritional status [5,6]. Hand grip strength can be used in both children [2,5,7] and adults [1,3]. It is influenced by many factors including age, gender, handedness, motivation, position of extremity during test and body size [8-11]. In several studies, it is shown that anthropometric variables, such as height, weight [2,12-15], hand length [16,17], hand width [17], body mass index [2], body surface area [12] correlate with grip strength.

One of the problems encountered in comparing the strength measurement is allowing for the effect of body size. Body size is an important factor in determining individual's muscle strength, but how strength measurements should be normalized for differences in body size are controversial [18]. Various scaling models have been used for the normalization of performance measurement. The most widely used of these models are ratio scaling, linear regression, ANNOVA and allometric scaling [19]. Allometric scaling is the most accepted model to normalization of data through the removal of the direct influence of body size [20,21]. Allometric scaling is the nonlinear regression model fitted to data set [22]. In this model, it is believed that relationship between depended (performance or physiological variables) and independent anthropometric variables is curvilinear and passes through the origin [23].

A total of 130 child athletes from basketball, volleyball and handball (65 girls and 75 boys) volunteered to participate in this study. Physical characteristics of girls and boys are presented in Table 1. Age, height, right and left arm volume of the boys were similar to girls while body mass of girls significantly higher than those of boys (p<0.05). Subjects were informed about the study and signed informed consent form. Before the data were collected participants were familiarized with test procedures.

Heights of the children were measured by a wall-mounted stadiometer (Holtain Ltd, Crymych, Wales). Body mass was measured by using a scale (Tanita HD 358 Japan) with participants wearing short and T-shirt.

The volume of right and left arm was measured using a water displacement method. A cylindrical volumeter with a depth of 70 cm and a radius of 10 cm was used to measure the volume of the each arm as shown in Figure 1. The volumeter was placed on a flat surface and filled with warm water (25-28˚C) to the level of the spout. After the water stopped overflow from the spout, each arms of the participants were signed with a permanent pencil at the level of the axilla. Participants were immersed their arms into the volumeter and kept them in a vertical position. When the top of the volumeter contact with the axilla, participant was instructed to maintain their positions until the water stopped dripping from the spout. Overflow water was collected in a plastic container and measured with 500 ml graduated cylinder. All the volumetric measurements were taken between 09:00-12:00 a.m. 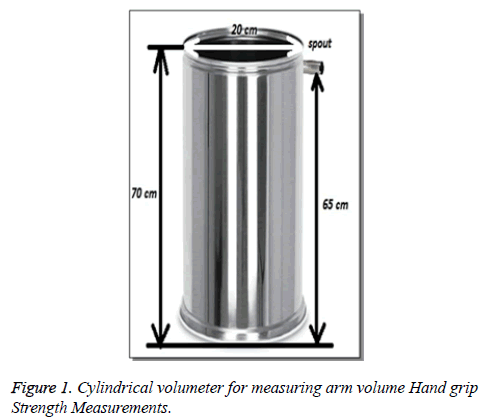 The grip strength of both right and left hands was measured using a digital hand dynamometer (TKK 5401, Takei Scientific Instruments, Japan) in a standing position with the shoulder adducted and elbow in full extension. The subjects were asked to squeeze the dynamometer with as much force as possible with both right and left hands. Three attempts were made by all subjects and the better performance was recorded.

95% confidence intervals of the b exponents of the terms included in the developed models were calculated. In addition, error terms of the models were analysed to check whether the strength variables were freed from body size. Kolmogorov- Smirnov One Sample Test was used to test the normal distribution of error terms. In all models, error terms were found to show normal distribution (p>0.05). Differences between the handgrip strength values of girls and boys were examined after the strength variables (independent variables) of the groups were free from the body size as a result of allometric model ((y/Xb) (y: Right Hand grip Strength (RHS) and Left Hand grip Strength (LHS); X: Body mass, Right Arm Volume (RAV) and Left Arm Volume (LAV), b: exponent)) [24].

A dependent t test was used to compare differences between the handgrip strength values (absolute, ratio-scaled and allometrically-scaled to body size) of girls and boys.

Ratio scaling method divides performance (i.e. strength) values directly by body size [29]. This is one of the methods mostly widely used to free performance variables from the effects of body size [22]. In other words, the purpose of this method is to normalize the performance increase brought by increase in body mass. This thought is supported by the following findings of the present study: strength values of girls are higher than those of boys in absolute terms, at a statistically insignificant level though, and strength values of boys are higher than those of girls when body mass factor is considered. However, ratio scaling method is criticised since it assumes a linear relation between the performance variables and body size and, as a result, produces disadvantageous results for those with heavier bodies (to penalize heavier individuals) [30].

Allometric scaling is another method used in analyses of performance values of groups. Allometric scaling method is the most valid approach which ensures data normalization by eliminating body size effects [20]. Since it removes scalinginduced performance score disadvantages of heavier individuals, it is more effective than ratio scaling method [24]. This study produced no statistically significant difference between the genders when strength values were scaled to arm volume both proportionally and allometrically. However, when the strength were scaled to body mass, strength values produced by boys were found to be higher than those of girls in both methods although the difference between the groups was reduced by the allometric method as shown in Tables 2 and 4. Some studies analysing the performance differences between groups suggest that performance difference between the groups decrease [19] and some other studies state that this difference totally disappears after allometric scaling [19,20,31]. However, these studies make comparisons on the basis of different performance variables (power, strength etc.).

When the handgrip strength of girls and boys aged 8-10 years was scaled to arm volume via absolute, ratio scaling and allometric scaling methods, no statistically significant difference was found between the groups, while boys were recorded to have statistically significantly higher handgrip strength values than girls when this strength is scaled to body mass. Although allometric scaling method decreased the strength value difference between the groups, it did not have any effect on the statistical results.