Obesity in combination with unhealthy life style may increase the risk of chronic diseases. Objectives: This study aimed to determine the gender difference of body composition and respiratory functions among medical students and its relationship with their life style. This study was performed on 165 male and female students. Body mass index (BMI) and body composition parameters were assessed using bioelectric impedance. Respiratory function, fasting blood glucose, lipid profile and sex hormones were assessed. A questionnaire was distributed among the participants to determine the association between the different variables and risk of obesity. The rate of overweight and obesity among male and female students were 16.9% and 15%. Overweight and obesity among male and female students were (24.6% and 21.3% vs. 12.1% and 11.1 %, respectively). Total fat mass and total fat percentage were higher in female students, whereas, free fat mass was higher in male students. The total fat percentage exceeded its normal limits in overweight and obese females and in 11.7% of those with normal BMI. High levels of total fat% were observed in obese and in 66.7% of the overweight male students. Thus, 37.7% in male and 35.6% in female students were obese according to the body fat percentage when used for defining adiposity rather than BMI. Forced vital capacity (FVC) was increased in male students and a positive correlation between FVC and free fat mass among male students was found. These data demonstrate that overweight and obesity are a problem among medical students of Taibah University.

The prevalence of obesity is increasing worldwide and it has become a significant health hazard. Obesity is associated with a large number of debilitating and life threatening disorders, such as cardiovascular, metabolic and other non-communicable diseases [1].

Studies on medical students in many countries suggested that obesity is a problem among these population groups. Children and adolescents who are overweight and obese, however, face a greater risk of health problems— including type 2 diabetes mellitus, high blood pressure, high blood lipids, asthma, sleep apnoea, orthopaedic problems and psychosocial problems—than their normal weight peers [2].

The present study aimed to determine the gender difference of body composition and respiratory functions in Taibah University and its relationship with their dietary intake and physical activities. Medical students represent the most crucial opportunity for education in the field of healthy lifestyles and nutritional habits.

A cross-sectional study was conducted over in January to April, 2014 academic year at the Faculty of Medicine, Taibah University, AL Madinah Al Monawarah, Saudi Arabia. The participants in this study were 165 healthy male and female students from the first and second academic years (37% males and 63% females). The participation was voluntary and a written informed consent was obtained from each subject, and the study protocol was in agreement with all Saudi Arabia University ethical standards.

A standard questionnaire was developed and distributed to the students after extensive literature review. A group discussion was conducted with other staff members to brainstorm and come up with a suitable data collection tool. The questionnaire was designed containing questions enquiring about age, gender, academic level, total sleeping duration per 24 h, frequency of exercise per week, type of exercise, eating habits, smoking and family history of diabetes and obesity.

Height was measured to the nearest 0.1 cm using a standard stadiometer. Body composition was measured by body composition analyzer type BC-418 MA TANITA (Japan). The participants were asked not to eat or drink within 4 hours prior to being tested. Participants were asked to void within 30 minutes prior to the test (with empty bladder) and students were asked to wipe off the sole of their feet before stepping onto the measuring platform as unclean foot pads interfere with the device conductivity. The participant standing on a metal footpad scale and gripping handles. After recording the participant’s sex, age and height; body mass index, total body water, basal metabolic rate, fat mass, fat free mass, truncal fat mass and truncal fat percentage were calculated and a report was instantly printed.

There were 165 responses from the total population of 200 students with a response rate of 82.5%. Study population was distributed as follows: male students totaled 61 (37%) and female 104 (63%). The mean age was 20.5±0.1 years, ranging from 18 to 24 years as seen in table 1. The students were distributed almost equally in the two academic years. 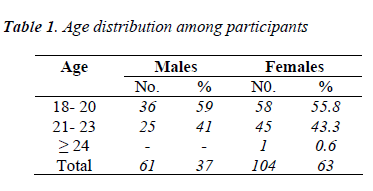 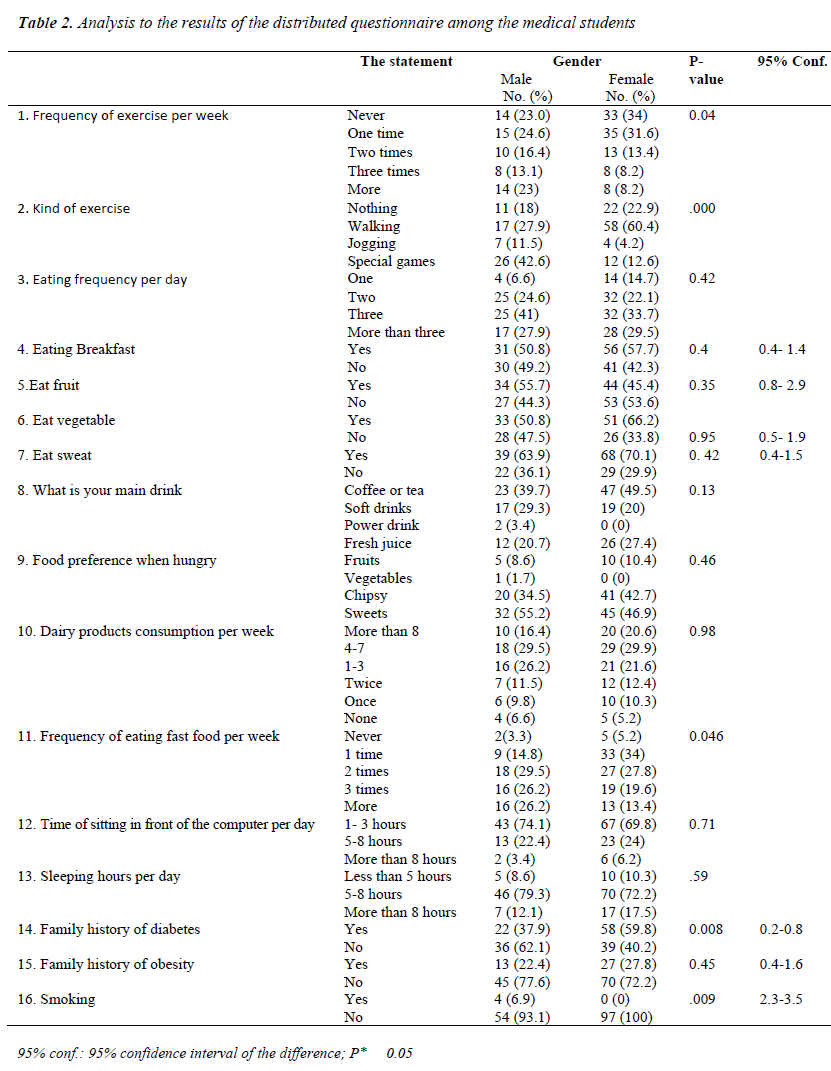 Table 2.Analysis to the results of the distributed questionnaire among the medical students. 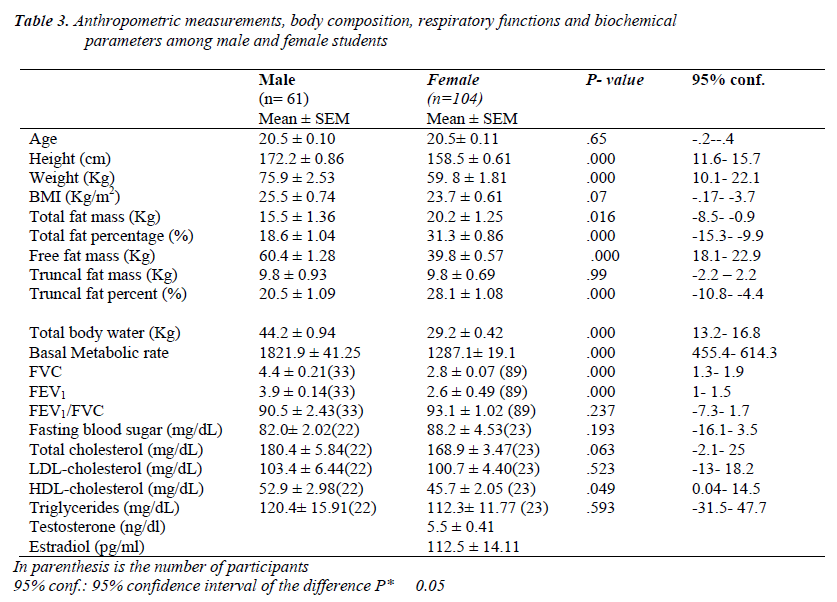 Table 4.Prevalence of overweight and obesity among medical students. 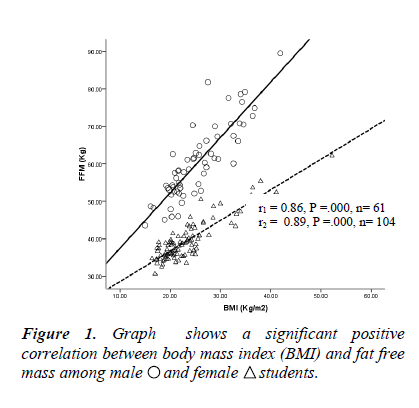 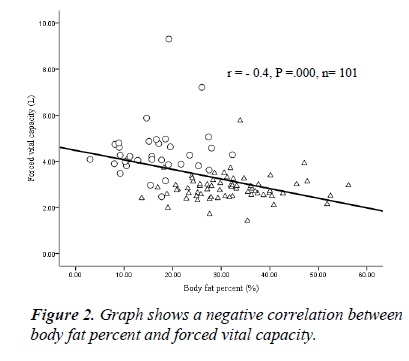 The presence of positive and significant correlations among the anthropometric measurements (BMI, free fat mass, total fat %) were found in this study. These significant positive correlations between BMI and both the fat percentage and the fat free mass indicate that BMI may be caused by gains in either fat weight or lean body mass. This indicates that BMI can’t distinguish between fat and muscle. The usage of BMI doesn't directly measure the amount of adipose tissue and cannot differentiate between fat and lean mass [12; 13].

The result of this study showed that the medical student diet includes high percentages of fat and small amounts of fruits and vegetables. This result is in agreement with the studies of [15, 19-23]. Abdel-Megeid et al. [14]; Ma et al. [24]; Forslund et al. [25] observed that sweets and fatty food increase the energy intake.

The study of the respiratory function showed that FVC and FEV1 were significantly higher in male students than females. This result could be contributed to the high free fat mass in male students and this is supported by the significant positive correlation between FVC and free fat mass among male students, and the negative correlation between body fat percent and FVC among medical students. All respiratory functions (FVC, FEV1 and FEV1/FVC) decreased in overweight and obese females compared to overweight and obese males. This result is in agreement with Banerjee et al. [26] who reported a decrease in respiratory function at increasing BMI in females than in males.

The findings of this study were limited by the use of a sample of students from just one faculty which may not be a representative of all students in Taibah University. Further studies with a greater number of students at different colleges are required. However, baseline information about BMI, body composition, eating habits and respiratory function among a sample of university students was obtained from the present study.

According to results obtained, the authors concluded that overweight and obesity are problems among Taibah University medical students. Overweight and obesity were more common among male students compared to females. The consumption of fruits and vegetables which are important to prevent chronic diseases was relatively low. Also, an ideal alternative is to use actual measures of body composition rather than of body mass. Increased BMI resulted in decreased respiratory functions in females than in males. These results indicated that medical students need nutritional and health promotion programs to improve their eating habits. It is also important to increase the awareness of eating fruits and vegetables to sustain a good health and to reduce the tendency of overweight and obesity, particularly among males.

The authors declare no conflict of interest in this study.