Extraction of oxygenated terpenes from potamogeton species that grows in Tigris river within Mosul city.

In the current study, a continuous soxhlet apparatus with a series of different polar solvent used for the preparation of crude extracts from the shoot of five species belonging to the genus Potmogeton are P. crispus and P. perfoliatus and P. pectinatus and P. nodosus and P. pusillus. This species noticed in Nineveh province on the right bank of the Tigris river at Hawy Al- Kanissa within Mosul city. That location which chosen for as an aim during the present study.

The active compounds of plants such as phenols, volatile oils, alkaloid glycosides and other compounds as important therapeutic agents. However, the content of these compounds varies depending on the growth and environmental conditions, plant parts and stages of development, and genotypes. Studies have indicated that genetic variation is the factor that directly affects the contents of the active ingredients [1].

The chemical compounds responsible for the color, taste and smell in plants are known as secondary plant metabolites or phytochemica, so this term is used in general to refer to the chemical substances that are built secondary during the metabolic processes carried out by the plant and are of vital importance in the life of the plant. It is worth noting that these compounds have been used for a long time as medicinal drugs through the use of medicinal herbs. There are many groups of secondary metabolites in the plant, such as alkaloids, tannins, terpenes, sterols, and others [2].

Terpenes are the largest family of compounds that are built by plants, and the term terpene was given to the compounds in a volatile liquid (terpenine), which was isolated from pine trees, and was originally used to refer to hydrocarbon isomers that have a molecular formula (C5H8) n However, there is a tendency to use a more general term, terpenoids, which also includes the oxygen derivatives of the hydrocarbons that make up the terpenes [3].

Terpenes are among the most widespread and chemically diverse groups of natural products, and although they have a variety of compositions, they are characterized by common features that are easy to identify, and through these features they can be classified, the basic unit of their composition is isoprene or isopentene, which consists of five Carbon atoms, and based on their content of those units, they contain several basic groups (Table 1).

Table 1. The classification of terpenoids is based on isoprene units.

Regarding the nature of these compounds, the monoterpenes and most of the cisco-terpenoids are essential oils under normal conditions. Because of its ability to evaporate and fragmentation, while Di-terpenes have high boiling points, so they are resins, while Tri-terpenes (contains of 6 isoprene units) includes steroids, saponins, sterols, and cardiac glycosides, while most of the Tetra-terpenes are carotenoids like β-carotene (The most common biological pigment in carrots) which is converted by enzymes into vitamin A [4].

On the other hand, terpenoids can be classified into carbonyl compounds, oxides, peroxides, alcohols, esters, phenols, acids and hydrocarbons.

Terpenes are found in most plant species, functionally, terpenes have different physiological, metabolic and synthetic roles, and among those functional terpenes are photosynthetic pigments and plant hormones that have regulatory activities for metabolic processes. In addition, many terpene derivatives have functions related to other organisms such as defense, production and symbiotic [5]. In general, some terpenes are often in the form of lipids dissolved in the cytoplasm of plant cells, while the aromatic types (volatile oils) are observed in special glandular cells located on the surface of the leaves, while carotenoids are specifically associated with chloroplasts in leaves and chromoplasts in petals petal [6].

In order to achieve the objectives of the study, samples were collected from a part of the Tigris River within the city of Mosul, which were distinguished by the abundance of aquatic plants growing there, as shown in Figure 1, where five species belonging to the genus Potamogeton were collected. They are: Potamogeton crispus, P. perfoliatus, P. pectinatus, P. nodosus, P. pusillus 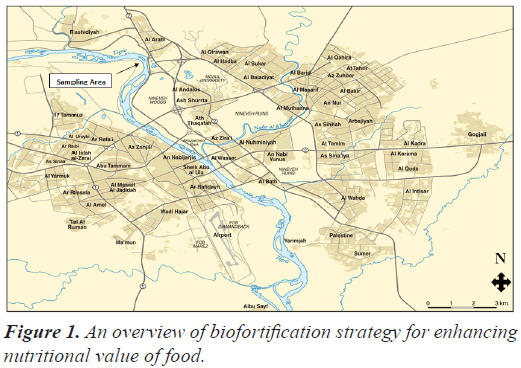 Figure 1: A map of mosul city showing the location of sample collection at the right coast.

The extraction process was carried out using the Continuous Soxhlet Apparatus, after drying the samples in the shade and then grinding and weighing them [7]. Four different polar solvents were used in the separation process: petroleum ether (60°C-80°C), benzene, chloroform, and ethanol 95%, Although the current study did not aim to quantify the compounds under study, However, we were keen to prepare the crude in equal concentrations in order to give an equal opportunity for the appearance of compounds during the separation process, So 16 grams of every vegetable powder dissolved in a liter of solvents mentioned earlier.

After the extraction, the solutions were concentrated to 160 ml (i.e. 1/10 ml) using (Rotary Vacuum Evaporator). Crude extracts were then stored in the refrigerator pending the separation on the TLC layer [6].

The separation process was done with the thin layer chromatocravia technique, by using sheets of German silica gel with the following specifications: Aluminum sheets , 20 × 20 × 0.2 cm , silica gel 60 and the separation was carried out after the plate was activated in the oven under 70°C and for 10 minutes.

Based on the Rate of flow (Rf) values of compounds, calculated according to the following formula

Oxygen compounds are derivatives of hydrocarbons to which the taste and smell of volatile oil is due. In most cases, they have a medical and physiological effect as well. They are either in the form of alcohols, aldehydes, ketones, phenols, esters, or any other form of oxygencontaining groups in their composition.

These compounds and other plant chemicals can be diagnosed using thin layer chromatography technique, which gives a good and direct picture of the number of these compounds and their polar properties, because different active compounds of plant give different Rf values in chemical separation systems, and these values are important in understanding the polarity of those compounds [6], who also mentioned that terpenoids can be isolated from plant tissues using petroleum ether or by chloroform, and then it can be separated after that by silica or aluminum plate chromatography technique by using the same solutions.

Studies indicated that silica gel layers give an efficient separation for most terpenes, so the principle stated [8] was adopted in the current study to separate a number of oxygen terpenes mediated by the thin layer chromatography technique, which includes the use of a solution consisting of ethyl acetate-chloroform (10-90, v/v) as a development [9].

The compounds were separated from the petroleum ether extracts of the species under study, by placing samples of them on the separation plate using fine capillary tubes. After drying the plate and spraying it with a reagent consisting of vanillin and concentrated sulfuric acid, the flow rate of the separated compounds was calculated, which amounted to 56 compounds (Table 2).

Table 2. Values of the Rate of flow (Rf) of the compounds that were shown on the thin layer chromatography plate during the process of separating some oxygen terpenes of the genus Potamogeton using Ethyl acetate-chloroform (10-90,v/v) as a mobile phase.

Eight of them were diagnosed (Table 3) by comparing the flow rate of each of them with the values of the corresponding standard compounds, and these compounds belonged to the group of oxygen terpenes, and their structural formulas are as shown in Figure 2.

Table 3. Values of the flow rate of some standard oxygen terpenes and the compounds diagnosed in the petroleum ether extracts of the genus Potamogeton using the solvent (Ethyl acetate-chloroform (10-90,v/v) as a mobile phase. 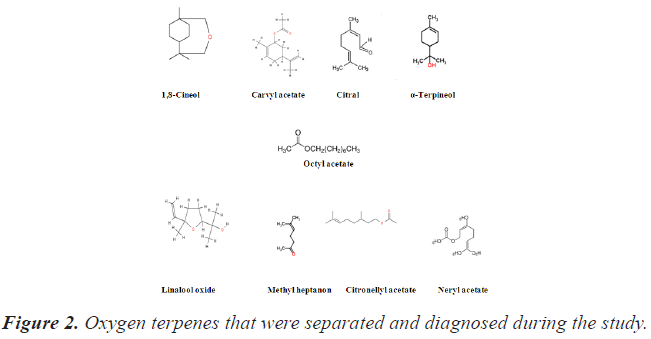 Figure 2: Oxygen terpenes that were separated and diagnosed during the study. 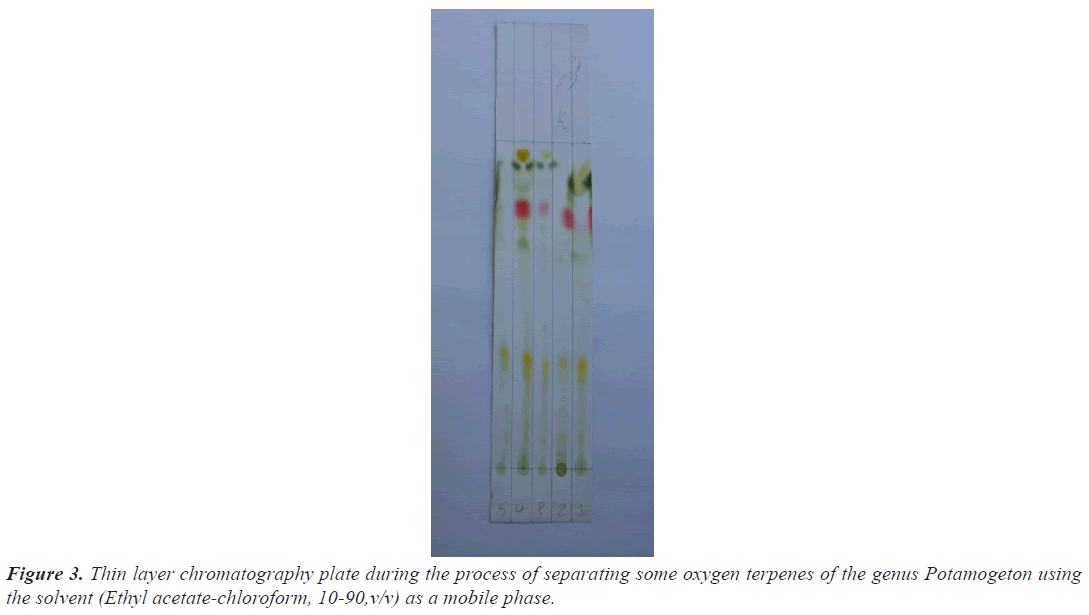 Figure 3: Thin layer chromatography plate during the process of separating some oxygen terpenes of the genus Potamogeton using the solvent (Ethyl acetate-chloroform, 10-90,v/v) as a mobile phase.

The results also showed that the P. perfoliatus had the lowest number of compounds that appeared on the separation plate, and it amounted to only five compounds, while the P. nodosus had the most number, reaching 14 compounds, and the extracts of this species were also distinguished by containing the compound 1,8-Cineol Which was not observed in the extracts of the other species under study.

In order to achieve the objectives of the study, five species belonging to the genus Potamogeton were collected. They are: Potamogeton crispus, P. perfoliatus, P. pectinatus, P. nodosus, P. pusillus, and the results also showed diagnose of eight of Oxygen terpenes by comparing the flow rate of each of them with the values of the corresponding standard compounds. The results also showed that the P. perfoliatus had the lowest number of compounds that appeared on the separation plate, and it amounted to only five compounds, while the P. nodosus had the most number, reaching 14 compounds. The extracts of the P. nodosus were distinguished by containing it on the 1,8-Cineol Which was not observed in the extracts of the other species under study.