Duchenne muscular dystrophy (DMD) is a severe recessive X-linked form of muscular dystrophy caused by mutations in the DMD gene located on the X chromosome,(Xp21). It is characterized by rapid progression of muscle degeneration, eventually leading to loss of ambulation and death. Dystrophin is the predominant DMD transcript expressed in striated muscle. DMD gene mutations, deletions or duplications most frequently result in loss of dystrophin expression in the muscle of these patients. Deletions are most commonly located in the 5' end and in the central region of the exons 44 to 52, of the gene. Application of Bone marrow derived mesenchymal stem cells represent a promising approach for supporting new clinical concepts of cell based therapy in regenerative medicine. The non hematopoietic component of bone marrow includes multipotent mesenchymal stem cells capable of differentiating into fat, bone, muscle, cartilage and endothelium. The present study was undertaken to assess the expression of Myogenin and CD105 in autologous bone marrow derived mesenchymal stromal cells of Duchenne Muscular Dystrophy patients. Ten DMD patients between 12 yrs to 24 yrs and 10 healthy controls were enrolled. With informed consent the bone marrow mononuclear cells were harvested, cultured and assessed for the expression of Myogenin and CD105 using Flourescence Activated Cell Sorter (FACS analysis). A significant increase in expression of Myogenin and CD105 was observed in the cultured autologous bone marrow derived Mesenchymal stromal cells of Duchenne Muscular Dystrophy patients. The expression of the above mesenchymal stem cell markers in patients with Duchenne Muscular Dystrophy indicate that autologous transplantation of bone marrow derived mesenchymal stromal cells could be of therapeutic potential.

Duchenne muscular dystrophy (DMD) is a severe recessive X-linked form of muscular dystrophy[1-3] characterized by rapid progression of muscle degeneration, eventually leading to loss of ambulation and death having an incidence of 1 in 3,500[4] newborn males.

DMD is caused by mutations in the DMD gene, which is located on the X chromosome.(Xp21)[5]. Dystrophin is the predominant DMD transcript expressed in striated muscle. DMD gene mutations, deletions or duplications [6] most frequently result in a loss of dystrophin expression in muscle of these patients. Deletions are most commonly located in the 5' end and in the central region of exons 44 to 52, of the gene.[7]

In DMD muscle because of lack of dystrophin, the Dystrophin associated Glycoprotein Complex (DGC) does not form in the sarcolemma. In a complex cascading process involving several pathways, increase in oxidative stress within the cell damages the sarcolemma, and eventually results in death of the cell. Muscle fibers undergo necrosis and are ultimately replaced with adipose and connective tissue.

The only pharmacological therapy shown to benefit DMD patients is corticosteroid treatment,[8] which is associated with significant side-effects. Promising research is being conducted to find a therapy able to mitigate the detrimental effects of this affliction. There are many avenues currently under intense investigation, including stem cell replacement therapy,[9] exon skipping [10] analog up-regulation, and gene replacement.

Multipotent stem cell, termed pericytes [11] are located within the blood vessels of skeletal muscle. These cells can be delivered systemically and be taken up by crossing the vascular barrier. Once past the vasculature, pericytes have the ability to fuse and form myotubes. Therefore they can be injected arterially, cross through arterial walls into muscle, where they can differentiate into potentially functional muscle.

Immunomodulatory properties of MSCs [17,18] have shown to have implications in the treatment of inflammation indicating that immunosuppression is not always necessary after MSCs transplantation. Furthermore, an “immune phenotype” of MSCs has been described by other cell markers: MHC I+, MHC II”, CD40", CD80", and CD44+, CD73+, CD90+, CD105+.

These findings show a potential for stem cell therapy of DMD. Hence the present study was undertaken to study the differentiation potential of MSC by looking for the expression of skeletal muscle markers, myogenin and CD 105 in autologous bone marrow derived mesenchymal stromal stem cells in duchenne muscular dystrophy patients.

The present study was carried out in the Department of Biochemistry, S.C.B Medical College, Cuttack. A total of 10 clinically confirmed DMD cases based on high creatine kinase (1977± 147.43), muscle grade 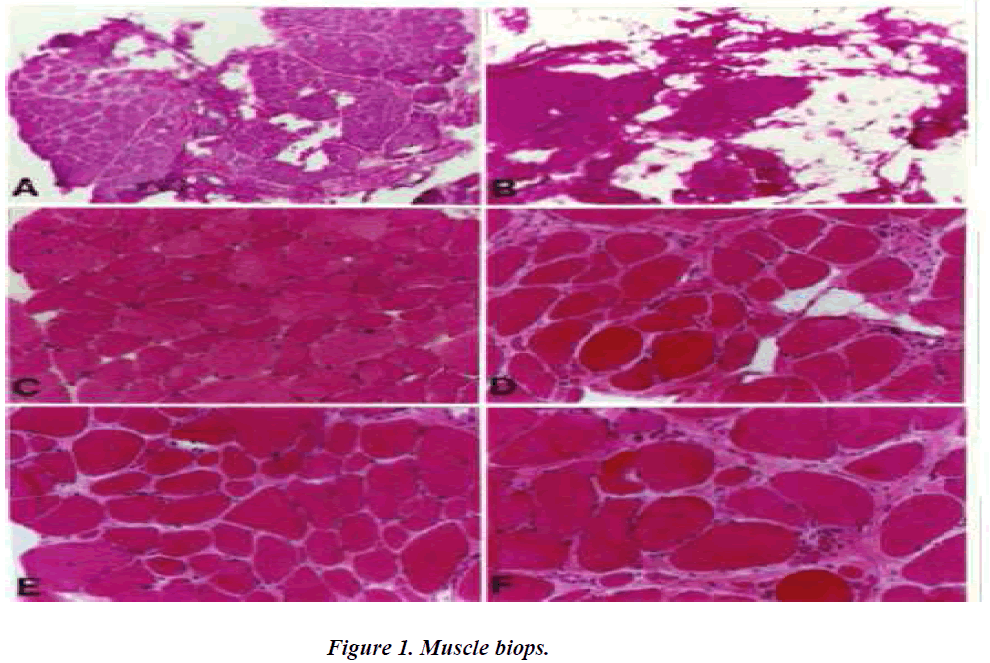 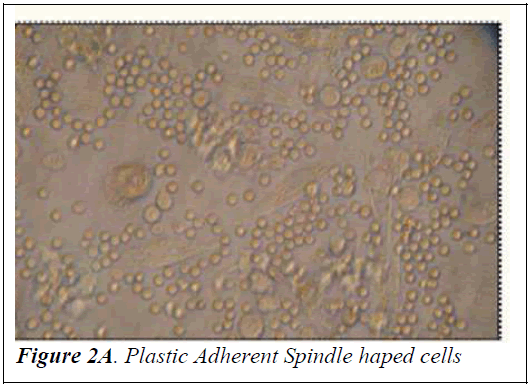 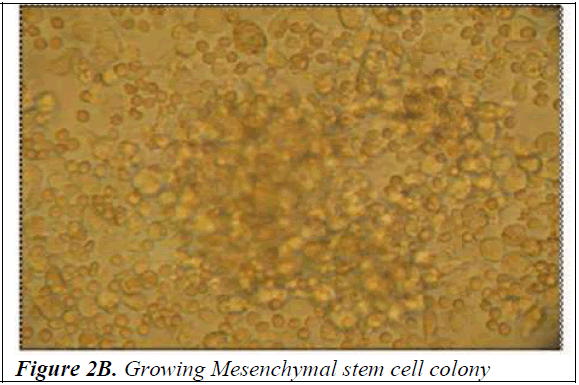 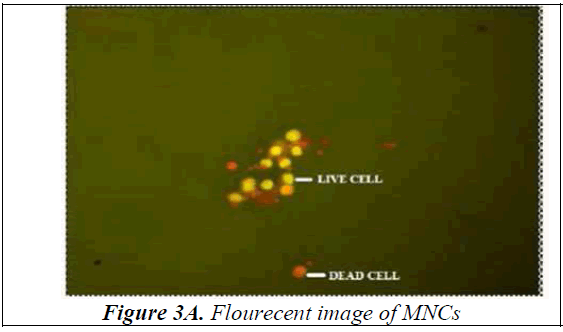 Figure 3A: Flourecent image of MNCs. 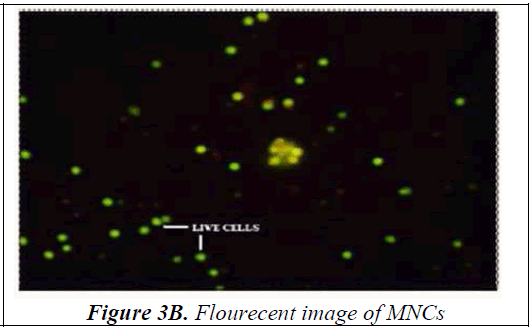 Figure 3B: Flourecent image of MNCs.

Culture of mononuclear cells The Mononuclear cells were washed with sterile Phosphate Buffered Saline (PBS) and then plated on gelatin coated T-25 filtered capped Nunc flasks in Dulbecco’s modified Eagle’s medium (DMEM) with high glucose (Himedia) supplemented with 10% fetal bovine serum (FBS) (PAA laboratories GmbH, Australia) and 1% penicillin-streptomycin (Himedia). The culture flasks were incubated at 37°C with 5% carbon dioxide for initial 4 weeks prior to trypsinizing for further analysis. Half of the media was replaced once every 3-4 days. After incubation for a fortnight, spindle shaped cells appeared (Figure 2A). At the end of 4 weeks the cells were trypsinized using 0.25% trypsin-0.2% EDTA and tested for the presence of mycoplasma using the Mycoplasma mycoalert detection kit (Cambrex Bio Science, Baltimore, MD) to detect any contamination. Photographs of mononuclear cells during the short term culture were taken with Leica Photomicroscope (Figure 2B).

Characterisation of mesenchymal stem cell staining. The cell surface antigen expression of cultured cells was used for the characterization of mesenchymal stem cell phenotype as well as to evaluate the property of the cells to differentiate into the myogenic lineage. To stain for cell surface antigens (CD105 and CD34), the cells were suspended in FACS staining buffer and stained with anti-human CD105-APC (Biolegend) and antihuman CD34- FITC (Biolegend) separately. To stain for intracellular proteins (MyoD and Myogenin) the cells were resuspended in fixation buffer for 20mins at room temperature after washing with PBS. They were then washed and incubated with anti-human MyoD, anti-human Myogenin and Mouse IgG (Isotype) for 30mins. Again the cells were washed and stained for cells surface and intracellular antigens and analysed using FACS. The intracellular stained cells were then incubated with anti-mouse secondary antibody tagged with FITC (Jackson immunologicals, USA) at 1:50 dilution with permeabilization buffer. These cells were then incubated with the secondary antibody for 30mins at room temperature before washing again. Finally they were suspended in FACS buffer prior to taking them for FACS analysis in FACS Caliber (BD Biosciences).

Instained cells and cells stained with isotype were taken as negative control for analysis. 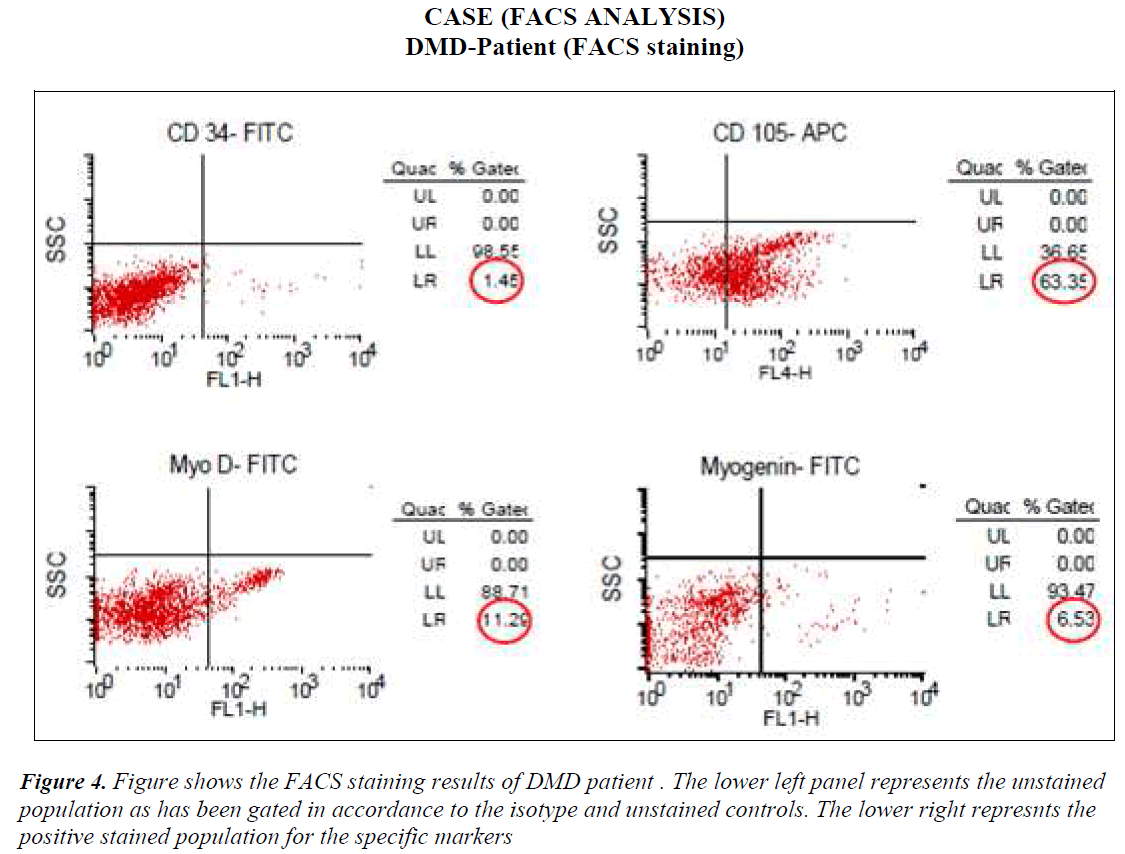 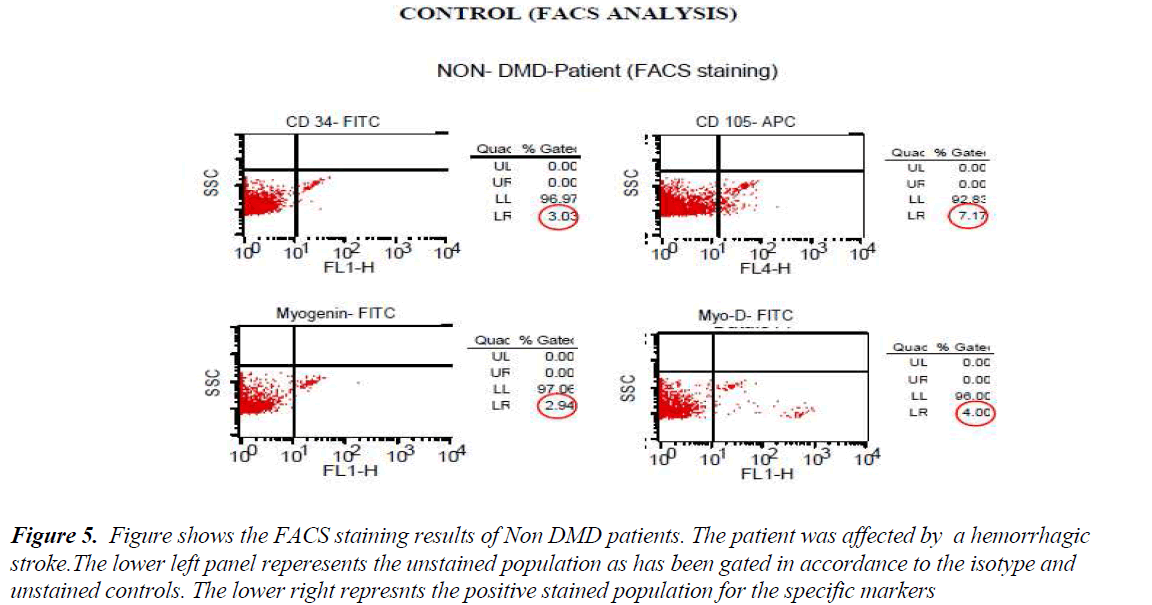 Figure 5: Figure shows the FACS staining results of Non DMD patients. The patient was affected by a hemorrhagic stroke.The lower left panel reperesents the unstained population as has been gated in accordance to the isotype and unstained controls. The lower right represnts the positive stained population for the specific markers

As shown in Table III, analysis of the stained cells by FACS revealed more number of cells positive for mesenchymal lineage (CD 105) in the bone marrow cells isolated from DMD patients, as compared to Non-DMD cases. In DMD patients, the mean CD105 count was 52.85 ± 9.32 % in comparison to Non- DMD patients where the count was 7.2 ± 1.62 % (p value < 0.001). There was a non significant difference in CD 34 cell count between DMD patients and Non-DMD cases. The significant difference in CD105+ population in DMD and Non-DMD cases was suggestive of the capacity of the mono-nuclear cells in preferentially differentiating into myogenic lineage in comparison to haematopoietic lineage. 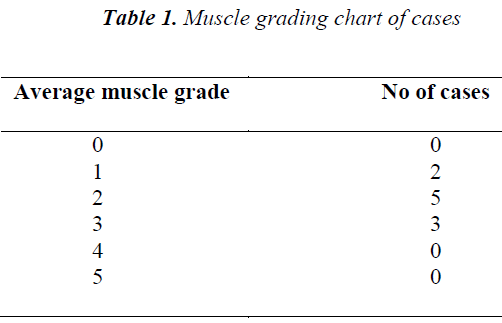 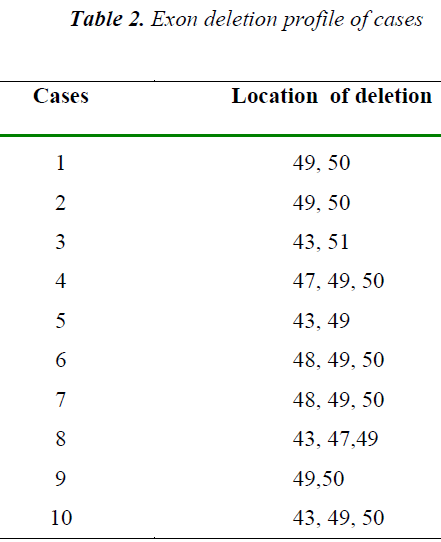 Table 3: Summary of FACS analysis of cases and controls.

Results of the above study indicate an underlying signalling mechanism that triggers the myogenic regenerative capacity of the bone marrow mononuclear cells in Duchenne muscular dystrophy patients in comparison with Non-DMD controls. This corroborates with the observation of Turk et al, who also depicted enhanced expression of specific muscle regenerative markers in DMD patients in comparison to Non-DMD cases [19].

There have been reports [20,21] stating autologus bone marrow transplantation as another mode of treating patients. Bone marrow being rich in stem cell population provided a good tool to enrich the regenerative capacity in DMD muscles. It has been shown that patients are given repeated shots of mononuclear cells isolated from bone marrow at regular intervals in order to maintain the strength of the muscles in DMD cases. In our study we have addressed this question and tried to explore the properties of the bone marrow from DMD and non- DMD cases along with their capacity in muscle regeneration in-vitro. This study would help in developing newer modalities enhancing the properties of the bone marrow stem cell, such that the patients need not be injected with mononuclear cells of bone marrow at regular intervals and would also give light in understanding the capacity of muscle stem cells or satellite cells, which would pave ways to understand the signalling mechanisms which could be exploited to enhance their regenerative capacity.

There are few possible target molecules which play the critical role in promoting the mono-nuclear cells isolated from bone marrow of DMD patients to differentiate in myogenic lineage specificity. Notch- Delta pathway is one of the plausible signalling pathway responsible for regulation of muscle regeneration in DMD cases. Previous work from Conboy et al [22,23] as well as Androutsellis- Theotokis A et al [24] and others, are strongly suggestive for a plausible role of Notch-Delta and Numb interplay. Understanding the interplay of the signalling pathways provides an insight in regulating the bone marrow cells as well as the satellite cells of the muscle tissue for enhancing the better regenerative potential. Bone Morphogenetic Protein (BMP) associated pathway proteins which are members of transforming growth factor-beta family, are turned on in –mdx mice, indicating a role in myogenic proliferation and differentiation [19]. Role of BMP has been well investigated in the neuromuscular junction in dystrophin deficient mice. Noordermeer’s lab has shown that BMP signaling is required at the neuromuscular junction in dystrophin deficient mice for releasing neurotransmitters. Expression analysis by Turk et al revealed BMP15 upregulation in dystrophin deficient mice. [19] Members of Epidermal Growth Factor-like (EGF-like) proteins are another family of proteins which remain un-elusive in muscle regeneration paradigm of mono-nuclear cells. Neuregulin 3 (Nrg3) and Erythroblastic leukemia viral oncogene homolog 4 (ErbB4) are couple of members belonging to EGF- like proteins which are up regulated in –mdx mice but not in control wild type mice.

Our study provides an important insight into the proliferative as well as differentiative capacity of the bone marrow mono-nuclear cells isolated from DMD and Non-DMD cases. The above findings answer the importance and advantages of autologus cell replacement therapy in patients with DMD. The basic understanding to the underlying mechanism would open up avenues for newer and better therapeutic modalities which would also eliminate side effects. Unraveling the signalling pathways playing role in regenerating the muscle may provide scope for enriching the muscle specific stem cell pool as well as enrich the satellite cell population in the muscle tissue.

Further studies to understand the difference in the mono-nuclear cells isolated from DMD and Non-DMD would provide interface for therapeutic intervention eliminating the need of repeated injection of isolated mono-nuclear cells. Ongoing research using stem cell as a cell replacement therapy in conjunction with exon skipping provides some clues for alleviating the DMD patient trauma. We hope our study would give scope on doing future research in not only alleviating the symptoms but also curing DMD.