Methods: Plasma samples were prepared using the blood extracted from 28 CAD patients and plasma samples of 28 healthy people as well as patients with a variety of different diseases. In addition, the heart tissues were collected from both the lesion area and surrounding healthy area of 7 patients with CAD. The expression levels of lncRNA Novlnc6 in plasma and heart tissue were detected using quantitative real time polymerase chain reaction (qRT-PCR).

Conclusion: The down regulation of lncRNA Novlnc6 in plasma can be used as a biomarker for the diagnosis of CAD.

Coronary Artery Disease (CAD), which is one of the most common types of heart disease, is a main cause of death all over the world [1]. In China, it has been reported that deaths caused by CAD accounted for 41% of all the cases [2]. In addition, CAD is also the main cause of failure in the treatment of a variety of diseases [3,4]. During the past two decades, due to the increased incidence rate of obesity and diabetes and the aging of the population, the incidence rate of CAD was also significantly increased [4]. Conventional treatment methods including drug treatment has been widely used in the clinical treatment of CAD, however, those treatments were challenged by the adverse side effects or the drug tolerance developed during the long-term application of chemical compounds and the high recurrent rate [5]. So it will be with great clinical values to develop early diagnosis method for patient with CAD to improve the treatment efficacy.

In recent year, more and more studies have shown that noncoding RNAs have pivotal functions in the regulation of tissue homeostasis and various pathophysiological conditions [6]. Long non-coding RNA (lncRNA) is a group of noncoding RNAs with a length longer than 200 nucleotides [7]. It has been well accepted that lncRNAs have essential functions in the onset and development of various human diseases including liver diseases, cancer, heart disease and so on [8-10]. LncRNAs MALAT1 and Tie-1-AS, which are mainly expressed in endothelial cells, were proved to be able to regulate vessel growth and function [11]. Previous studies have also shown that the specific lncRNAs that highly expressed in vascular smooth muscle were responsible for the contraction of smooth muscle cells [12]. Novlnc6 as a member of lncRNAs, was mainly expressed in cardiomyocytes and have regulatory roles in the expression of bone morphogenetic protein 10 (BMP10), which is a key signaling ligand involved in cardiogenesis, and Novlnc6 was also found to have essential functions in the progression of acute myocardial infarction, indicating the important roles of lncRNA Novlnc6 in cardiac development and disease [11,13]. Therefore, it will be reasonable to speculate that lncRNA Novlnc6 may be involved in the progression of CAD.

The whole blood was collected from all the patients and was mixed with 10% sodium citrate immediately after extraction, followed by centrifugation (2000 rpm) at 4°C for 10 min to remove the blood cells and collect the plasma. A total of 100 ml plasma was obtained form each CAD patient. The plasma was aliquoted into Eppendorf tubes with 500 μl in each tube. All the plasma samples were stored at 4°C before use. The heart tissue was collected from each patients and healthy control. All the tissue samples were stored at -80°C before use.

SPSS19.0 software used to analyze all the data. The comparisons between groups were performed by t-test. p<0.05 is statistically significant. 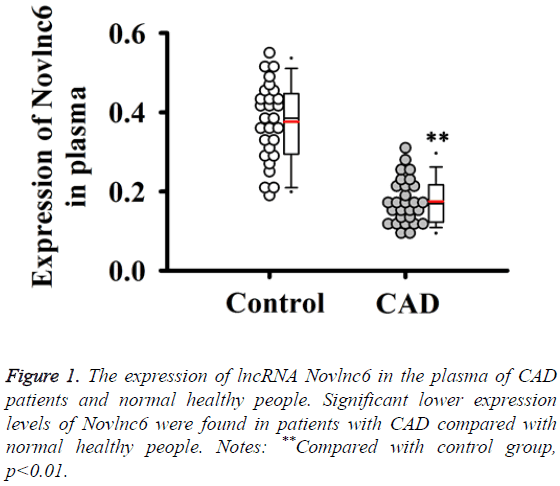 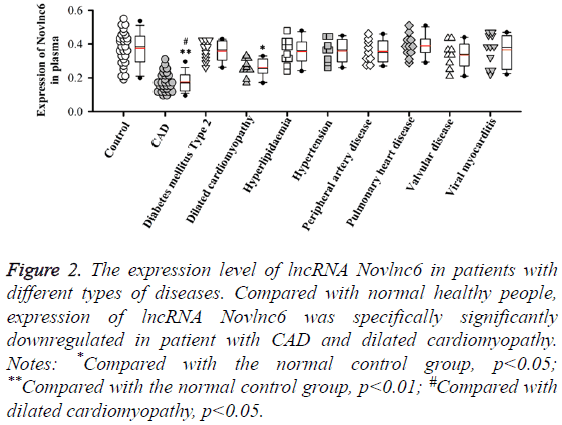 The stability of lncRNA Novlnc6 in the plasma of CAD patients 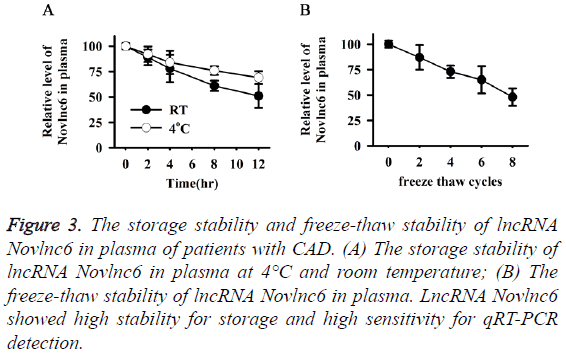 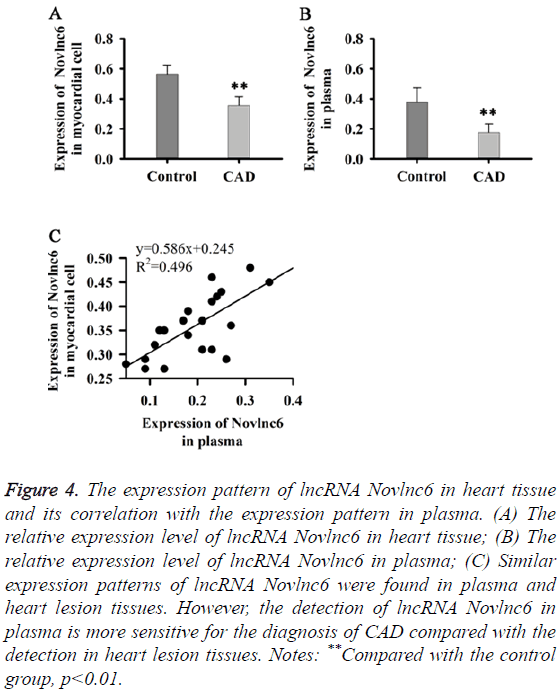 The treatment of CAD is challenged by the drug tolerance developed during the long-term application of chemicals and the high recurrent rate. Therefore, the early diagnosis and in time treatment is urgently needed to promote the treatment efficacy of CAD. Biomarkers are tools that are used to better identify individuals with high-risk of certain disease or physical condition [14]. A recent study showed that the levels of oxidative stress induces secretion of Cyclophilin A (CyPA) in plasma of the CAD was increased with the increased severity of CAD and decreased after proper treatment, so the upregulated expression of CyPA can be used as an indicator of CAD [15]. Another study showed that several miRNAs including miRNAs in miR-17/92a cluster, miR-106b/25 cluster, miR-21/590-5p family, miR-451 and miR-126* were differentially expressed in CAD patients and normal healthy patient, and the differential expression of those miRNAs can be used to distinguish the patients with high-risk of CAD from the ones with low risk [16]. However, the application of those biomarkers is still limited by the individual differences in detection. Therefore, more biomarkers are still needed.

It is well accepted that lncRNAs are involved in the progression of cardiac disease. With the development of Genome-Wide Association Study (GWAS), heart failure was found to be correlated with the expression of multiple lncRNAs. It has been reported that six Single-Nucleotide Polymorphisms (SNP), which were mapped to the lncRNA Myocardial Infarction-Associated Transcript (MIAT), were positive correlated with the incidence of myocardial infarction [17]. LncRNAs were also reported to be involved in the cardiac event by regulating the expression of related genes. The normal cardiac functions depend largely on the correct activities of potassium channel [18]. A recent study has shown that the transcription of potassium voltage-gated channel subfamily Q member 1 (Kcnq1), which is a potassium channel encoding gene, is regulated by the expression of lncRNA Kcnq1ot1 [19]. The lncRNA antisense non-coding RNA in the INK4 locus or CDKN2B-AS1 (ANRIL), which is on the human chromosome 9p21, was the first lncRNA proved to be able to contribute to the susceptibility of CAD [20]. ANRIL can recruit protein regulator of cytokinesis 1 (PRC1) and PRC2 to regulate the expression of genes in INK4b-ARF-INK4a cluster, which in turn regulate the progression of CAD and different types of cancer [21]. LncRNA Novlnc6 was a newlyidentified heart-specific lncRNA that has potential functions in both the cardiac development and pathogenesis of cardiac diseases [22]. Novlnc6 was reported to be able to regulate the expression of Nkx2.5, which is a key cardiac transcription factor, and the knockdown of Novlnc6 in cardiomyocytes can significantly inhibit cardiogenesis [23]. In addition, the expression of Novlnc6 was always found to be downregulated in the patients with dilated cardiomyopathy [22]. Consistent results were found in our study. The reduced expression levels of Novlnc6 were found in patients with dilated cardiomyopathy but not in patients with other diseases, such as diabetes mellitus, dilated myocarditis, hyperlipidaemia and so on. However, the expression of Novlnc6was also decreased in patients with CAD and the decrease was more significant than that in dilated cardiomyopathy patients, indicating that the downregulation of Novlnc6 expression is more specific for CAD.

Specificity, sensitivity and stability are three important factors in the application of a specific biomarker [24]. The high specificity will be helpful to avoid the cases with false positive signal. High sensitivity is required to reduce the cost of detection and high stability is import for the cases where timely detection is unavailable [24]. As mentioned before, the downregulation of Novlnc6 expression is specific for the patients with CAD, indicating the high specificity of Novlnc6 to serve as a biomarker of CAD. The following experiments showed that Novlnc6 could be still detected by qRT-PCR after storage for 12 h at room temperature or 4°C. In addition, the RNA of Novlnc6 was still detectable after 8 cycles of freezethaw. All the data suggest Novlnc6 as a novel biomarker of CAD which has satisfied specificity, sensitivity and stability.