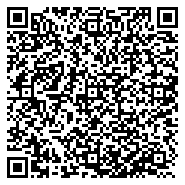 Ovarian Cancer (OC) is one of the common malignant tumours occurred in female genital organs, and its incidence rate is only second to cervical cancer and uterine body carcinoma, ranking the third among malignant tumours of female genital system [1]. Epithelial Ovarian Cancer (EOC) is one of the most common cancers in all ovarian cancers, approximately accounting for 80%~90% of all ovarian cancer pathological types [2]. Phosphatidyl inositol 3-kinase/protein kinase B (PI3K/AKT) is an important signal transduction pathway that participates in the regulation of cell survival, which could antagonize cell apoptosis, promote cell proliferation and survival, etc. Its abnormal expression and excessive activation are correlated with tumorigenesis, tumor progression and drug resistance, etc. [3]. Phosphatase and tensin homology deleted on chromosome ten (PTEN), firstly discovered in 1997, is the only cancer suppressor gene both has the lipoprotein lipase and phosphatase activities synchronously to date, and it can play regulation roles on cell proliferation, apoptosis, migration and differentiation and other various biological processes via the negative regulation on the PI3K/AKT signal pathway, which can play roles on in promoting the cell proliferation and cell survival [4]. Decreased expression of PTEN or function defect and excessive activation of PI3K/AKT signal pathway are correlated with multiple tumors, such as, lung cancer [5], Esophageal cancer [6], Breast cancer [7], Colorectal cancer and so on [8]. Studies indicated that the expression of PTEN in tumour tissues was significantly decreased in patients with the ovarian cancer, suggesting that PTEN acts as the cancer suppressor gene in the onset of ovarian cancer [9]. Being a single-stranded non-coding micro molecular RNA that is endogenously expressed by organisms in the length of approximately 22~25 nucleotides, microRNA inhibits the translation of mRNA or degrades mRNA via complete or incomplete complementary pairing with 3'-untranslated region (3'-UTR) of the target gene mRNA, so that the expression of genes could be negatively regulated at the level of post transcription [10]. A number of studies have reported that [11-13] the expression of miR-25 in tumour tissues or ovarian cancer cell lines was significantly increased in patients with the ovarian cancer, indicating that the increased expression of miR-25 may act as the carcinogenic gene in the onset of the ovarian cancer. Bioinformatics analysis shows that there are complementary pairing binding sites between miR-25 and 3'- UTR of PTEN mRNA. This study aims to investigate whether miR-25 plays roles in regulating the expression of PTEN and affecting the proliferation and apoptosis of cell line SKOV3 of epithelial ovarian cancer.

SKOV3 cells were inoculated on RPMI 1640 medium containing 10% FBS and 1% mycillin, and maintained in a 5% CO2 incubator at 37°C, and the medium was replaced every 2~3 d. Cells at logarithmic phase with good state were selected for experiments.

DNA of HEK293 cells was used as the template to amplify the total length of 3'-UTR segment of PTEN gene. PCR products were recycled by gel extraction kit and then were connected to pGL-3M vector following the digestion. DH5α competent bacteria were transformed, and the positive clones were screened by PCR of bacterial colonies. Then, the plasmids with correct sequencing were used for subsequent experiments.

pIRES2 was used as the plasmid of eukaryotic expression, and Xho I and BamH I were selected as the restriction enzymes. cDNA was used as the template to amplify PTEN gene. Gel extraction kit was used to collect target fragments separated by gel electrophoresis, and then the fragments were connected to the vector and the products were transferred into the competent cell JM109. Ammonia benzyl resistant solid culture plate was used to screen the positive strains, then the positive strains were amplifying cultured, and the recombinant plasmids with target segments were extracted. Then, the correct insertion of target segments of PTEN gene was determined by sequencing. Plasmids of inhibitor NC and miR-25 inhibitor, pIRES2- Scramble control plasmid with disordered sequence or overexpression plasmid pIRES2-PTEN were transfected into SKOV3 cells by Lipofectamine 2000, and they were divided into five groups: Inhibitor NC group, miR-25 inhibitor group, pIRES2-Scramble group, pIRES2-PTEN group and miR-25 inhibitor+pIRES2-PTEN group. Cells were collected for detection after transfection for 72 h.

Detection of gene expression by qRT-PCR

In the reverse transcription reaction system with the total volume of 10 μL, including 1 μg total RNA, 2 μL RT Buffer (5X), 0.5 μL oligo dT+Random primer Mix, 0.5 μL RT Enzyme Mix and 0.5 μL RNase inhibitor. ddH2O was complemented to the volume of 10 μL, the reaction conditions was 37°C for 15 min, and then, 98°C for 5 min. The obtained cDNA was preserved in the refrigerator at -20°C. With cDNA as the template, PCR amplification reaction was carried out with the action of TaqDNA polymerase. The primer sequences used were as follows:

In the PCR reaction system with the total volume of 10 μL, 5.0 μL of 2X SYBR Green Mixture, 0.5 μL of 2.5 μm/L forward and reverse primers separately, 1.0 μL of cDNA and 3.0 μL of ddH2O were added. Conditions for PCR: 95°C for 5 min, 95°C for 15 s, 60°C for 60 s. Forty cycles were amplified by the Bio- Rad CFX96 fluorescence quantitative PCR instrument, and fluorescent data were collected and analysed.

NP40 filtered cells were used and the supernatant was collected to measure the concentration of proteins. 6 μg of supernatant was sampled and separated by 10% SDS-PAGE for 2.5 h; the product was transferred into the PVDF film for 1.5 h, and blocked by 5% skim milk powder for 60 min at room temperature. The primary antibodies were inoculated at 4°C overnight (The dilution ratio of PTEN, p-AKT, p-FoxO3a, p27Kip1 and β-actin was 1: 200, 1: 100, 1: 100, and 1: 200, 1: 1000, respectively), and then rinsed by PBST for three times. The HRP labeled secondary antibodies were incubated for 60 min at room temperature, and rinsed by PBST for three times, and then incubated at room temperature for 2 min after ECL chemiluminescence liquid was added. Subsequently, the above solution was exposed, developed and fixed in a dark room, and the data obtained were analysed following scanning.

Detection on cell apoptosis by the flow cytometer

Cells were centrifuged and collected, and then rinsed by PBS twice. Next, 100 μL of Binding Buffer was added, blown and mixed, and then 5 μL of Annexin V-FITC and 5 μL of PI were added and reacted for 10 min in dark. Subsequently, 400 μL of Binding Buffer was added and the cells were re-suspended. Beckman FC 500MCL flow cytometer was used for detection.

Detection of cell cycle by the flow cytometer

Statistical analysis of data was performed by SPSS 18.0. Measurement data were expressed by mean ± standard deviation. The student t test was used in the comparison of inter-group measurement data, and P<0.05 indicated that the difference was statistically significant.

Disordered expression of miR-25 and PTEN in EOC tissues 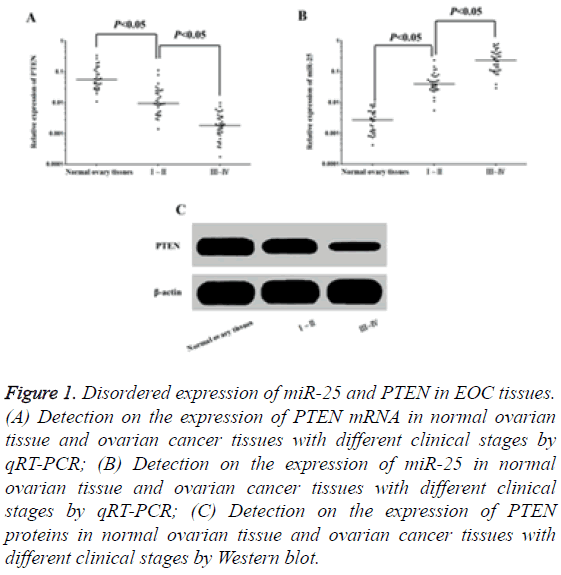 Targeted inhibition on the expression of PTEN by miR-25

The target gene prediction results from microRNA, org online showed that there were targeted complementary pairing binding sites between miR-25 and 3'-UTR of PTEN mRNA (Figure 2A). The results of dual-luciferase reporter gene experiments indicated that the transfection of miR-25mimic significantly decreased the relative activity of the luciferase in HEK293 cells (Figure 2B) and the expression of PTEN in SKOV3 cells (Figures 2C and 2D). However, the transfection of mimic NC had no significant inhibition on the relative activity of luciferase in HEK293 cells and the expression of PTEN in SKOV3 cells, suggesting that miR-25 could targeting inhibit the expression of PTEN. 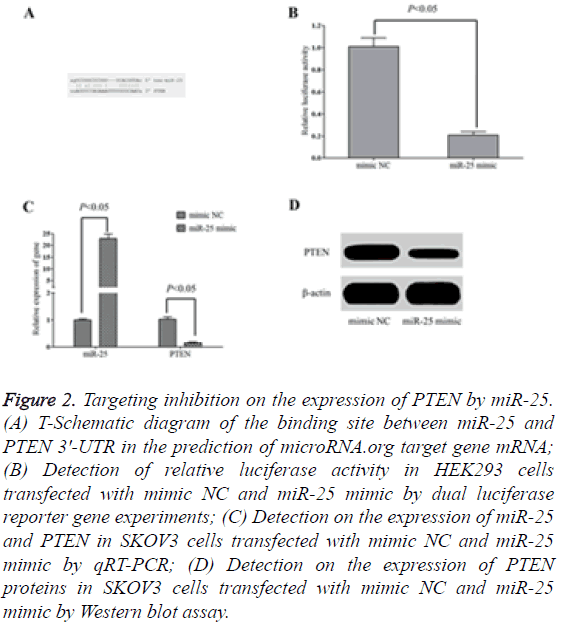 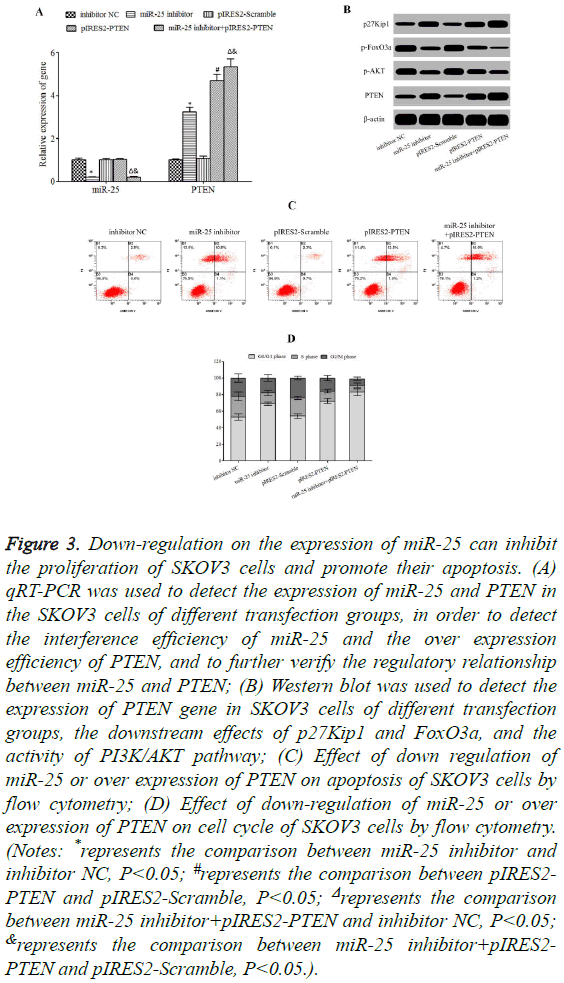 It is estimated that 225,000 patients are newly diagnosed with ovarian cancer every year throughout the world [15], and patients who die of ovarian cancer reach up to 145,000 every year [16]. There are significant differences in the regional distribution for ovarian cancer. The incidence rate in western developed countries is higher (approximately 10~12/100,000) than that in China (about 2~3/100,000). However, the incidence rate of ovarian cancer in China has been increasing year by year recently [15,17]. According to statistics [18], the mortality rate of ovarian rate reaches up to 5~7/100,000 throughout the world and ranks the first among malignant tumours of female reproductive system, which seriously endangers the life and health of females. The development of ovarian cancer is relatively hidden, and no significantly clinical symptoms were found at the early stage. However, this disease is progressed quickly, and approximately 60%~70% of patients have been in the middle and advanced stage when they feel discomfort and seek for medical treatment [19]. To date, no satisfactory clinical effects are obtained in the dominated surgical excision treatment, supplemented by chemotherapy and radiotherapy measures, and the qualities of lives of patients are not significantly improved. The 5 y survival rate is still lower being about 20~30% [20]. In general, the recurrence rate of ovarian cancer is higher for its characteristics of easy to metastasis and acquiring drug resistance, and approximately 50%~70% of patients will suffer from re-occurrence within 18 months after the first-line treatment [21].

Nearly all the development processes of tumours involve the changes of multiple factors and pathways of overexpression of proto oncogenes, viability and function defects of cancer suppressor genes, and PI3K/AKT signal transduction pathway extensively participates in the regulation of cell proliferation, cycle, apoptosis, differentiation and other biological effects, and is closely correlated with the occurrence, progression, treatment and outcome of malignant tumours [22]. PI3K, an important member in phospholipids kinase family, is formed by the third inositol phosphorylation of the phosphoinositide ring on the cell membrane and consists of catalytic subunit P110 and regulatory subunit P85. Under the stimulation of extracellular signals, PI3K is recruited into the site adjacent to the plasma membrane to catalyse the phosphorylation of its substrate phosphatidylinositol 4, 5-trisphosphate (PIP2) to generate phosphatidylinositol 3, 4, 5-trisphosphate (PIP3) [23]. AKT, also named protein kinase B (PKB), is a specific protein kinase to serine/threonine, and is one of downstream target molecules of PI3K. AKT under the rest state is usually distributed in the cytoplasm, however, under the action of the second messenger PIP3, the lipid binding site of AKT (i.e., PH binding site) can specifically combine with PIP3, which induces the conformational changes in the tertiary structure of AKT, as a result, it transfers from the cytoplasm to the cell membrane, and the two main phosphorylated residues of AKT are exposed. Under the catalytic action of PI3K-dependent kinase 1 (PDK1) and PI3K-dependent kinase 1 (PDK2), Thr308 and Ser473 sites of AKT are phosphorylated, and the phosphorylated and activated AKT can continuously deliver the information of promoting the cell growth and proliferation and inhibiting the cell apoptosis to downstream [24]. FoxO3a, an important member in Fork Head Transcription Factor (FKHR) family, can up regulate the expression of proapoptosis genes, for example, specific Cyclin-dependent Kinase Inhibitor (CKI) p27Kip1 [25], Bim [26], PUMA [27], or down-regulate the expression of antiapoptotic gene FLIP [28], and play roles on promoting cell apoptosis. Cell cycle regulatory protein p27Kip1 can closely combine with CDK2 and CDK4, inhibit their activities and block cells from entering into DNA synthetic stage S, thus blocking cell cycles at the stage G0/G1 and negatively regulating the proliferation of cells [29]. Phosphorylated and activated AKT in PI3K/AKT signal pathway can further phosphorylate FoxO3a to transfer FoxO3a from the nucleus to cytoplasm and reduce its transcriptional regulation on the nuclear genes [30], while the dephosphorylated FoxO3a immediately enters into the nucleus from the cytoplasm to trigger the transcription and translation of target genes and accelerate the cell apoptosis [31]. As a cancer suppressor gene, PTEN can inhibit the activity of phosphatase through dephosphorylation of PIP3 [32], or directly removing the phosphate group on serine/threonine residues of AKT, so as to antagonize the regulation of PI3K/AKT signal pathway on cell proliferation, cycle and apoptosis [33]. Studies indicated [9] that the expression of PTEN in tumour tissues was significantly decreased for patients with the ovarian cancer, suggesting that PTEN can act as a cancer suppressor gene in the onset of ovarian cancer. A number of studies reported that [11-13] the expression of miR-25 in tumour tissues or ovarian carcinoma cells were significantly increased in patients with the ovarian cancer, indicating that the increased expression of miR-25 may act as the carcinogenic gene in the onset of the ovarian cancer. Bioinformatics analysis shows that there are complementary pairing binding sites between miR-26a and 3'-UTR of PTEN mRNA. This study aims to investigate whether miR-25 plays roles on regulating the expression of PTEN and affecting the proliferation and apoptosis of cell lines SKOV3 of the epithelial ovarian cancer.