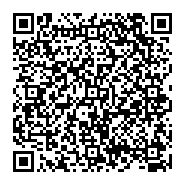 Evaluation of the anti-ulcer activities of Morus alba extracts in experimen-tally-induced gastric ulcer in rats.

Morus alba L. (mulberry) as a non-toxic natural therapeu-tic agent, belongs to the family of Moraaceae. The whole plant of M. alba L. possesses multiple medicinal values [1]. The root bark, leaves and fruits of Morus alba have been traditionally used in Asian countries for medicinal purposes due to its anti-inflammatory [2,3], hypoglycemic [4], hypolipidemic and antioxidant roles [5,6]. Several studies have shown that Morus alba has neuroprotective, antiphlogistic, liver and kidney protective, hypotensive, diuretic, anticough, and analgesic effect [7-9]. Further-more, it shows antiviral [10] and antimicrobial effects [11].

Pharmacological studies reveal that flavonoids, phenols, cumarins and terperols are the main bioactive constituents in M.alba [1]. Recent studies have revealed that flavon-oids and phenolic acid show speeding cruor, antioxidant, radioprotective, anti-mutagenic and anticarcinogenic ef-fects and that cumarins possess antibacterial, hypotensive, calmative and spasmolytic functions [12,13]. To our knowledge, there were no reports regarding the anti-ulcerogenic effect of M. alba leaves. The present study aimed to elucidate the anti-ulcerogenic effect of M. alba leaves in experimental rats with macroscopical and histo-logical investigation.

Omeprazole, as a reference anti-ulcer drug, belongs to a class of drugs called proton pump inhibitor which block the production of acid by the stomach. The drug was sus-pended in 10% Tween 80 and administered orally to animals at a concentration of 20 mg/kg body weight (5 ml/kg body weight). The leaves of Morus alba were collected from the Animal Department of the Faculty of Agricul-ture, University Kebangsaan Malaysia and identified by comparison with specimens available at the Herbarium of Rimba Ilmu, Institute of Biological Sciences, University of Malaya. The leaves were washed with distilled water and dried in incubator at 50°C for 5-7 days. The dried leaves were ground to powder using a grinder.

The dried powdered leaves were extracted by maceration in ethanol (100g/1500 ml, w/v) in a conical flask for 5 days at room temperature. Afterwards, the solvent was filtered followed by distillation under reduced pressure in EYELA rotary evaporator until excess solvent was evapo-rated. The extract was suspended in 10% Tween 80 (w/v) and was administered to rats at doses of 250 mg/kg and 500 mg/kg body weight.

Animals weighing 200-250 g were deprived of food for 48 h, but they were allowed free access to tap water until 2 h before the experiment. During the fasting period, the animals were placed individually in cages with wide-mesh wire bottoms to prevent coprophagy. On the day of experiment, the rats were randomly divided into 4 groups with 6 animals each.

The acute toxic class method of the Organization for Eco-nomic Cooperation and Development (OECD) was used to determine a safe dose for the extracts [14]. Thirty six animals (18 males and 18 females) were assigned equally into 3 groups labeled as vehicle (distilled water); low (2 g/kg body weight) and high (5 g/kg body weight) doses of leaf extract preparations. The animals were fasted over-night (food but not water) prior dosing. Food was with-held for a further 3 to 4 hours after dosing. Observations were done on mortality and behavioral changes of the rats following treatment for 24 hours. The acute toxicity LD50 was calculated at the geometric mean of the dose that re-sulted in 100% lethality and that which cause no lethality at all.

After 60 minutes, all animals were administered orally with 5 ml/kg absolute alcohol to induce gastric ulcer in all rats groups. One hour after their administration, all ani-mals were sacrificed by over-dose of diethyl ether and their stomach were rapidly removed and immersed in 10% buffered formalin solution.

Each stomach was opened along the greater curvature, rinsed with tap water to remove gastric contents and the mucosa was examined under dissecting microscope grossly (1.8x) with a square-grid eyepiece (big square: length X width = 10 X 10 mm2 = ulcer area) to assess the formation of ulcers area (hemorrhagic lesions). The length and width of each lesion was determined and the sum of the area of all lesions for each stomach was expressed as the ulcer area (mm2). The ulcer area (UA) was calculated as described by [15] with few modifications. The inhibi-tion percentage was calculated by the following formula of Njar et al. [16]:

The gastric wall specimen were fixed in 10% buffered formalin and processed by paraffin tissue processing ma-chine. The stomach was assessed for damage by taking a 5 μm section, stained with hematoxylin and eosin.

The experimental protocol for animal work was approved by the local ethics committee for animal experimentation in the Faculty of Medicine, University of Malaya, Ethic No. PM 28/-9/2007 MAA (R).

All values are reported as mean + S.E.M. and the statisti-cal significance of differences among groups were as-sessed using one-way analysis of variance (ANOVA). A value of P<0.05 was considered significant. Statistical computations were calculated using SPSS 11.5 for Win-dows software (SPSS Inc, Chicago, IL, USA).

Animals treated with M. alba extract (low and high dose) did not produce any major clinical signs of toxicity (respi-ratory distress, haematuria, uncoordinated muscle move-ment) during 24 hours observation period. No lethality was observed upon oral administration at the end of 24 hours of observation. It is indicated that the extract is safe and the oral lethal dose (LD50) for male and female rats is above 5 g/kg body weight of rats.

Animals pre-treated with 10% Tween 80 followed by ab-solute ethanol showed extensive macroscopic lesions (Table.1 and Fig.1). Severe hemorrhagic lineage was ob-served in variable sizes with the hemorrhagic lesions dis-tributed all over the glandular part of the stomachs indi-cating that gastric ulcer was completely formed. Pre-treatment with ethanolic extracts of M. alba or Omepra-zole significantly reduced (P<0.05) the formation of ethanol-induced gastric lesions compared to Group 2 animals (Table.1 and Fig.2). 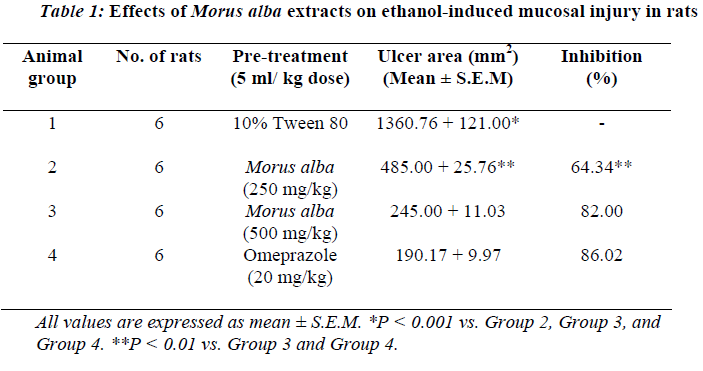 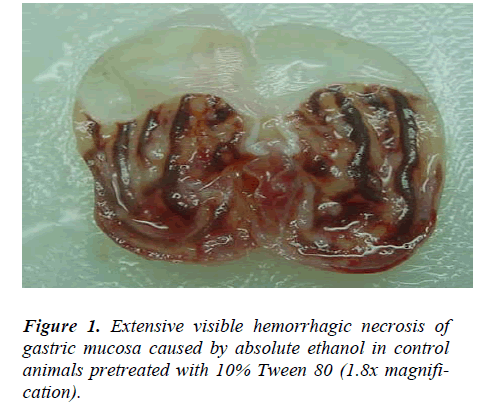 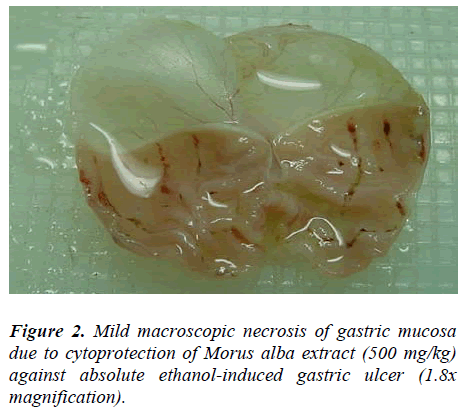 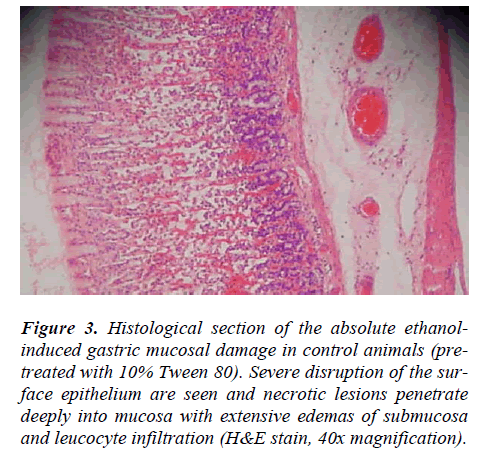 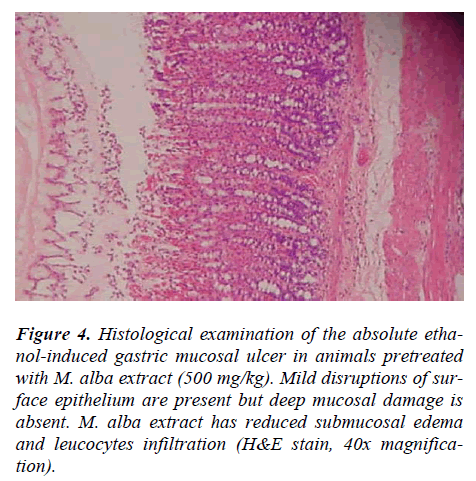 The results of the present study showed that rats pre-treated with M. alba extract significantly reduced the gas-tric mucosal injury with marked reduction in the leuco-cytes infiltration of submucosal layer. Cytoprotection was assessed by reduction in the macroscopically and micro-scopically visible lesions. Similarly, Cheng and Koo [17] have showed that oral administration of plant extract be-fore ethanol administration significantly decreases neu-trophil infiltratinn of gastric mucosa. Absolute alcohol extensively damaged the gastric mucosa leading to in-creased neutrophil infiltration into the gastric mucosa. Neutrophils are a major source of inflammatory mediators and can release potent reactive oxygen species such as superoxide, hydrogen peroxide and myeloperoxidase de-rived oxidants. These reactive oxygen species are highly cytotoxic and can induce tissue damage [17]. Further-more, neutrophil accumulation in gastric mucosa has been shown to induce microcirculatory abnormalities [18]. Suppression of neutrophil infiltration during inflammation was found to enhance gastric ulcer healing [19]. The dis-turbances in gastric secretion, damage to gastric mucosa, alterations in permeability, gastric mucus depletion and free-radical production have been reported as the patho-genic mechanism of ethanol [20].

The anti-ulcer mechanisms of gastric mucosa may be due to strengthening action on gastric mucosal lining and the suppression of damaging effects of free radicals [17]. Other studies have shown the potent inhibitory effect other types of plants on inflammation and the anti-inflammatory property of these plants may be attributed to inhibition of nitric oxide synthesis leading to enhance-ment of ulcer healing [21,22]. In addition, M. alba ex-tract possesses a potential anti-inflammatory activity and may prevent organ or tissue injury during acute en-dotoxemia or sepsis by suppressing inflammatory media-tors and thus facilitates ulcer healing [2,3]. M. alba leaves contain anti-inflammatory and antioxidant properties [23]. The anti-inflammatory and antioxidant properties of tur-meric may exert antiulcer activity through scavenging reactive oxygen species [24]. The acute toxicity profile of M. alba leaf extract could be considered favorable judg-ing from the high oral LD50 value obtained and the ab-sence of adverse clinical manifestations in experimental animals after 24 hours of observation. In conclusion, the results of the present study suggest a direct protective effect of Morus alba extracts on gastric mucosal damage and that the gastroprotective action of this plant may be due to its anti-inflammateroy and antioxidant properties. However, further studies are required to explore the mechanism of action in the gastric mucosa and submu-cosa.