The temperature of human body is indicative of critical medical information concerning the whole body. Abnormal rise in total and regional body temperature is a natural symptom in diagnosing many types of diseases. Thermal imaging (Thermography) utilizes infrared beams, which are fast, non-invasive, and non-contact. Generally, the output images by this technique are flexible and useful to monitor the temperature of the human body. The purpose of this study is to determine the diagnostic value of the breast tissue diseases by the help of thermography. In this paper, we used the non-contact infrared camera INFREC R500 for evaluating the capabilities of thermography. This study was conducted on 60 patients suspected of breast tissue disease, which were referred to Imam Khomeini Imaging Center. The overall information was obtained from multiple sources including a predefined medical questionnaire, the performed clinical examinations, diagnostic results obtained from ultrasound images, clinical biopsies and thermography. All of these inputs were analyzed by the respective experts of breast cancer. Medical analysis indicated that the use of Thermography as well as the asymmetry technique is useful in identifying hypo echoic and cystic masses. It should be noted that the patient should not suffer from breast discharge. The Accuracy of the asymmetry identification technique for identifying hypo echoic and cystic masses is 91/89% and 92/30%.In the same manner, the accuracy of identifying the exact location is 61/53% and 75%. This method is also effective in identifying heterogeneous, fibro-adenoma, and Intra-ductal masses. But it is unable to identify Iso-echo and calcified mass. According to the results of the investigation, Thermography is useful in the initial screening and supplementation of diagnostic procedures due to its safety (its non-ionizing radiation property which acts as everyday immersed heat), low cost and the exact recognition of diseases of the breast tissue.

In this study, after receiving and recording the patient's history, the results of the clinical examination along with the ultrasound and biopsy stereotypes and images of thermograph were examined separately by the respective specialists. After recording the results, by considering the clinical signs, the capabilities of thermography techniques were compared in identifying whether the case was healthy or not. In general, 60 patients were studied, the mean age of which was 44/9 years, the youngest one was 21 years old and the oldest was 73. According to the conducted calculations, the standard deviation is 11.56 and Lconf and uoconf are equal to -0.2011 and 0.2011 respectively. As shown in Figure 1, after thermal imaging, the breast areas are initially separated symmetrically from left and right. 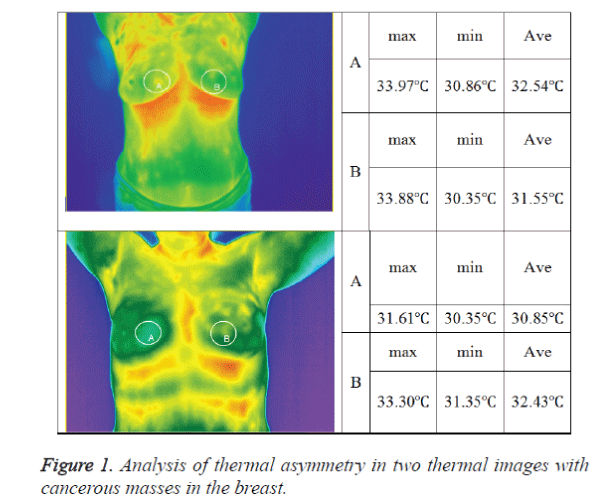 Figure 1. Analysis of thermal asymmetry in two thermal images with cancerous masses in the breast.

Then, the maximum and minimum and the average temperature are evaluated in these two areas. If the result doesn’t show significant difference, it is indicative of a non mass in the breast area (thermal symmetry). As shown in figure 1, the difference of one to two degrees Celsius is obvious between the left and right breast area. Moments can be used for further evaluation. Components of Intensity image are directly related to the distribution of thermal energy in the neighborhood. Image intensity histogram describes the image composition. Moment of histogram provides statistical information about the image texture. Four aspects: including average, variance, Skewness, and kurtosis are calculated. They are computed based on the following equation:

In which, pj is the probability density in iteration j in histogram. N is the total of beans. Two samples of the moment’s analysis in the thermographic images of the healthy person and the person with cancerous masse are indicated in the table 1 as it is clear from the table, the moment difference in the person suffering of cancer and the existence of asymmetry in the healthy person is clear.

Table 1. Statistical results portraying the mean and variance of Skewness and kurtosis on separated areas.

Table 2 shows the accuracy of the thermography results of the patients compared with pathology outputs for both Hypoechoic and Cystic masses (Figure 2). One of the factors discussed in this research is the subject of asymmetry in thermography. If this factor is detected correctly, it will help the screening and diagnosing of the exact location of the cancer or diseases related to breast tissue. The existence of these factors convinced us that there are complications in breast tissue that must be used in other methods for identifying the exact type of complication. One of the factors that have been addressed in this research is the asymmetry in thermography.

Table 2. The accuracy of the thermography results based on the type of the tumor. 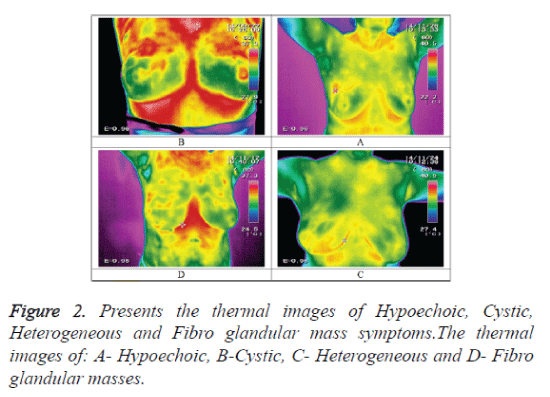 According to the magnitude of temperature changes all images were divided in 2 classes; normal (ΔT<1), abnormal (ΔT>1).Out of the 60 females screened, ΔT<1 was observed for 9 cases (3 cases had single breast). Out of these 51 subjects had (ΔT>1). The sensitivity of IR imaging by tumor, age, and size is shown in table 3. Due to results, it is clear that with increasing age, cancer detection will be difficult.

The analyzed images can be classified based on their Thermo biological scores into five main groups: TH1-Normal image without vascularity (blood vessels), TH2-Normal image with vascularity, TH3-Equivocal (questionable, but not abnormal), TH4-Abnormal TH5-Very abnormal.

Table 4 presents the results of classifying thermal images on 60 patients based on their Thermo biological scores. It is observed that asymmetry and thermal class are directly related to each other.

Table 4. Classifying the subject samples based on symptom types and their standard Thermo biological scores.

The statistical analysis as well as the comparison of the stage regarding thermal asymmetry has been shown in table 5. The important point is that the selected cases chosen based on the global article, which is the separation of the core and unnatural edges in the breast tissue it should be among those that suffer cancer, consequently the analysis of specificity and NPV are meaningless in this article.

Table 5. The statistical result in analyzing thermal asymmetric on breast.

Thermography itself does not provide information about the morphological structures of the breast but it can indicate the functional temperature data and the overall condition of breast tissue vessels [26]. The risk of getting breast cancer has tripled over the bygone half century with respect to modify in way of life and other factors [27]. Therefore it is essential to detect breast cancer primary for better administrator ship of this growing menace. For decades, Medical ultrasound (Sonography) and mammography have been used as the screening methods of select [28].

The risk of breast cancer during the past half century has tripled due to the changes in the people lifestyle and some other factor [25]. The significance of this study is due to the fact that there has been no comprehensive review and comparison done in diagnosing the diseases of breast tissue to relate thermography and ultrasound. Findings from the study indicate that thermography has either advantages or disadvantages in the detection of breast disease. With the advent of a new generation of infrared detectors, infrared thermal imaging has become a medical diagnostic tool for measuring the thermal pattern of abnormal areas. Furthermore, features of Thermal imaging include Sensitivity to the temperature, spatial resolution, and no contact, safe. Thermal images can be stored digitally and then processed by using various software packages and the researcher obtained a comprehensive understanding from the thermal model. The results of this study show that thermography can be used for the early detection and rapid screening. To complete this procedure, methods such as ultrasound can be employed. It can also be considered as a complementary method for ultrasound procedure.The next point is that asymmetry plays a key role in the early detection that we can recognize by means of the basic settings of the camera.Also, Thermography is suitable compared to the ultrasound diagnosis in detecting the breast tissue diseases such as cystic masses and hypo echo masses by adopting asymmetry technique. But this method has some weaknesses in detecting the exact location of the masse, such as cystic. However, thermography is weak in the asymmetry technique and detection of the exact location related to masses as micro calcification. And important point is that, people who once suffered from cancer and had the contents of their infected breast tissue evacuated, the use of asymmetry techniques would be inefficient in thermography. This study emphasizes that thermography should not be used for the first time diagnosis. Considering the progress of this technology and increasing the patient’s requests for a screening method with low price and no ionization, thermography as a breast imaging method can have many potential requests. This technology needs accurate clinical evaluation and it is likely that thermography can be a part of breast screening, detecting and etc. in near future.