Ethanol extract of dragon fruit and its effects on sperm quality and histology of the testes in mice.

The increasing prevalence of infertility cases is becoming a major public health problem in developing countries due to changes in diet and lifestyle. Dragon fruit (Hylocereus co-staricensis-[HC]) plays an important role as a fertility agent due to its antioxidant and anti-proliferative properties. The main aim of the present study was to identify the effects of ethanol extract of HC on sperm quality and histology of the testes. A total of twenty 10-week-old male ICR mice were divided equally into four different groups. Ethanol extract of HC (diluted to 0.2 mL with distilled water) was gavaged for 25 days at a dose of 250 mg/kg , 500 mg/kg and 1000 mg/kg body weight to the animals of group II (n=5), III (n=5) and IV (n=5), respectively. The animals of group I (control, n=5) had distilled water (0.2 ml). Re-sults were analyzed using one way ANOVA test and the data were significant at p<0.05. Oral administration of HC extract showed an increased sperm count, sperm viability, and its production rate. The HC extract at a dose of 500 mg/kg was found to be most effective to increase sperm count whereas HC of 1000 mg/kg effectively increased sperm viability and its production rate. Histological examination of the testis showed high density of sperm in seminiferous tubules. From our present experimental findings we are tempted to suggest that the ethanol extract of HC could be a potential male fertility agent.

The fruits of Hylocereus cacti, known as red pitaya have recently drawn much attention of growers worldwide, not only because of their red-purple colour and economic value as food products, but also for the antioxidant property of their betacyanin contents [1]. The Hylocereus genus, the climbing or epiphytic tropical American cacti with angular stems and mostly with white, fragrant, night blooming flowers. Pitaya, the fruit of some strains of this cactus family, native to the tropical forest regions of Mexico and South America is currently being grown commercially in Taiwan, Nicaragua, Colombia, Vietnam, Israel, Australia and USA [2].

Studies have shown that both the flesh and peel of the fruit are rich in polyphenols and also good sources of antioxidants [3]. Many investigators have moreover, reported that dragon fruits have a potent antioxidant activity. In fact, the red pitaya peel fulfills its promise to inhibit the growth of melanoma cells which suggests that it has antiproliferative effect and acts as an anti-cancer agent [4]. More than 90% of male infertility cases are known to be due to low sperm quality [5]. In 30 – 40% cases of sperm abnormality, the main cause remains unknown (unexplained infertility) but the rest could be due to health problems such as chronic disease, lack of nutrition, ge-netic abnormality and environmental factors.

Reactive oxygen species (ROS) are highly reactive oxi-dizing agents (free radicals). ROS is formed at various organs including the testes. However, its inappropriate synthesis results in cellular DNA disintegration [6]. Anti-oxidants, in general scavenge and suppress the adverse effects of ROS and lipid peroxidation, hence the applica-tion of ROS scavengers is likely to improve the sperm function [7]. Although the presence of natural antioxidant and other vitamins in dragon fruit is proven to be beneficial for hu-man health, yet no evidence has so far been documented about the effects of dragon fruit or its extracts on male fertility. Present study was therefore undertaken to iden-tify whether the extract of Hylocereus costaricensis shows any beneficial effects on sperm count, sperm vi-ability and the rate of spermatogenesis

The dragon fruit (HC) was purchased from the local store, washed and peeled off. The flesh was then dried in an oven for two days at 50°C. Once dried, it was grinded and refrigerated at (4°C). Extraction process was carried out by using 95% denatured ethanol in Soxhlet machine, and then transferred into Rotowap machine to separate it from the ethanol. Samples were then placed in vials and were dried by using nitrogen gas.

All animal experiments were conducted according to the research protocols approved by UKMAEC Guidelines 2003 – Universiti Kebangsaan Malaysia Animal Ethics Committee. Ten-week-old ICR mice (Mus musculus) were procured from animal house of the Universiti Kebangsaan Malaysia. Animals were maintained on bal-anced diet and water ad libitum. A total of 20 mice with body weight ranging from 28 to 30 g were selected and randomly divided into four different groups, five in each group. Animals of Group I (controls) were force fed with distilled water. Animals of Group II identically received HC (250 mg/kg) extract while Group III and Group IV animals had 500 mg/kg and 1000 mg/kg of extract, re-spectively. The volume of each gavage was 0.2 mL (200 μL) and the procedure was repeated daily between 8.00-9.00 am for 25 consecutive days.

Animals were sacrificed using chloroform 24 hrs following the treatment schedule; testes and the liver were dissected out, cleared of their adhering tissue and weighed. Testes and the liver tissues were fixed in Bouin’s solution for histological analysis.

Sperm concentration from the cauda epididymis was determined with a hemacytometer using the method described by WHO [8]. The cauda epididymis was finely minced by anatomical scissors in 5 ml of Bigger-Whitten - Whittingham (BWW) medium [9] in a petri dish prior to incubation with 5% CO2 for 30 min at 37°C to allow the migration of spermatozoa to the medium. For sperm mor-phology study, sperm suspension (10μL) was smeared on a glass slide and dried overnight at room temperature. The slide was fixed with 100% methanol and finally stained with Giemsa diluted in PBS at 1:3 ratios. For viability study, sperm suspension (10μL) was placed on a slide and added with 10μL of Eosin and examined under the microscope at 400 X magnification. Heads of the spermatozoa which showed red coloration were considered to be mortal and vice versa.

To determine the changes in the testes and the liver, both tissues were fixed in a Bouin’s solution for 24 hours, washed in running tap water, dehydrated through graded concentration of ethanol, embedded in paraffin wax, sectioned at 5 μm thicknesses and stained with Hematoxylin and Eosin (H&E). Testicular spermatogenesis ranging from germ cell production up to the stage of mature spermatozoa was evaluated. Histological status of the liver of the animals was also evaluated.

All data were subjected to a one-way analysis of variance (ANOVA) to determine the level of significance between control and the treated groups. A difference was considered significant at p<0.05. Data are reported here as mean ± standard deviation (±SD).

Administration of HC extract did not show any significant change in the weight of the testes and the liver (Table 1). 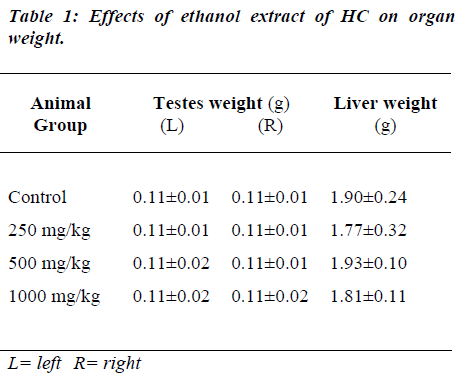 Table 1: Effects of ethanol extract of HC on organ weight.

The effects of different doses of HC extract on sperm count, sperm viability and sperm morphology are presented in Table 2. The HC extract at 500 mg/kg significantly increased the sperm count (p<0.05) while the dose of 1000 mg/kg significantly increased sperm viability (p<0.05) compared to the controls. However, sperm morphology remained normal in all the groups of animals. 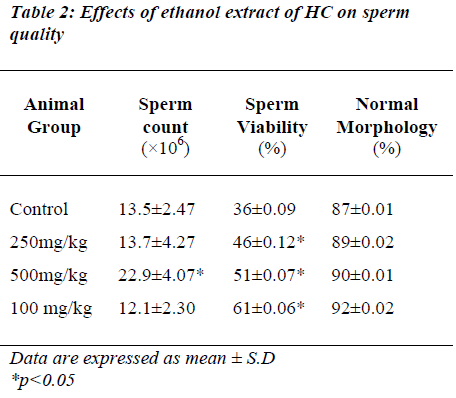 Table 2: Effects of ethanol extract of HC on sperm quality.

Effects of HC extract on spermatogenesis

Seminiferous tubular structure suggested an increased tendency of spermatogenic process following the use of HC extract at a dose of 500 mg/kg which had further showed to be reduced following 1000 mg/kg (Fig. 1a, b, c, d).

Figure 1: Section of seminiferous tubules of mice from (a) control group and treated groups with (b)250 mg/kg (c)500 mg/kg (d)1000 mg/kg of HC extract respectively, indicate the presence of spermatid in the lumen of tes-tis(arrows). H&E (x 400)

Effects of HC extract on the liver

Results of this study demonstrated that daily consumption of HC extract for 25 consecutive days increased the cauda epididymal sperm count and sperm viability.

Previous studies explained that testicular cells are well equipped with enzymatic and low molecular weight antioxidants to maintain redox homeostasis and prevent the formation of reactive oxygen species (ROS) [12]. On the other hand, excessive formation of ROS may override antioxidant defenses and results in oxidative stressinduced permanent damaged to testicular cells. The high content of polyunsaturated fatty acids in testicular cell membrane easily undergoes lipid peroxidation and leads to oxidative stress [13, 14]. Oxidative stress consequently results in abnormal sperm production and function [15]. Therefore, ascorbic acid as a natural antioxidant could possibly be able to minimize generation of an excess ROS and subsequently protect the testicular damage [16].

The significant increased in the sperm count and viability at different dose levels of HC extract indicate that the levels of antioxidant may possibly increase with an increase in the dosage of HC extract and thus help to protect testicular germ cell and other spermatogenic cell death from oxidative stress[17]. However, further investigation is very much required to claim that the ascorbic acid content of HC extract is primarily responsible for increasing male fertility.

In conclusion, the resulting beneficial effects of the HC extract on different sperm parameters in mice may possibly be mediated by preventing the formation of ROS in the testes.

The authors thank Prof. Dr. Amar Chatterjee from UiTM, Dr. Srijitt Das and Prof. Dr. Othman Omar from UKM for revising the paper.This work was supported by a grant from the School of Biosciences & Biotechnology, Faculty of Science & Technology, Universiti Kebangsaan Malay-sia.