#Contribute equally to this work

Aim: The study is to understand histopathological abnormalities in neonatal Sprague-Dawley (SD) rats with acute lung injury (ALI) induced by different doses of lipopolysaccharide (LPS) and to explore suitable doses of LPS to develop ALI model of neonatal SD rats in 12-48 hours (h).

Acute lung injury and acute respiratory distress syndrome (ALI/ARDS) are serious clinical disorders characterized by the disruption of the capillary-alveolar barrier, leading to the development of pulmonary edema and acute respiratory failure [1]. It often occurs in sepsis and in hemorrhagic shock [2]. It is one of the most common and fatal complication in neonates. ALI/ARDS is a severe inflammatory process of the lung. However, the molecular mechanisms responsible for the development of these conditions are poorly understood. Consensus criteria have been reached so that this clinical condition is now referred to as ARDS [1].

Despite multiple new treatment strategies have been introduced, the incidence and mortality of this disease remain unacceptably high [3]. The frequency of ALI in the United States alone is ~190,000 cases/year with a result of 74,500 deaths. ARDS mortality remains high at 36% to 44% [4,5].

It has been reported that sepsis, especially gram negative bacterial infection, is the most common cause of ALI/ARDS in neonates [6]. LPS, a major component of gram negative bacteria cell walls, was usually used to develop ALI in animals [7]. Hence, systemic administration of LPS has been widely used as a relevant model of ALI. Animal models have the potential to elucidate the mechanisms of disease and identify prognostic markers and therapeutic targets.

Recent studies found that the doses of 10 mg/kg and 5 mg/kg LPS administered respectively by intratracheal instillation could induce adult lung injury model. This results indicate that model of LPS-induced ALI is well established [8,9]. However, there hasn’t a complete and systematic report about developing ALI model of neonatal SD rats. Therefore, it will be meaningful for related research to establish the model of ALI with neonatal Sprague-Dawley (SD) rats.

The aim of this study was to understand histopathological abnormalities in neonatal SD with ALI induced by different doses of LPS and to explore suitable doses of LPS to develop ALI model of neonatal SD rats in 12-48 h.

(2) 72 newly-born SD rats were randomly divided into LPS and control groups according to the above method (n=12 for each group). The LPS groups of animals were killed at 24, 36, and 48 h. Lungs were collected and used for histological analysis, histological score, determination of wet-dry ratio and radial alveolar cunt (RAC). Control group of animals were treated according to exactly the same protocol except that they received an intraperitoneal injection of NS instead of LPS.

The animals were fed milk and water. We monitored and recorded survival rate of each group in 48 h. At the same time, we also observed changes of respiratory ability and activity in new-born rats.

The left lung tissues from twelve animals in each group were taken for histopathology. To harvest the lungs, we fixed the lungs with 4% paraformaldehyde. After overnight fixation, tissue was embedded in paraffin, sectioned, and stained with haematoxylin and eosin (HE). HE stains were made to determine morphology and inflammatory infiltrate. Paraffinembedded lungs were cut into 4 μm thick sections were visualized by light microscopy (400×) (Olympus, DP73) for histological analysis. In brief, ALI was classified into 4 categories based on the severity of alveolar congestion and hemorrhage, infiltration of neutrophils in the air spaces or vessel walls, and the thickness of alveolar wall/hyaline membrane formation. The severity of each category was graded from 0 (minimal) to 4 (maximal) and the total score was calculated by adding the scores in each of these categories. In each animal, 4 separate lung sections were graded to generate the mean score [10].

Wet-dry ratio (W/D) was measured as described previously [11]. The right upper lobes of lungs were removed immediately from newborn rats to prevent evaporative fluid loss from the tissues, then placed in a tarred microcentrifuge tube, and weighed. Lungs were then desiccated under a vacuum at 60°C for 72 h and weighed again. The wet lung mass was divided by the dry lung mass to give the wet-dry ratio.

Alveolar development was evaluated by the RAC method as described previously with human lungs [12]. No counts were made if the respiratory bronchiole was nearer to the edge of the slide than to the nearest connective tissue septum. At least four different sections from each lung were used for this measurement. Photographs from six random 100× lung fields were taken from each section.

In the survival study, Survivals were compared by the Pearson Chi-square test. Continuous data were summarized as mean ± standard deviation (SD). Differences among all groups at each time point were analyzed by one-way analysis of variance (ANOVA) or Student’s t test. For comparisons between groups, LSD or Tamhane’s T2 with or without homegeneity of variances were used. P value less than 0.05 was considered statistically significant. Data were analysed using SPSS17.0 software (SPSS Inc, Chicago, IL, USA).

Table 1. The number of survivals in each group with neonatal SD rats in specific time (n=30).

As shown in Figures 1-3 in the control group, observing the lung tissue slice of HE staining, secretion and inflammatory cell infiltration were not observed in the pulmonary alveolus cavity, and the structure of pulmonary alveolus wall is normal. In the LPS groups, acute lung damage with interstitial edema, hemorrhage, thickening of the alveolar wall, and infiltration of inflammatory cells into the interstitium and alveolar spaces were observed under the light microscope. In the LPS groups, the inflammatory cell infiltration and the degree of hemorrhage were increased and the alveolar septum edema was gradually thickened along with increased dose of LPS and prolonged time. The lung histological scores in all LPS groups were higher than in the control group at 24 h and 36 h (all p<0.05). The total histological scores in the LPS 1 mg group at each time point were higher than in the control group (all P<0.05) (Table 2). 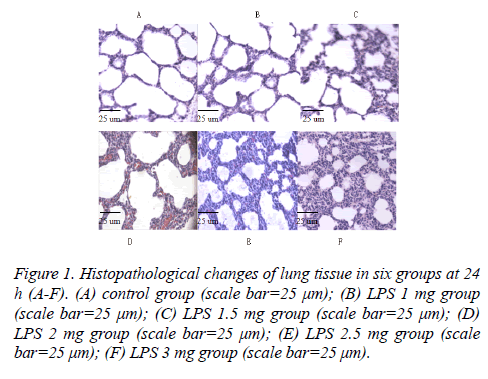 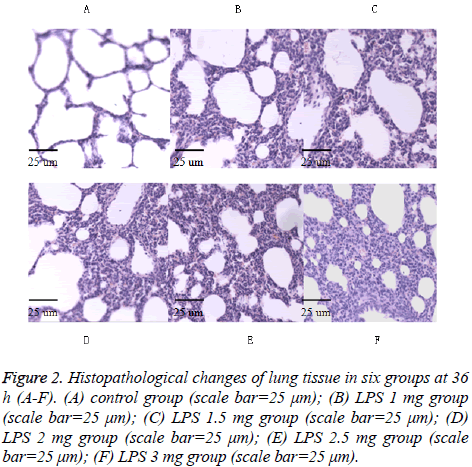 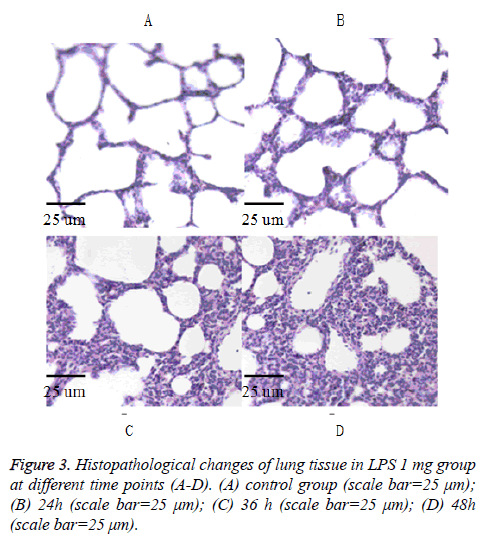 Table 2. The changes of lung histological score in each group with neonatal SD rats at different time points (

Table 4. The dynamic changes of RAC in each group with neonatal SD rats at different time points (

The choice of ALI animal model for evaluation of innovative therapeutic interventions and mechanism research is critical due to the complexity of ALI, and the apparent disconnect between animal and clinical studies [13]. Currently, the animal models of ALI can be induced by hydrochloric acid, repeated saline lavage, oleic acid and LPS, etc. They have strengths and weaknesses of different types of animal models that have been used to study the mechanisms and treatment of ALI [14]. Owning to gram-negative sepsis is one of the most common causes of ALI/ARDS in humans; the model of LPS-induced ALI has clinical relevance [7]. The pathophysiology in the LPS animal model is consistent with an elevated inflammatory response. It is also very reproducible and provides important information about host inflammatory responses [15] and it is not only appropriate for studying the pathogenesis of ALI/ ARDS but also for studying ALI/ARDS complicated with heart failure or pulmonary hypertension [14].

The pathophysiology of ALI/ARDS progresses through three overlapping stages consisting of an early exudative stage, amid proliferative stage, and a late fibrotic stage [16]. The exudative stage begins at 12 to 24 hours after the initiating insult and may continue through 7 days; The next pathophysiologic stage is the proliferative, which may begin 3 days after the original insult and can last as long as 2 week; The last stage of ALI/ ARDS injury is the fibrotic, which lasts 5 to 28 days after injury. It is reported that the clinical manifestations of ALI develop acutely, usually within 24 to 48 h after the initiating insult [17-19]. Therefore, survival rate combined with lung injury’s degree are essential for the study of ALI model within 48 h underlying the development of this severe disease.

Our results showed the pathology of the lung is consistent with an elevated inflammatory response of patients with ALI. In the LPS groups, interstitial edema, haemorrhage, thickening of the alveolar wall, and infiltration of inflammatory cells into the interstitium and alveolar spaces were observed under the light microscope. These results demonstrate that LPS could induce injury and inflammatory response in the lung, suggesting that LPS-induced ALI was successfully established in neonatal rats; it is consistent with findings of An JF et al. [20].

This research was funded by grants of Key Child Health Personnel in Jiangsu Province (Project no: FRC201211).