Monoamine Oxidase (MAO; EC 1.4.3.4.) is a widely distributed mitochondrial enzyme with two isoforms: MAO-A and MAO-B. It has high expression levels in gastro-intestinal and hepatic as well as neuronal tissues. The enzyme catalyzes the oxidative deamination of a variety of monoamines, both endogenous and exogenous, and has major roles in metabolizing released neurotransmitters, and in detoxification of a large variety of endogenous and exogenous amines. Drugs which inhibit MAO are currently in clinical use for treatment of affective disorders. Major Depressive Disorder (MDD), the most prevalent mood disorder is the leading cause of worldwide disability. Core symptoms of MDD include depressed mood, irritability, anhedonia (defined as the reduced ability to experience pleasure from previously rewarding activities), difficulty concentrating, and disrupted appetite and sleep habits. Several clinical studies report a high prevalence of MDD comorbidity with inflammatory diseases including cardiovascular diseases, diabetes, metabolic disorders, asthma, and rheumatoid arthritis. Medicinal plant play a significant role in providing primary health care services to rural people serving as therapeutic agents as well as important raw materials for the manufacture of traditional and modern medicine. A large number of medicinal plants are claimed to possess the antidepressant properties in the traditional system and are also used extensively by people worldwide R. Vomitoria, a shrub of the family Apocynaceae is commonly called serpent wood or swizzler stick and is used locally in the treatment of mental disorders, nervous disorders and insomnia.The aim of this article is to review the findings of the studies on antidepressant effects, mechanism of action of medicinal plants with emphasis on monoamine oxidase enzyme. Ninety male Wistar rats were orally administered 125, 250 and 500 mg/kg body weight of aqueous and ethanol root extract of Rauwolfia vomitoria for 14 and 28 days. Animals were sacrificed by cervical dislocation and monoamine oxidase activity was determined spectrophotometrically. Rauwolfia vomitoria root decreased MAO significantly compared to standard imipramine, citalopram and control.

Monoamine Oxidase (MAO, E.C. 1.4.3.4) is a flavin- adenine type of enzyme with two isoforms referred to MAO-A and MAO-B that, catalyses the oxidative deamination of monoamine neurotransmitters (dopamine, norepinephrine, and 5-hydroxytryptamine) from the brain as well as tyranine, xenobiotic and endogenous amines [1- 3]. MAO-A and MAO-B, which play an important role in the Central Nervous System (CNS) and peripheral organs. MAO-B is involved in neurodegenerative diseases and MAO-A preferentially metabolizes 5-HT, NE, Dopamine (DA) -the monoamines closely linked to psychiatric conditions and depression [4].

The A form of MAO, inhibitors of MAO-B are useful as neuroprotectants, whereas inhibitors of MAO-A are effective antidepressants although their use may trigger adverse reactions (e.g., hypertensive crisis with foods containing tyramine) [5].

Monoamine oxidase inhibitors are responsible for blocking the monoamine oxidase enzyme. MAO is inhibit the breakdown of these neurotransmitters thus, increasing their levels and allowing them to continue to influence the cells that have been affected by depression [3]. MAO-A is involved in psychiatric conditions and depression while MAO-B is involved in neurodegenerative diseases. Inhibitors of MAO-A are effective antidepressants although their use may trigger adverse reactions (e.g., hypertensive crisis with foods containing tyramine) whereas, inhibitors of MAO-B are useful as neuroprotectants [1].

Depression is a multifactorial, chronic, and life threatening highly prevalent psychiatric disorder with a lifetime risk close to 20% and is associated with high levels of morbidity and mortality [6].

The World Health Organization global burden of disease study places unipolar affective disorder amongst the 10 leading medical causes of disability in the world and second only to ischaemic heart disease [7]. Twenty nine percent of the world population suffers from depression, considered to be one of the ten leading causes of death [8- 10]. It has been predicted to be the leading cause of disease burden in 2030 by the World Health Organization (WHO, 2008) and is different from usual mood fluctuations and short-lived emotional responses to challenges in everyday life. Depression affects not only the patients but also their friends and families. The main symptoms of depression are social withdrawal, lack of motivation, sexual dysfunction, sleep disorders (in 75% of the patients), nightmares, depressed mood, and anhedonia [11]. Fifteen percent 15% to 25% of patients with depression have suicidal thoughts and sadism [12]. Different factors including biological, inherited, and psychosocial contribute to the development of depression. Recently, internal stressors such as variations in serum levels of cholesterol, triglyceride, sugar, and coagulation factors have been reported to be involved in the development of depression [13]. Depressed patients are at higher risk of serious physical health problems such as coronary artery disease and diabetes and worsening of the prognosis of other medical conditions [7]. Follow-up studies show depression to be a long term, relapsing condition associated with significant morbidity and mortality and a tendency towards chronicity. Three quarters of the patients experience more than one episode of depression and the risk of recurrence is higher if the first episode occurs at a younger age and if there is a family history of depression [14].

The risk of recurrence increases with each new episode and as the number of depressive episodes increases, the influence of life stress on recurrence wanes. Although several classes of antidepressants are currently being used in the treatment of this disorder, 30-40% of depressed patients have treatment resistant depression which does not respond to currently available antidepressant therapies [15]. Medications such as, lithium salts, stimulants, tricyclic antidepressants, serotonin inhibitors, and monoamine oxidase inhibitors in use cause a lot of adverse effect such as sleepiness, dry mouth, constipation, and impotence. Hence there is a hunt for antidepressants with better therapeutic actions, lesser side effects and lesser cost [16].

Medicinal plants have attracted the attention of the researchers working in this field because these plants have long been used to treat different diseases, including psychiatric disorders, and because fewer adverse effects than synthetic and chemical drugs [17].

Medicinal plants have been used over the years in complementary and alternative medicine for the management and treatment of variety of diseases and preservation of human health. One of the plants of medicinal value from the humid tropics is Rauwolfia, a tropical shrub with white or greenish flowers [18]. The plant Rauwolfia vomitoria belongs to the family Apocynaceae and it is called serpent wood, serpent snake root and swizzle stick, as well as, “asofeyeje” in Yoruba, “ira” in igbo, “wadda” in Hausa, “akata” in Bini and “Mmoneba” or “utoenyin” in Efik. It is mostly found in the forest of the southern part of Nigeria [19]. Research showed that herbal preparations of R. vomitoria have been used in traditional folk medicine in Africa as antioxidant, antipyretic, antiglycemic, anticonvulsant, analgesic, antipsychotic, anti-cancer, sedative properties and for mental disorder [20,21].

Plant collection and identification: The roots of R. vomitoria were collected from Lambo Lasunwom village, Ikorodu, Lagos State, South west, Nigeria. The plant was identified and authenticated by Department of Botany, University of Lagos. A Voucher Specimen was deposited in the University herbarium with reference number LUH 6213.

Preparation of root extracts of R. vomitoria: R.vomitoria roots were left to dry and then ground to a coarse powdery form with Christy-Norris Laboratory Hammer Mill and kept in an air tight container until needed for use. The root powder was extracted by soxhlet extraction [22]. Petroleum ether, hexane, ethyl acetate, ethanol and water (5L) were used for extraction of 600 g dried ground plant material for 6-8h. Upon complete extraction, the solvents were completely evaporated using a rotary evaporator and extracts were stored at 4ºC until needed.

Animal handling: Ninety male wistar rats (170.50 ± 6.50 g) obtained from the Laboratory Animal Centre of the College of Medicine, University of Lagos (CMUL) were acclimatized for 14 days in plastic cages with wire screen top at room temperature in accordance with ethical guidelines of animal experimentation in conformity to the Unites States and institutional regulations. They were fed commercial rat chow and water ad libitum [23], acclimatized for 14 days and maintained under standard condition (27 ± 2.0ºC) and 12 h dark and light cycle. The rats were randomly divided into 9 groups consisting of 10 rats each.

Administration of drugs and extracts were done between 9.00am and 10.00am daily. Treatments ended on the 14th and 28th day respectively.

Collection of organs and blood

Blood sample was collected by ocular puncture from the animals into lithium heparin bottles and stored in biofreezers at -80ºC until used for monoamine oxidase quantification.The animals were then sacrificed by cervical dislocation, the brain was excised, washed free of blood with normal saline (0.9% NaCl) and kept in 0.1 M phosphate buffer (pH7.2) and stored at -80ºC until needed for further analysis. The monoamine oxidase activity was determined spectrophotometrically by the method of Hubert [24]. 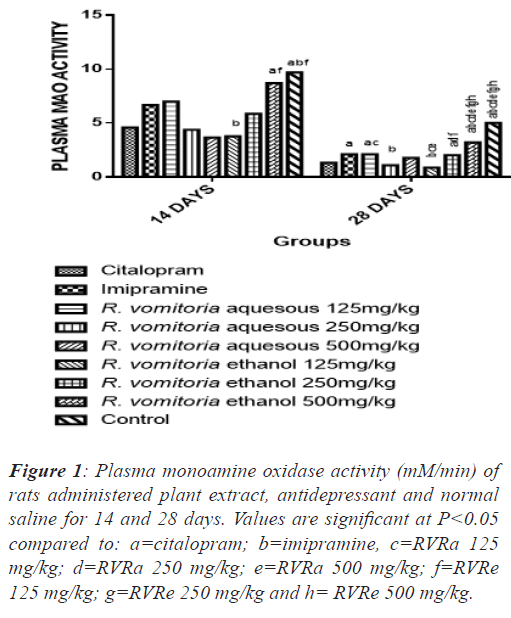 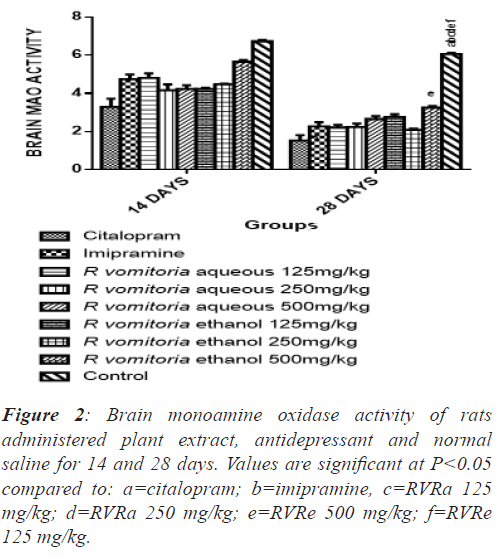 The enzyme Monoamine Oxidase (MAO) regulates the metabolic degradation of cathecolamines, serotonin and other endogenous amines in the central nervous system. Inhibition of this enzyme causes a reduction in metabolism and subsequent increase in the concentration of neurotransmitters (serotonin, dopamine, norepinephrine, tyramine, tryptamine). Inhibitors of MAO are effective antidepressants [5]. MAO plays an important role in psychiatric conditions and depression [25]. R.vomitoria extract in this study reduced the monoamine oxidase activity, hence exerted antidepressant-like action.