Monocular enucleation induced changes in the visual system in neonates have been reported by many workers but information regarding its effects in adults remains scanty. Present study is an attempt to find out the latter in rabbits. 25 adult rabbits of either sex were subjected to monocular enucleation under general anaesthesia. A similar number of nonenucleates served as controls. Animals were sacrificed after post lesion-survival periods ranging from 2 weeks to 4 months. Brains were fixed by trans-cardiac perfusion of 10% formalin. Superior colliculi were removed from midbrain and processed for paraffin embedding. 10 μ thick sections were stained with Hae-matoxylin and Eosin, Cresyl violet and Luxol fast blue and Thionin as well as Kluver Barrera and Glees and Marshland stains. To access the deafferentation-induced changes in the contralateral (with respect to enucleation), sections from superior colliculi were observed under light micro-scope. Morphological changes were in the form of vacuolation in the neuropil, fascicular disor-ganization and fragmentation of myelin, cytoplasmic and nuclear disintegration of neurons and glial cell aggregation. It was concluded that though the deafferentation-induced changes were not dramatic at any point of time during study, yet its extent could be correlated with duration of post-experimental survival period of the animal.

Monocular enucleation of rodents soon after birth is known to have profound morphological consequences on the visual centers contralateral to the side of enucleation. This is not surprising as in adult rats and mice about 90% and 97% of the ganglion cell axons cross over at the optic chiasma respectively [1,2]. Morphological studies of the superior colliculus in rodents enucleated soon after birth has been shown to result in deficits in the volume of the colliculus [3,4,5,6,7,8] wherein, the superficial layers being more affected than the deeper one [3,5,9,10]. Enu-cleation-induced morphological changes during adult-hood has also been reported by many workers [3,6,7,11,12,13,14,15,16] but literature regarding post-lesion time-dependent changes in adult superior colliculus remains scanty.

The present study was undertaken to examine the morphological consequences of deafferentation, induced by ocular enucleation in the adult superior colliculus at progressive postlesional intervals.

50 adult healthy rabbits were obtained from the Central Animal House, J. N. Medical College, Aligarh. 25 animals were enucleated for left eye under general anaesthesia by lateral canthotomy procedure and remaining 25 rabbits served as controls. During postoperative period experimental animals were regularly cleaned and dressed for their wounds, and received antibiotics and analgesics. Both experimental (operated) and controls (unoperated) were kept in cages with not more than 3 rabbits per cage. The animals were sacrificed at post-operative survival periods of 2 week, 1 month, 2 month and 4 month, and were fixed by intracardiac perfusion of physiological saline followed immediately by 10% formalin solution. Brains were dissected out and the superior colliculi of both sides were removed and were processed for paraffin embedding. 10 μ thick sections were stained with Haematoxylin and Eosin, Cresyl violet, and Luxol fast blue and Thionin as well as Kluver Barrera and Glees and Marshland techniques and observed under light microscope. Relevant findings were recorded in representative photo-micrographs.

Superior colliculi consist of a pair of prominent spheroidal mass of gray matter located on the dorsal aspect of midbrain (Fig.1A). In the experimental animals, up to 2 month of survival, it revealed no obvious size differences. However, at 4 months post-enucleation survival, right (contralateral) superior colliculus revealed mild shrinkage both in comparison to left side of the same animal as well as with that of control. 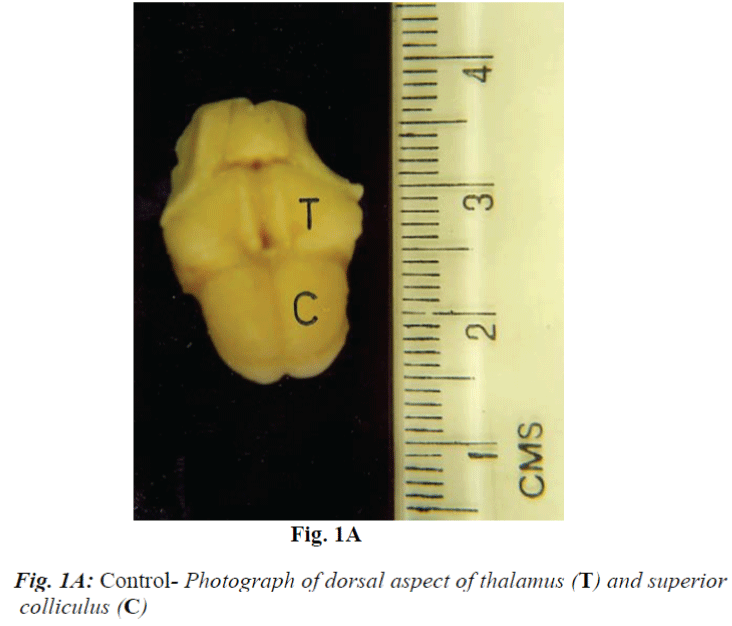 It consists of seven laminae (I to VII) from superficial to deep. Each lamina has distinct cytoarchitecture (Fig. 1B). Laminae I and II consist of small and medium sized neurons. Lamina III is composed of medium sized neurons and bundles of nerve fibres (Fig. 2A and 2B) which is said to be of retinocollicular and corticocollicular in origin. Lamina IV consists of medium size neurons with no definite pattern of nerve fascicles. Lamina V is characterized by medium size neurons and definite pattern of nerve fascicles. Only under high power of magnification laminae VI and VII revealed large size multipolar neurons and poorly defined nerve bundle. Glial cells in almost all fields were characterized by small, darkly stained condensed nuclei and absence of Nissl substance in their cytoplasm. They outnumbered neurons in all portions of superior colliculus similar to most regions of brain. 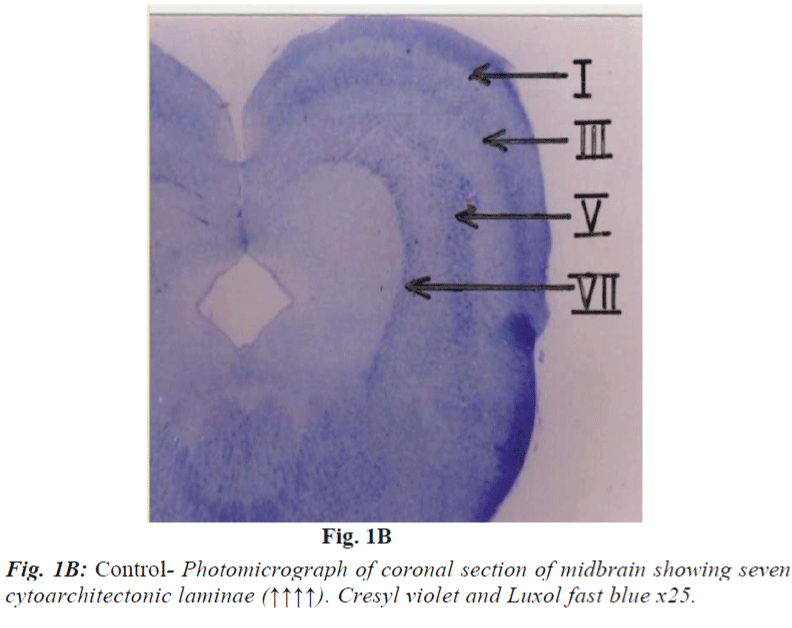 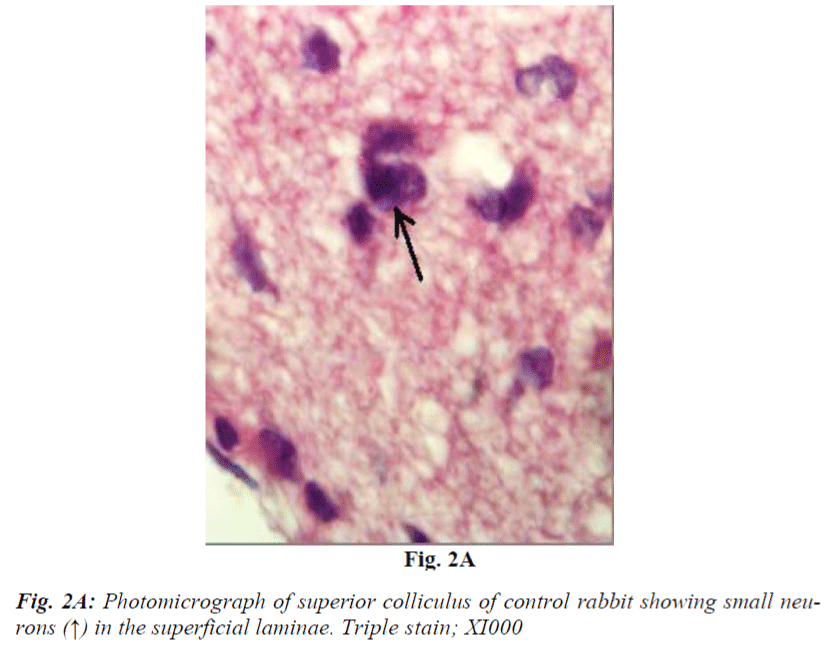 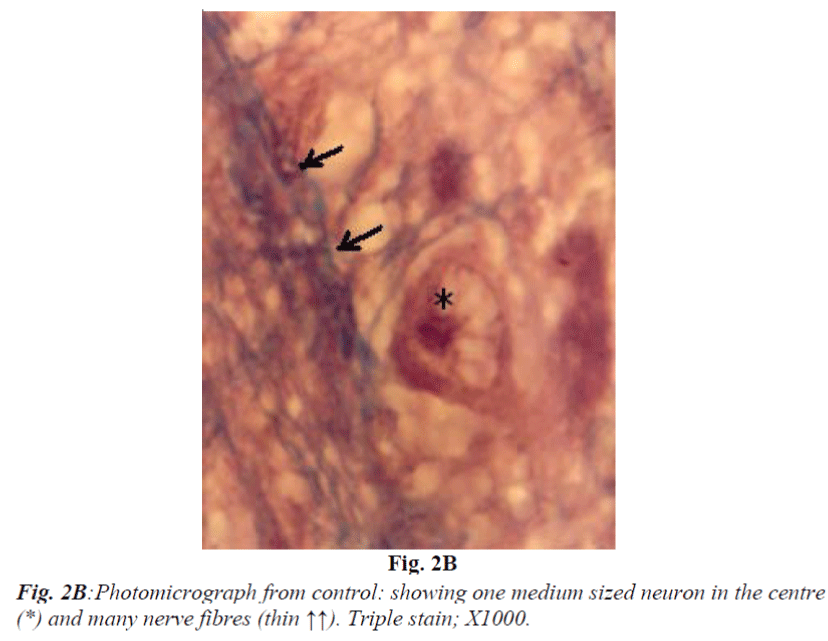 Fig. 2B: Photomicrograph from control: showing one medium sized neuron in the centre (*) and many nerve fibres (thin ↑↑). Triple stain; X1000.

Laminae I and II do not reveal obvious change at 2 weeks. At 1 month they show mild vacuolation which was found to increase in size and number with progressive duration of survival and eventually became marked at 4 months (Fig. 3A). It is associated with increasing number of cells that are morphologically comparable to small neurons and glia cells. Deeper laminae also show frequent occurrence of perineuronal spaces. Myelinated fibres which are normally arranged in well-defined fascicles, also undergo degenerative changes in the from of fascicular disorganization, fragmentation and ovoid formation (Fig. 3B). Some of the medium sized neurons in samples from 1 month onwards survival revealed disorganization of Nissl substance in the form of detachment of Nissl substance from the neuronal cell membrane (Fig. 3C) in association with aggregation of glia cells, while others showed minimal affects of enucleation (Fig. 3D). 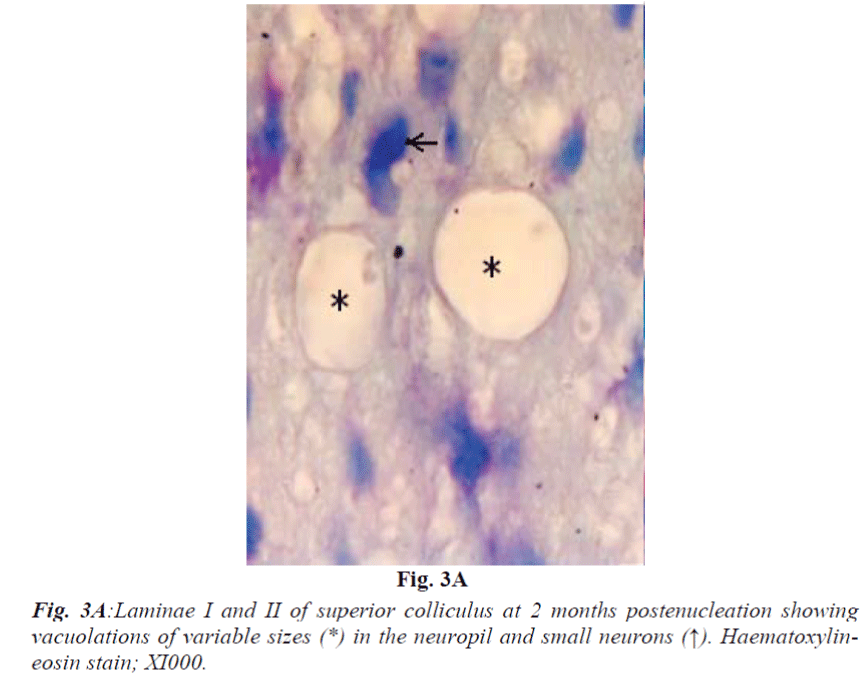 Fig. 3A: Laminae I and II of superior colliculus at 2 months postenucleation showing vacuolations of variable sizes (*) in the neuropil and small neurons (↑). Haematoxylineosin stain; XI000. 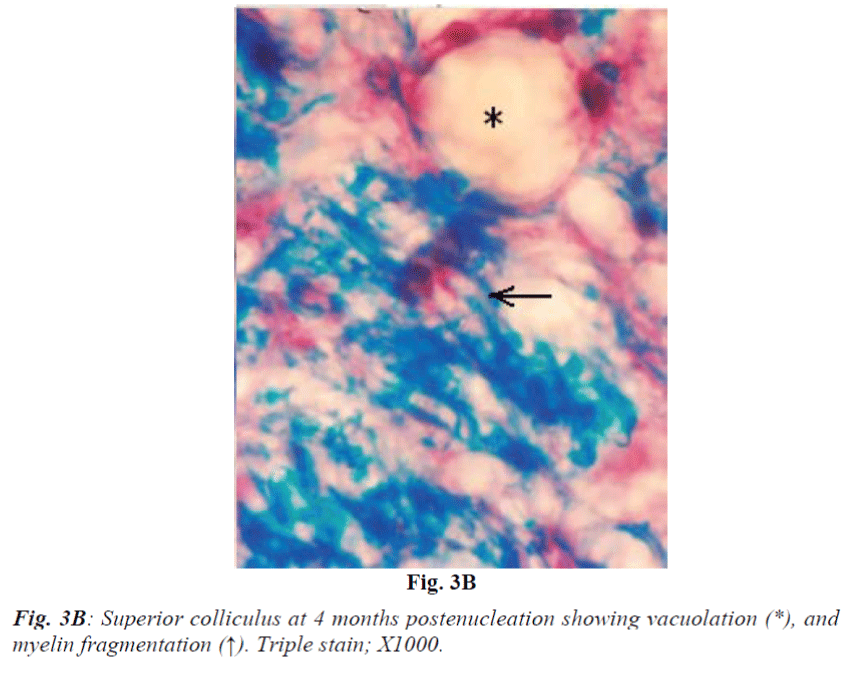 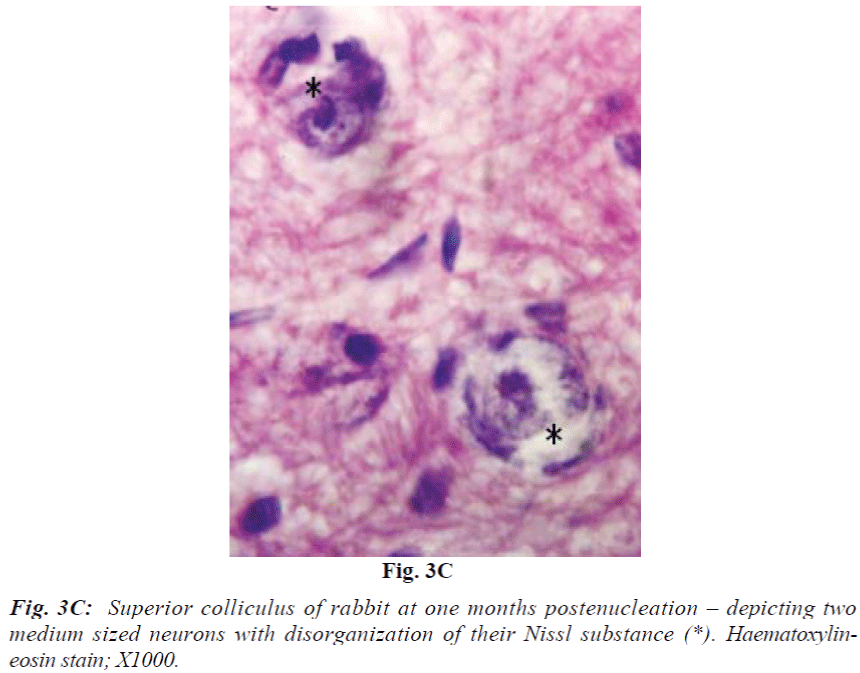 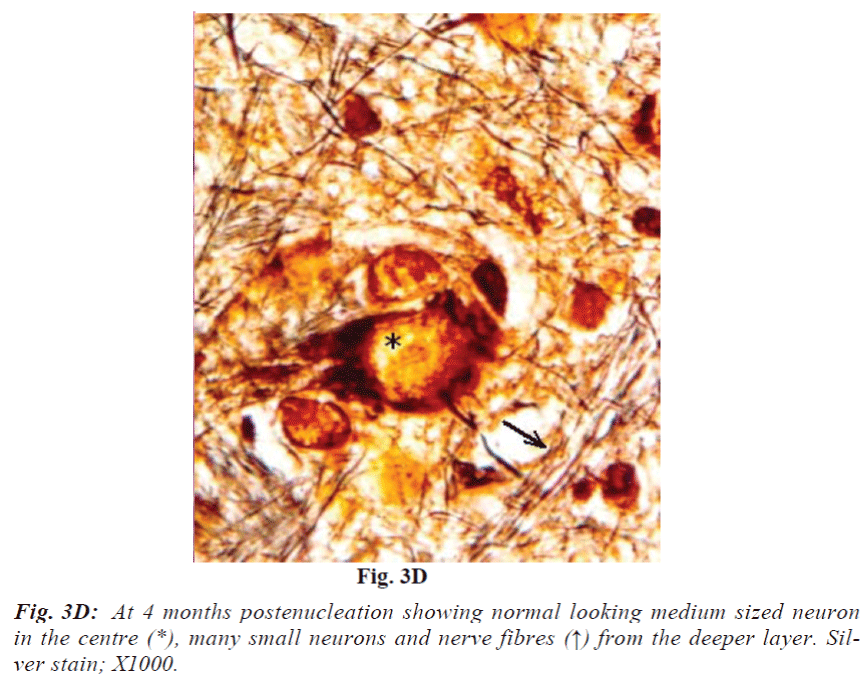 Studies dealing with the effects of enucleation in neonates and adult animal [17,18,19,20] have shown changes ranging from an overall shrinkage of the retinorecipient visual center to neuronal shrinkage; neuronal death, decrease neuronal and synaptic density and synapse-to-neuron ratio. Altered neurochemical expressions were also reported by some workers [21]. In the present study observation of mild shrinkage of superior colliculus after chronic deafferentation (4 months) is in agreement with the observation reported in rats [22]. The extent and severity of deafferentation-induced anterograde degeneration was found to be as expected i.e., more pronounced in the contralateral side in accordance with the number of fibres it receives from the retina. In general it was noticed that there was no demonstrable morphological change after 2 weeks of survival while it was very much obvious after 4 months duration. None of the experimental samples revealed cell bearing characteristic features of dead cells. Vacuolations observed in the colliculi of experimental animals are likely to be either due to loss of neuropil and neuronal death or to some extent due to oedema of myelin sheath which are comparable to changes reported in the optic nerve and lateral geniculate nucleus of rabbits [17,18]. Strikingly conspicuous absence of neuronal cell death debris may be the result of prompt cleaning response of glial cells. Observations on some neurons from deep layers having features analogous to the oedematous neuronal cell body, very akin to postaxotomy perikaryonal response (Fig. 3D), appear unlikely to be an artifact produced by “shattering effects” of histological procedures. Involvement of superficial layers in the present study is very much in agreement with those reported in the adult rats [22]. Our findings on deeper laminae of superior colliculi are correlated well with those reported in adult rat superior colliculus [23]. Relatively mild involvement of the deep layers of the colliculus as compared to superficial ones observed in the present study may be due to the following reasons - (i) superficial layers get direct retinal input hence reveal obvious changes after deafferentation. Deep layers do not receive direct retinal inputs, instead they get afferents from many primary retinorecipient centres e.g., superficial layers of superior colliculus, and visual cortex and hence they show only minimal changes - a case of late trans-synaptic degeneration. (ii) Loss of synaptic contacts and consequent inactivation of collicular neurons. (iii) Loss of retinal ganglion cell-released trophic factors which is considered essential for the survival of superior collicular neurons. Thus, survival of the neurons of superior colliculus depends on the extent of their dependence on the retinal ganglion cell axons for their activation as well as trophic factors. From above it appears that the superficial layers showing more changes were heavily dependent on the retinal inputs as compared to the deeper layers. It is concluded that though postenucleation changes in different laminae of adult superior colliculus are neither dramatic at any point of time during study nor various morphological changes can be rigidly matched with the post-lesion time frame, yet in general it reveals progressive increase in the degenerative changes with duration of post-enucleation survival period in accordance to their extent of dependence on the retinal inputs.