Effects of monocular enucleation on the lateral geniculate nucleus (LGN) of rabbit: A qualitative light and electron microscopic study

The lateral geniculate nucleus (LGN) is the thalamic relay center in the visual pathway. Deafferentation induced by different methods is known to result into nerve fibre and nerve cell degeneration. However, information about the minimum time required for such changes to appear is rather scanty. In the present study 20 adult rabbits received monocular enucleation and the non-enucleates served as controls. The operated animals survived from 12h to 3m before they were sacrificed. The lateral geniculate nuclei from the perfusion fixed animals were processed for light and electron microscopic observations. It was found that 24h was the least time required for detectable morphological changes to appear. The light microscopic changes were in the form of swelling of nerve fibres, occurrence of minute holes followed by neuronal death. The spared neurons revealed hypertrophy and gliocytes showed hyperplasia. Electron microscopy revealed loosening of myelin lamellae, intramyelinic oedema, periaxonal vacuolation and electron-dense degeneration of the nerve fibres. With increasing duration these changes also progressed in number, size and morphology followed by neuronal death, glial cell hyperplasia and hypertrophy. Presynaptic axon terminals degenerated earlier than post-synaptic profiles. Conclusions: (i) Minimum time required for microscopic changes to appear was just 24h. (ii) Neurons heavily dependent on retinal inputs degenerated and the least dependent ones hypertrophied. (iii) All progressive degenerative changes could not be rigidly placed in temporal sequence.

The lateral geniculate nucleus (LGN) occupies a pivotal position in the visual pathway between retina and the visual cortex. It consists of six laminae in man and rhesus monkey, three in cat and poorly defined two laminae in rabbit. LGN receives afferent inputs from the retina, visual cortex and many other subcortical centers. The retinal inputs to LGN are predominantly from the contralateral retina. Ocular enucleation in experimental animals leads to transneuronal degeneration [1,2,3], and reduction in parvalbumin [3] calbindin [4,5], expression of calbindin and parvalbumin [6] as well as density of highly immunoreactive neurons [7]. It is also associated with increase of substance-P immunoreactivity [8], gilal fibrillary acidic protein [9], 160 kd neurofilament [10]. Deprivation of light for just 48h has been shown to cause apoptotic cell death [11]. The morphological substrate for many of the above findings after short-term depri-vation and deafferentation are not clearly defined. The present study was undertaken to find out both early and late qualitative microscopic changes in the contralateral LGN of rabbit after ocular enucleation.

Gross. The contralateral LGN remained akin to ipsilateral and control LGN up to 2m. At 3m, it showed apparent shrinkage.

Samples at 12 h revealed no demonstrable change. After 24h, the changes were in the form of generalized swelling of nerve fibres covering the external surface of LGN, with occasional holes or minute cavities. In the samples from the subsequent periods these features became more frequent and prominent. At 3m postenucleation (Fig. 1) the myelin degeneration could be appreciated even at a very low magnification. At higher magnification, LGN in its superficial part showed pleomorphic cavities, myelin degeneration, fragmentation and ovoid formation. Multi-ple degenerating myelinated nerve fibres projected in the large cavities (Fig. 2A). The deeper part of the LGN consisted of geniculocortical neurons characterized by large euchromatic nucleus, prominent nucleolus, and large cell body containing Nissl substance. Samples from 1 month and onwards, showed vacuolation and cell death. Dead cell (Fig. 2B) was characterized by condensed, darkly stained nucleus with pale cytoplasm devoid of organelles. The saved neurons were either similar to controls or were hypertrophied (Fig. 2C). The gliocytes outnumbered neurons more prominently in experimental groups. These cells were characterized by small heterochromatic nucleus having darkly stained thin rim of cytoplasm.

It showed ever-growing periaxonal oedema and vacuolations. These vacuolations (Fig. 3A) began within the myelin sheath or between the myelin and the axon. The myelin split and there developed intramyelinic accumulation of amorphous and occasionally polymorphic electron dense material. The degenerating axon was pushed to an eccentric position. The neurons not affected by enucleation were comparable to controls (Fig. 3B) had large vesicular nucleus, prominent nucleolus and perikaryon was full of organelles. The glial cells were characterized by irregular heterochromatic nucleus and thin rim of cytoplasm (Fig. 3C) and were occasionally associated with degeneration debris. Some glial cells located in the vicinity of a dead cell became hypertrophied. The dead cell (Fig. 3C) was characterized by a shrunken, heterochromatic nucleus, clumps of chromatin and poorly defined nuclear membrane as well as perikaryon devoid of organelles. Often the dead cells were associated with degenerating terminals (Fig. 3C). The presynaptic terminals showed degenerative changes earlier than the postsynaptic terminals. 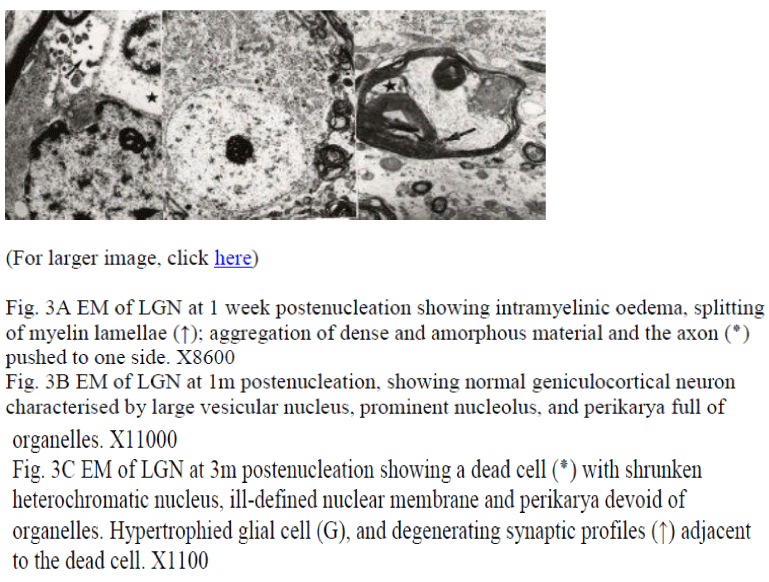 Experimental ocular enucleation isolated the retinal ganglion cells from their axons. This lead to anterograde degeneration of these axons constituting the optic nerve and optic tract right up to the lateral geniculate nucleus [12]. Since the contralateral LGN, received major input [13], this showed the major post-lesional changes. Gross examination finding of reduction in the size of contralateral LGN at 3m was in agreement with the observation of 40% reduction in the contralateral retinorecepient region of superior colliculus in enucleated rats [14]. The degenerative change was demonstrated just after 24h which was a bit earlier than 30h [15] and 48h [16] but comparable to those found in the ipsilateral optic nerve, and contralateral optic tract after enucleation [17]. The vacuolations observed were due to oedema, breaking down of myelin while larger cavities in the advancing enucleates suggested complete dissolution of myelin. The deeper cell-rich region showed less number of vacuolations, and when present they were either due to complete dissolution of affected fibres or resorption of dead cells. The dead cells noticed in present study had light microscopic features comparable to apoptotic cells noticed in human LGN [18] during development. Demonstration of degeneration product up to 3m was possible because the process of degeneration and removal of degeneration debris is known to be slower in central nervous system as compared to peripheral nervous system [19]. Con-comitant presence of both dead (denervated) and hypertrophied (spared) cells was in partial agreement with some [1,2] studies.

The observation that the myelin sheaths usually do not collapse but become dilated was in agreement with some [19], and in partial agreement with other [20], suggesting that the myelin sheaths collapse and lamellae become loose but the sheath may remain intact up to 2m. The ultrastructural features of dead cell observed were comparable to those of apoptotic cells noticed in developing human LGN [18]. Presence of hypertrophied neurons in conjunction with the dead cells suggested hypertrophied cell’s involvement in the formation of new synaptic contacts. However, the spared hypertrophied cells were not associated with free postsynaptic densities as noticed during normal course of synaptogenesis during foetal life [21] as well as during ‘de novo’ synapse formation after decortication-induced deafferentation in in adults [22,23]. This probably reflected limited morphogentic potentiality of adult brain to develop new contacts. The features of degenerating terminals in terms of loss of definition of organelles, aggregation of dense bodies, degeneration of mitochondria and collection of neurofilaments matched with some [24] studies. The glial cells and pericytes located in close vicinity of the dengenerating cells and terminals in this study suggested that astrocytes and microglial cells take part in removal of degeneration debris [25,26]. Some workers [20] are of the view that even pericytes have the properties of macrophages and have potential to actually develop and prolif-erate into macrophages. It was concluded that: (i) While morphological changes may be detected as early as 24h after lesion, the degeneration products remained for months together. (ii) Enucleation induces death of certain LGN neurons and compensatory hypertrophy of others. (iii) Various degenerative changes observed could not be rigidly put in a rigid temporal sequence.