Human machine interface is the main solution in the field of rehabilitation. This paper uses the eye signal to command the computer to perform tasks according to programmed application, different applications could be programmed and developed to carry out daily tasks and entertainment like reading, writing and navigating. A new simple proposed EOG system is used to capture the eye signal effectively. An algorithm also is developed and used to extract information from captured EOG using LabVIEW software. A programmed eye book reader application is used to test the performance of the system. The results of the new hardware and used algorithm are approved their ability to be used with high efficiency and accuracy to control different applications using EOG signals.

Spinal cord injuries are considered the root cause of Paraplegia and Quadriplegia. Quadriplegia causes loss of control over much of the body from shoulders down [1]. Statistics recorded the number of people in the U.S. who are alive in 2014 and have SCI has been estimated to be approximately 276 ,000 persons [2]. In order to improve the life of those disabled peoples, a lot of researches have been done. Brain signals - Electroencephalogram (EEG)- are measured, analyzed and used to help the patients to live independent life [3-7]. Muscle signals -Electromyography (EMG)- are also used in other projects [4,8,9]. Another research used the voice to control the outside world and others used the visual information from the patient [10-11]. All previous techniques faces some problems in practical application such as many connections of EEG, the required connection place of EMG and the consumed time in processing. This work based on eye movement and the resulted signal from these movements -Electroocculography (EOG)- for the following reasons; the easy to construct using surface electrodes , good face access , low cost , light in weight , good accuracy and resolution, great range of eye displacement and easy to work in real time [12,13]. Smooth eye movement, vestibular ocular movement, vergence eye movement, optokinetic eye movement and the saccadic eye movement are the five eye movements which are easy to be measured [14]. Saccadic eye movement is the used type in this work because of its simplicity to control. Also the horizontal eye movements are only used for further simplification because they primarily involve only two muscles of each eye [14,15].

This work aims to extract four different commands from the patient saccadic horizontal eye movement with simple acquisition system, easy electrodes installation and using simple effective algorithm. The hardware used would be based on national instrument NI products. General books reading system would be the direct application of this work.

EOG signal characterized by amplitude range from 0.5 to3.5 mV and frequency range from Dc to 100 HZ, the EOG signal is originated due to the large presence of electrically active neurons in the retina compared to the front of the eye, this difference generate an electrical potential across the eye, making it acts like a weak battery with positive potential at the front of the anterior segment-cornea-and negative potential at the back-retina-[16-19]. Figure 1 shows the standard EOG signal with respect to eye gaze direction. 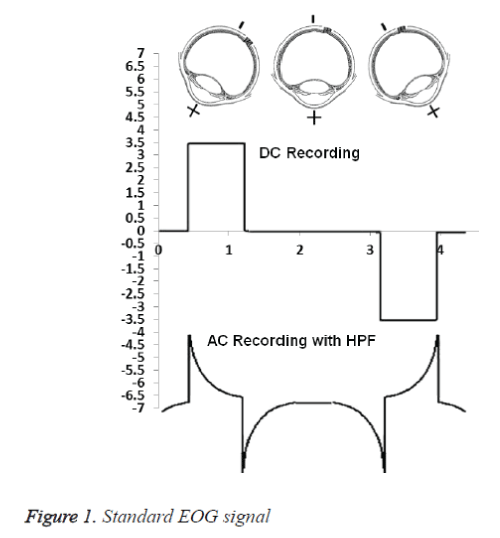 EOG signal is acquired by placing two electrodes to the right and left of the outer canthi (1, 2) as shown in Figure 2. Reference electrode is placed on the forehead or on other place of the body (3). 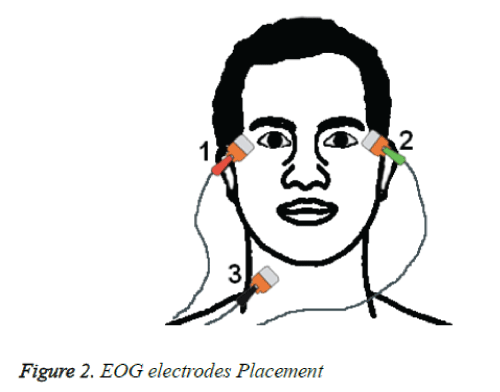 Signal from electrodes is passed through EOG conditioning circuit in order to amplify the signal and remove unwanted artifacts. Circuit is based on EKG circuit that achieves the required gain and frequency response. Circuit with overall gain 1000 and with bandwidth from 1Hz to 60 Hz, Figure 3 shows the frequency response of the circuit. Processed signal out from the circuit is then transferred to notebook through MyDAQ device. MyDAQ analog input have specifications of 16 bits ADC resolution, 200 KS/s sampling rate, ±10 V amplitude range and with passband range from DC to 400 kHz, for more information see appendix [20]. Reception and processing of the acquired signal is done using LabVIEW software. Figure 4 shows the overall system including the electrodes, conditioning circuit, MyDAQ and software. 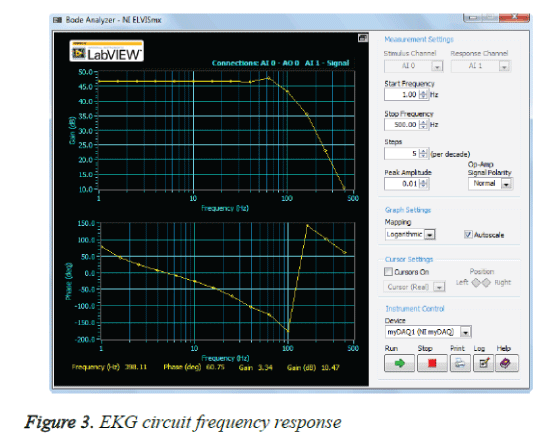 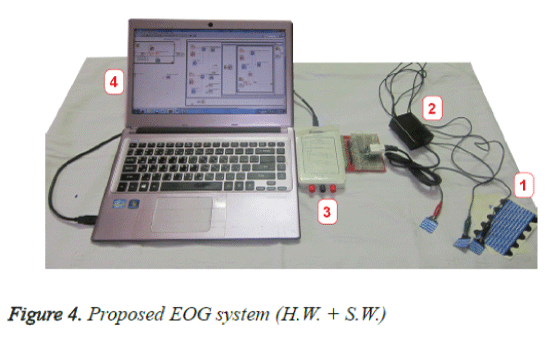 Algorithm is Built based on the shape of acquired signal as mentioned in figure 1. Four easy commands could be generated by the user's eye depending on eye movement direction and the time of return. Two levels detection with signal direction for each direction are used to distinguish between right and left eye movement as shown in figure 5. 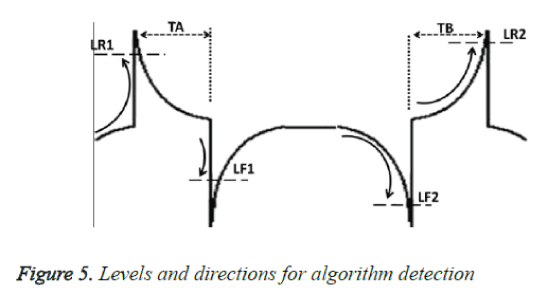 Also the following equations could be used to describe the relation between selected commands and captures signal S:

Where LR1, LR2 levels are in the positive side of the signal and LF1, LF2 levels are is the negative side as shown in Figure 5, these levels are selected based on real-time normalized EOG signal. Proposed algorithm is applied on this work according to the flowchart shown in figure 6, signal processing is done on the acquired signal in order to detect one of the desired four commands. Processing is started with signal normalization followed by detecting the first level after that the second level is also detected, selecting the command is done based on time period between level 1 and level 2. The time period is controllable period by trained user, training could be done in less than one time hour. ,od accuracy and resolution ppl. 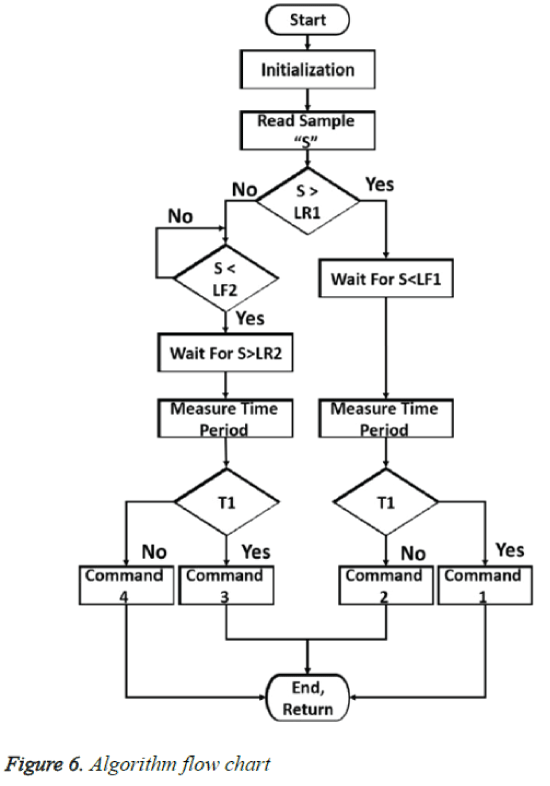 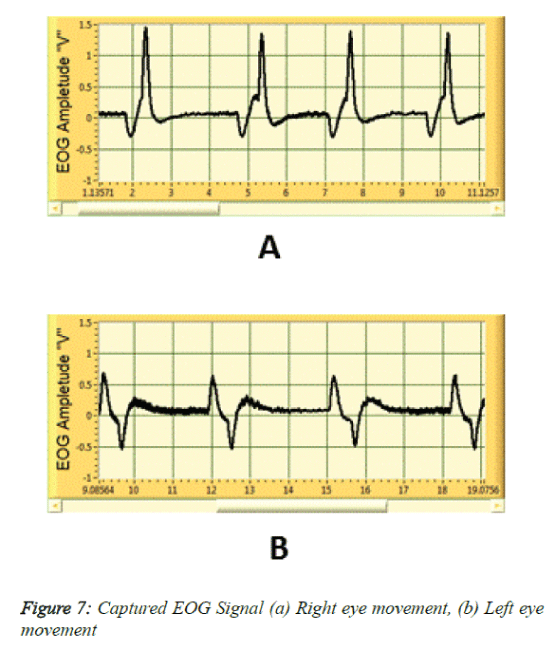 From the captured signal it is clear that; the right gaze signal could be classified by only one level with value 1V as well as the left could be determined by the level with value -0.45V. According to the proposed eye gaze classification algorithm and captured signal it was so easy to control any application controlled by two or four commands. The proposed application is shown in figure 8. The application is general eye book reading system which enables any one to control the navigation through the book pages. 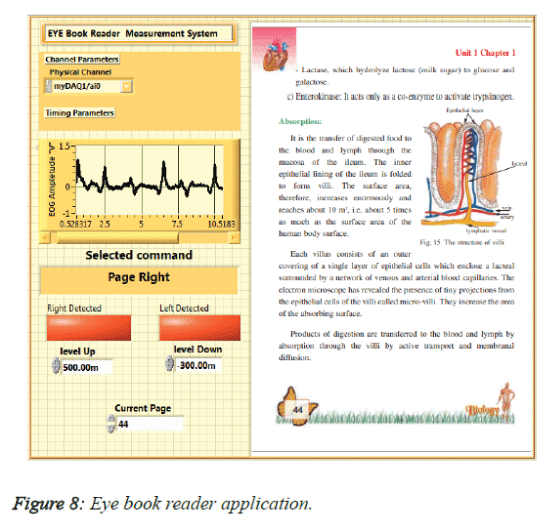 This research is aimed to develop a usable, low cost assistive system for disabled peoples. Work presented a new EOG capturing system based on effective National Instruments hardware and software. The system enables the handicapped particularly who can control only their eye gaze directions to live more independent lives. The system could be used easily because of the little effort required for eye movements as well as the simplicity of system installation and easy to plug. Proposed algorithm approved its efficiency to detect the commands generated by the user's eye signals. The programmed algorithm has demonstrated that it can be relied upon, as it less time consuming over other algorithms like neural network which take large time in calculations as well as the high efficiency to detect the desired commands. An application is also programmed to enable disabled people to control the reading of books.